The Rotax 912 and 914 aircraft engines are a known quantity-with more than 15,000 in the field, they qualify as having substantial field experience. They’re light and, when properly maintained, quite durable. One thing they’re not is immaculately fuel efficient. Sure, the fuel flows are modest, but they’re modestly powerful engines. 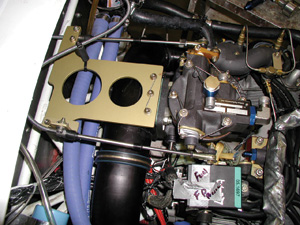 The heart of the system is the servo fuel controller, just ahead of the gold-anodized bracket. It provides all of the fuel metering plus a manual mixture control.

What holds the 912/914 back? To some extent, the induction system. All versions are fed a fuel-and-air mixture through a pair of Bing carburetors. Motorcyclists who have owned earlier air-cooled BMWs will recognize these so-called constant-velocity carburetors. Though the Rotax version is not exactly the same as the motorcycle iteration, the concept is the same. To avoid the need for a mixture control, the Bing carburetor self-adjusts the mixture via a vacuum-operated cylindrical slide that moves up and down in front of the throttle plate. Its not by engine vacuum, which is highest at idle, but an inverse of that; in this sense, the slide rises out of the way in response to high manifold pressure (low vacuum) and mass airflow through the induction system. Attached to the slide is a tapered needle that penetrates the main fuel-metering jet. As airflow increases, the slide moves up and the needle ascends from the main jet, increasing fuel flow as it goes.

This scheme works well for most operators, but the system generally goes rich at high altitude, meaning the engine is consuming more fuel than necessary. Plus there are compromises; it might be beneficial to run the engine richer at low altitude and high power, and leaner at lower power settings and high altitude, which the system currently cant do.

You know Don Rivera as the wide-open throttle at Airflow Performance, maker of Experimental-class injection systems. Airflow Performances systems are widely used on Lycoming and clone engines found in homebuilts, plus other applications where nothing off the shelf will quite do. (The company’s FM-400 system can feed 400- to 800-horsepower engines.)

Now Rivera and company have installed a new system on a Rotax 912, and the performance gains are promising. The test aircraft is a Just Aircraft Highlander owned by Steve Collins. As we went to press, Collins had 70 flight hours on the system. According to Rivera, the Rotax has seen power increases of 8% to 13%. He acknowledged that the increased max power comes with a bit more fuel consumption, as you would expect. However, because the AFP system employs a mixture control, there’s a 6% improvement in cruise fuel consumption. 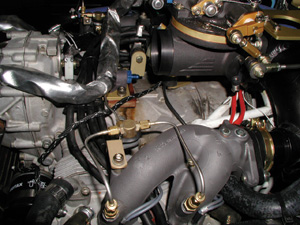 Rivera admits that the Highlander Airflow Performance installation is a test, but the results are so encouraging that hes looking for four or five other Highlander owners who are willing to buy kits. Since we have to fabricate the intake plenum and manifold, it has not been exactly cost effective building the systems one at a time, says Rivera. We have built three other systems like this.

The Airflow Performance system used on the Rotax engine follows the basic outline of the company’s other offerings. There is a single throttle body assembly that also includes a fuel servo. The servo converts ram-air pressure inside the throttle-body venturi to a metering signal that influences fuel flow. In short, the more air passing though the throttle body, the more fuel goes through the system. The throttle body/servo sits between fuel pumps and a fuel distributor that takes fuel to each of the Rotaxs four cylinders.

The Airflow Performance fuel-injection system injects fuel under pressure through calibrated nozzles at the intake port. Fuel-injection systems are always free of carburetor throat icing. Another advantage involves carb synchronization, which was required with the twin Bings but is not needed with the single-throttle AFP arrangement.

On the Highlander, as with virtually all Rotax 912 installations, the Bing carburetor air intakes face aft and mount to an air box assembly. Some Rotax installations use individual pod type air filters connected right to the carburetors. The carburetors then bolt directly to a cast intake manifold on each side of the engine, each manifolds Y splitting the fuel-air mixture before routing it to the intake ports of the left side or right side cylinder-head pairs.

Rivera reengineered the installation on the Highlander by reversing the orientation of the induction air inlet on his FM-100 fuel module so that the inlet air opening points forward. Air is filtered through a single K&N-type filter. A plenum that looks a lot like the original induction airbox was fabricated to connect the exit side of the fuel controller to the original intake manifolds. Two threaded bosses were welded to each intake manifold. The bosses are positioned adjacent to the cylinder intake valves and deliver metered fuel from the controller to each cylinder. 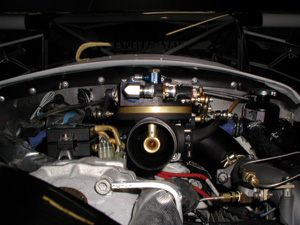 Offset to the pilots side, the FM-100 fuel controller/servo breathes through a K&N air filter. The gold bullet-shaped item inside the black intake throat translates airflow to a fuel-control signal.

About Those Fuel Pumps

The Collins Highlander installation required installation of a surge tank between the two wing fuel tanks and the engine. This tank, gravity fed from the main tanks, was installed at the aft lower end of the baggage compartment. It acts as a single fuel-supply reservoir, which simplifies fuel-system plumbing and serves as the return point for fuel that is routed back from the servo. This departs from normal Airflow Performance practice, where the only return fuel comes from a so-called purge valve used prior to a hot-engine start. In this case, Rivera found that allowing fuel to circulate through the unmetered part of the controller eliminated vapor-lock concerns.

The Collins Highlander installation was completed using a standard Airflow Performance dual electric fuel pump package to supply the 20- to 25-psi fuel pressures required and to provide system redundancy. Were looking at installing an engine-driven fuel pump that would eliminate all electrical requirement to run the engine, says Rivera. The standard Rotax pump is not up to the needs of the AFP system. 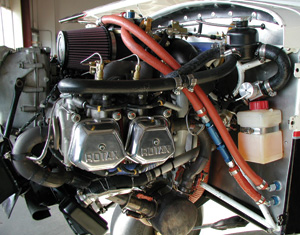 Additional fuel lines are required with the Airflow Performance installation, including a return line for excess fuel. This sub-system keeps the engine-compartment fuel cooler and prevents vapor lock.

Rivera believes that replacing the Bing carburetors will be a popular Rotax engine modification. His plan to install his fuel-injection systems on additional Highlander aircraft will help him fine-tune and refine the installation by providing additional engine performance data points.

Rivera said that the mechanical multi-point fuel-injection system for the Rotax 912 is priced at $3600. This includes new parts such as the fuel control, intake plenum, injector nozzles, nozzle lines and brackets, modified intake manifolds, dual electric fuel pumps, fuel-pressure relief valve, fuel filter, air filter, assorted other parts to complete the installation as well as installation and service manuals. He firmly believes that fuel injection is safer than carburetion and, in this case, wrests more power from the Rotax 912-yet is more efficient in cruise. Safer and more efficient? Who can argue with that?

Vic Syracuse - August 21, 2014
0
I promised I would cover condition inspections in a future article, and having just...

Souls On Board: Two