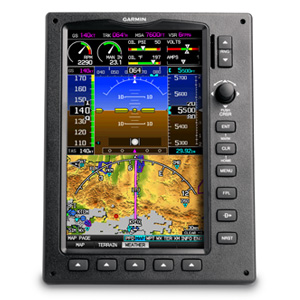 The first news from the US. Sport Aviation Expo in Sebring is that Garmin has expanded the G3X EFIS capabilities with EIS (engine monitoring) and a dedicated autopilot module. According to Garmin, “The EIS and autopilot are designed specifically for the G3X and are an affordable way for experimental and light sport aircraft (LSA) pilots to bring Garmin integration and quality into their cockpit. The sensor kits are expected to be available for all popular Lycoming, Continental, Rotax, and Jabiru engines in February 2010.”

According to Garmin, “The added EIS software capability is expected to be available in February to all current G3X customers through a free software download. The G3X EIS software allows user customization of engine gauges, color bands, and audible/visual alerts, and supports the following sensor types:

In addition, Garmin has announced a link-up with TruTrak Flight Systems to provide a dedicated external autopilot that will work directly with the G3X. It will get “G1000-like features…customers who select the TruTrak GX Pilot autopilot, which has been designed to integrate seamlessly with the G3X, will enjoy advanced autopilot features that can be operated right from the PFD. Using controls and status indications derived from Garmin’s certified GFC 700, the G3X autopilot interface implements sophisticated flight control modes including altitude preselect and capture, heading hold, GPS navigation with turn anticipation, and coupled VNAV descents.”

KITPLANES® editor in chief, Marc Cook, has been flying with the G3X suite since last summer, and has tested some of the new software. Here’s a sneak peek of the update story that will appear in the April issue of KITPLANES:

In many ways, the G3X system resembles the G1000, only simplified. It relies on individual screen modules, called GDU (shorthand, “display units”) that are linked to the rest of your avionics system with serial connections, both RS-232 (three on each GDU and three on the GSU, or service unit) and ARINC 429 (four on the GSU). Note that the G3X will not support old-school analog connections to nav/coms. Each GDU is linked to a multipurpose module called a GSU 37 through a CAN bus system—a three-wire versatile network.

If the GDU is the face of the system, the GSU is the brain. Inside this 3.5-pound aluminum cube resides the primary ADAHRS unit. The solid-state gyros are rated for 360° of pitch and bank maneuverability at a maximum rotational rate of approximately 200°/second. Pitot-static measuring sensors are there, too, though the magnetic sensor (magnetometer) is located remotely, as is the outside-air-temp probe.

As the system is currently configured, there are provisions for only one GSU at a time. This follows common practice among the G1000 installations, where single-engine aircraft typically have one set of ADAHRS sensors and rely on other means such as electronic or pneumatic flight instruments for backup. That the components inside the GSU and the software running them are, if not exactly like the certified systems, very close to certified spec should help bolster confidence. What’s more, in my testing of the G3X starting in the summer of 2009, the basic attitude/pitot-static performance has been absolutely rock-solid reliable. Not a glitch, not a hitch…nothing.

While the G3X is underpinned by one GSU module, it can support up to three display units. In fact, when I asked the system’s designers about the G3X’s early development it became clear that they felt the minimum system really should have two screens. This philosophy closely shadows G1000/G600 concepts where a main screen (the primary flight display, or PFD) always carries the important attitude information including a horizontal situation indicator (HSI) in the lower part of the screen.

The G3X’s basic presentation is absolutely top notch. Sometimes it’s the little things, like the shape of the vertical-speed arrow or the thickness of the magenta line that follows the VSI up or down from zero. The heading and altitude bugs are big and bold. The overall operating logic is quite sound. Having multiple single-function keys along the right side of the display, backed up by five soft keys at the bottom, helps reduce the number of times you push a button or turn a knob to get what you want.

Garmin fully expects the G3X to add more features as it matures. The autopilot additions are next, to be followed by the full engine monitoring package. All the company needs to establish is the cost for the sensor pack, which will all be hooked in through the GSU module. (If you’re thinking of having the G3X do your engine monitoring, carefully consider where you’ll put the GSU to reduce the length of the many engine-related wires.) Synthetic vision should not be ruled out, and gaining some form of ADS-B connectivity should be assumed; right now, the G3X will accept TIS traffic data from a GTX 330 transponder (and offers altitude encoding to any serial-capable transponder).

Currently, a single-screen system (with the GSU box, magnetometer and OAT probe) starts at $9995; add XM to that and it’s $10,695. A true dual-screen system is $14,995, and any additional display units run $3295. Garmin has not yet set a price on the engine-probe package, but it’s likely to be around $1000 including fuel flow. Garmin’s management knows the G3X arrives near the top of this market segment, but is betting that the company’s experience and reputation will carry the day. So far, from a hardware and software standpoint, the G3X has more than met expectations.

For more information, visit the G3X page on Garmin.com or the G3X Minisite.

Ed Wischmeyer - September 18, 2008
0
Oshkosh AirVenture gave Ed Wischmeyer the opportunity to look around at the newest ideas in aviation and to think about the larger implications of what he was seeing. He speculates about what works, what doesn't and how manufacturers and consumers alike could make the world of flying a better place.