Last month, we took a look at technical advice, with an emphasis on what to look out for to avoid taking bad advice. This month, we shift our focus to some books and other sources of good and useful information on aerodynamics and airplane design. The list is by no means complete, but it describes several works which I have found useful over the years. 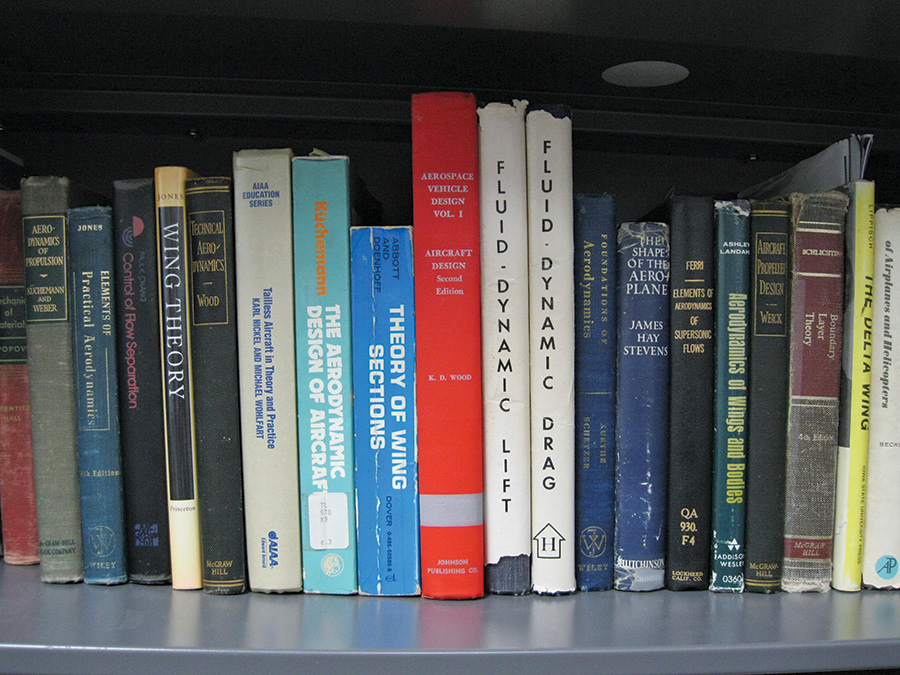 If you are going to experiment with aerodynamics and design, a well-stocked bookshelf is a must.

This book is one of the best all-around engineering texts on airplane design. It covers most of the major aspects of the aerodynamic design of airplanes, starting from simple concepts and working up to the more complex subjects. It was written as a textbook to teach introductory airplane design at the college level. Although it was written a long time ago, this book is still a valuable reference. Physics has not changed, and airplanes still behave the same way.

The style of the book is quite straightforward and most concepts are explained verbally as well as mathematically. Most of the mathematics is algebra rather than calculus, and should be understandable to anyone who passed high school math. The majority of the equations shown in the book are derived from first principles, and the derivations can get a bit confusing to the lay reader. It is still possible to get a lot of good information from the book, even if you do not follow the derivations. Concise formulae are given at the end of each derivation to enable the reader to easily calculate most of the important quantities a designer must determine.

The book discusses performance aerodynamics, stability, and control of airplanes. Even though it was published in 1949, it remains one of the best texts on basic airplane design. Most practicing designers own a copy and refer to it often.

This book deals entirely with lifting surfaces. It covers most of classical airfoil theory, as well as the theory of three-dimensional complete wings. The appendix gives the coordinates and experimentally determined characteristics for a wide variety of NACA airfoils. 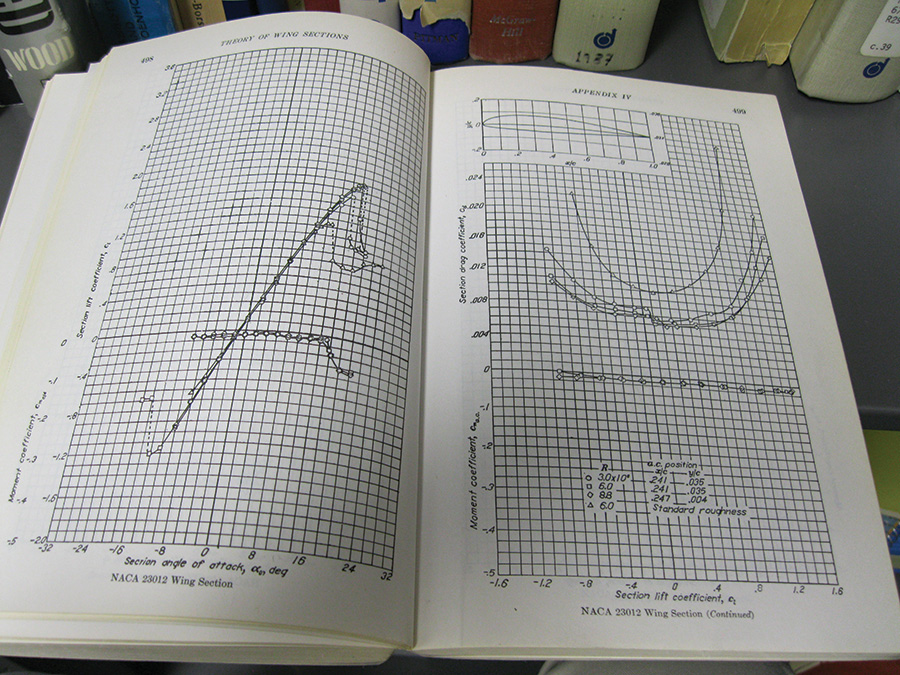 Every good aeronautical engineer has a well-worn copy of Abbott and Von Doenhoff that shows the lift coefficients and drag curves for many NACA airfoils.

Much of this book is highly theoretical, and the mathematics can get complicated. Some chapters are only of interest to the theoretical aerodynamicist, rather than the airplane designer. Despite this, the book is very valuable for the designer because it gives, in easy-to-use form, the methods and formulae for calculating the characteristics of wings. Chapter 1 alone makes this book worth having. In later chapters, the experimentally derived characteristics of airfoils and the effects of thickness, camber, and other aspects of airfoil geometry are discussed in detail. There is also an excellent discussion of high-lift systems, including an extensive table showing the effectiveness of various types of flaps, slats and other high-lift devices at increasing the maximum lift of a wing.

Like Perkins and Hage, Theory of Wing Sections is a must-have book for the practicing designer. It is available from several aviation-oriented mail-order book sellers.

Fluid-Dynamic Drag is a compilation of a vast amount of theoretical and experimental information about aerodynamic drag. Some information on the aerodynamic drag of almost anything, including, believe it or not, the Empire State Building (Page 4-4, Fig. 8) can be found in this book. The experimental data given in the book, although it covers a wide range of subjects, is sketchy in places. Each section, however, ends with an extensive reference list, which will direct the reader to sources of more detailed and extensive information. In most sections, both theory and experimental results are discussed, and the correlation between theory and experiment is explored.

Fluid-Dynamic Drag is a very useful book because it contains enough information on the drag of every conceivable airplane component to allow a designer to do a first-order drag estimate for an entire airplane, using nothing but this book for reference. It is particularly useful when considering the drag of airplane components, and the interference drag caused by the joining of these components. Since it discusses many obscure subjects, as well as the more common ones, it is quite valuable when attempting to determine the drag of an unconventional design. 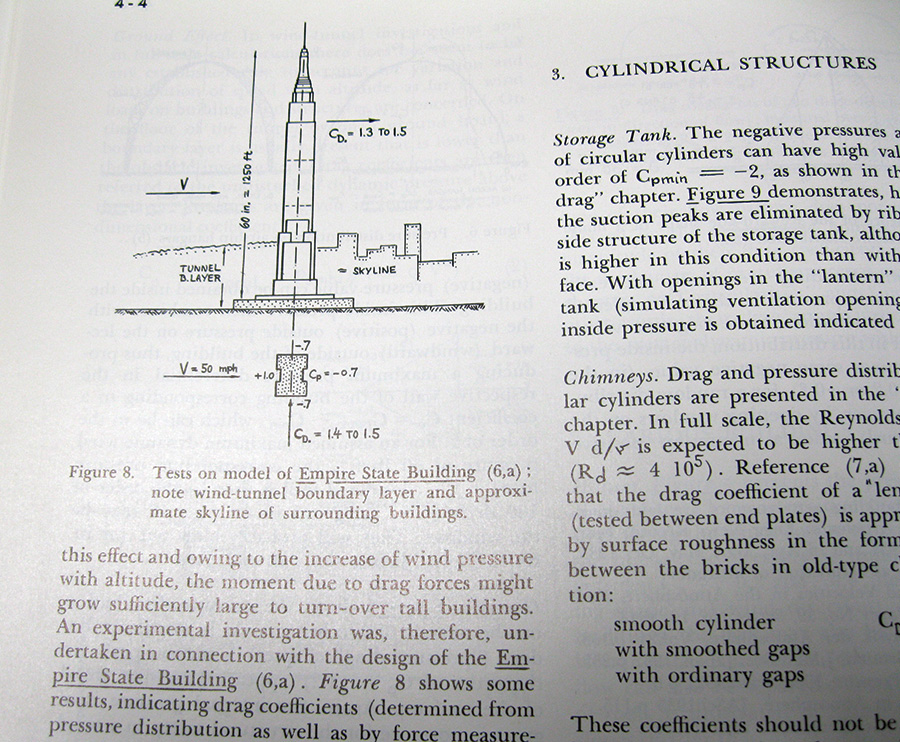 Need to know the drag coefficient of a skyscraper? It’s in the book!

Fluid-Dynamic Lift covers the topics of lift generation, stability and control, and control surface effectiveness in much the same manner as Fluid-Dynamic Lift deals with drag. Like its companion volume, it is a very useful source of basic design information, and the extensive reference lists provide an excellent starting point for detailed research on a given subject. Both volumes of Hoerner’s work are valued and much-used members of my personal library, and I highly recommend then to the prospective designer.

Professor Torenbeek’s book is an excellent text on the complete process of preliminary design of airplanes. In addition to aerodynamics, the book also covers such topics as propulsion, cockpit layout, weight estimation, and many others. It is an easy book to read and understand, and contains a wealth of useful tabular data of many types. I have found the normally hard-to-find weight-breakdown data particularly useful. The book is more recent than some of the other references I have given, and its treatment of the more modern aspects of airplane design is accordingly much better.

I do not know whether this book is easily available in the Unites States (although it is in English), but a university bookstore and some other bookstores should be able to acquire it for you by special order. 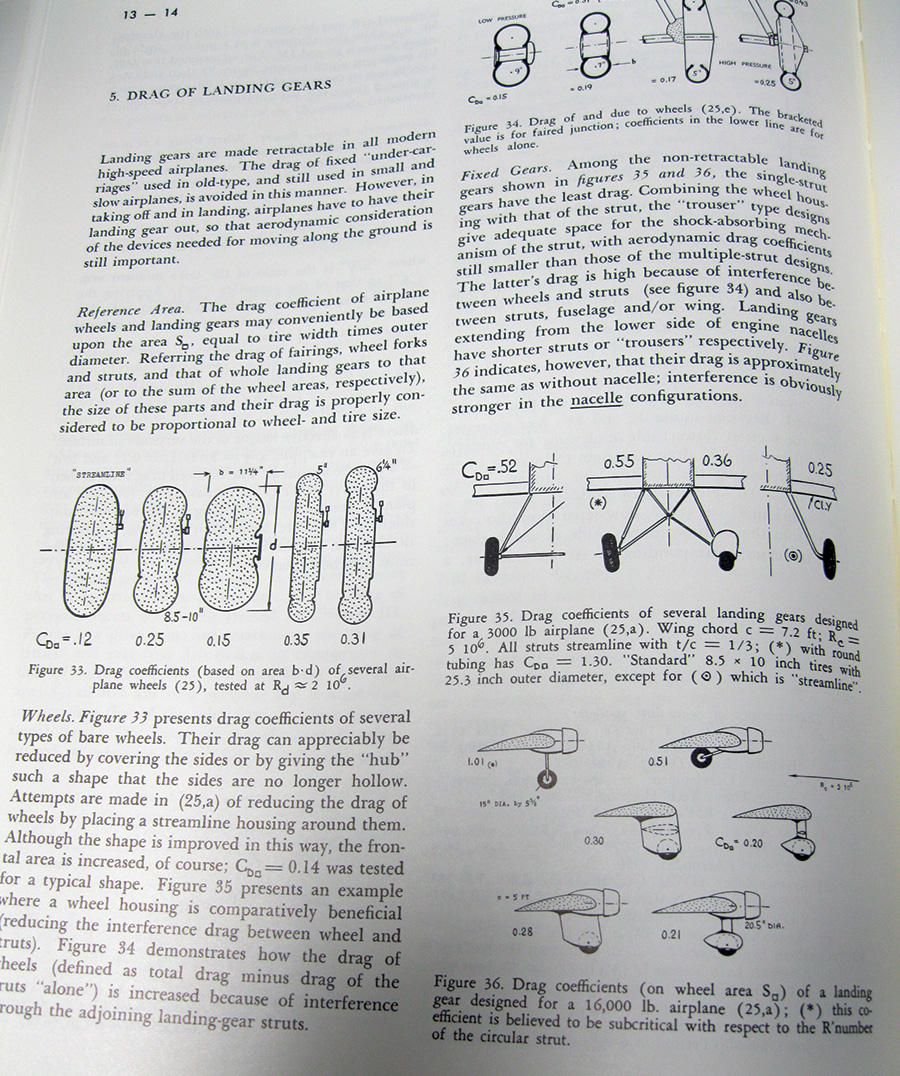 Faired or unfaired, fat or skinny? Tires have drag and the books can tell you how to compute it.

a) General Formulas and Charts for the Calculation of Airplane Performance: W. Bailey Oswald, NACA Report No. 408, 1932.

Although it was written a long time ago, this report is still the basis for the calculation of the performance of propeller-driven airplanes. Most texts are simply echoing Oswald’s work when discussing performance calculation. The report gives formulae and data plotted in the form of charts, which allows the designer to determine most aspects of the performance of an airplane being designed, or to evaluate an existing machine.

This report provides coordinates and aerodynamic characteristics for a wide variety of NACA airfoils including the 6-series laminar sections and the popular 5-digit series.

This report details the results of extensive tests of the NACA 4-digit series of airfoils. Some of these airfoils are still in use today, and this report is the definitive source for data on their characteristics.

All of these NACA reports are available from National Technical Information Service online at: http://ntrs.nasa.gov. 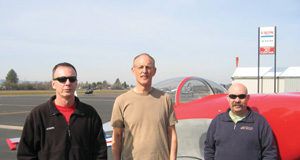