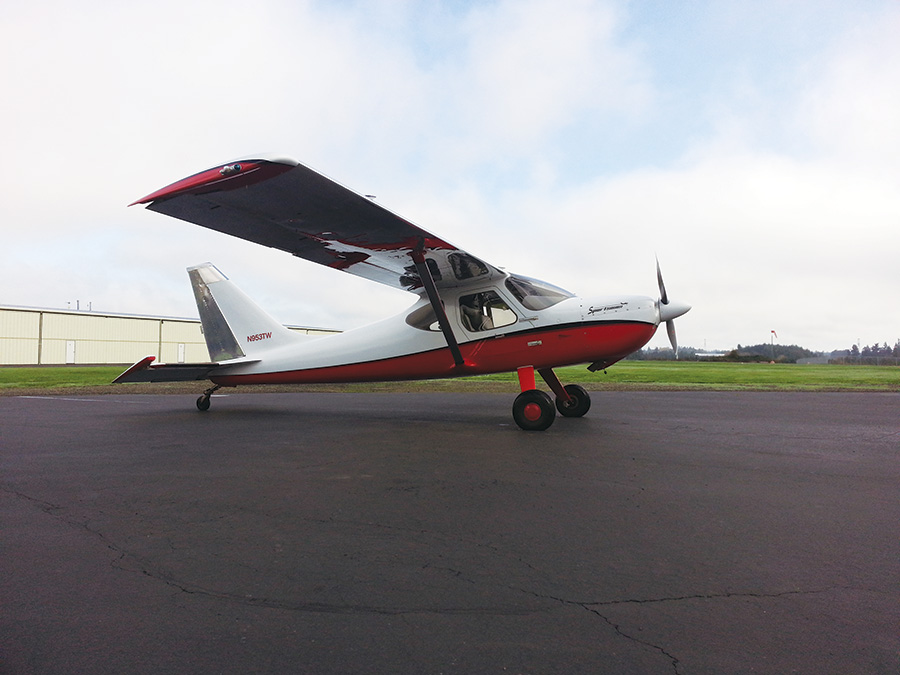 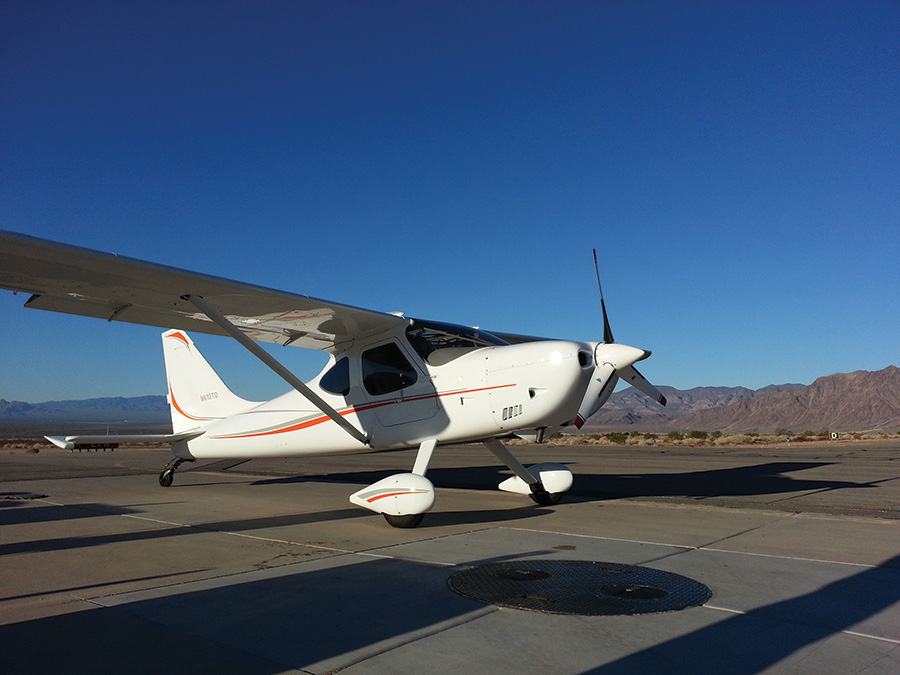 Diesel aircraft engines offer some distinct advantages over the gasoline engines found on nearly all light aircraft. The ability to burn less expensive, more widely available jet or diesel fuel and the thermodynamic efficiency made possible by 18-to-1 compression are tempting reasons to choose diesel power. But what are the tradeoffs? The task of aircraft design is, if nothing else, the art of finding the best compromise between competing requirements. While true in every part of the design process, one of the more foundational decisions the aircraft designer has to make is choosing the engine that best fits the intended use of the aircraft. Motivated by these considerations, I have long wanted to make a real-world performance comparison between an aircraft powered by a Continental Diesel (CD) engine and the same aircraft powered by a Lycoming engine. When I learned that Glasair is now offering the option of diesel power in their Sportsman, I finally saw my opportunity to make a comparison flight test.

The CD-135 and CD-155 engines were developed under the name Thielert and have formerly been known as the Centurion series of engines. These engines are geared, liquid-cooled, four-cylinder, four-stroke turbodiesels equipped with Full Authority Digital Engine Control (FADEC). I have heard folks rave about the fuel economy and smoothness of the CD-135 engines and wanted to find out for myself if they are indeed as easy to operate and run as smoothly as people claim. Do the engines deliver the power and fuel efficiency that their manufacturer claims they do? What is the difference in weight between an aircraft powered by a CD-135 or CD-155 and the same aircraft powered by a gasoline engine? The answers to these questions could be determined by making a test flight in a diesel Sportsman and then repeating the test in a Lycoming-powered Sportsman.

During each flight, we measured the climb rate and cruise speed of each aircraft at varying altitudes. Glide performance and stall speeds were measured to verify the aerodynamic similarity of the two aircraft. This ensured that any variations in performance were due to engine power and not differences in the aircraft themselves. By measuring fuel consumption, the fuel economy of the diesel and gas engines could be compared. By weighing each aircraft, the difference in weight between the two engine installations was deduced. By flying each aircraft with main tanks full and with identical cabin loads, the differences in engine installation weight and fuel weight were reflected in the measured performance.

The data recording EFISs installed in both Sportsman aircraft made it possible to separately fly each aircraft, download the flight data, and determine with reasonable confidence the difference in performance between the two aircraft. Each test flight lasted approximately two and a half hours and consisted of the following:

The Aircraft and Owners

The gas Sportsman is owned by Craig Ellison of Silverton, Oregon, and is powered by a Superior parallel-valve 180-hp carbureted O-360 turning a 74-inch diameter, two-blade Hartzell constant-speed propeller. The engine is equipped with one magneto and a Light Speed electronic ignition. This aircraft turned out to be the ideal choice for the gas-to-diesel comparison because the airframe is completely standard and is likely the lightest Sportsman around. 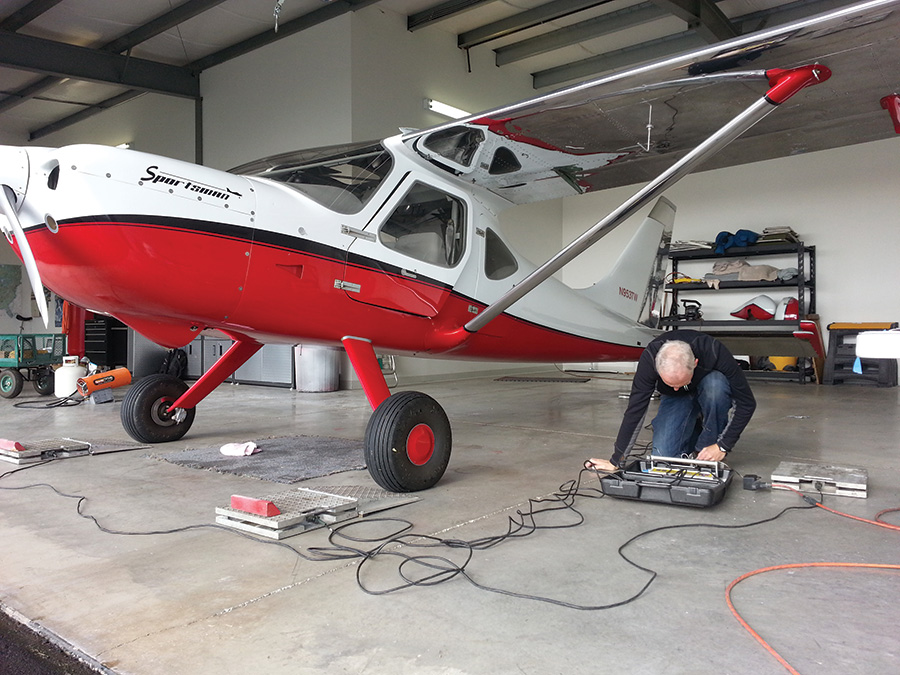 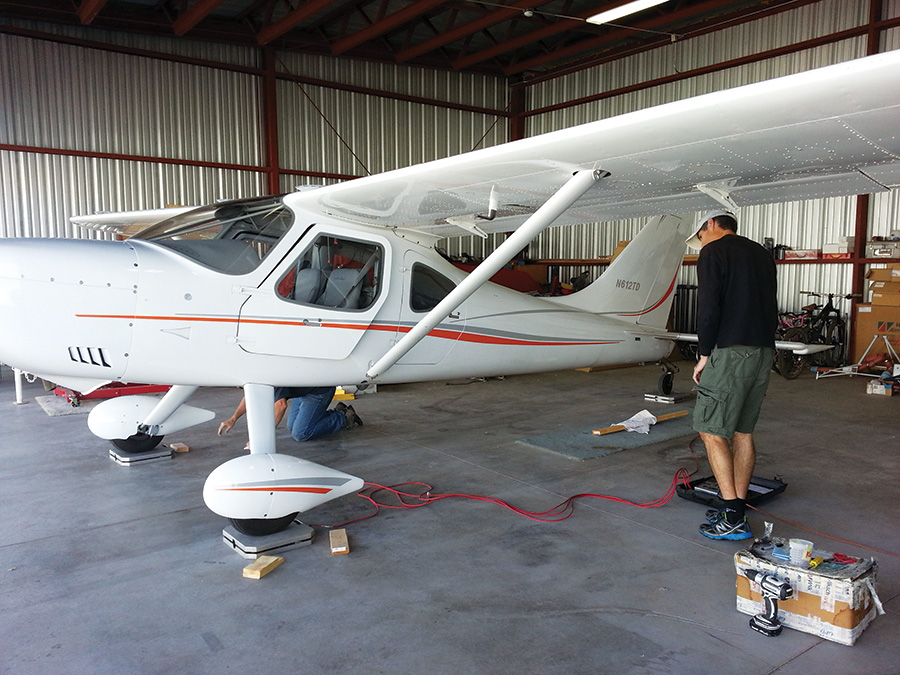 The diesel Sportsman is owned by Kurt Goodfellow of Boulder City, Nevada. He is an expert on diesel engines, and his Wilksch diesel-powered RV-9 was the subject of a KITPLANES flight review [“Point of Ignition,” April 2010]. Goodfellow worked closely with Glasair Aviation to develop the installation of the CD-155 engine. His Sportsman turns a 73.6-inch diameter, three-blade MT constant-speed propeller.

As expected with an engine that can maintain power at altitude, for any given power setting, the higher you fly, the faster you go. The diesel engine runs smoothly and quietly, and engine management could hardly be easier—the pilot simply selects the desired load (shown as a percentage readout on the engine instrument) via a single lever, and the FADEC takes care of everything else. 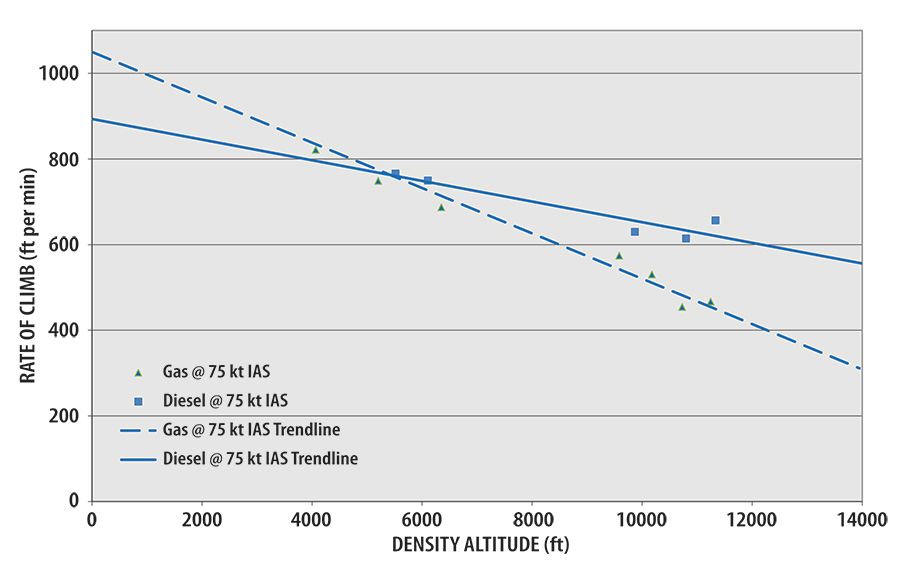 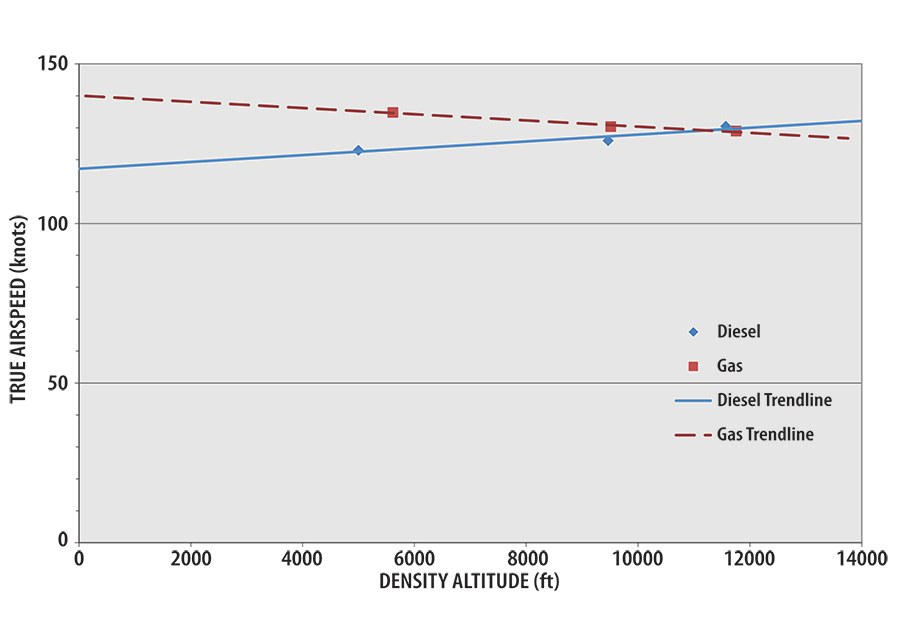 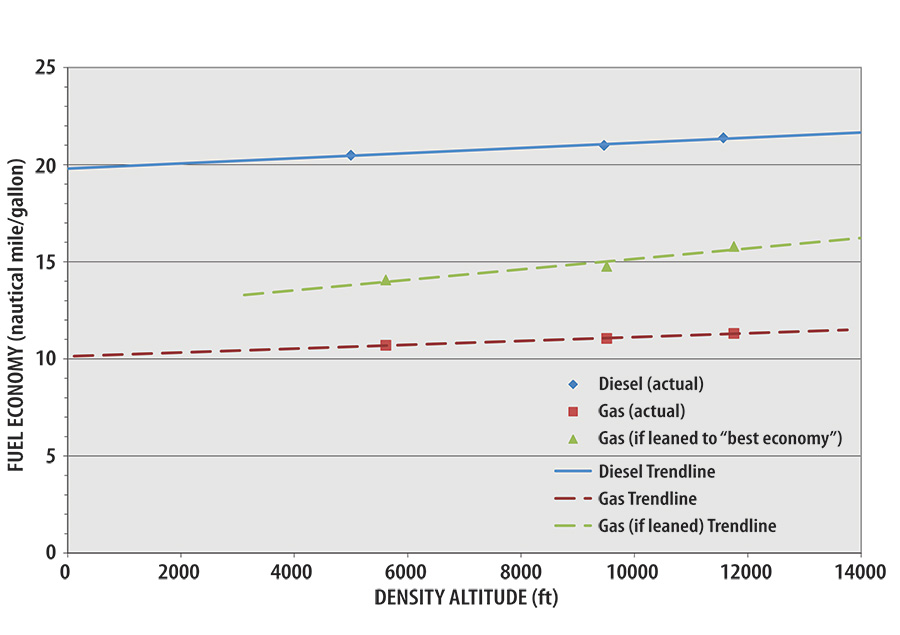 As is the case for a naturally aspirated engine that loses power with increasing altitude, if using wide-open throttle, the higher you fly, the slower you go, but with greater efficiency. Managing mixture for maximum efficiency requires a fair amount of pilot effort. For the test flight, the pilot’s attention was devoted primarily to accurately flying the test conditions and not toward leaning for maximum economy. It is for this reason that results for “actual” and “if leaned” fuel economy are listed. 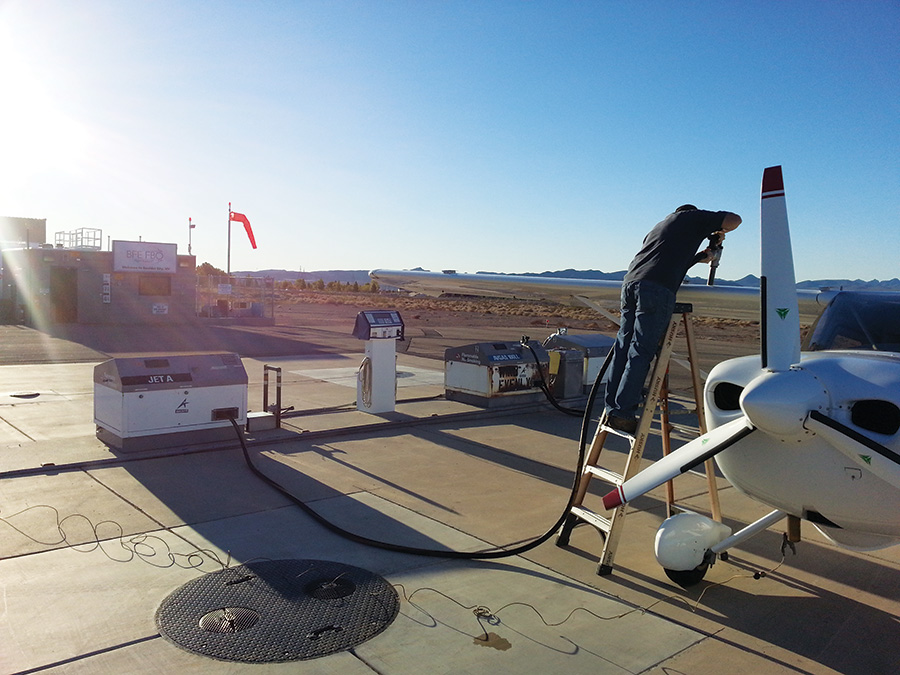 When it comes to fuel consumption, the diesel Sportsman (above) uses considerably less fuel than the gas Sportsman (below). 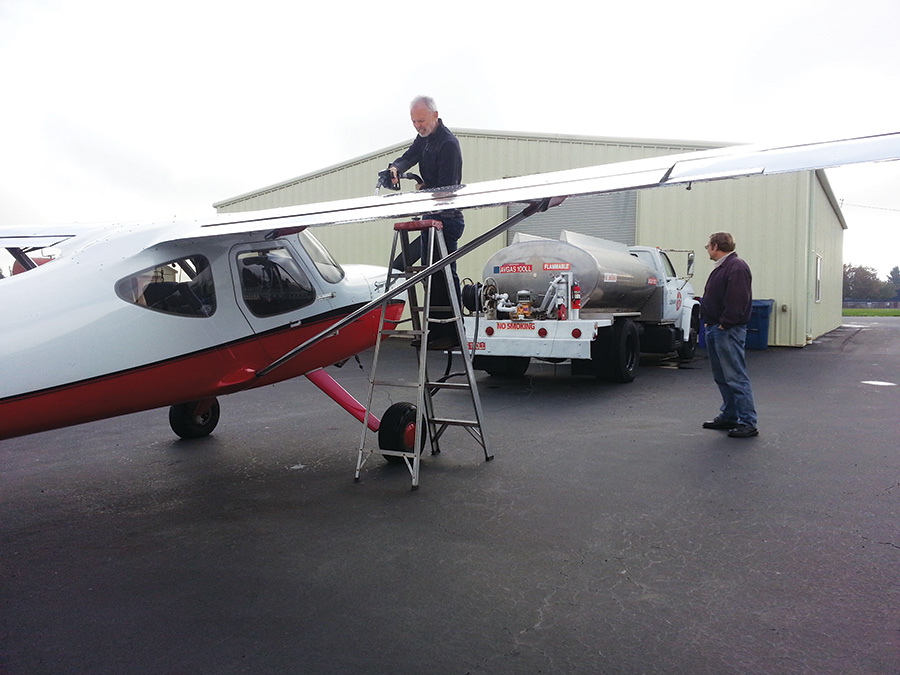 General Comments on the Sportsman

The Sportsman’s slotted fowler flap system is very effective. From the already low zero-flap stall speed, extending full flaps reduces the stall speed by about 7.5 knots. The stall behavior of the aircraft is good regardless of flap position.

The overall goal of this investigation was not so much to determine a best choice between the Lycoming gasoline engine and the Continental diesel, but rather to understand the advantages and disadvantages of each. What follows is a quick summary of what we learned:

• Fuel Economy: The CD-155 consumes anywhere from half to three-fourths (depending upon leaning technique and altitude) as much fuel as the Lycoming O-360 at the same power output.
• Installed Weight: The Lycoming parallel valve O-360 installation is approximately 110 pounds lighter than the CD-155. • Performance: At altitudes below 6000 feet, the Lycoming O-360 can produce more power than the CD-155 (albeit at a disproportionally higher fuel burn). When operating above 6000 feet, however, the CD-155 is not only able to produce more power than the O-360, but consume less fuel while doing it.
• Acquisition Cost: The O-360 is roughly $20,000 less expensive to purchase than the CD-155.
• Operational Simplicity: The CD-155’s single-lever power management has the clear advantage over the Lycoming’s manually controlled prop and mixture. With the CD-155, the pilot simply selects the desired load and the FADEC automatically meters fuel and controls prop rpm.

The current CD-155 time between replacement (TBR) is 1200 hours, so the savings over the lifetime of the engine amounts to $27,540 at U.S. fuel pricing or, if we are operating at German fuel prices, it amounts to $43,020. Does the CD-155 save enough fuel to offset the higher acquisition cost? The answer is that, like so many things in life, it depends.

In North America, where the availability of avgas is high and the cost is low, most operators will forego the advantages offered by the diesel engine in favor of the gasoline engine’s low acquisition cost. Despite its higher purchase cost and installed weight, the CD-155 can make sense in certain situations such as for high-altitude operations, for patrol missions requiring long distance and/or duration, or even for flight training.

In a place like Germany, the CD-155 definitely makes economic sense even though avgas (and high-octane mogas) are widely available. In some parts of the world, the unavailability of aviation gasoline has forced light-aircraft operators to make a difficult choice: Fly using jet fuel, or don’t fly at all. This is where Continental clearly has a captive market for their diesel engines.

The CD-155 engine definitely delivers the rated horsepower with phenomenal efficiency and operational simplicity. But compared to a parallel-valve O-360, it is both more expensive to purchase and heavier. So the question of which engine is “best” ultimately becomes a choice for the individual operator. The bottom line is that in the 150- to 200-horsepower aircraft engine market, diesel power is a viable option, and that is a positive thing for light aviation.

This investigation would not have been possible without Craig Ellison and Kurt Goodfellow being willing to share their time and their aircraft. Les Doud from Hartzell Propeller provided me with some data, and the folks at Glasair Aviation were also a big help with contacting Craig. I would like to thank everyone who made this possible. Conducting this experiment allowed me to work with some great people and gives me a renewed appreciation for our community of light-airplane enthusiasts.