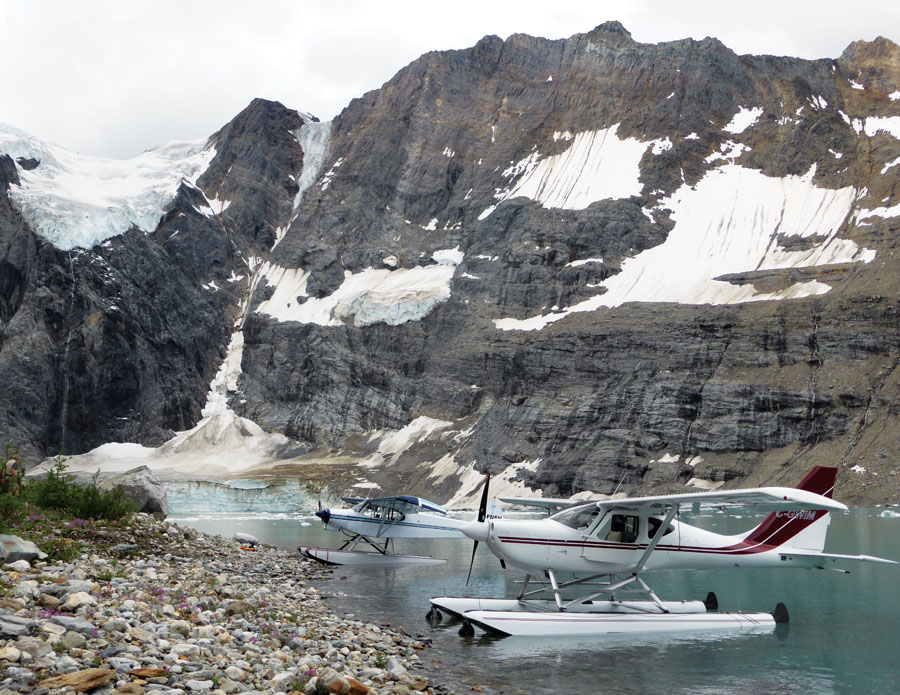 The goal of this project was to get into (and out of!) the many high alpine lakes around Vancouver, British Columbia. While a Super Cub does this very well, we wanted a plane with side-by-side seating, rather than pilot and “baggage.” We also put cruise airspeed ahead of range.

A Taylorcraft with an O-540 and extended wings and flaps is probably the best performing floatplane around here, but very much a one-off. Several Murphy Rebels with custom O-360 engines have exceptional performance, but need extensive modifications at build time to take the larger engine. The Murphy Elite is another possibility, but there are very few available.

Building a Sportsman through Glasair Aviation’s Two Weeks to Taxi program was very attractive, but the total project price was way over our budget. On the other hand, we didn’t want to build from scratch. When a local builder, with experience putting an O-540 into a Lancair, had an O-540 waiting for a GlaStar, we joined forces to create a GlaStar 540 amphibian.

We started working on the project in January 2012. The first step was locating a GlaStar to use as a starting point. The main project phases were engine swap, panel makeover, and amphibious float mounting. The key concern was, of course, total weight and center of gravity, along with handling on the water. But as it turned out, the hardest issue to solve was something entirely different (more about that a little later). 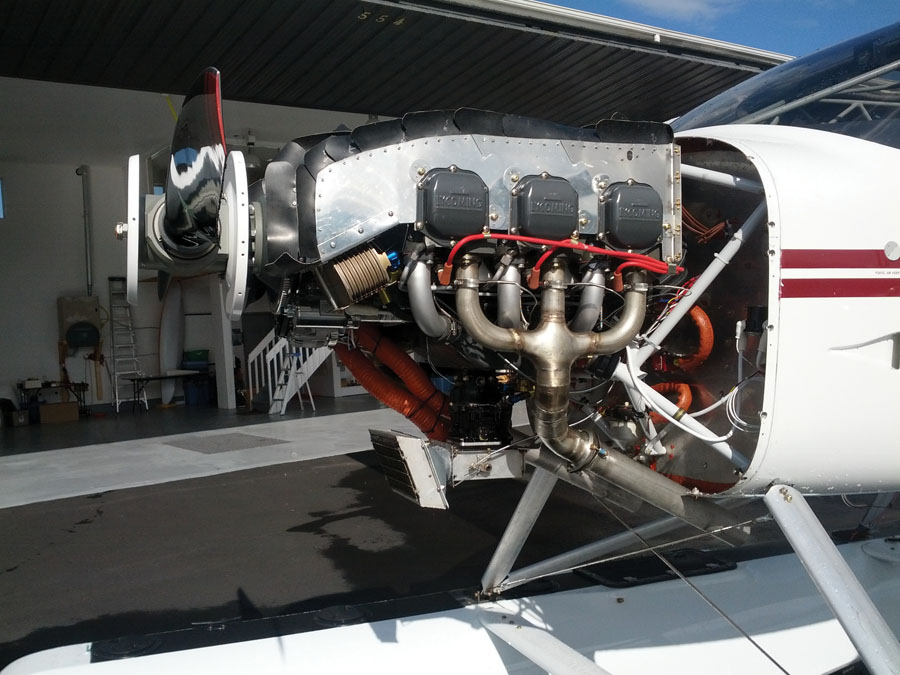 Replacing the original O-320 is a Lycoming O-540 turning an MT constant-speed prop.

The GlaStar had an O-320 that was removed, and extra tubing was added to the airframe to support the weight of the O-540. The 540 is rated at 250 hp at 2500 rpm, and with high-compression pistons is about 270 hp at 2700 rpm. A custom engine mount was fabricated to bring the engine as close as possible to the firewall, with dual electronic ignition (Plasma III) allowing removal of the magnetos at the back of the engine case. A dual 10-inch SkyView system made it possible to remove the vacuum pump. 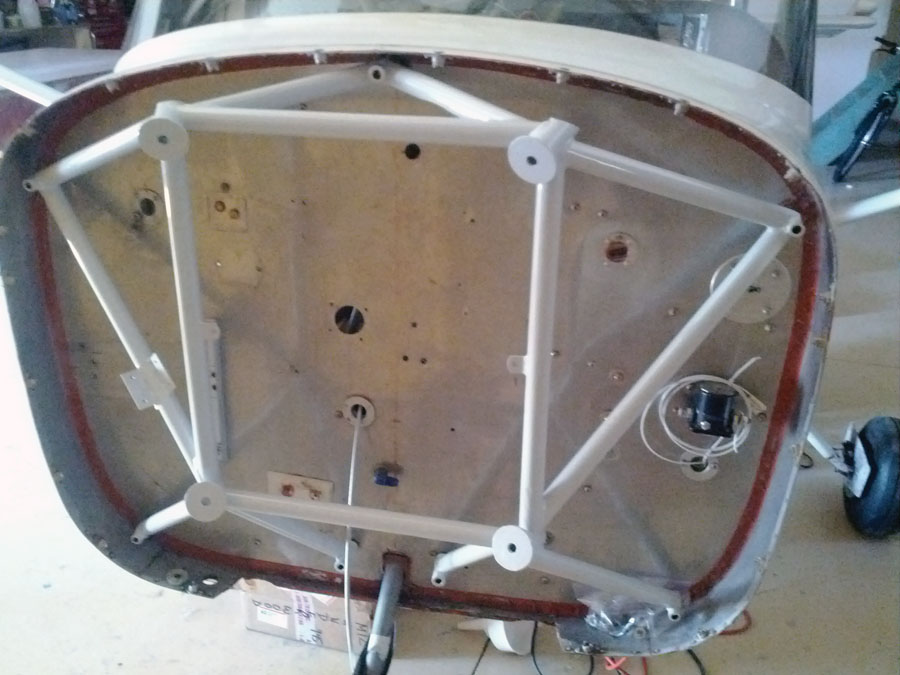 Extra tubing was added to the engine mount to support the weight of the O-540.

One goal was to reuse the existing cowling. Although we came close to making that happen, in the end a custom cowling was required. It was made with carbon fiber, which had the advantage of saving weight at the front end.

A constant-speed MT prop was chosen for performance and also to save weight. A Sky-Tec starter and lightweight alternator completed the engine accessories. The actual engine mount was done quickly, followed by engine installation, but cowling fabrication took much longer. 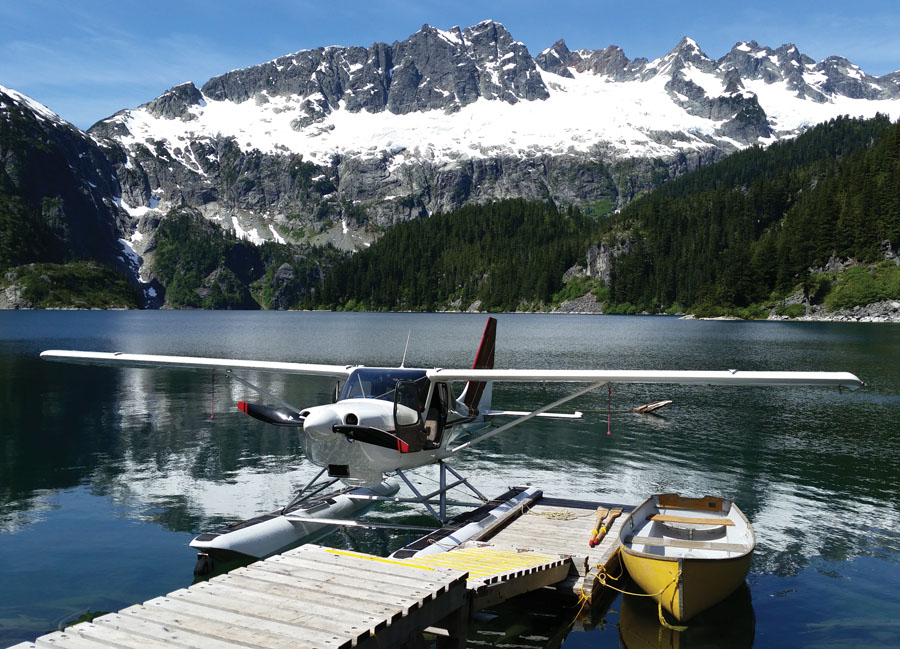 The panel has dual 10-inch Dynon SkyView displays, a Garmin audio panel, and a Garmin 480 color GPS/WAAS/NAV/COM. There’s also a Bendix COM/GPS and Mode C transponder, as well as USB power sockets and the amphibian gear control with a custom alerting system.

We went with Clamar 2200 amphibs rated at 2477 pounds. These are relatively light fiberglass floats with the hydraulic pump in one of the floats. Most importantly, the mount point has worked out well for water operations, with no tendency to submarine at taxi speed, yet they enable walking to the back of the float without getting wet. For comparison they are much better than a Cessna 185 on 3500 amphibs. Step taxi behaviour is very stable, with no tendency to nose over or pitch down on water touchdown. Getting the water rudder rigging right to give full turns in both directions took quite a bit of effort. 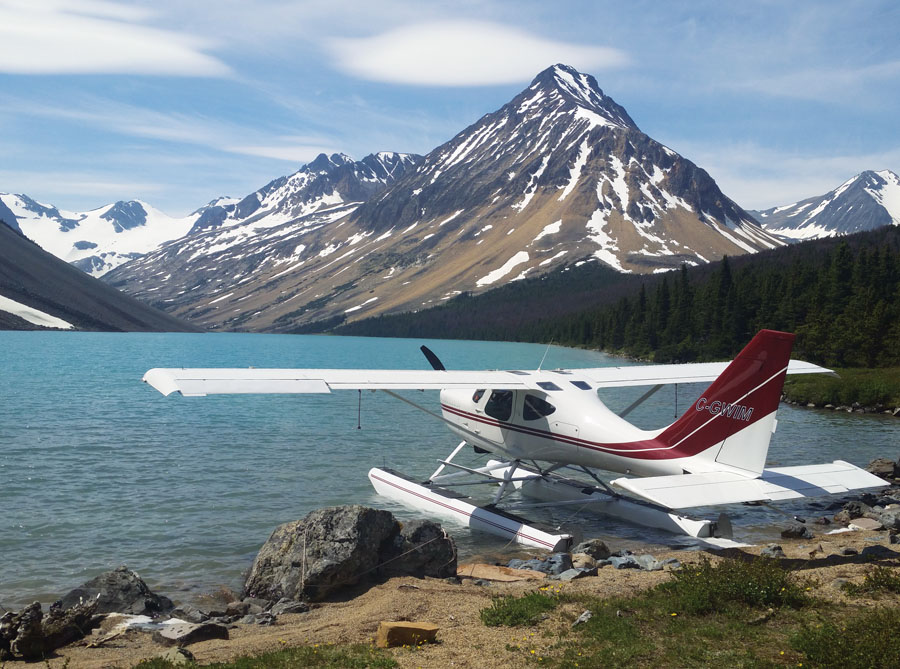 Although we went into the project with weight and center of gravity being the number one concern, especially on the water, the efforts to mitigate the weight of the 540 worked out well. Unexpectedly, the more difficult problem was engine cooling. Initially, with a custom cowling, the inlets and outlet were assumed to be the root problem. But after several cowling modifications, a larger airbox allowed more fuel flow and better cylinder-head temperatures. Conversion to fuel injection allows running lean of peak with good fuel economy and midrange cylinder-head temperatures.

There is no beating a Super Cub on straight floats for takeoff, and the pilot visibility is great. The Super Cub gets off in a shorter distance, but the GlaStar is not far behind. Where the GlaStar really shines is that it gets to the destination faster and goes farther with the convenience of amphibs for fuel stops.

The project took longer than we had hoped (don’t they always?), and we missed using it one summer. But by 2013 we were back in the air. The weather was great, and we had a wonderful summer going into some beautiful lakes. There were lots of problems to solve and lots to learn along the way. An aircraft is always a set of compromises and this one was no different, just with a specific goal. 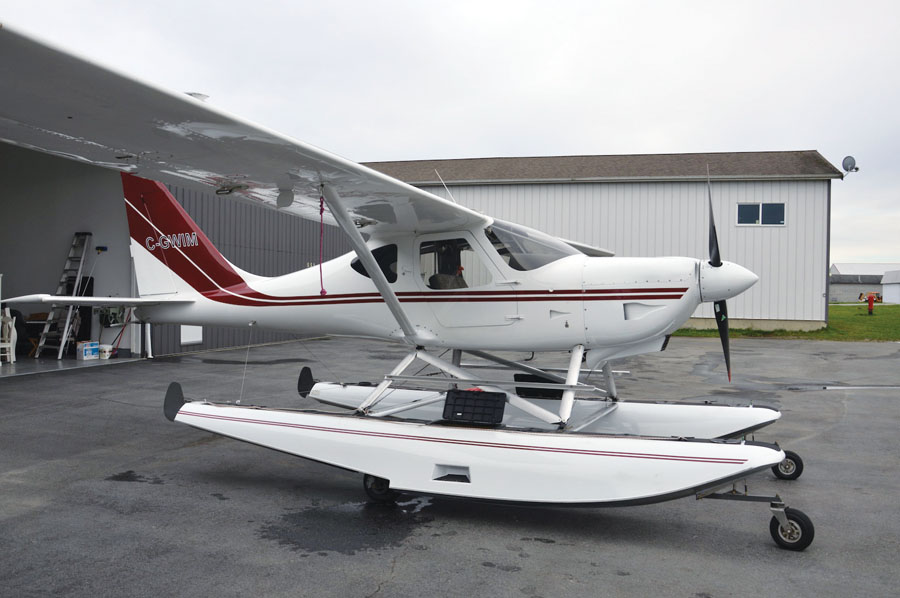 The GlaStar is mounted on Clamar 2200 amphibious floats rated at 2477 pounds.