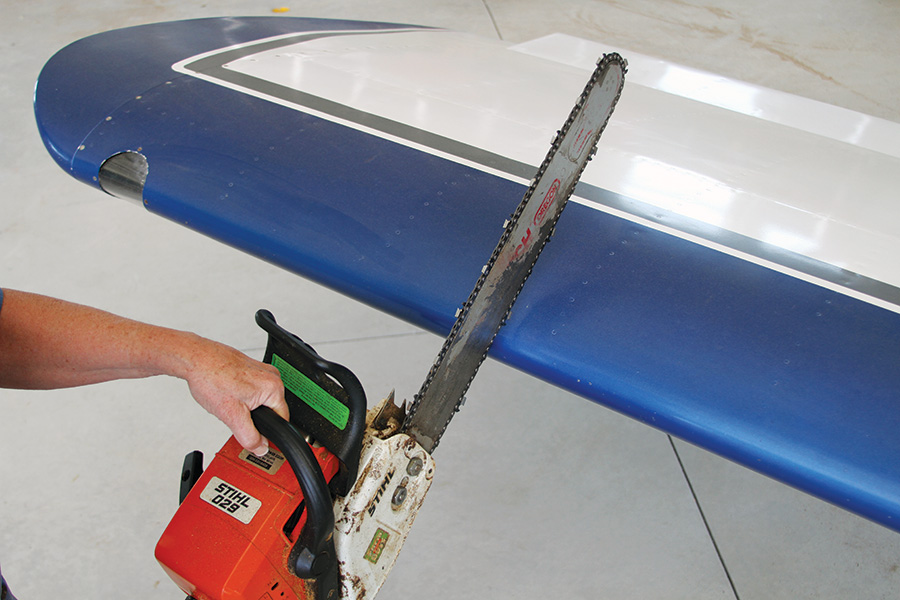 Wait! Put the chainsaw down-the liability to your survivors of selling a homebuilt is not as bad as you think.

In the most recent legal article, we discussed some of the things that a homebuilder should do when he sells the aircraft that he built. In this issue, we’ll expand on some of those same themes. What we are concerned about is trying to do what we can to protect the original builder of a homebuilt from legal liability claims after the aircraft is transferred to another person, whom we’ll call Buyer #1, and then when Buyer #1, in turn, sells or otherwise transfers the aircraft to subsequent buyers down the way.

Manufacturers of factory-built aircraft stand in a far different position than do homebuilders when it comes to what is known in the law as “product liability,” which means the potential liability that those manufacturers may face when users of their aircraft are harmed as a result of that use. The typical factory manufacturer places its products into what is called the “stream of commerce.” Doing so usually makes factories subject to being sued almost anywhere that their products are used, and it’s usually difficult for them to avoid being sued in just about any state in the country.

Conversely, the homebuilder stands in a much more favorable light. Almost never will a homebuilder be seen by the courts as intentionally placing goods into the stream of commerce because that plainly is not his intent when he builds an airplane for his own use, and isn’t in the business of building and selling aircraft to others. Since the homebuilder isn’t placing goods into the stream of commerce, he also isn’t subject to “strict liability” like a factory manufacturer is. Strict liability is a mixed bag of concepts, but it basically boils down to the notion that a manufacturer who is subject to that liability is liable for injuries caused by its defective products on a strict basis, irrespective of whether that manufacturer was negligent in any way. If the product is found to be defective in about any way, whether by reason of its design, manufacturing processes, or is just unreasonably dangerous, the manufacturer can be liable.

Negligence is an entire legal subject in and of itself. Basically it means, in our context here, that the builder didn’t build the airplane properly, and as a result, someone came to grief. We could spend pages discussing what a builder might do wrong that would constitute negligence, but most of us have a common sense appreciation of the idea. Don’t use hardware store materials instead of aircraft grade, for instance. If you follow the plans, or the kit builder’s manual in the case of a kit airplane, and do things right, you aren’t negligent. If in doubt about how to assemble a sub-assembly, fabricate a part, or anything else, get on the phone to the kit manufacturer, email the company, seek the advice of friends who have built the same type of airplane before you, and do everything else to resolve that doubt. Don’t just wing it.

Another basis for a homebuilder’s liability to others can be failure to warn. The warnings the law is considering in this area are warnings about anything dangerous, or about which a subsequent owner ought to be aware in the exercise of good judgment and common sense. There is an endless possible list of potential warning areas, and the first and foremost is that the airplane is amateur built, and therefore it does not comply with the myriad of FAA regulations that govern the certification of a factory-built airplane. Every Experimental/Amateur-Built aircraft must have a placard to that effect in plain view of the pilot and passengers. That placard alone is a very powerful defense tool when someone tries to go after the builder.

But there is more to the story. Certification regulations cover more than just the physical building of an airplane. There are various other requirements dealing with flight characteristics, stalling speed, crashworthiness, spin recovery, and many other aspects of the airplane that don’t have to be met by a homebuilt. These differences are the subject of what a builder should warn a subsequent owner about prior to selling the airplane.

What precise warnings should be given, and how they should be presented to a subsequent owner cannot be simply defined in a list of bullet points, because the things about which that subsequent owner should be warned vary with the particular airplane. A few that quickly come to mind are such flying qualities as the airplane’s having a higher-than-normal stall speed. I think we all know that a type-certificated single-engine airplane, with a few exceptions, must have a Vso (stall speed in the normal landing configuration) of no higher than 61 knots. This requirement has been around for a very long time, and its purpose is to allow a forced landing that is probably survivable, given decent terrain in which to land. Since your homebuilt isn’t governed by these regulations, it may have a Vso higher than 61 knots. If so, warn about it.

How are the spin recovery characteristics of your homebuilt? Will it recover, hands off of the controls, in one or two turns? If not, warn about that. What about a situation where your airplane develops a very high sink rate when flown power off? If your airplane drops like a rock and doesn’t glide fairly well, warn about that. If there is a real “gotcha” to do with flying your particular airplane, add it to your list to include in the warnings.

Now we come to a real conundrum. While it’s fairly easy to make a flight manual supplement that states the various warnings that you can think of, you’ll never think of everything. And by omitting some particular warning from that list, you may be tying your own noose because the warning that you didn’t give will be seized upon by expert witnesses working for the plaintiff who is suing you. A way to avoid that trap is to clearly state in that supplement that the warnings contained therein are not all exhaustive nor all inclusive, and by the very nature of flying an Experimental/Amateur-Built airplane, the user assumes the risks of flying an airplane that does not meet the FAA regulations and requirements for a normal category, type-certificated aircraft.

After all of this, where does it leave us in terms of protecting a homebuilder from subsequent owners? Frankly, in fairly good shape. Since you aren’t a manufacturer who places goods into the stream of commerce, you don’t have to worry about the bugaboo of strict liability that haunted the general aviation manufacturers of factory-built airplanes mercilessly through the 1970s and into the early 1990s, until Congress passed the General Aviation Revitalization Act of 1994, commonly known as GARA. It was only after GARA’s passage that Cessna resumed production of single engine airplanes in 1996, after a hiatus of ten years.

If you build your airplane properly, and especially if you build a kit aircraft, follow the kit manufacturer’s builder’s manual precisely, and don’t modify the airplane in any way that affects either its structural integrity or its handling qualities or other flight characteristics, you probably won’t be negligent in the construction phase.

Then, if there is anything about which you ought to give a warning or warnings, beyond what is included already by the kit manufacturer, you’re well on the way to being protected from losing a lot of sleep after you sell the airplane. The one last step in protecting yourself would be to insert a provision in your contract of sale to Buyer #1 that compels him to use your contract form and language when he sells the airplane, and insists that all subsequent buyers do likewise. If you do this, you’ve taken another major step toward protecting yourself from them, even if they don’t do as they’ve promised.

As we’ve said repeatedly, life can never be free of all risk; we can just do our best. But with all that we’ve discussed here, and the advice of a competent aviation lawyer in your own state, you have gone a long way to protecting yourself against liability claims from subsequent owners of the aircraft that you built.

Note: This article is not intended, nor should it be considered and relied upon, as legal advice applicable to any specific situation or contract. It is intended for general information only, and both the seller and buyer of any aircraft, factory built or homebuilt, should seek the services of a knowledgeable and competent aviation attorney before agreeing to or consummating any aircraft purchase or sale.