I swear I was not searching for a story. All I wanted was a Denver omelette at the Scotty Suz Home Cookin Café. Although that is the official name of the food trailer set up in the Sun ‘n Fun Campground, nobody calls it that. It is just the campground grill serving good food, whipped up by a friendly New Yorker. 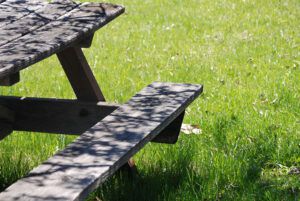 I rolled out of the tent this morning, groggy and unshaven, and came to the conclusion that a hot cup of coffee and a hot omelette would be just the impetus to get me energized for the day. I threw on a t-shirt and shorts and flip flopped down the path to the grill. The aforesaid friendly New Yorker (I really need to get his name) whipped up a steaming hot Denver omelette and I pumped a medium coffee from the thermos. I sat down at the picnic table, across from a gentleman who appeared about my age, but definitely better maintained. He spoke first. “Where you from?” “I’m from Atlanta, how about you?”

If I have learned one thing from my sweet and beautiful wife, it is that it is more blessed to listen than to talk. I am glad I did.

John came to SnF, as do many others, to immerse himself in the joy of flying. He has recently come off a long and distinguished career of flying helicopters, here and abroad. He has flown to countless oil rigs in the Gulf of Mexico, Saudi Arabia and the United Arab Emirates. He has saved countless lives at the cyclic of medical evacuation helicopters. Now retired, John and his wife live in Tennessee.

John came from flying stock. His dad flew B-29s in World War II, F-86s in Korea and Air Force transports later in his career. John’s dad wanted him to go to the Air Force academy, taking him to Colorado Springs as a teenager to motivate him. Alas, the rebellious teenager, influenced by the summer of love, left home, bound for San Francisco and Haight Ashbury. After bouncing around for a while, John impulsively visited an Army recruiter, who in no time had him on a bus to basic training. John’s dad was livid. He could hardly believe that his son gave up an officer track in the Air Force to become a grunt in the Army.

John became a helicopter mechanic and door gunner in a Huey, an assignment that earned him a Southeast Asian vacation. After numerous combat missions in Vietnam, John’s number came up and he was seriously wounded in a helicopter crash. He was evacuated to Japan and then later back to the States for a lengthy recuperation. His dad’s worst nightmare came true.

Eventually, John healed, learned to walk again, and, believe it or not, re-enlisted. After a few twists and turns, John ended up at Ft. Rucker, Alabama, where he started helicopter pilot training. At this point DNA took over. John was born to have a cyclic and collective in his hands. He found his life’s calling.

While still in training, John’s now retired dad and hi mom drove their camper trailer down to Alabama for a visit. John’s commanding officer said it would be ok for him to take his dad out to a Huey and show him the startup procedure. Dad, now acting as co-pilot, called out the checklist as John when through the switch ballet to fire up the mighty Lycoming T-53.

I had not asked that many questions before in this picnic table discussion, but I had to ask this one. “Is that the first time your dad gave you a thumbs up?” I could not tell if John was actually tearing up because my eyes were swimming. He nodded yes.

Going Glass in a Glasair

Gary Jones - April 21, 2013
0
Lessons learned while installing a Dynon SkyView system in a Glasair Super II apply to all types of experimentals. By Gary Jones.

Richard Keyt - November 15, 2013
3
The secret behind opening the Lycoming Crankcase. By Richard Keyt.