Stuck as we are between questionably useful 121.5 MHz emergency locator transmitters (ELT) that are nonetheless mandated and the expensive, still-evolving 406 MHz ELTs, personal locator beacons (PLB) and tracking devices are becoming more popular. There is, of course, SPOT, which we first reviewed in the February 2009 issue and visited again in the July issue of that year. And there is APRS (automated packet reporting system), which uses ham-band transmitters and is free beyond the modest cost of equipment.

Now we have New Zealand-born Spidertracks, which at first appears to be a sophisticated version of SPOT. Spidertracks uses a GPS receiver built into a 5.1×2.6×1.3-inch plastic brick for position information and an Iridium GPS transceiver to send data through the Spidertracks system; in general terms, this is somewhat like SPOT.

But SPOT’s tracking setup kicks out position reports only every 10 minutes and, in testing, has been found to be less than completely effective. There can be a 20-minute delay between receipt of the packet and processing of the data. Missed packets are not uncommon, and those packets only contain “I am here” data, nothing about altitude, speed or direction. Spidertracks, on the other hand, includes all that position/direction data and provides it at user-specified intervals of 1 or 2 minutes. In our testing over many flights up and down the California coast, Spidertracks did not miss a single packet. Not one. That is despite a growing disregard for the location of the box. For one flight, it sat on the baggage floor at the back of my GlaStar Sportsman, well away from the windows. A single LED on the unit glows red with initial power and amber when it has GPS lock.

Spidertracks safety modes work differently than SPOT’s. Normally, powering the unit provides only tracking; there are no armed alerts. Instead, by using the optional keypad, you can select the Monitor mode. When this is activated, the Spidertracks system follows the tracker. If it does not receive three hits in a row, it first notifies a person or group of people designated by the user; it does so through text or email messages. If no one responds to cancel the alert, a second tier of designees is alerted, and this can include emergency responders. The catch here is that the pilot must cancel the Monitor function at the end of the flight to prevent the alerts. Fortunately, the remote device, connected through a simple USB serial connection, is small enough to mount on the pilot’s line of sight. 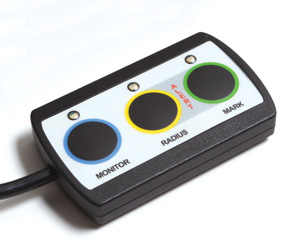 The Spidertracks remote keypad controls the tracking mode and allows for sending up to four canned messages.

As an option, you can configure the device as a Spiderwatch, where the Monitor function will be invoked automatically after passing 40 knots; however, you still must manually cancel the watch by pressing the Monitor button at the end of the flight.

Other features include the ability to send four different “canned” messages by pressing the Mark button one to four times within 2 seconds. A Radius button tells the tracking system that you will be working within a certain area and to not assume the airplane has crashed there. In our testing, these features worked without a hitch.

Indeed, the only hitch with Spidertracks is cost. The basic unit is $1995, plus $495 for the keypad. A monthly subscription for the Iridium network is $19.95, plus there is a 10-cent-per charge for the position reports and uplinked messages. Don’t go away angry. Spidertracks is hinting that a new unit will be unveiled at Oshkosh that will be substantially less expensive to buy and use, employ the same technology and have many of the same features. That’s all we could get out of the company. Based on the performance of the Spidertracks unit we tried, the firm’s booth will be the first we visit at AirVenture.