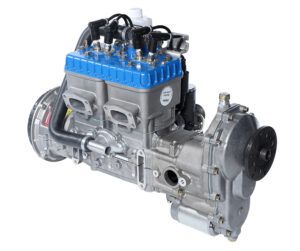 When the four-cylinder, four-stroke Rotax 912 hit the market in 1989, few industry watchers predicted it would signal the end of the two-stroke engine. After all, the light, cheap (relatively) twin-cylinder engines had solid footing in very light aircraft (ultralights and homebuilts alike), and the 912 was still a very new idea for Rotax. Plus expensive and relatively heavy.

But that day has come, with BRP-Rotax announcing that the 582 UL will go out of production at the end of this year. “This decision has been taken considering the nearly full transition of the light and ultralight aircraft market towards four-stroke aircraft engines,” according to the company.

In part, Rotax is concluding the 582 lineup because of “decreasing demand over the past years” for the engine itself as well as a parts shortage. The company says that finding new suppliers for some parts, which involved “requalification” would be economically unfeasible. This challenge comes atop global supply-chain issues that have crimped availability of everything from raw materials to microchips.

Just because the 582 is going out of production doesn’t mean its owners are stranded. Rotax is promising parts support for 10 years after the end of production.

The 582 was an outgrowth of the liquid-cooled 532, and produced 64 hp through one of several gearbox configurations. The application list for the 532 and 582 is fantastically long, as the economical engine underpinned many ultralights and growth versions in Experimental aviation.