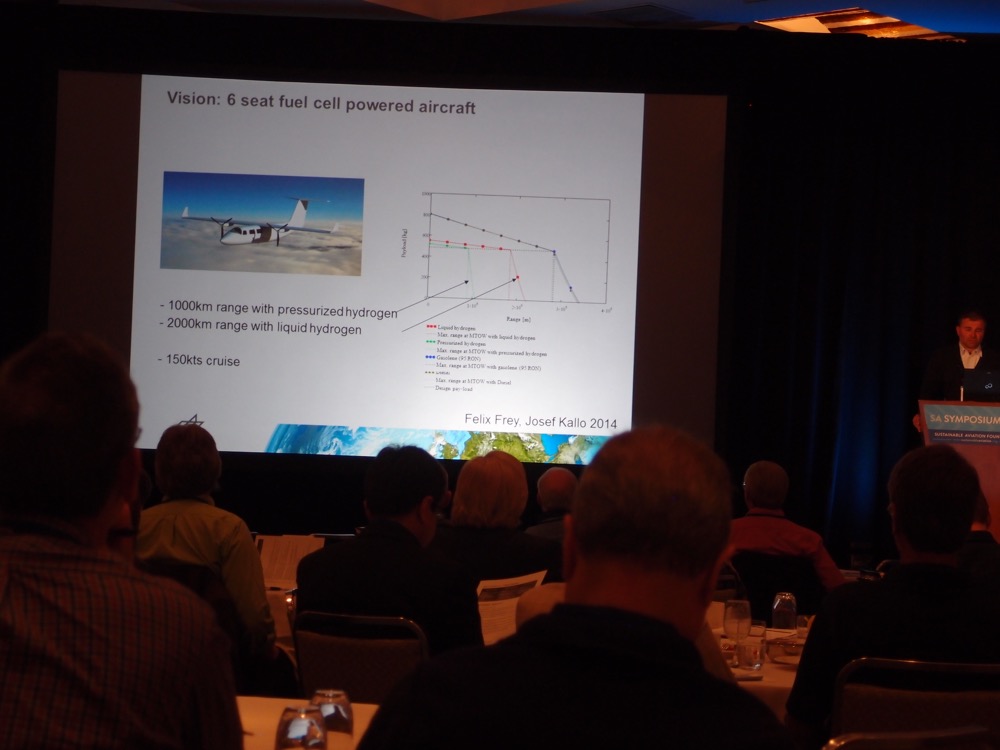 The First Sustainable Aviation Symposium was held May 6 and 7 at the Sofitel Hotel in San Carlos, California – just around the corner from the Hiller Aviation Museum. Over 120 attended, rubbing elbows with the speakers and learning about the latest in electric aviation and forward-thinking approaches to the challenges to come from increasing numbers of drone flights and possible “optionally-piloted” manned aircraft. We’ll first look at the aircraft now flying or soon to fly with electric, solar, and even hydrogen power.

Eric Raymond, who flew across America on solar power 26 years ago, continues pioneering, showing a high-altitude, long endurance (HALE) machine which apparently was an early design he proposed for Solar Impulse, but is now repurposed for optionally-piloted operation.

From his earliest projects up to his Sunseeker Duo, the two-seat machine he and his wife Irena fly around Italy and Switzerland (so far), Eric’s craft have been truly homebuilts. Coming projects are larger and even more ambitious. His six-seat Transporter would be a sun-powered Partenavia Observer lookalike intended for remote areas where normal aircraft support systems don’t exist. It would also be a nifty sight-seeing airplane for tours. With an optional gas-powered range extender on board (not unlike the BMW i3) longer trips would be possible. http://www.solar-flight.com/home/

Dr. Kallo is DLR Coordinator of Electrical Aviation for Germany’s equivalent of NASA, oversees work at the DLR Institute of Engineering Thermodynamics, which is converting the Green Flight Prize winning Pipistrel G4 to the hydrogen-powered HY4 (http://www.dlr.de/dlr/en/desktopdefault.aspx/tabid-10081/151_read-15429/year-all/#/gallery/22059). Tests of this hydrogen-fueled machine may begin later this year, farther along than one would think, according to Kallo. With Germany installing a hydrogen infrastructure nation-wide for the 50 Hyundai ix35 fuel cell cars it hopes to put on the roads around Munich this year and more broadly around the entire country (http://www.greencarreports.com/news/1103841_worlds-first-fuel-cell-car-sharing-program-to-launch-in-germany), aircraft like the HY4 would provide autonomous flight between regional airports, much like Dr. Brien Seeley’s idea for pocket airparks. They will also share the hydrogen generating and fueling system with the cars.

Interestingly, the DLR has a six-seater transport in the wings, so to speak, similar to Eric Raymond’s Transporter, it would rely on hydrogen rather than solar panels for its motivation. Even larger craft loom in the future, with 40-seat regional transports possible in the not-too-distant future. 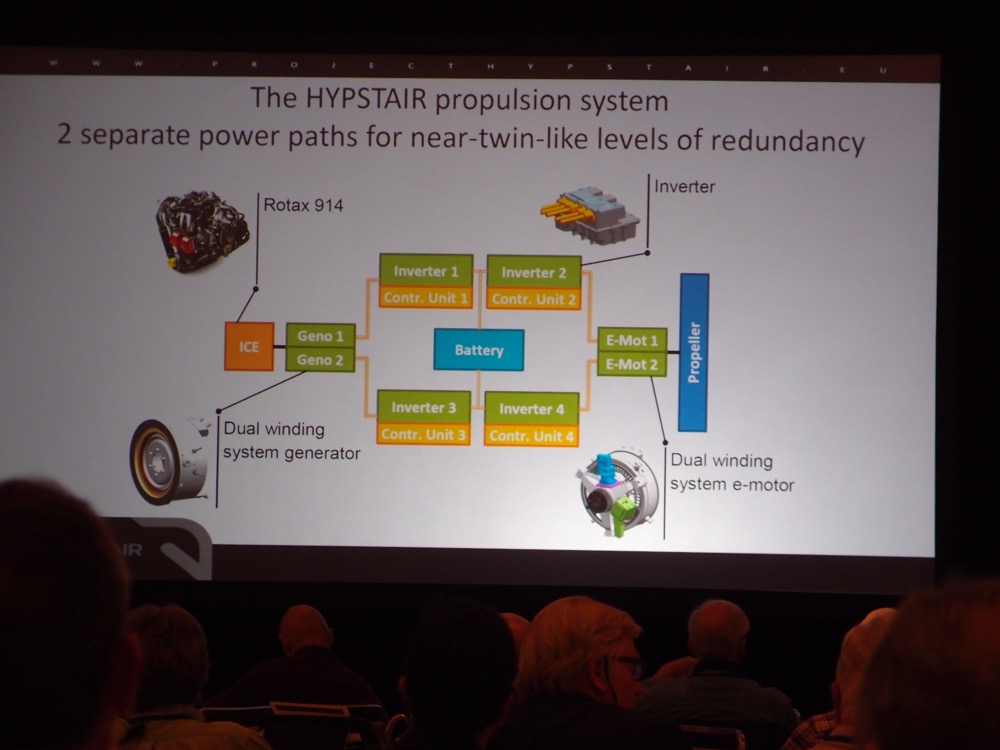 Dr. Anton, head of eAircraft at Siemens AG, showed five different projects for which his firm is supplying a range of electric motors. Already flying, the WATTS-UP (now the Alpha Electro) with Pipistrel shows that a practical training aircraft is possible, but Siemens is using other small light aircraft to gain experience. Currently, Siemens motors are in the Czechoslovakian eFusion Magnus LSA and the German Extra 330EL, two ends of the performance spectrum. The Magnus 85 kilowatt (114 horsepower) motor allows aerobatics with the 600 kilogram (1,320 pound) sportster, enough to train airline pilots in recovery from unusual attitudes. Extra’s 330EL with the 260 kW (348 hp.) Siemens motor and 14 battery modules should have enough oomph to stage a spectacular 15 to 20-minute all-out aerobatics display. The great torque produced by an electric motor enables better performance, with 1,000 Newton-meters (737 foot-pounds) available from the SP260D motor, vertical maneuvers should be impressive.

Working with Pipistrel, Siemens helps power the Hypstair, a hybrid machine using a Rotax 914 and a dual-winding Siemens generator and dual-winding motor. This provides a high level of redundancy and near twin-engine reliability from a single propeller aircraft. http://www.hypstair.eu/

Finally, the HEMEP – Hybrid Electric Multi-Engined Plane – is a Diamond DA-40 series aircraft with its engine hidden in its nose. The engine drives a generator that charges the batteries and powers the stalk-mounted motors. This serial hybrid provides redundancy, in that an engine failure would leave the batteries to power the motors for a limited time. 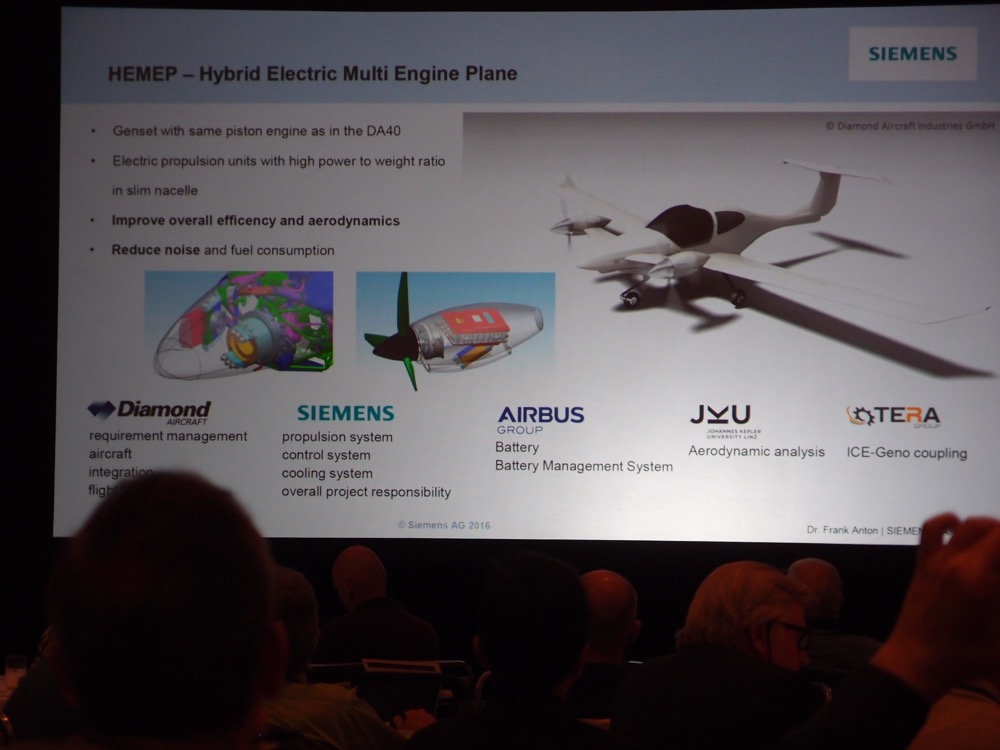 As with most electric aircraft designers, Starr is hoping for better batteries in the near future, the current state of the art not quite ready for an advanced design like Bladessa.

Chip Erwin and the Personal SportAircraft

Chip has two aircraft presently on the market, both single-seaters. His Personal Sport Aircraft philosophy allows Chip to undercut the market for Light Sport Aircraft, which usually run in the $150,000 price range. His very personal aircraft start at under $12,000 for a kit for the open-air Zigolo, complete with a two-stroke petrol engine. He envisions a price around $20,000 for the ready-to-fly airplane with his proprietary three-phase, axial-flux, permanent magnet electric motor system.

This 25-pound unit would also power the enclosed Merlin, a high-cantilever-wing machine looking a bit like a shrunken Cessna 152. Because Skip hopes to pull as much as 75 horsepower from the motor, it could provide enough pull to have Merlin on amphibious floats with retractable landing gear, neatly controlled with a Bluetooth app. He looks forward to being able to sell the complete electric package with floats for under $60,000.

Tomas Brødreskift and the P2 Excursion

Tomas, an industrial designer in Norway, has nearly finished his ten-year project, a hybrid amphibian that applies a four-part mantra: Automation, Efficiency, Usability, Sustainability. Automation applies computers to simplify user interaction, and the careful design enables efficiency and lower power requirements. Usability comes in the large cabin, able to haul long and large objects such as bicycles and skis and even allow overnight camping – a true bush plane. Sustainability comes from the hybrid power system, designed to use low-cost biofuels and “have no impact on the environment in a bad way.”

Aerodynamically, the airplane competes with non-amphibians, not paying a penalty for its extra capabilities. Its efficiency enables low-cost operation through its EHPS (Equator Hybrid Power System). The Engiro 60 kW (80 hp.) Diesel engine spins a generator that sends current through a dual-redundant set of controllers to the Engiro 100 kW (134 hp.) motor on the tail. Boost batteries provide extra power for takeoffs.

Tomas Brodreskift has shown enormous creativity, perseverance and generosity in developing and building this craft – very much a homebuilt enterprise. Several students have learned from participating in the design and construction of the airplane, many achieving advanced degrees for their efforts. Tomas and his partner Oeyvind Berven started the project as a design school project and continue to use it as a learning device.

Next, we’ll look at the power systems shown at the SAS, and end with an overview of the infrastructure and systems required to maintain safe passage through the electric skies of tomorrow.