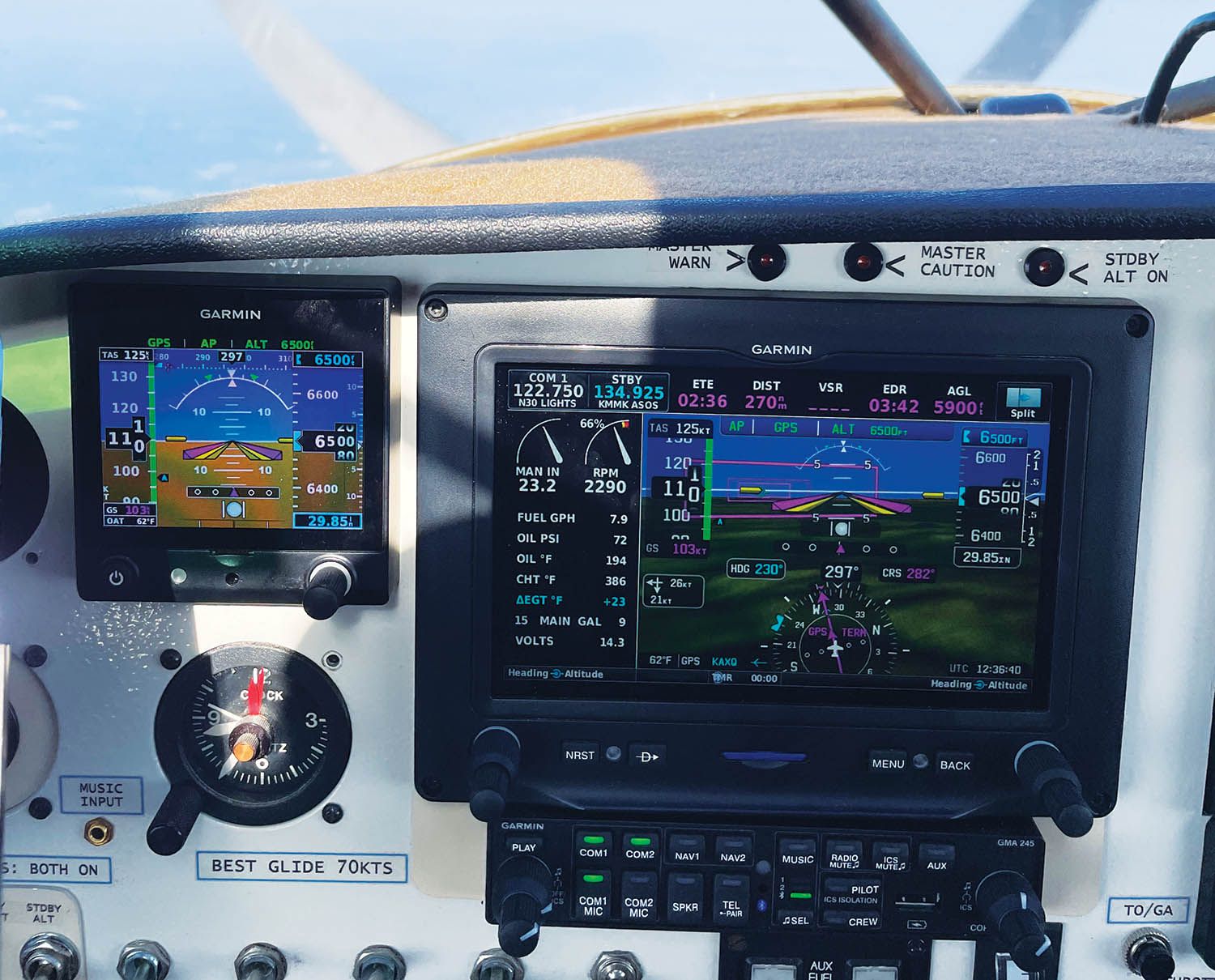 I’ve just returned from an awesome week at EAA AirVenture Oshkosh. Not only was the event spectacular, but it marks the first really long cross-country flight in my plane since I turned the basic VFR flyer into a fully capable IFR all-glass bird. The saga of that conversion was detailed in the January and February 2022 issues of KITPLANES® under the title, “Diary of a Panel Upgrade.” The short summary is that I removed the vacuum pump and replaced it with a backup alternator for redundant power. Then I pulled out all the old instruments and radios and replaced them with a full Garmin panel consisting of a 7-inch G3X Touch EFIS, backup G5 EFIS, GTN 750 GPS/nav/com, GTX 33 ES transponder for ADS-B Out, remote GTR 200 com radio and two-axis autopilot. Budget was an issue and many of the units were used. I spent a lot of time scouring eBay, VansAirForce.net and the Glasair Owners forum classifieds.

The 16-flying-hour round trip gave me plenty of time to reflect on what I liked about the panel and what I would do differently were I to do it again.

Let’s start with the good. I’m an electric fanboy. I drive electric cars and I feel much more comfortable flying with dual alternators than I ever did with a vacuum pump. After having one fail in IMC, I couldn’t wait to be rid of it. It took a while to retrain my brain, but I love the presentation on the EFIS. I think it’s much easier to scan and understand, and that big horizon with synthetic vision almost feels like cheating. I still get a thrill seeing the “runway”—complete with numbers and centerline—roll under the plane on the screen.

I’ve flown with some sort of handheld GPS for 20 years or so. My current product of choice is an Apple iPad mini running ForeFlight. I love that the G3X has a built-in Bluetooth connection that lets me create or update flight plans on the iPad and push them to the GTN 750. Or if I change the flight plan on the 750, it updates ForeFlight. My previous plane had a Garmin GNS 430 and while it was a great unit, I don’t miss all the knob turning and button pushing.

I also like that both the G3X and the GTN use standard SD cards for data updates. Good riddance to proprietary and expensive data cards.

I display ADS-B In data on the iPad as well. The traffic on the Fisk arrival to Oshkosh was impressive, but it was a great comfort knowing where most of it was, even though I usually couldn’t spot it with the Mark I eyeball.

I can’t say enough nice things about a solid two-axis autopilot. I’ve flown plenty of long trips without one and the fatigue on arrival is real. And I’m marveling over having one as well coupled as this. I love plugging an IFR approach into the GPS and watching the plane fly itself down to minimums. I think it would fly itself onto (or into) the runway if I let it. It also makes IFR holds a piece of cake, allowing me to focus on other tasks related to the flight.

I also like the aesthetics. It took a while to figure out, but I like the way all my panel labeling came out. A small thing but I do stare at it a lot!

Not much, to be honest. Most of what I don’t like is because of monetary decisions. For example, I don’t like that I only get TIS-A traffic on the GTN 750. But that’s because I didn’t want to spend the money on something like a Garmin GTX 345 transponder ($5800). I was quite excited about scoring a GTX 33ES on eBay, but it’s ADS-B OUT only.

I wish the G3X had a little more knob flexibility. The left-hand knob is always heading and altitude set. By default, the right-hand knob is barometer setting and flight director bug. They change a bit if you’re using split screen, but I rarely do that on this small screen. I prefer altitude and heading on the right, which leaves me with both knobs doing the same thing. I use the knob on the G5 to change the baro setting, so mostly I’m happy. But I really wish that left knob could be used to change the volume on the GTR 200 remote com. Instead, I must touch the radio icon and tap the plus and minus volume icons.

I’m not happy with my antenna locations. Or perhaps my poor installation. The transponder and second com antennas are on the belly and may be too close to each other. I have a spot inside the fuselage (radio transparent fiberglass!) under the baggage floor where I had my original UAT ADS-B Out installed. I moved the transponder antenna there, but it kept setting off the ELT. Perhaps replacing the wire from the ELT to the switch on the panel with a shielded one will fix that, but I haven’t tried it yet. Com 2 has terrible reception to the sides but OK fore and aft. I don’t know if it’s because the antenna is between the gear legs or if I have a lousy ground plane. More to-do’s.

I was quite proud of the bracket I built that let me mount the transponder, remote com and GAD 29 ARINC adapter out of the way against the firewall. Until I had to remove the transponder. I imagined access was going to be quite a bit easier than it is. OK, a lot easier.

The final little annoyance is panel lighting. This is something I just need to buckle down and fix. The plane came with a dimmer for the instrument lights and a couple post lights. I have a red LED strip waiting to be mounted for overall panel illumination. But I naively wired the G3X and GTN 750 into the same dimmer. They use the same logic as the post lights: more voltage = brighter screen. But in reality, when I turn the panel lights up I really want to dim the big screens. So right now, I don’t like flying at night because I must manually adjust the brightness of all the screens.

What Would I Do Differently?

I spent a lot of effort making everything fit seamlessly in the existing panel and that drove a couple other major decisions. I let little things feel like big things. Things such as how will I ever get the nut plates in the right place for the existing holes in the glareshield?

I also was nervous about removing and then replacing all the circuit breakers. The old switches were so nicely installed, it seemed like a ton of work to move them. In the end I think I ended up doing a lot more work than if I’d just started fresh.

I wanted the 10-inch G3X Touch, but it wouldn’t fit because of the row of toggle switches and my transfer pump panel at the bottom of the panel. The 7-inch G3X fit nicely in the space of the top four instrument holes so I bought that instead.

I wanted my audio panel to be in the traditional spot on top of the radio stack, but I would have had to relocate the throttle/prop/mixture cables to a subpanel below, and I would have had to figure out how to attach rail extensions behind the panel. I put the audio panel right below the G3X. It’s very handy there but I had to make some thin metal covers because it doesn’t quite take up the space of the previous instrument holes.

I spent a lot of time making and remaking a little subpanel with the fuse box in it to cover up the big square hole left by the Vision Microsystems VM1000 engine monitor. Because I replaced the split master rocker switch with two toggle switches—a progressive off/battery/alternator and a standby alternator—I have another little subpanel covering up the ugly square hole from the rocker.

Although I spent a lot of time reaching over and under that panel trying to tame the rat’s nest of wires, it’s really not up to my standards. I had built as much of the wiring harness as I could at the bench, but a lot of it still had to be put in place and threaded through rings and zip ties. I try not to show the pros the back of the panel.

Don’t get me wrong, I’m quite proud of how it all came out (at least from the front), but I’m still lusting after that 10-inch screen. The 7-inch one makes a great PFD, and I use a combination of my iPad and the GTN 750 for moving maps, but the convenience of the map and/or charts right on the screen in front of me, plus having full engine instruments visible all the time, is very appealing. I saw some gorgeous laser-cut and laser-etched and overlay printed panels at AirVenture. I do have the CAD outline of the panel, so I could have designed it and sent it off to be cut.

And I ended up removing and rearranging all those circuit breakers anyway.

So, if I were to do it all again, I’d build an entirely new panel with a 10-inch screen. I’d also relocate all the switches and mount the throttle/prop/mixture controls on a subpanel to give me more avionics space.

In the GlaStar, the bottom of the panel is attached to tabs on a round tube. I would, instead, use slightly loose Adel clamps so that I could rotate the whole panel flat to work behind it. That would require routing all the wires along the bottom of the panel, but that’s OK because I would wire it all up on the bench anyway.

I would use the opportunity with the panel out to really clean up the wiring behind it. I would build in better panel lighting too. And I would build an easily accessible avionics shelf to mount the com and transponder on. I’d also see if I could afford a full ADS-B In/Out transponder.

This was a really fun, educational and useful project. I now understand why people who build one plane often go on to build another. As for me, I’m ready to build my next panel! 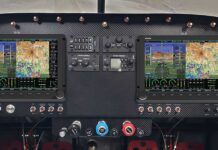