Before we even begin our discussion of resistor values, let’s get a firm grip on what resistors do and why we use them. In short, resistors are used to set currents in a circuit. Remember Brother Ohm? His formula said that I=E/R. That is, if we want a particular current to flow in a circuit, we take the applied voltage, divide it by a resistor value, and that sets the current “I.”

In a practical and very simple circuit, we have an LED bulb that wants to run from a 12-volt battery source. The manufacturer tells us that we should run 25 milliamperes (mA) to achieve maximum LED life and 42 mA for maximum brightness with a shorter LED life. The math says then that we should use (R=E/I) a resistor of (12/.025) 480 ohms for life and 286 ohms for maximum brightness. 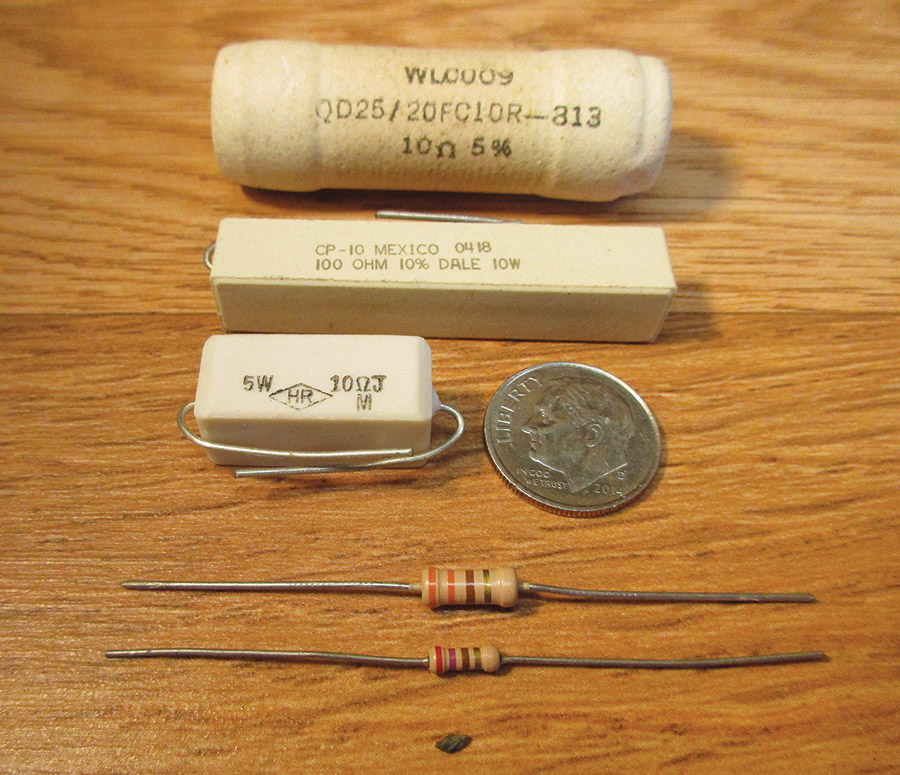 And that sets the stage for our discussion this month, as you can’t buy 480 ohm (Ω) or 286Ω resistors. What to do?

We’ve all been there: $5,000 toilet seats for an Air Force tanker. $57 apiece for rod bolts for Continental engines (when you can find them). $75 for Cessna (“NAPA” National Aircraft Parts Association $15) fan belts. And $20 for a hand-selected specially packaged 480Ω 2-cent resistor for your LED.

What value should be used for the current limiting restrictor in this simple circuit? (You’ll find the answer near the end of the story.)

It all happens when a manufacturer has “approved” replacement parts for their product. Fast rewind to Henry Ford, who said he would give his automobiles away if he could control the spare parts market.

Just prior to and during WW-II, manufacturers were “giving away” radios and electronic devices to the military for cost, and in their “approved” maintenance manual were oddball values of parts that could only be had from the manufacturer. Guess what? The replacement fix-it parts’ costs were ten times the value of the radios.

The RMA stamp on a particular radio was then used by the military in their procurement documents, and Uncle Sam saved untold billions in replacement parts costs. 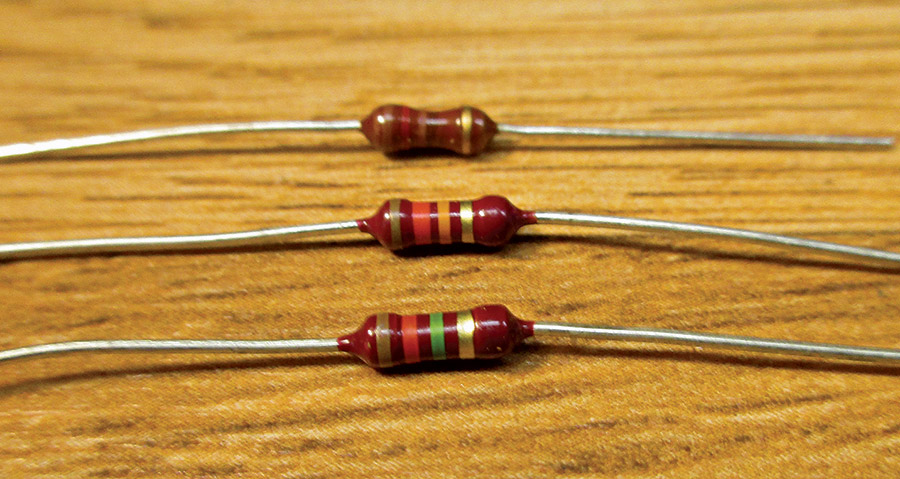 Enter the explosion of the radio and television market just after WW-II, and the civilian market started to make the same demands. “Make your radios and televisions with standard parts so that we don’t have to buy your specialized parts,” and thus was born the RETMA (Radio Electronic Television Manufacturers’ Association) that adopted the RMA process for standardizing parts.

This was in the day (the 1940s) when the “standard” tolerance for a resistor was 20%. As resistor manufacturing technology improved in the 1960s, 10% became the standard, and then about 35 years ago, we went to 5%. Let’s go with that for a while, and we will eventually bring it to modern day 1% SMD chip technology.

But how did we come to these standard values of which I speak? Way back in 1870, a French military engineer named Charles Renard proposed a standardized set of values for “sets” of components. Here’s the deal (once again using resistors as an example). As we said above, the 10kΩ 5% resistor could be between 95k and 105kΩ and be within the stated tolerance. What use would it be, Renard said, to have a value in this series of 97k? or 103k? Or for that matter 92k or 108kΩ if the next resistor down or up covered this with their tolerance?

What Renard said was that we needed to make the individual values just barely overlap in their tolerances, and he proposed that if the tolerance is (for example) 5%, we make the steps 1.1007 (and a whole bunch of decimals). Thus, for the 5% values, we make the multiplier 1.1007 times the lower value to get to the upper value, and then round to the nearest whole number.

Here are the standard values from 10 to 100. Simply multiply them by whatever decade you need to use. For example, we came up with 480 ohms in the LED example above. We can see easily that 470 ohms ought to be the value we go down to the store to get. Same for maximum brightness. 300Ω is the closest standard value if brightness is your choice.

Now I said that with today’s improved manufacturing processes, 1% was becoming the standard, which means that instead of only 24 values for the 5% resistors, we will have 120 values per decade. Try and keep your stock shelf manageable when there are eight common resistor decades, or 960 resistors to stock if you are going to start using a standard 1% surface-mount technology resistor.

When a resistor does its job of setting current, an unfortunate byproduct of this operation is the dissipation in the resistor of heat. That’s the downside of using resistors, but a necessary one. In particular, when we used the 470-ohm resistor to deliver 25 mA to our LED, we produced (I2 * R) about 0.3 watts (290 milliwatts) of power. This forces us to use the next larger wattage resistor in our parts bucket. Standard little carbon film resistors come in 1/4-watt and 1/2-watt as normal off-the-shelf parts. We can’t use the 1/4 watt as 0.3 watts exceeds the component’s rating, so we have to use a 1/2-watt resistor in this circuit. We can buy resistors with kilowatt and microwatt ratings if we wish.

Standard values from 10 to 100 for a 10kΩ resistor with a 5% tolerance. It takes 24 separate values to keep things within 5% of each other.

One last concept and I’ll dismiss class today. At one time we tried printing the resistor ohms value directly onto the part and it was just too small to read, and it had a tendency to wear off as the resistor got warm in use. At that point, the resistor color code was brought into play. Most all common quarter- and half-watt resistors today use a common color band code that I use whenever I want to designate a number in color (say, for wires or pins or other numbered things).

It would be a good thing if you memorized this color code.

There are a few mnemonics for this color sequence, not all of them printable in a “family” magazine:

“Better Be Ready Or Your Great Big Venture Goes West”

Another of them that I will only allude to mentions Violet as a lady of questionable virtue, and I’ll leave it at that.

Ah, the pop-quiz question about the current-limiting resistor in the schematic. Here is how I rock and roll with that one. First, a “12-volt” battery in an airplane with the alternator running is about 13.6 volts. Given that a red LED drops about 1.5 volts in operation, the voltage across the resistor is around 12.1 volts. For maximum life (25 mA) the theoretical resistor value is 484 ohms. The closest RETMA value is 470 ohms. For maximum brightness (42 mA) the calculation shows 288 ohms. The closest RETMA value is 300 ohms.

Enough of the theory already. I think I’ll take up the task next month of designing you a switching power supply that is 85% efficient and can be varied from zero to within a quarter-volt of the aircraft battery supply. Say, for example, an LED landing light regulated supply, or an efficient instrument lamp dimmer, or a power supply to charge your cell phone…it could be fun. Until then…Stay tuned…