This month we’ll discuss instrument panel switches for use in Experimental aircraft. To get things started, let’s take a look at switch nomenclature—the way a switch is described.

A switch is described by specifying the number of “poles” and “throws.” Each pole can be thought of as an electrically independent switch or switching circuit. A single pole is one electrically isolated circuit within the mechanical switch housing. A double-pole switch is two electrically isolated circuits within a single switch housing, controlled by a single lever by the user. The throw refers to how many electrical connections can be made. The number of throws is the number of separate wiring path choices other than “open” that the switch can adopt for each pole. A single-throw switch has one pair of contacts that can either be closed or open. A double-throw switch has a contact that can be connected to either of two other contacts. The chart below shows the most common switch types. Parentheses around a switch position indicates it is a momentary, spring-loaded position. “Off” indicates a switch position where the contacts are not connected. 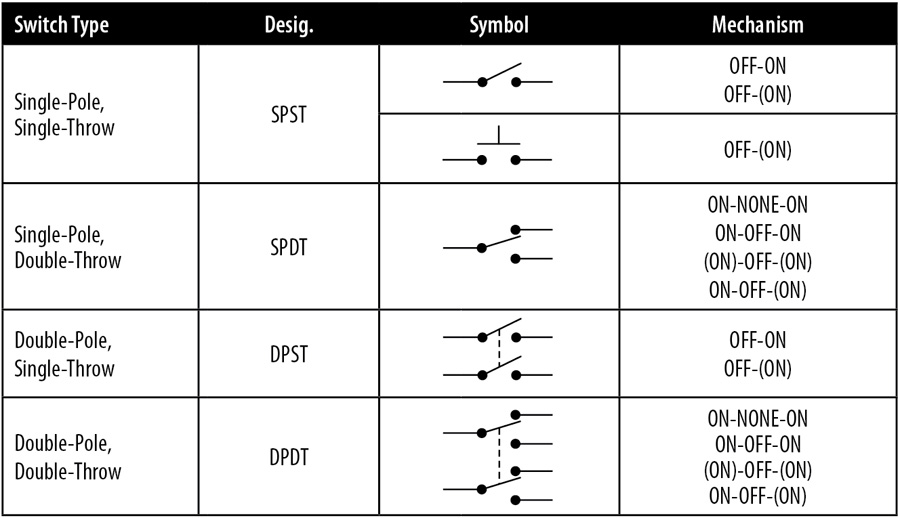 Avionics dealers that build instrument panels have a pretty good idea about what works and what doesn’t. Other sources for inspiration include looking at other airplanes, and burying your head in a Digi-Key catalog for hours. The following items should be considered when choosing switches:

• Availability in the current ratings that you need. If you’re wiring an airplane the traditional way, the switch must be capable of carrying the load that it switches. If you’re wiring with Vertical Power, you can choose almost any switch because there is negligible current going through the switch.

• Have a suitable connector on the back (a spade or ring terminal connection is preferred; some switches only come in printed circuit board formats, for example).

How you physically arrange your switches and what functions you decide to place on a single switch are important considerations. Some builders like to have switches in specific locations on the instrument panel and the stick because they were there on a previous airplane. Perhaps you like to arrange switches that match the workflow of using the switches. The starter switch, for example, can go on the stick or the instrument panel. Same with the flap switch. There is no right or wrong answer, only what you prefer. I recommend arranging the switches on a mock-up, and then do some hangar flying to see how it works for you. The ideas presented below are suggestions and should be modified to fit your specific needs.

Now let’s add a backup alternator. You can have two switches, one for each alternator, but you don’t want both alternators on at the same time. The best way to make this idiot-proof is to put both on a single switch, making it impossible to turn on both alternators simultaneously. You’ll want to use an On-Off-On switch, where the middle position is the “off” position. Figure 3 is an example of how this might be accomplished.

But now we’ve created an interesting situation. One of the purposes of the master switch is to cut power to the aircraft in case of an emergency. In the above scenario, if you turn off the master switch in flight (engine running, alternator on) then all you’ve done is disconnected the battery from the rest of the primary power distribution system. The alternator continues to provide power to the electrical loads (note that some voltage regulators work only with the battery present, while most others do not) which means power is present until both the master and alternator switches are off. 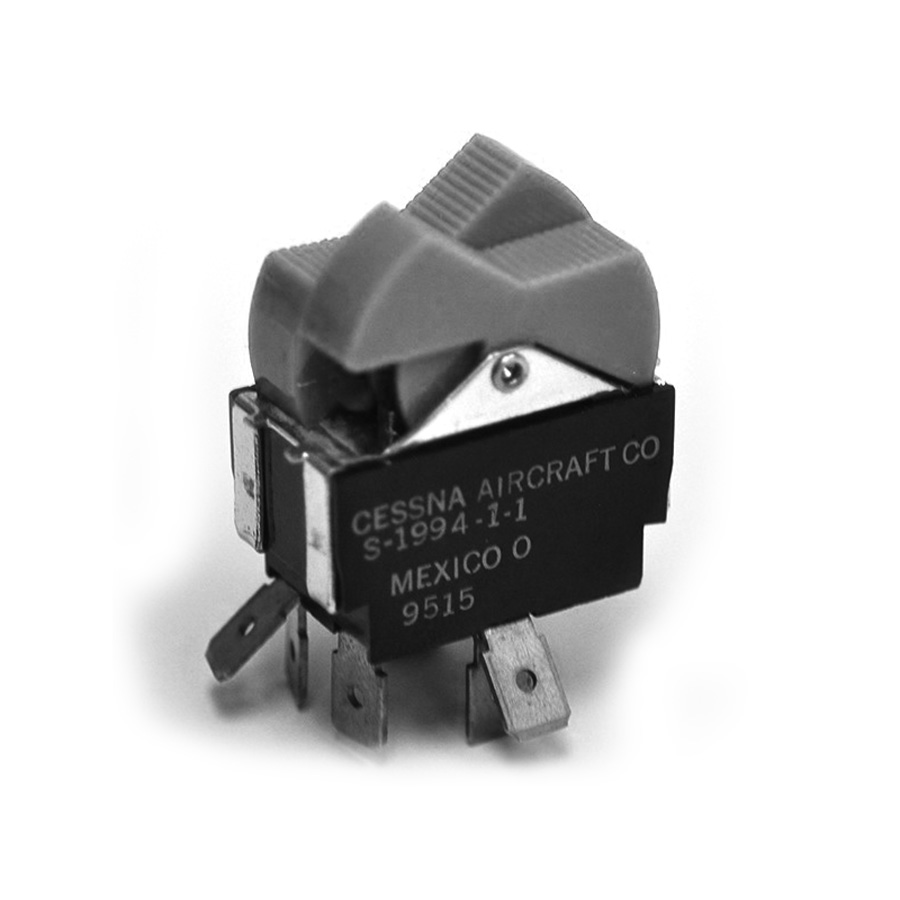 One solution is to use a split master/alternator switch.

This switch mechanically turns off the alternator when the master switch side is turned off. Electrically, it is like having the master and the alternator switches on two different switches. However, there are some limitations to using this switch:

• It does not match the other switches (that’s good or bad, depending on your perspective).

• It can only be used for a single alternator. In newer certified aircraft (or older twins) with two of these switches there are two independent buses, and each split switch assembly is used to control an independent battery contactor and alternator. The dual-bus configuration is not necessary for the vast majority of Experimental aircraft.

• The second alternator on a single bus system would need to be controlled by a separate, non-mechanically linked switch, and that defeats the intended purpose. Therefore, this switch is best used for single-bus, single-alternator configurations.

To cut field power to a single alternator when the master is turned off, we can accomplish this with a little bit of extra wiring as shown in Figure 5.

It becomes a bit more complicated with dual alternators (Figure 6) as you’ll need a 3PDT (3-pole, double-throw) switch for the master. DPDT switches are easy to find, but 3PDT are more difficult. Be sure the switch family you choose has this type of switch available, and it can handle up to 5 amps current.

Let’s consider additional switches for a more advanced aircraft. Consider adding the following switches if your mission requires it:

Trim Power Disconnect: If you’re not using a solid-state trim controller, and instead using a relay deck to control your pitch trim motor, consider adding a switch to disconnect power in case the relay fails. Of course, for additional safety, you can add a disconnect to any trim controller. Normally, a disconnect is wired only on the pitch-trim axis because it is the most sensitive.

Note that once trim power is removed, the electric trim motor cannot be moved and may be stuck in a hazardous position. Do not turn power back on in the air if you believe the trim system is not operating correctly as it may make the situation worse. There are two ways to wire a pitch trim power disconnect, shown in Figure 8. 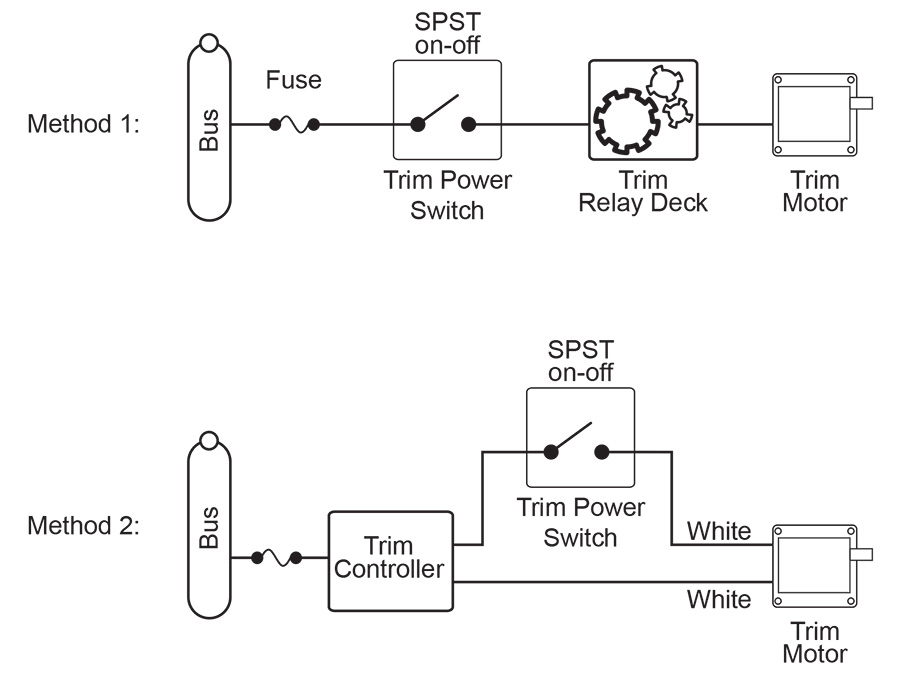 Pitot Heat: While flying in icing conditions is not recommended, pilots like to have a heated pitot tube “just in case” for those marginal conditions.

Dimmer: One or more dimmers for various instruments on the panel or footwell lights. Dimmer switches are actually knobs that rotate to set the dimming level. Clockwise rotation increases the brightness. Full counterclockwise turns the lights off, and a separate on-off switch is not necessary (Figure 9). 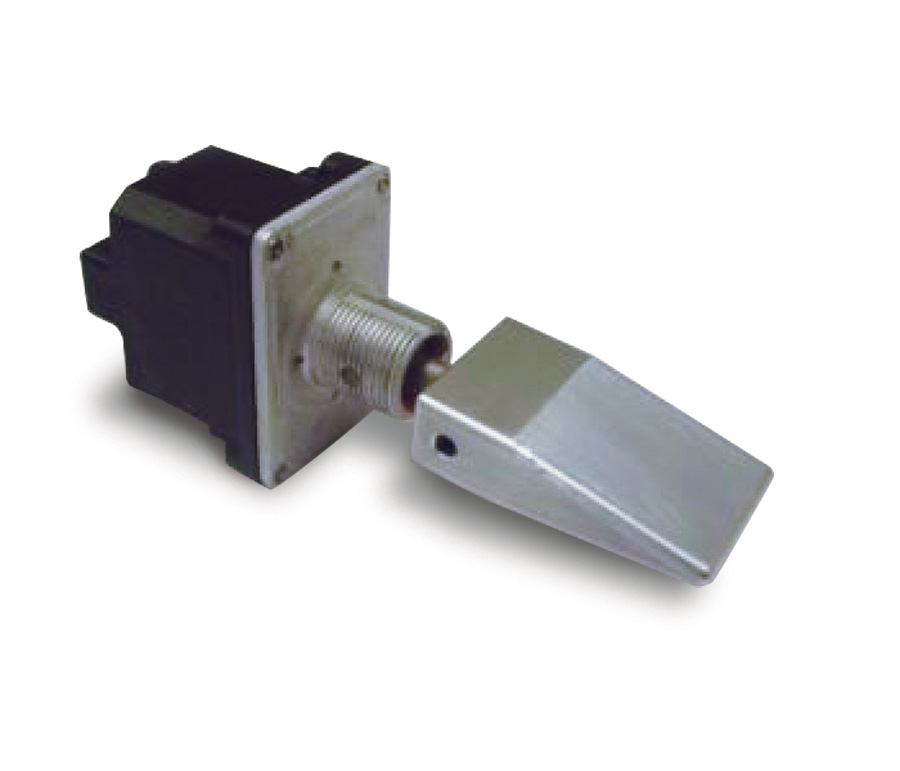 Cabin Lights: This switch can be on the panel, or more often near the light itself.

Flap Switch: If you’re installing electric flaps, you can install the flap switch on the panel or on the stick. If you install it on the stick, you need to install a separate flap controller (from Vertical Power or TCW Technologies) because the stick switch is not rated to handle the flap motor current. Flap switches that look like actual flaps can be purchased from shops that make instrument panels (like Aerotronics or SteinAir).

Starter Switch: This is normally a pushbutton switch or part of the magneto/starter combination key switch.

Multi-Function Switch: You may want to wire a switch where the bottom position turns on a device, the middle is off, and the top position turns on two devices. An example is a switch that turns on the nav and strobe lights. The example shown in Figure 10 demonstrates the basic idea, and you can modify it as needed for your particular application.

Figures 11 and 12 are additional switch layouts to consider. Figure 11 includes autopilot disconnect and pitot heat, while figure 12 puts seldom-used switches right-center, and switches used together on the far right.

Hopefully this article has helped your understanding of switch layouts when planning your instrument panel. It is an excerpt from my new book entitled Aircraft Wiring Guide. For more information, or to order a copy, visit www.aircraftwiringguide.com.