Isn’t it fun being a part of the Experimental aviation community? The airplanes we get to build certainly are fun to fly and outperform many of our certified brethren. But what seems to be most exciting in the last few years is the rapidly advancing cockpit displays. They are becoming almost like PCs in that you really need to wait until you are ready to install them, or you might miss some of the newer features. I know I can personally attest to that. When I built my RV-10 over four years ago, I installed a pair of the newest (at the time) Advanced Flight Systems 4500s, and I have been really pleased with them throughout the 700 hours of flying. Rob Hickman and his team at AFS have provided a constant stream of software upgrades over the years, all free. Rob is a pilot and uses his own stuff in an RV-10 he built, and he engages other pilots as beta testers for his products. 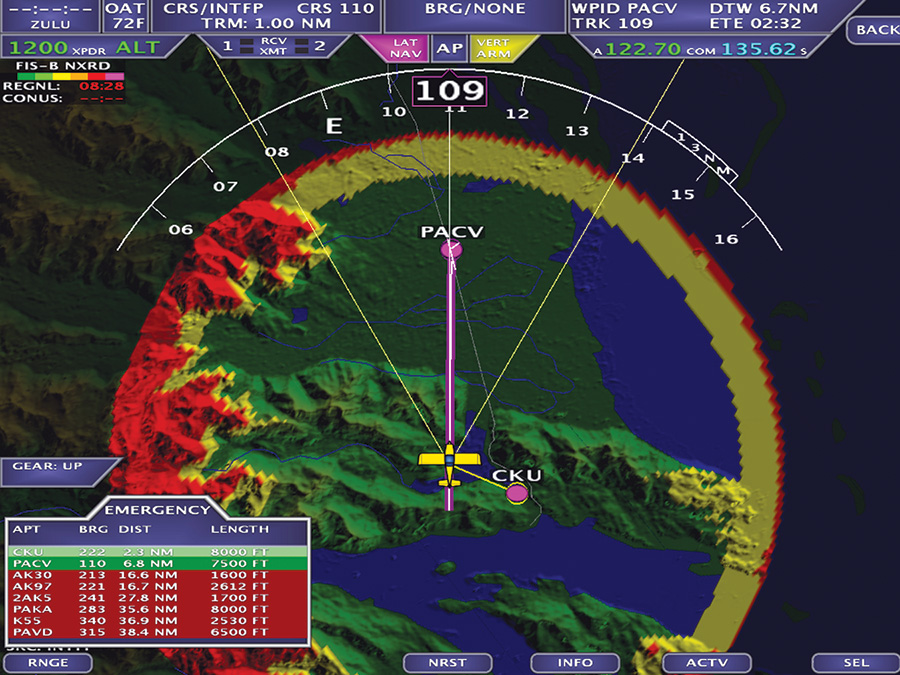 This is the emergency nearest function. It visually shows a ring around your aircraft with all available airports based upon glide range, terrain, and obstacles.

However, when I was at Sun ‘n Fun this past spring and saw all of the various manufacturers’ touchscreens, I certainly felt like I was missing some fun. Unfortunately, the touch feature required a hardware upgrade this time. Did I need it? No. But I sure liked the cool factor. And after having the iPad in the cockpit with ForeFlight over the last year, I knew just how much faster touch would work than scrolling through menu keys during high-workload situations. We also had the iFly 720 GPS in the cockpit, which is actually all touch. Luckily, Rob had a new 5400T that would be a perfect fit for my panel, with no modifications other than some minor wiring changes.

I have heard some noise about using touch in high turbulence situations, but even our “normal” avionics is pseudo touch. The closest comparison I can think of is the Garmin 330 transponder. Entering the squawk code requires pushing separate buttons on the front panel, not a whole lot different than pushing soft keys on a touchscreen. I’ve learned to just anchor my hand if it’s turbulent, even though every once in a while we get a good laugh when just as we want to hit a key on the iPad, there will be the bump that moves it up or down a line. Good thing there’s a backspace key.

So I decided to make the plunge and do the upgrade about a month ago, and quickly had the occasion to put over 55 hours on it via a concentrated two-week trip to Alaska and back. The trip included a little over eight hours of actual IMC and five instrument approaches, three of which were to minimums. Throughout the entire trip the screens themselves were flawless, and a whole lot of fun as well.

I have to tell you that my overall reaction to the synthetic vision, high-resolution terrain, and touch was that the workload is significantly reduced and you can accomplish tasks much faster. Get a new altitude assignment? Just touch the altimeter bar and enter the new number. The same goes for the baro settings, minimums, autopilot functions, and a myriad of other functions. No more scrolling through menus (although they are still there if you so desire). 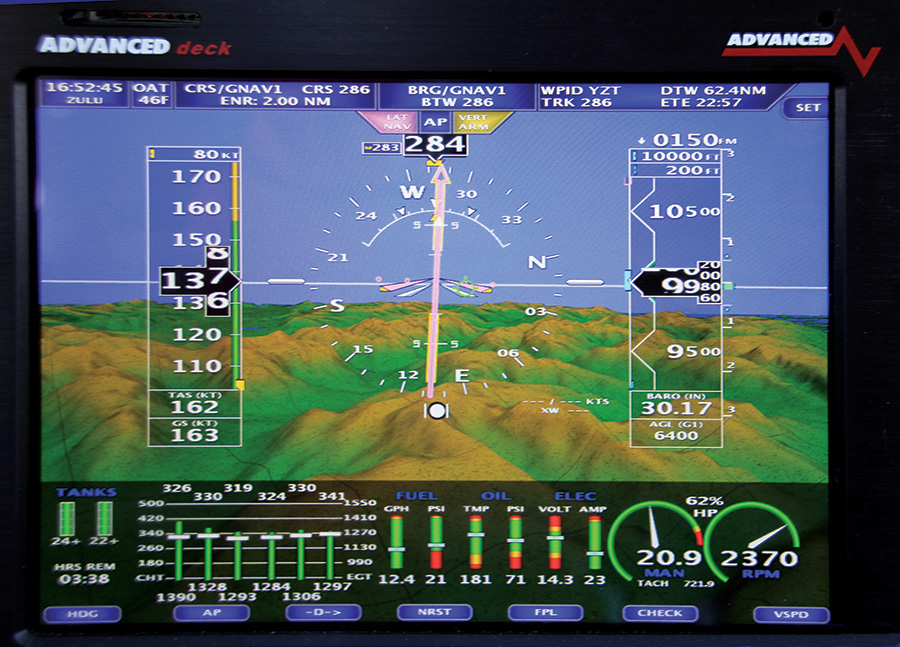 This was the view of the EFIS while solid IMC. Almost cheating, wouldn’t you say?

One of the coolest features was flipping the map display between sectional, IFR low en-route charts, moving map with high-res terrain, or approach plates as fast as you could point and touch the screen! I used this feature to the max while navigating the inland waterways, as well as the inland valleys and rivers. You really want to know exactly where you are in Alaska when down low, as a wrong turn can quickly get you into trouble. The stress in the cockpit on this trip was a whole lot lower than previous trips when confronted with less than ideal weather. I felt it was due in a large part to less heads-down time, as well as being able to retrieve information really fast when needed. Situational awareness has really been taken to a new level.

On top of the improved map functions, a really useful feature was the traffic display on the EFIS, with distance to the target imbedded within each target’s circle or diamond. This was really handy when flying the inland waterways in marginal conditions, as we could see the other aircraft (ADSB-equipped) and their N-number. Many times I radioed directly to them, calling them out by N-number, and received weather updates on conditions along our path. There’s nothing like a current weather update from a local pilot!

Another feature that was interesting was the ability to “wipe” the screen from left to right or up and down to quickly change the display. I normally fly with the left screen displaying attitude and engine data, while the right screen displays only the moving map. Many times along the trip, I wanted to compare the ADSB weather to the XM weather, and I could rapidly change the displays to do this. It sure was nice having ADSB weather up the entire coast of Alaska. Due to the satellite angle, XM seems to stop working around Ketchikan. Not the ADSB. And for some reason the ADSB weather was depicted much more accurately than I have seen it in the lower 48. I still like the XM weather presentation better in the lower 48.

On a side note, if you want to really get your airplane clean, it seems that spending 3 hours in the rain, snow, and ice between Ketchikan and Yakutat put a nice polish on the airplane that I hadn’t seen since I painted it! There wasn’t a bug anywhere. 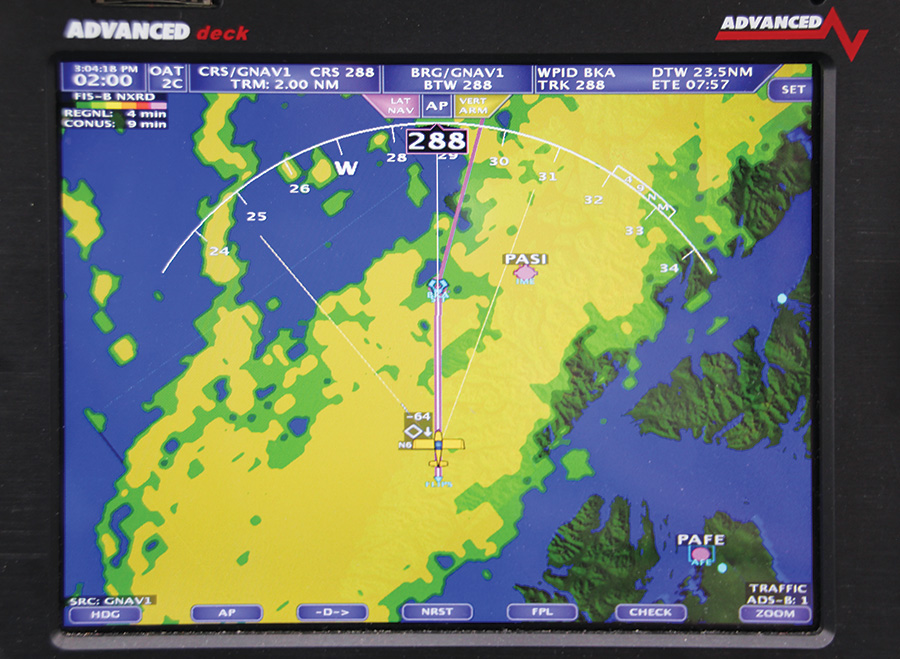 The ADSB weather and traffic was fantastic up the coast of Alaska. Here we are in the Sitka area at 7000 feet. Seaplane traffic below at 500 feet ASL.

I found one really cool feature that I almost wore out on the trip. If you select “nearest” and then “emergency,” the moving map display puts up a color-coded circle showing all of the airports within power-off gliding distance. You program your own aircraft best glide speed and glide ratio, and the computer does the rest. Unfortunately, in Alaska the circle was empty most of the time, but you probably already figured that out. However, I was really surprised at how many private bush strips there were, especially north of Anchorage. And they were presented as options. I did use this particular function to keep myself within gliding distance of the shoreline when we were out over the water, except for a few areas where we were crossing a body of water. I really like it!

The on-screen weight and balance is a really nice and convenient tool, especially when there is so much concentrated flying with varying fuel levels and loads. It allows you to visualize very quickly where your CG will be at takeoff and landing. And along with the interactive checklists, you can be pretty sure that you are safely configured for any aspect of flight. I even created one for Carol to pull up in case of pilot incapacitation. And of course on the last leg of the trip, the maintenance page reminded me that I was overdue for an oil change!

Any regrets? Nope. I doubt I have had enough time to even fully utilize all of the features. Sure, there are some areas that could be improved. I think some of the fonts could be a little larger, and I have spoken to Rob about this. I’m sure it has nothing to do with my age and vision! And I’ve learned there is a new preflight item to add to the checklist: clean the screens. You’ll figure out why the first time you try to clean them in flight like I did, and have an “Uh-oh, what did I just do?” moment. Perhaps Rob will put a touch disable button in a future release?

How Long Will it Take to Build?