Invention and experimentation in actual practice (compared to idealized fantasy) don’t usually offer up a straight line from concept to champagne-fueled celebrations of success. No way, no how. For every great idea perfectly executed, there are dozens of unsuccessful trials that are useful only for the experience they provide.

This is my small contribution.

My GlaStar is typical of the breed. The cowling surrounds a Titan IO-340 with conventional inlets up front and a lower exit area partly defined by a movable cowl flap. As with most early GlaStars, mine has an adjustable flap, a metal rectangle at the trailing edge of the lower cowling, roughly 20 inches wide, 9 inches deep, that comes  up to but does not touch the lower edge of the firewall. Hinged at the front, the flap is located with brackets outboard. Moving bolts to different holes in these brackets changes the angle of the flap and its distance from the bottom of the cowling, opening or closing the exit gap.

This was part of the design because the GlaStar was intended to have everything from the Continental IO-240 engine (which the prototype flew with) to an IO-360 of 180 hp. The airplane was also meant to be on small wheels as a trike all the way to carrying draggy floats. These configurations are at the extremes of cooling needs, so the flap was part of the original design rather than having different cowlings for different models or missions. I applaud Tom Hamilton, Ted Setzer and the rest of the development team for their forward thinking.

In the everlasting search for “better” from “good enough,” I decided to somehow “motivate” my fixed cowl flap so that I could find the best balance between cooling during takeoff and climb, and keeping the engine warm enough in the descent. (It doesn’t help that my Sensenich ground-adjustable prop is carrying a lot of pitch, so I’m usually descending at fairly low power.) Since I like to tinker in flight, I don’t mind the manual cowl flap. My Bonanza was a better-performing airplane for having one.

Another GlaStar owner showed me his system, which uses a Ray Allen servo on the firewall connected through a simple linkage to the flap. Easy, I thought, and spent a delightful few days mocking up such a system, modifying the cowl flap with some strategic reinforcements and wiring it up. For some reason I can’t identify, I had a suspicion the system wasn’t 100% going to work, so rather than cut holes in the panel for the switch, I elected to use one of the larger blank instrument holes on the copilot side and a temporary plate.

Testing on the ground looked promising, though I did notice some flex of the cowl flap laterally and the cowling bottom itself in the fore-aft plane. Proof is in the flying, of course, and with the help of a GoPro camera mounted so it could see the cowl flap in action, I took Charlie up.

The readings on the engine monitor were confusing, with the engine running cooler than I’d expected, though changing flap position did have an influence on CHT and, to a lesser degree, oil temp. But all things being equal, the engine was running cooler with the flap closed than before I’d made the mod—and that’s comparing to the fully closed setting on the manual flap. Hmm.

You can guess where this is going. Reviewing the video, it was clear that flex in the cowling was allowing the flap to sag open in flight. I had assumed that the cowl flap would be responding to flight loads by wanting to push closed—the air inside the cowling had to be moving slower than the air outside because it had to pass over the engine first. So it had to have forces on it trying to close the flap. I could correlate the video timestamp to data from my Garmin G5s to see that the faster I flew, the more the cowl flap wanted to pull open.

I understood what was wrong, but did I want to fix it? To salvage the project, I’d have to reinforce the lower cowling, which wouldn’t be hard from a materials standpoint. (My hangar neighbor won’t notice a bit of vinylester missing.) But the modified Van’s filtered airbox runs close to the cowling where I’d want to reinforce it, and besides, after years of the previous Lycoming leaking like a puppy all over the place, it wouldn’t be an easy clean up for good bonding.

At this point, I decided that my Quixotic desire to have the CHTs and oil temps in a narrow range during all seasons and all flights was just not worth the effort.

I’d hoped that the flight-adjustable cowl flap would help my fall/winter oil temps, which were too cool. (In the 150° range.) For that solution, I went off the shelf, with the Airflow Systems oil-cooler duct valve. It was an easy installation and allows me to keep the oil temps at or above 180° during cruise. In theory, the engine’s vernatherm is supposed to keep the oil temps at some ideal, but it doesn’t; with the big, 13-row oil cooler I have, the air valve is the best alternative. I should have done this before I even started messing with the in-flight-variable cowl flap. Live and learn.

A few readers have pointed out that Jonathan Apfelbaum’s sidebar to the “Prop Job” article flopped the explanation of climb versus cruise fixed-pitch props. A fine-pitch prop does allow the engine to spin faster, which increases horsepower available to it, and therefore aids both initial acceleration and rate of climb. But it also limits cruise because the prop soon unloads and you have to reduce throttle to keep engine speed in check. Just because a fine-pitch prop makes more power available doesn’t mean you can effectively use it.

A coarse-pitch prop gives up some takeoff and climb performance mainly because the engine is operating down in the rev range and making less power. But once in cruise, you can load the engine more effectively and allow the bigger bite the blades are taking to move you along at a higher speed. Fixed-pitch props are always a compromise. 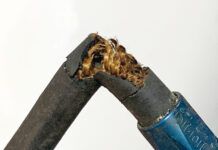 Marc Cook - June 11, 2010
0
The Fourth Annual Electric Aircraft Symposium gathered an elite group of movers and shakers who are doing some exciting things with electric motors and other fuel-efficiency technologies. By Marc Cook.