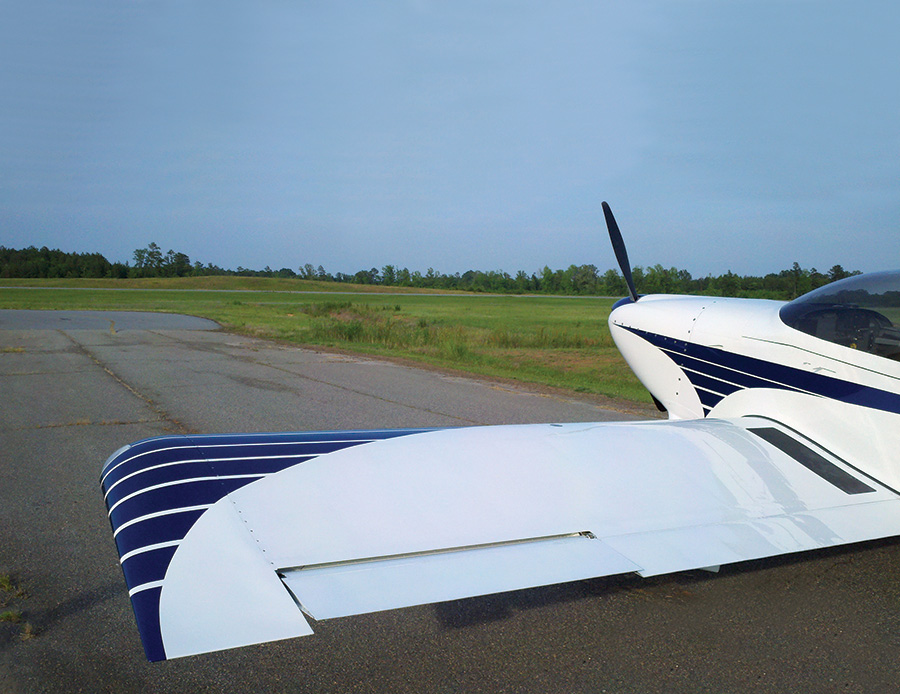 There is a reason the FAA requires a minimum test period for Experimental/Amateur-Built aircraft—test flights don’t always go as planned. For aircraft with an approved engine/propeller combination, the Phase 1 test period is typically 25 hours. For everything else, 40 hours is the norm. However, longer test periods may be granted if the examiner feels it is warranted. In addition, Phase 1 flights are restricted to people essential to the flight.

These restrictions are in place to protect both the general public and people who directly participate in Experimental aviation. This story is based on true events and highlights why it is important to follow these rules. The name of the pilot has not been changed because I was the pilot involved.

On August 7, 2007, RV-9 N941WR made its maiden flight, pulled aloft by the mighty 135 horses produced by my Lycoming O-290-D2B. The airplane and engine performed flawlessly. However, there was a build error that I had made that would soon raise its ugly head.

My goal was to build a simple day- and night-VFR cruising machine with minimum instrumentation. However, those plans were soon set aside when I realized that with the advent of modern electronic flight information systems (EFIS) and engine monitoring systems (EMS), I could equip my airplane with more capability than I had dreamed about when I drove that first rivet four years earlier—and I could do it for a lower cost than I thought possible.

Even though I was planning to install a fixed-pitch propeller, I elected to install a manifold pressure sensor and fuel flow sensor to complement the EMS, along with four CHT and EGT probes, and a carburetor temperature probe. It was the fuel flow sensor installation that came to haunt me midway through the Phase 1 test program.

I knew enough to seek advice before modifying my fuel system, and the wise sages I consulted suggested—no, insisted—I make sure that once the fuel line leaves the gascolator there would be no low spots to collect water. With that in mind, I mounted the fuel-flow sending unit directly above the gascolator, connected with an aluminum “U.”

This worked great until about 21 hours into Phase 1 testing. At this point the engine was well broken in and my test card called for some slow flight. You remember slow flights, don’t you? High angle of attack, high power settings, lots of right rudder, low airspeed, and not much air through the cowl to cool things down. 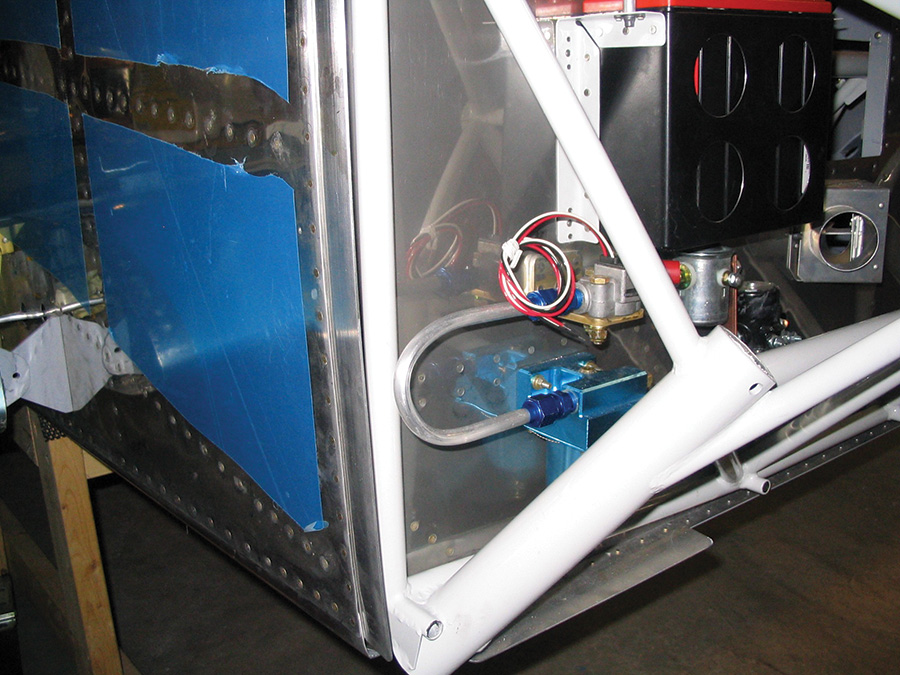 This uninsulated aluminum “U” picked up enough heat during slow flight to cause the fuel to boil and vapor lock.

That’s when the first indication I might have an issue raised its ugly head. After flying around in slow flight, I reduced the throttle to idle, performed a stall, and rode the stall down in a slow decent, using the rudder to keep the wings level. It was then that the engine just quit, stopped cold, prop straight up.

OK, I still had 3000 feet to find a spot to land, trimmed the plane for best glide, started heading for that private strip that was just off to my left, checked the fuel valve, mags on, and pressed the starter. Thank goodness! The engine caught on the first blade and it was time to return to base and find out what was going on.

I pulled the cowl and found nothing—not a loose wire, not a fuel leak, nadda, nothing, zilch! Now what? Well, let’s go for another flight! It’s an interesting feeling flying a plane that you know has an engine that may stop turning money into noise at any time. But after an extended run-up, it was as solid as before the prior flight. The second test flight of that fateful day was completely uneventful, even with the same flight profile as before. 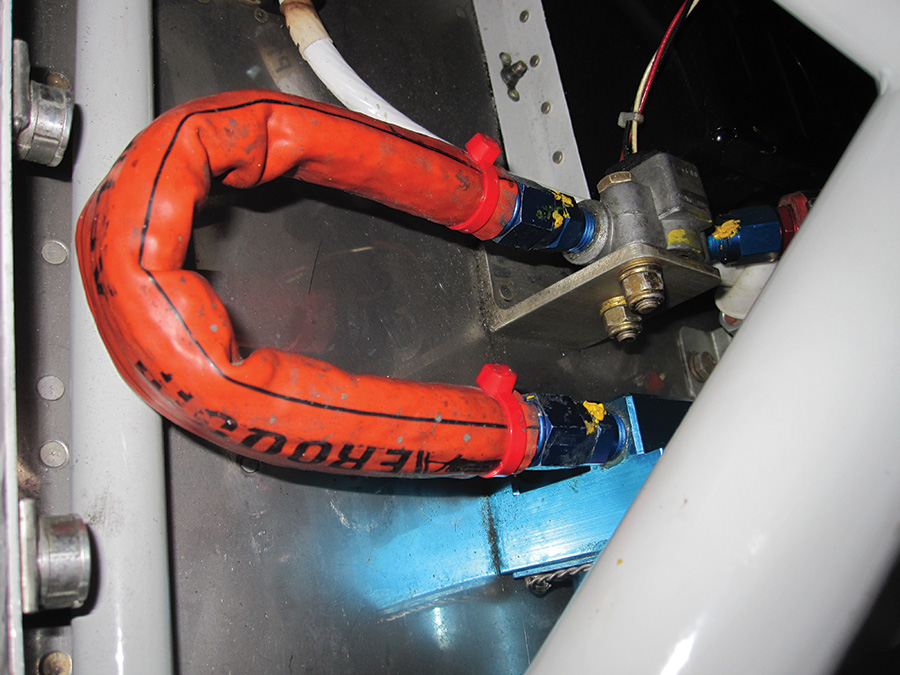 The solution was to insulate the line from the heat of the engine compartment using firesleeve. After five years and 500+ hours, the author decided to improve the installation.

The second time the engine stopped in flight was after entering the pattern after doing some low-power cruising and following a non-descript production aircraft in what must have been a world record for large patterns. As before, it was with a low airspeed and low power setting when the silence struck again. A quick push on the starter and the engine fired right up. Now I was on to something.

I performed one more test flight to confirm my suspicions. During long flights at low power, I noticed the carb temp would rise. My assumption was that the heat rise was due to the decrease in airflow through the cowl and the increase in heat must be vaporizing the fuel in the system, but where? Sure enough, another long flight at low power settings, followed by another engine stoppage, confirmed my hypothesis. In a strange twist of fate, at the conclusion of that flight, I once again found myself on long final due to traffic. Once again, the engine made that noise which caused me to clench my seat cushion. And once again, pressing the starter button restored the seat cushion to its normal configuration.

After de-cowling, I pulled up a chair and gazed at my engine compartment for what seemed like hours, but was probably about 10 minutes before I realized my error. The elbow I installed between the gascolator and the fuel flow meter was not insulated. It must be this simple bare section of aluminum that is heating the fuel during extended flights at low power settings. Scrounging around my hangar produced a section of firesleeve just long enough to cover it. I secured the firesleeve with dime store zip ties and went for another test flight.

The fifth test flight since the first engine stoppage was uneventful—and so has been every flight since then. Well, that’s not exactly true; let’s just say that the engine has stopped stopping unexpectedly in the intervening 512 hours.

Doing it Right the Second Time.

When KITPLANES® editor Paul Dye contacted me and asked for “lessons learned” type articles, he and I went back and forth on a few ideas. When I mentioned my four engine stoppages during my Phase 1 testing, he perked up and asked me to write it up. It was then that I had to confess that my engine compartment still contained that aluminum U, covered by firesleeve and secured by those dime store zip ties. 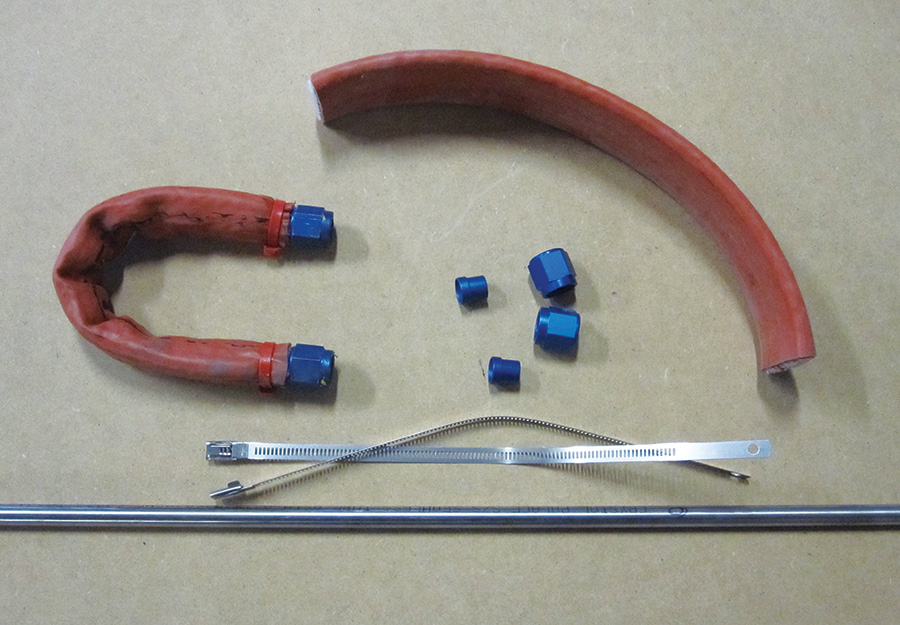 OK, OK—five years and 500+ hours is probably a good time for me to correct my installation. Rather than just replacing the zip ties, I have been hearing some rumblings that aluminum tubing should not be used forward of the firewall. So, maybe it was time for a fuel line upgrade.

Even though both the gascolator and fuel flow meter are secured to the same structure and cannot move relative to each other, there is a chance the aluminum tubing might crack over time, or so the theory goes. “Over time” is an interesting concept to me; does it mean in 5000 hours or in the next five hours? The more I pondered that, the more the thought of a fuel-fed engine fire was keeping me awake at night. With that in mind, I ordered some 304 seamless .035 stainless steel tubing and stainless steel snap straps to make a replacement “U.” (I already had extra firesleeve and AN fittings in my parts bin.)

After spending the morning measuring, cutting, bending, and then doing it all over again because I simply like making parts twice, I finally had what I thought was a serviceable part. (Don’t even ask how I managed to let the AN819 coupling sleeve slide to the wrong side of the bend!) 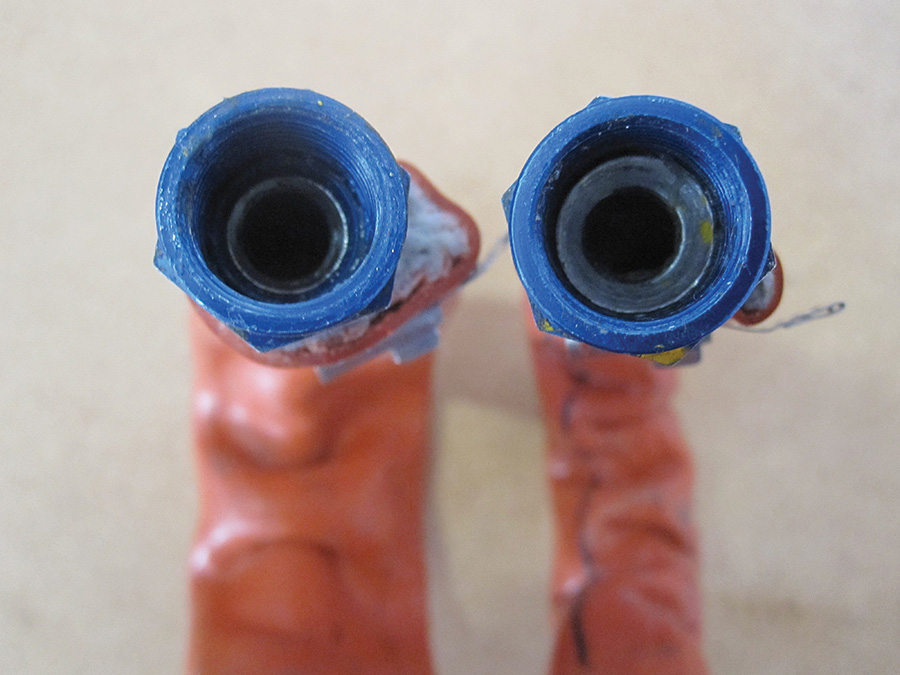 Although the new stainless line on the left fit nicely, close examination of the flares showed them to be under-formed; a good seal was doubtful, compared to the aluminum line on the right. Flaring stainless with average shop tools is difficult and care must be taken to inspect for proper dimensions.

This prompted me to call two aviation experts, Michael Porter, IA and restorer of anything with fabric or radial engines, and Tom Swearengen, proprietor of TS Flightlines, which manufactures Teflon hose assemblies for Experimental aircraft. 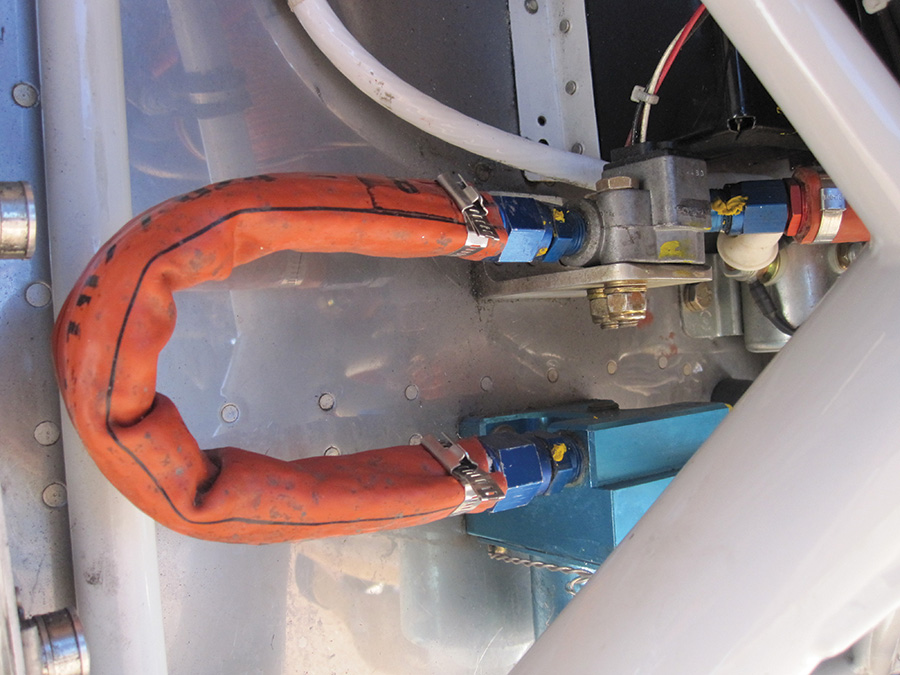 The original aluminum line installed with proper metal banding to hold the firesleeve in place.

Porter mentioned he has seen a number of certified airplanes with aluminum tubing forward of the firewall that, like my installation, terminated at fittings that could not move relative to each other. However, he strongly suggested any aluminum tubing forward of the firewall should be wrapped in firesleeve. He went on to say that the aluminum tube installed on my firewall would be fine since both ends were supported by the firewall. If I was insistent on replacing the aluminum “U,” he suggested I have a braded, firesleeved, stainless steel flex line made.

Swearengen, like Porter, was helpful and a wealth of information. When we discussed the flare—or lack thereof—that I was able to make in the stainless steel tube with my Parker flaring tool, he was not surprised. And based on my description, he strongly suggested I not use my newly created, but under-flared “U.” Swearengen went on to say that he has a high-pressure hydraulic press to flare stainless steel and offered to make a “U” out of stainless tubing, or build up a braided, firesleeved, stainless steel line. He also went on to say that my aluminum “U” should be OK, but he preferred stainless for everything firewall forward. With the input from both Porter and Swearengen, I elected to retain the original aluminum “U,” but replace the dime store zip ties with stainless steel snap straps.

Bill Repucci was handed his Private Pilot’s certificate back in the days when the written test was taken with a Number 2 pencil. At the time, Bill was told that he now had a “License to Learn.” And learn he did, mostly that there was humor buried in the quirky ways of those of us who call ourselves aviators.

Marc Cook - June 24, 2007
0
Taking a measured, conservative approach to the development of new technologies and basing decisions on real-world experience rather than hearsay is the best way to move forward in homebuilding.