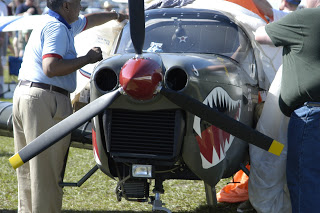 The folks at InDUS Aviation, manufacturers of the Thorpedo Light Sport Aircraft and kit have done it again. The Thorpedo was the first new LSA on the market several years ago, and today the company is proud to show off a Thorpedo that sips Jet A. Yes, you read that right. This LSA has a Wilksch WAM diesel engine under the cowling.

The engine, a 120 hp, 3-cylinder, two-stroke, turbocharged inverted Diesel has all mechanical linkage and is the only ASTM compression ignition compliant engine available. It has a mechanical control unit and automotive glow plugs. Cruise fuel flow is 3 gph, which gives the Thorpedo a 500-mile range at 100 knots.

The engine, designed to produce 120 horsepower, was originally conceived to be a direct replacement for the Continental O-200 engine. It weighs 269 lbs, including fluids and prop. The cowling of the Thorpedo was recently tweaked for efficiency and cooling by none other than the speed experts at the LoPresti “skunkworks” in Vero Beach, Florida, and will undergo additional mods to eke out a few more knots with the WAM engine.

“We’ve tested this engine for 4 years and more than 400 hours in England,” explained InDUS Aviation founder Dr. Ram Pattisapu. “This airplane is designed to be green, and also to address the need for LSA aircraft around the world. Outside of the U.S. we don’t have the luxury of easily available and affordable avgas. A strong, light Diesel engine is the answer there,” he says.