Last month we began exploring how the various components of the airplane affect the center of gravity (CG) of the empty airplane. We now continue our study of how to balance a new design with a look at how the overall configuration of the machine affects its CG. As before, we will confine our discussion to single-engine piston-engined airplanes although the general principles discussed hold true for other types of powerplants.

Because of this, it’s useful to classify configurations by where along the length of the airplane the engine is mounted. Each placement has specific effects on the CG and issues that must be dealt with.

By far the most common configuration of a single-engine airplane is a tractor configuration with the engine mounted on the front of the fuselage, driving the propeller directly. It’s not an accident that this configuration has become conventional since it offers many advantages, one of which is that it is relatively easy to make it balance.

Mounting the engine at the front of the fuselage pulls the CG forward. The empty CG of the fuselage with the tail and engine mounted is aft of the firewall, in a place where it is relatively straightforward to mount the wing so that its aerodynamic center (AC) is at or near the empty CG of the airplane. Similarly, there is enough room just aft of the firewall to place the cockpit so that the weight of the pilot and passengers are near the empty CG or centered around it. This has the great advantage that the CG travel of the airplane for various combinations of pilot and passenger weight will be relatively small.

The primary disadvantages of a conventional tractor from a balance viewpoint are the effect of a very heavy engine and the problem of where to put baggage. If the airplane has a very large (heavy) engine for its size, it may tend to become nose-heavy. (In reality, its hard to design a truly nose-heavy airplane since the CG has an almost mystical propensity to migrate aft as the design matures). In extreme cases, particularly for single-seat airplanes like racers and aerobatic airplanes, it may be necessary to move the cockpit significantly aft and use the weight of the pilot to counterbalance the weight of the engine. This can cause issues with forward/down visibility for the pilot and significant CG travel with differences in pilot weight.

Where to carry baggage or cargo is a bigger issue. This will be discussed in more detail in a future edition of “Wind Tunnel,” but the fundamental issue is that the volume available for a baggage compartment is in the fuselage aft of the cabin. This is quite a ways aft of the flight CG. Loading weight into the compartment will move the CG aft. This will cause CG travel, and the maximum baggage weight the airplane can carry is likely to be limited by CG considerations rather than gross weight.

In a mid-engine configuration, the engine and the cabin swap places. The engine is mounted just aft of the cabin. The vast majority of mid-engine airplanes have pusher propellers, although there are a few examples (Bell P-39, Bell P-63, Bugatti Racer) of airplanes with tractor props driven by extension shafts from mid-mounted engines.

A major reason to swap the engine and the cabin is visibility. If the crew is seated ahead of the engine, they have a clear view ahead and down, and do not have to look over the engine.

Once the cabin and engine are positioned, we must now address the issue of the propeller. Here the designer has two choices:

Using an extension shaft allows a mid-engine airplane to have a well faired, gradually tapering afterbody to minimize drag. This is offset by disadvantages due to the weight and mechanical complexity of the shaft drive system. There have been a few successful extension-shaft pushers, notably the Cirrus VK-30, the Taylor Mini-Imp, and the airplane that most inspired me growing up: Ed Lesher’s record-setting Teal. Despite this, the disadvantages of the extension-shaft approach are daunting, and the configuration has not been widely adopted.

Direct-drive mid-engine pushers are seen in several areas, notably Light Sport or ultralight airplanes and amphibians. There are several configuration approaches used to get the tail surfaces mounted aft of the prop. For some amphibians, we see a relatively conventional full fuselage (albeit with a boat-hull bottom) with the engine mounted above it on a pylon.

Twin booms were used on the Anderson Greenwood AG-14. The design was type certified in 1950, but only five were built. Performance is similar to a Cessna 150.

Mid-engine pusher land planes and some amphibians use some variation of a pod-and-boom configuration. The fuselage is abbreviated to a pod containing the cabin and engine, and the tail is mounted on a boom (or booms) that passes aft outside of the propeller arc. There are many variations on the theme. The most common two are the low-boom approach and twin booms.

In the low-boom configuration, a single boom connects to the lower side of the pod and passes under the propeller. This approach is seen on the Seabee amphibian and many ultralight and Light Sport airplanes like the Kolb line, the RANS S-12, and the Earthstar Gull designs. The single-boom approach has several advantages. The control runs to the tail are simple. The low boom protects the propeller to some degree, and with the low boom, it’s relatively straightforward to mount a tailwheel if a taildragger landing gear is chosen.

The primary disadvantage of the low-boom approach is that it forces the engine to be mounted relatively high to allow the boom to pass under the propeller. This makes the engine more difficult to fair in aerodynamically and causes some pitch trim changes with throttle. 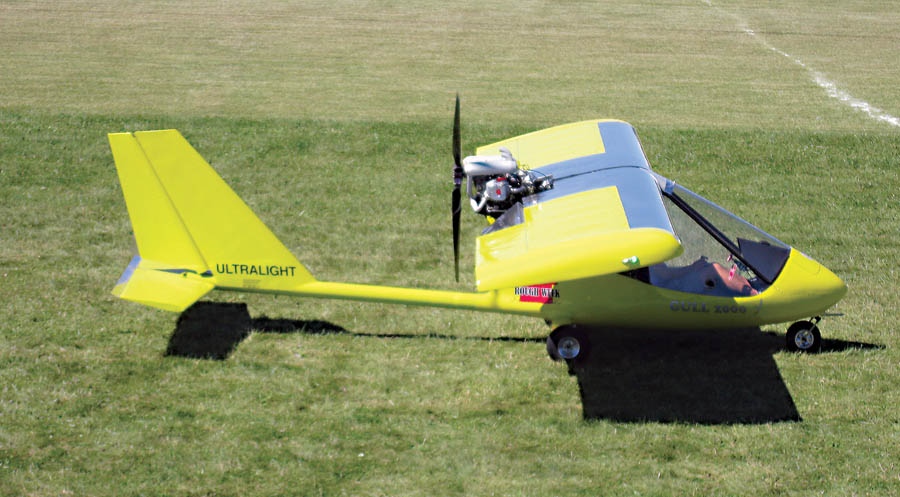 The Earthstar Gull 2000 is based on a low-boom configuration. A single boom passes under the propeller and connects the tail to the forward cabin.

Another approach is to support the tail on twin booms that attach to the wings. The twin-boom approach lets the engine move down, but is heavier and more mechanically complex than the low-boom configuration.

Mid-engine airplanes will generally have more CG travel than tractor-engine configurations. Swapping the engine and the cabin moves the mass of the engine well aft of the flight CG. This moves the empty CG of the airplane aft, usually to a point behind the aft CG limit for safe flight. The farther-aft CG of the empty airplane is then counterbalanced by the forward-placed weight of the pilot and (sometimes) passengers. Because the people are now well forward of the flight CG, the CG will move significantly in response to changes in pilot and passenger weight. The airplane must be able to fly safely with just a very light pilot flying solo or heavy people in every seat.

The mid-engine configuration remains viable primarily because the engine is not moved too far aft, and therefore the overall CG travel, while larger than a tractor airplane, is still manageable without dramatic changes to the aerodynamic configuration of the wings and tail.

On a few airplanes, the designer has mounted the engine at the aft end of the fuselage to produce a pusher configuration without booms or an extension shaft. This configuration is the most problematic from a balance viewpoint for several reasons:

The first is that it will have a lot of CG travel. The airplane is now a giant seesaw with the engine on one end and the pilot on the other. Changes in pilot and passenger weight will cause large changes in loaded CG.

Another issue is that the empty CG will be well aft of the flight CG. This causes landing gear issues because if the main gear is placed properly to allow easy nose-up rotation for takeoff, it may be forward of the empty CG, which will cause the airplane to tip over backwards when the people disembark. Moving the main gear aft enough to prevent this might make the airplane difficult to rotate for takeoff, and cause hop-off issues at forward CG positions. Another approach to solving this is used on the Rutan canards, which is to “kneel” the airplane by retracting the nose gear on the ground to tip it forward and prevent it from toppling over backwards. 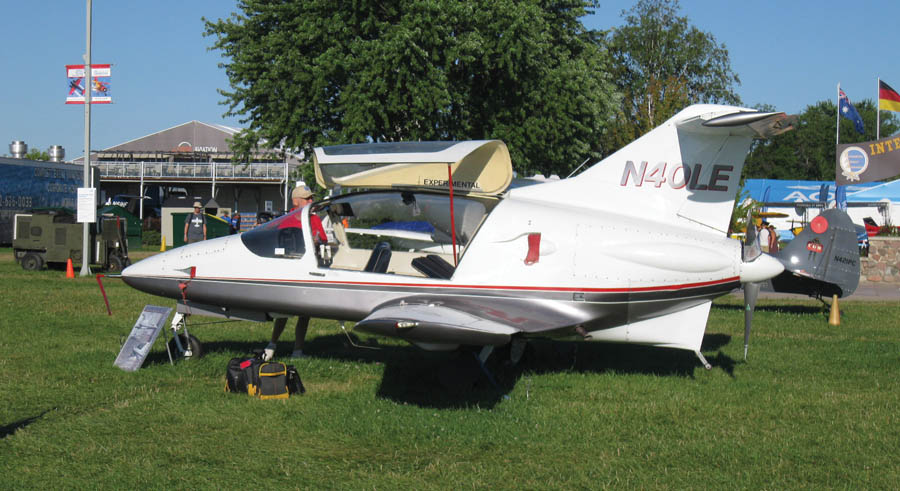 A rear-engine airplane like the Prescott Pusher is very challenging aerodynamically because the flight CG is so far aft on the fuselage. Notice the wing is also far aft, and the tail arm is very short.

A rear-engine airplane is also challenging aerodynamically because the flight CG is well aft on the fuselage. This makes it extremely difficult to get a conventional aft-tail aerodynamic approach to work because the wing must be very far aft, and the tail arm is very short. The ill-fated Prescott Pusher is an example of an attempt to make this approach work.

The other approach to a rear-engine airplane is to embrace the far-aft CG and use a canard configuration. The Rutan canards and their aerodynamic descendants are successful examples of how this approach can be made to work.

Barnaby Wainfan - May 22, 2014
0
Aeroelasticity—structure with a twist.