MGL Avionics has announced its new V10 VHF radio transceiver, the first commercial product whose audio processing and much of the transmitter and receiver circuitry is digital, with the commensurate outstanding quality, the company says. The VHF airband transceiver is based on modern digital signal processing, and has a built-in multi-mode, dual-circuit intercom.

The V10 fits in a 3.125-inch instrument hole and has a mounting depth of 2.2 inches with connectors. It offers 6 watts of transmit power and weighs only 8.8 ounces. The intercom (not a hot mic, but usable as a primary intercom), has two channels, and can be used in a four-place aircraft by connecting multiple headsets to the passenger channel. Modes include VOX operations and the company’s proprietary VOGAD (voice-operated gain adjusting device), which works by adjusting the gain of the mic as you speak based on voice level. This effectively eliminates background and engine noise between words, and can be used with passive headsets to get results similar to a noise-canceling headset, according to MGL. One hundred channels with alphanumeric frequency name and function appear on a sunlight-readable LCD display. There are 10 Garmin/Icom compatible frequency lists. 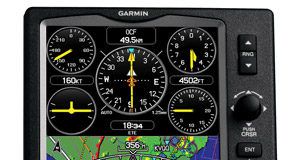