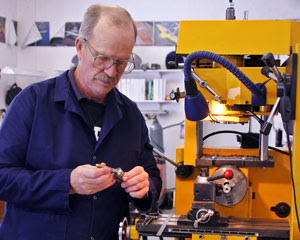 Occasionally I receive a letter from a reader that offers an insight a bit beyond the expected. An especially well-informed source, Rawson M. (great first name!) recently wrote to relate his experience working for an unnamed aircraft company. The subject of his letter was a recent installment of “The Home Machinist” in which various methods of cutting sheet aluminum were examined. The results were less than stellar when using a common router.

In another “Home Machinist” I had sneered at a kit manufacturer’s suggestion of using a disk sander to shorten a cylindrical bearing spacer.

Rawson wrote, addressing both of these subjects.

“I worked for a major aircraft company for 14 years. Routers are used to trim the ends of fuselage sections and the passenger door openings. Hand-held power saws were used to cut aluminum plate. Large disk sanders were used to trim parts to dimension. 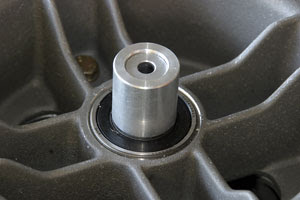 “I was not a mechanic so I can’t report on the specifics, carbide cutters, etc., but did use the technique by using my 10-inch table saw with a carbide blade to cut 0.25-inch aluminum plate and 0.25-inch wall aluminum tubing for a boat radar antenna mast. A 10-inch sanding disk worked well to dress the corners of the plate to the desired curves.”

Many years ago I’d heard that a router was used to cut window openings for the Concorde, but in that the story was 20th-hand, I didn’t put a lot of credibility to it. Rawson, on the other hand, is firsthand.

As for using a disk sander, in his examples of the door curves I can’t think of what might work better. Additionally, putting an entire fuselage section on a lathe is a bit more than difficult, so there a sander is also the best tool.

However, “The Home Machinist” is directed to lathe owners, and in the case of a 2-inch-long cylindrical bearing spacer, there is a better tool: a lathe.

So in retrospect I have to accede to Rawson’s side of the issue by simply acknowledging that sometimes the best tool may be a rock.

Rawson, thanks for the confirmation of the router story and an illustration that the rules are not laws, only guidelines; think outside the box.