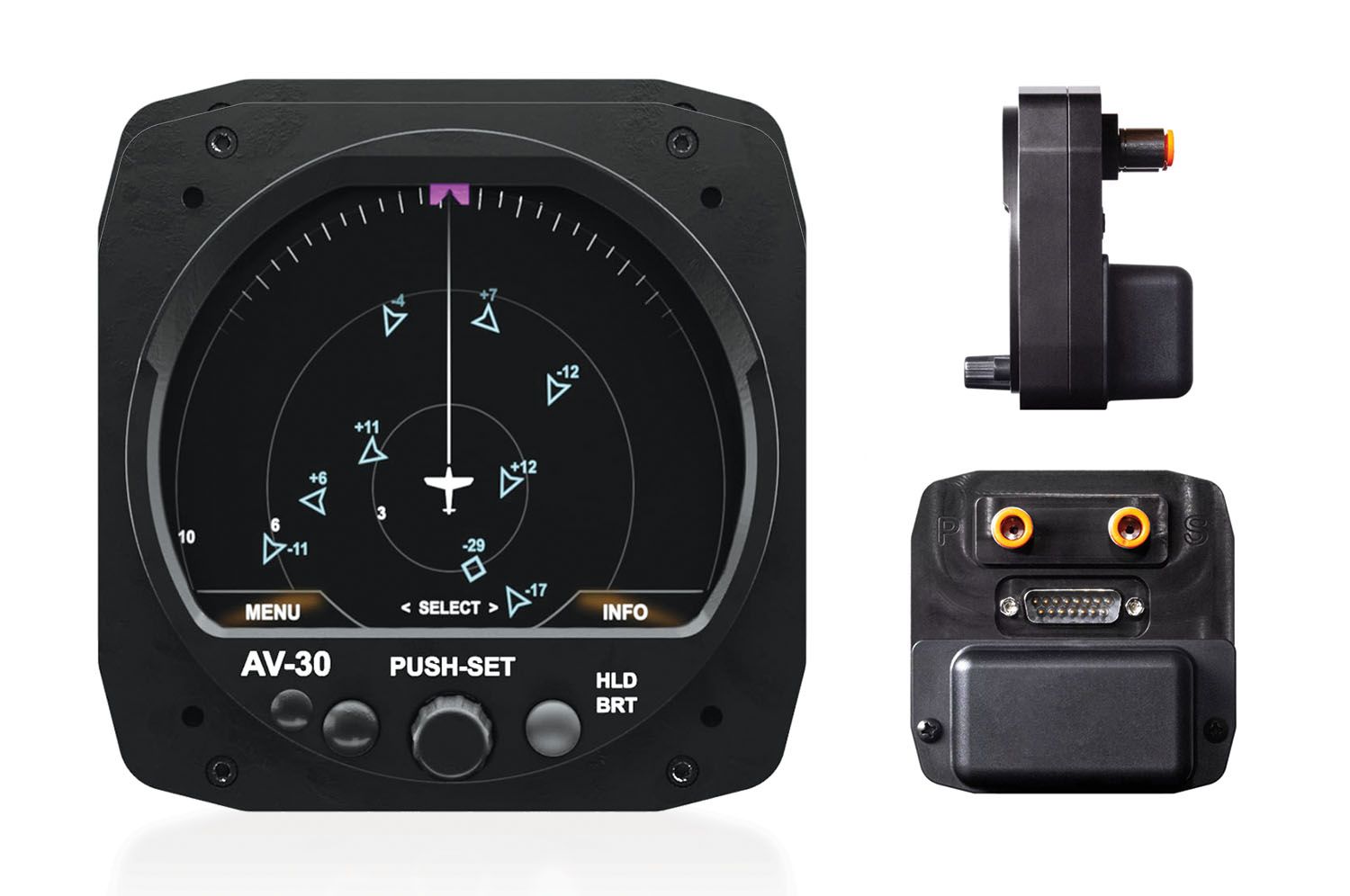 uAvionix is, among avionics manufacturers, fairly brazen when talking about potential future product. When it introduced the AV-20 and AV-30 round-format electronic flight instruments, the company made it clear that more capabilities would be added later through both software updates and hardware additions. I mean, we usually assume that’s the case, but uAvionix has been pretty open with the “but wait, there’s more” approach. For the large AV-30, which fits into a 3-1/8-inch instrument hole, the upgrades have come in the form of a $299 “dongle” by the name of AV-Link that adds traffic and Wi-Fi capability.

Let’s take a step back and understand why an external module is in play now. Because the AV-30 is compact, it has a relatively small 15-pin D-sub connector. It doesn’t take long to use all the pins. Two are for power and ground; two for an optional OAT; and two for an audio output. For connectivity, the AV-30 has one RS-232 serial input for an external GPS; one two-wire, bi-directional RS-232 for connecting to the tailBeaconX Mode S transponder; and two labeled “spare serial, do not connect.” The three remaining pins are labeled “mfg serial,” and are used to do computer-connected software updates without the AV-Link, and to communicate with and power the AV-Link when it’s installed. If you’re counting, that’s all the pins.

So when it comes time to expand the AV-30, the choices are some form of outside networking box (presumably that is what the “spare” serial would be for) or to do the work wirelessly, which is how we get back to the AV-Link; it uses Wi-Fi to bring traffic into the box and to allow over-the-air software updates.

Using a portable ADS-B In system, the AV-30 can display ADS-B traffic on a new, dedicated traffic screen. The AV-Link is said to be compatible with a range of portable ADS-B units using Wi-Fi, but I tested it with a Sentry in the pilot’s side rear window of my GlaStar. The AV-30 can accept GPS input from the Sentry, from a connected tailBeaconX or from a panel-mount unit, with which it’ll show nav data, course lines and other features.

As before, pressing and holding the main rotary knob will cycle among the displays: attitude/EFIS, DG/HSI and now traffic, dubbed the MFD page by uAvionix. Also carried over is the reversionary AI at the bottom of each page stack regardless of the other mode. For example, if you’re on the DG/HSI page, pressing the HLD/BRT key, which is the page-change softkey, will eventually land you on a stripped-down attitude indicator, ideal for reference as an emergency backup.

The AI and DG/HSI pages are largely unchanged with the newest software and retain their customizable data fields. The new MFD page, where traffic lives, is simpler, with one display orientation, a forward-facing arc with GPS track at the top. Traffic is displayed in cyan elongated triangles in conventional ways. The nose of the triangle is the traffic’s direction, a number indicates relative altitude—“+50” is 5000 feet above, for example—an up or down arrow indicates if the target is climbing or descending and a thin vector line tells you the relative speed of the target; the longer the line, the faster it’s moving. Pretty much standard traffic depiction.

Rotating the knob changes screen range, in eight steps from 1nm to 40nm. Pushing the knob activates the select function, which can be used to get details from traffic depicted on the screen. Turn the knob to move among the visible targets and the details will be shown along the top of the display. Under the MENU button is a filtering scheme where you can choose to limit the traffic shown on the screen. Five choices include Normal (traffic above and below no more than 2700 feet), Above, Below, Only Own (filters only your ownship marker as traffic), and None, which shows all traffic.

In actual use, the AV-30 traffic option works well. It does become solely a traffic display, with no other attitude or navigation information presented, but that’s the right approach to keep screen clutter to a minimum. Since the AV-30 and AV-Link combo is taking traffic data from a Sentry module, what you see there and on your tablet running ForeFlight agree. And while the AV-30’s screen is bright, the resolution isn’t anywhere close to a modern tablet, but the presentation succeeds in giving you the big picture. One feature currently missing from the AV-30’s traffic scheme is an alert function. We’ve become accustomed to our onboard boxes or our tablet apps sending up a warning when traffic gets close; the AV-30 doesn’t yet do that, though it’s not hard to imagine this feature will come eventually.

uAvionix hints that more features will follow Wi-Fi implementation on the AV-30, and assuming similar source material it’s possible weather could arrive, maybe nav data from an external app. In terms of nav, the HSI mode of the AV-30 only displays lateral guidance because the inputs are limited to RS-232 data streams. (Even if you hook up a nav/com with nav output on the RS-232, like from an GNS 255 or SL 30, you’ll only see lateral on the AV-30.) To advance the AV-30 into Garmin G5 feature sets would call for an ARINC 429 adapter plus some other networking protocol to drive, say, autopilot servos. For now, though, adding traffic onto the AV-30 with a sub-$300 dongle (plus a Sentry or similar Wi-Fi-enabled ADS-B data source) is a pretty fair value.

Kitplanes - March 31, 2022
2
KITPLANES editor at large and experienced engine builder Paul Dye walks you through the...