Reducing drag is the best way to improve the performance of an airplane. Increasing power can make an airplane faster, but at the expense of increased fuel consumption, increased empty weight and lower payload or range. Reducing drag can make an airplane faster, but it also reduces fuel consumption at constant speed. This efficiency improvement increases either range or payload at constant weight, or it allows the airplane to fly faster over its original range.

Not all ways of reducing drag involve major changes to the airplane. Drag reduction can be relatively simple and relatively cheap. Most airplanes have unnecessary drag that can be eliminated by some careful modification, many of which are simple and quick to do. 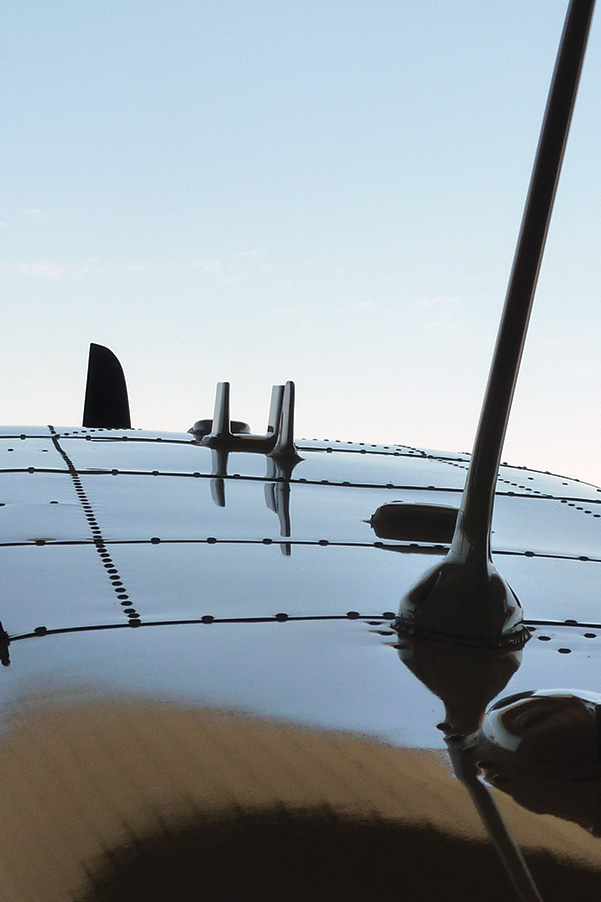 Got an antenna farm on the cabin roof or belly? Each one of those projections exacts its own drag penalty.

The first step in a drag cleanup program is to identify as many sources of unnecessary drag as possible. These need not be big drag producers. Reducing drag is like scraping barnacles off a boat. Even though you may not see the effect of removing one barnacle, if you get rid of enough of them, the effect can be large. A walk around the airplane with an eye toward what features are likely to disturb the airflow will usually find things that can be improved.

Most airplanes have components that stick out into the airstream, each a drag producer. Some airplanes look like flying cacti, with a forest of antennas, exhaust pipes, boarding steps, vent pipes, and similar projections. Exposed hinges and door handles are common. All of these things generate drag, and the cumulative drag penalty can be quite large. Fortunately, this can be reduced with a little effort.

The first thing is to see what can be removed. It’s quite common to see an older airplane with antennas still in place for avionics that are no longer aboard. Removing these useless antennas can reduce drag at no cost. 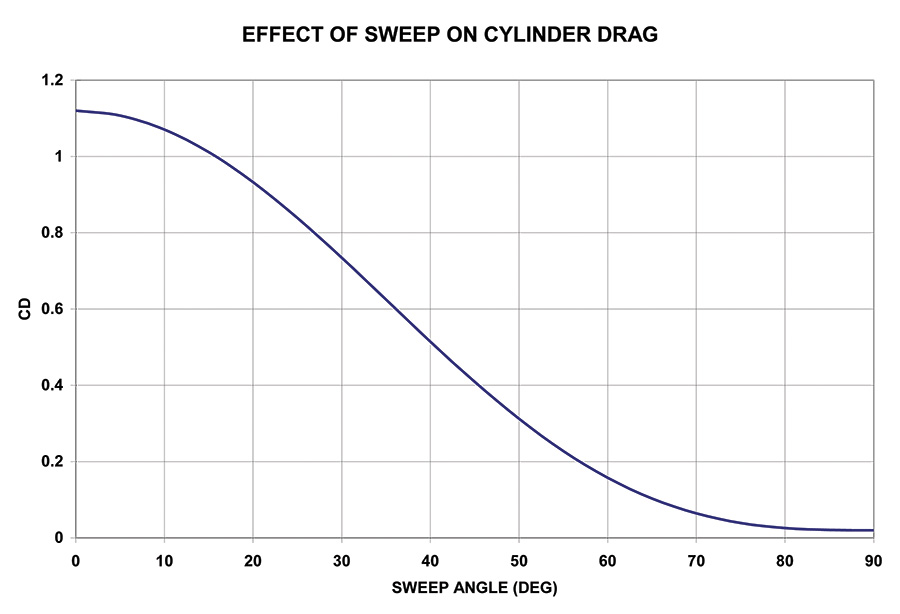 The drag of cylinder shapes can be sharply reduced by sweeping them forward or back. A 45° sweep cuts drag by more than half.

Many airplane components have cylindrical cross sections, such as landing gear legs, exhaust pipes, antennas, boarding steps, vents and drains, some bracing struts and wires and most of the structure of many ultralights.

There are three ways to reduce the drag of cylindrical projections: eliminate them or keep them small, fair them into a streamlined shape or sweep the cylinder forward or back relative to the airflow.

Fairing a cylinder into an airfoil shape can reduce its drag by up to 90%. For fixed components—struts, wires and landing gear legs—we can get this 90% drag reduction by adding simple airfoil-shaped fairings. Even a straight-sided wedge fairing mounted on the back of the cylinder can decrease its drag by 60%.

Wires are harder to fair because they’re flexible. In the early days of aviation, when the drag of cylinders wasn’t fully understood, designers didn’t appreciate that the drag of bracing wires was significant. As aerodynamic knowledge improved, they realized that wire drag on a typical biplane could be higher than that of the wings. Streamlined wire was developed and did much to improve the performance of biplanes.

Even though it has much larger frontal area, the airfoil, top, has the same drag as a much smaller wire, below.

Streamlined bracing wires reduce drag, but are relatively expensive and have to be custom made for each length because they have threaded cylindrical ends to accept fittings. Recently, one vendor has developed a streamlined plastic extrusion that snaps over a cylindrical wire to fair it, a material that’s seen some use in the ultralight world.

Sweeping a cylinder causes its drag to decrease quickly with increasing sweep angle. Exhaust pipes are a good example. They’re relatively large and hot enough to melt or char a composite or plastic fairing. Sweeping an exhaust pipe back 45° can reduce its drag by 65%, while a 60° sweep back can reduce drag by as much as 85%. Exhaust pipes, which are hot, and antennas that can’t be covered without loosing effectiveness, should be swept as much as possible to reduce their drag.

Many production airplanes have fixed boarding steps that consist of a step mounted below the airplane on cylindrical tubing. Often, the step itself is also a cylindrical tube, yielding as much parasite drag as several feet of wing. A boarding step should be either retractable, removable or, at the very least, made of streamlined tubing to reduce drag.

Another common drag culprit on light airplanes is the outside air temperature probe (OAT), which often sticks out perpendicular to the aircraft surface near the top of the windshield. This is a particularly bad place for a protrusion because the air is locally accelerated as it flows over the crest of the windshield. Something as small as the OAT probe might not seem an important drag producer, but on a clean, fast airplane, the probe can cost several knots.

Locks are another area where builders get lazy about drag. Many airplanes I’ve seen have multiple door locks, on cabin doors and baggage doors. The lock barrels project at least ¼-inch above the skin surface, causing drag. 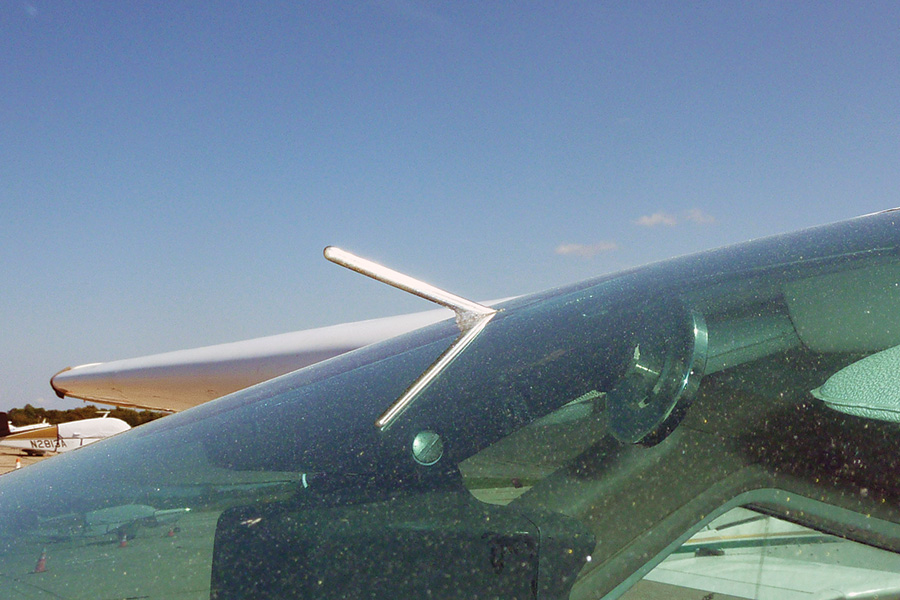 OAT probes near the top of a windshield impose a high drag penalty because the local airflow accelerates near the crest of the windshield.

Some components that project from the airplane surface have relatively smooth shapes. Hinges, lights, fuel filler caps and so on extract a small drag penalty. Similarly, the drag penalty of a smoothly faired bump is small, unless it’s placed where the flow over the bump interferes with the flow over another part of the airplane.

Drag is much larger if it’s placed in a critical area, such as the upper surface of a wing. A bump will cause the boundary layer to become turbulent, creating an expanding wedge of turbulent flow behind it. If the bump is in an area where it might cause the flow to separate, the drag can become quite high.

Some bumps aren’t truly streamlined and have shapes that are bluff, more closely resembling hemispheres or flattened cylinders. The shapes have higher drag penalty than smoothly faired bumps because the flow will separate from the bluff after portion.

This can be particularly bad if the bump is on the upper surface of the wing, where it acts as a small spoiler. A common culprit is fuel filler caps. It’s common for these to project above the wing surface and induce flow separation aft of the gas cap, increasing drag considerably.

If it’s necessary to put filler caps in the upper surfaces of wings, they should be as far aft as possible and should be flush with the wing surface. Such a cap will still trip laminar flow, but at least it won’t cause a large area of flow separation on the vital upper wing surface.

GPS antennas mounted on the top of the airplane near the crest of the windshield are another common culprit. If bumps on the airplane surface are unavoidable, they should be as smooth and as streamlined as possible.

Anything that can be mounted flush should be, rather than in a bump structure. Lights, for example. Tip lights, strobes and rotating beacons are often mounted in cylindrical shapes. Many can be flush mounted instead, particularly those on the wing tips. If components such as locks or fuel caps can’t be flush mounted, then the area around the cap or lock should be built up to form a gradual ramp in front of and behind it. The same approach can be used to fair door hinges. 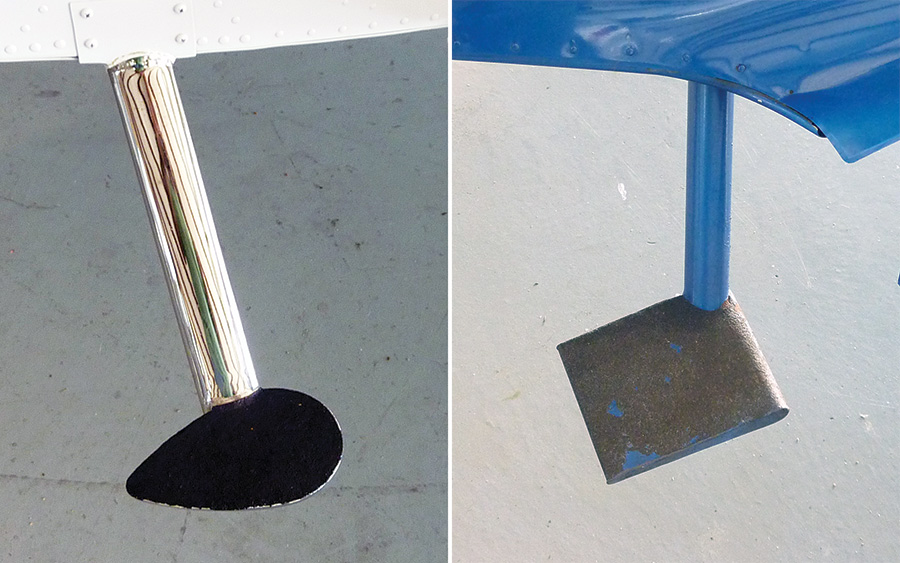 To reduce drag, some designers fair the support stalk for a wing walk step, left. On the other hand, they sometimes don’t bother, leaving a fat cylindrical tube to contribute mightily to the overall drag budget, as on this Mooney step at right.

Drag cleanup seems to provoke a lot of discussion and disagreement among homebuilders. One builder will make a modification and report a speed increase while someone else will try the same thing and report a significantly different result. Often, this spurs an argument about who did it right or who is reporting results accurately. In fact, it’s likely that both modifiers are right because the speed increase they got from their modification is affected not only by the amount of drag the modification itself produced, but by the drag of the airplane as a whole.

The effect of a given amount of drag reduction on the performance of an airplane depends on two things; the total drag of the rest of the airplane and the speed the airplane flies.

Suppose, for example, we retract the landing gear. If the rest of the airplane is high drag, the drag of the gear is a small percentage of the whole. Eliminating gear drag by retracting it may not produce a useful increase in speed. Early airplanes had many drag producers other than fixed landing gear and until these were eliminated, retracting the gear didn’t do much good. A tumbleweed with retractable gear isn’t a lot less draggy than a plain old tumbleweed.

Suppose we had an airplane with 180 hp and a top speed of 100 knots. (Very draggy indeed; maybe an open-cockpit biplane.) If I clean up a typical rotary beacon light by fairing it, the airplane only gains about a tenth of a knot in top speed; hardly worth the effort.

The important thing here is that something that might not be worth the effort on a slow, high-drag airplane can produce worthwhile gains on a cleaner, faster airplane. As performance increases, the gains we get from cleaning up relatively small drag-producing features of the airplane can be quite significant.