A vortex is a flow field characterized by a rapid swirling motion of air. Tornadoes are very large, naturally occurring vortices. The velocity of the swirling air within a strong vortex is quite high. This high-velocity flow, along with the flow’s rotation, can generate large aerodynamic forces.

On airplanes, all lifting wings shed vortices that trail aft from the wingtips. These can have a powerful effect on the airplane that generates them, as well as anything else that is flying nearby.

When a wing generates lift, it deflects the airstream downward. Only the air that flows over the wing is deflected; the air outboard of the wingtips is not. This causes a shearing action in the air near the tips. The air inboard of the tip is pushed down by the passing wing, and ends up moving down relative to the air just outboard of the tip. This shearing action causes the air to swirl because the air pressure on the lower surface of the wing is higher than the pressure on the upper surface. The air flows around the tip between the high pressure on bottom and the low pressure on top, causing the air leaving a wingtip to form a vortex.

The core of each vortex trails aft from the outer edges of the wingtips. Viewed from behind, the flow in the vortex is circular, with air rotating rapidly around the core—upward outboard of the tip and downward inboard. The rotational velocity is highest near the core.

One peculiarity of tip vortices is that for a given gross weight, the slower the airplane flies, the stronger the vortices are. A wing produces lift by deflecting the path of a mass of moving air. To produce an upward force (lift), the wing turns the oncoming flow downward, resulting in downwash. The lift produced is a function of three variables: air density, airspeed and the amount the wing deflects air down (downwash angle). Increasing any of these increases lift, and decreasing any one of them decreases lift.

As an airplane’s airspeed decreases, its wing must deflect the air more to keep its lift equal to its weight. The slower it flies, the more the oncoming air must be turned to generate enough lift for it to remain airborne. This higher downwash angle increases the shearing action between the air behind the wing and the air outboard of the wing, resulting in stronger vortices. 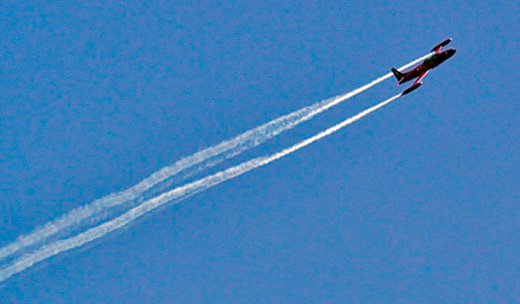 All lifting wings shed vortices aft from the wingtips. These will affect not only the airplane generating them, but also any other aircraft nearby.

Effects on Other Airplanes

Wake turbulence: One of the most significant issues involving wingtip vortices is the wake behind a large airplane. The tip vortex pair shed by a large airliner is powerful and can trail behind it for miles.

Encounters between smaller aircraft and the tip vortices of a “heavy” can cause the pilot of the smaller plane to lose control. In fact, the swirls near the core of a transport airplane’s tip vortices are so strong that they will often roll an airplane that flies into them so rapidly that its ailerons will not be able to prevent it from rolling with the vortices.

Wake turbulence is a particularly nasty hazard because it is invisible. To avoid it, pilots must depend on traffic advisories from the ground and their own observations of the flight path of the heavy. The vortex system trails directly aft of the airplane generating it, so the most dangerous place to be is directly following the flight path of the airplane ahead. This is also where you need to be if you are following another airplane down final.

The second important thing to know about tip vortices is that the vortex system is pushed down by the downwash of the airplane shedding the vortex. For this reason, it is dangerous to approach below, or short, of the approach path of a heavy ahead of you. Your best bet to avoid the wake is to stay well above the flight path of the big airplane, and land farther down the runway than it did.

Formation flying: A wake turbulence encounter usually results when one airplane unintentionally gets too close to the flight path of another. The wake has major effects. The air outboard of the wingtips is driven upward by the swirl of the tip vortex. When two airplanes fly close to each other in line abreast or in echelon (or “V”) formation, the tip vortex systems tend to roll the airplanes away from each other.

When formation flying, pilots can use the upwash outboard of the other airplanes’ wingtips to save fuel. While in echelon formation, the outboard/aft airplane flies in the upwash generated by the lead airplane’s tip vortex. This upwash drives the trail airplane upward. To hold altitude, the pilot must drop the plane’s nose and, in effect, fly downhill, reducing the power required to keep the airplane flying.

This would seem to be a stable situation, because the trail airplane moves back to the center. Unfortunately, it’s easy for the trail pilot to overcorrect and get into a pilot-induced oscillation (PIO). If the airplane starts moving to the left, for example, the pilot will respond by using right stick to roll right and move back toward the center. As the airplane enters the lead plane’s tip vortex, the vortex will also roll it right, resulting in a larger roll than the pilot intended. The plane will likely overshoot to the right, causing the pilot to correct with left stick just as the right tip vortex of the lead plane starts rolling the airplane left. It’s easy to see how this situation can become unstable as the pilot chases the airplane in roll. For this reason, glider pilots are taught to keep their wings parallel with the tow plane’s wings using the stick, but use the rudder to adjust lateral position. By uncoupling the two tasks, the chance of a PIO is greatly decreased. The pilot only commands roll to compensate for any disturbance (including tip vortex) in roll, and uses the rudder to slide the glider left or right as necessary to stay directly behind the tow plane.

Sometimes, the tip vortices of one flying surface on an airplane interfere with other parts of the airplane. This is particularly true of canards and tandem-wing designs in which the forward surface has the same or a lesser span than the trailing surface, and is generating significant lift.

The designer of a tandem-wing airplane must keep in mind how the wake of the front wing interacts with the rear wing, especially the path of the wingtip vortices that are shed from the tips of the front wing. These vortices trail downstream and their trajectory varies with elevator deflection and angle of attack.

For a high-low arrangement, with the rear wing below the front wing, the gap doesn’t need to be as big, because increasing the angle of attack will tend to pull the front wingtip vortices upward, away from the rear wing. The gap in this case only needs to be large enough to ensure that the vortex passes above the rear wing at low angles of attack. This small (vertical) gap may not be optimum for other reasons, but it is adequate to prevent vortex-induced stability and control problems.