Last month, we began discussing the factors that can drive the wing of our airplane to be bigger than it would be if it were purely optimized for maximum cruise performance. We also looked at how wing loading (W/S) and maximum lift coefficient (CLmax) affect takeoff distance. Continuing in the same vein, we will now turn our attention to how stall speed affects the size of the wing. 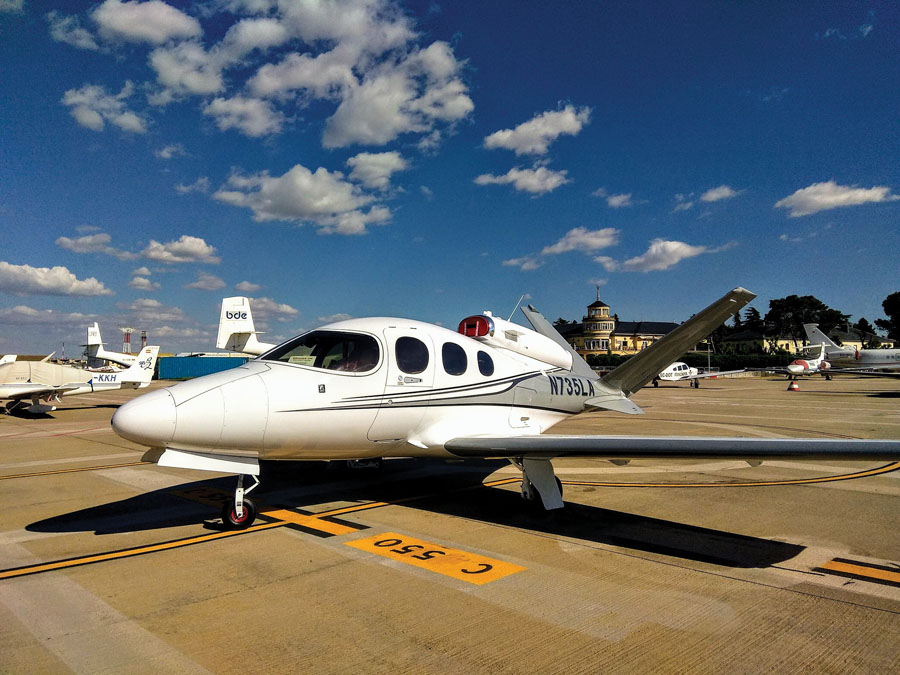 FAR Part 23 now allows single-engine airplanes to have a stall speed above 61 knots if certain occupant-protection requirements are met. This change made it possible to certify the Cirrus Vision Jet, which stalls at 67 knots with flaps. (Photo: Marostegui [CC BY-SA 3.0 (https://creativecommons.org/licenses/by-sa/3.0)], from Wikimedia Commons)

Stall speed (in true airspeed) is a function of wing loading, CLmax and the density of the air.

The equation for the 1 G stall speed of an airplane is:

All of the quantities used in this equation must be in consistent units. In the English system:

Air density (ρ): slugs per cubic foot (a slug is a unit of mass).

The value of the air density varies with altitude and can be found in a standard atmosphere table. At sea level its value is 0.002378 slugs per cubic foot.

Stall Speed (VS): feet per second.

Most of us do not think of airplane speeds in feet per second. We generally prefer knots. If all of the proper conversion constants are incorporated into the equation, the sea level standard day 1 G stall speed of an airplane in knots is given by:

Note that this is the true airspeed for a 1 G stall at sea level standard day atmospheric conditions, but it is also the equivalent airspeed (EAS) at all altitudes. Standard airspeed indicators are calibrated in EAS, so for a given airplane the indicated airspeed at 1 G stall at any given gross weight should be constant regardless of density altitude.

The designer cannot affect the density of the air, so the two variables available to get a desired stall speed are wing loading and CLmax .

The first question the designer must answer is, what is the maximum acceptable stall speed for this airplane?

Government regulations concerning the design and production of airplanes often include “not to exceed” limits on stall speed.

Here are some relevant examples:

FAR Part 23 (Single-engine certified airplane): 61 KCAS (knots calibrated airspeed) in landing configuration. This regulation explicitly allows the use of deployable flaps and other high-lift devices to meet the stall speed requirement. Recently, FAR Part 23 was amended to allow single-engine airplanes to have a higher stall speed provided a set of occupant-protection requirements are met. (see 14 CFR 23.562—Emergency Landing Dynamic Conditions). This change in regulation is what enabled the certification of some single-engine turboprops and light jets.

U.S. Light Sport Aircraft (LSA): 45 KCAS without use of moveable devices. This means that the airplane must be able to meet the 45 KCAS stall speed requirement in cruise configuration. It is permissible to have flaps or other deployable high-lift devices, but no credit for their effect is given for determination of compliance with the stall speed requirement.

FAR Part 103 (U.S. Ultralight): 24 KCAS. The regulation is silent on the use of high-lift devices, but given that the regulation also specifies a 55 KCAS maximum level flight speed, there is little to no benefit in using high-lift devices on a true ultralight. A few have flaps, but it’s not the normally taken approach.

Figure 1 shows stall speed plotted as a function of wing loading for three values of CLmax (1.5, 2.0, and 2.5). A CLmax of 1.5 is typical of what can be achieved with a clean wing with no high-lift devices. A CLmax of 2.0 can be achieved with well-designed simple flaps. To get to a CLmax of 2.5 requires a more complex and powerful high-lift system incorporating slotted or fowler flaps. Getting significantly above this for a typical light-airplane wing requires more sophisticated and complex high-lift systems, and is only worth the effort for special cases such as extreme STOL airplanes.

Looking at Figure 1, we can see the implications of these regulations for the designer. The upper red horizontal line represents the FAR Part 23 stall speed limit. Notice that even with a good high-lift system (CLmax of 2.5), the wing loading is limited to just over 30 pounds per square foot. It’s also interesting to see that at that wing loading, the airplane would have a flaps-up stall speed of almost 80 knots. This wing loading limit is what deterred the manufacture of single-engine jets like the Cirrus Vision jet and single-engine turboprops like the TBM 700 until the implementation of 14 CFR 23.562, which allows higher wing loadings with proper enhancements of cabin safety features. 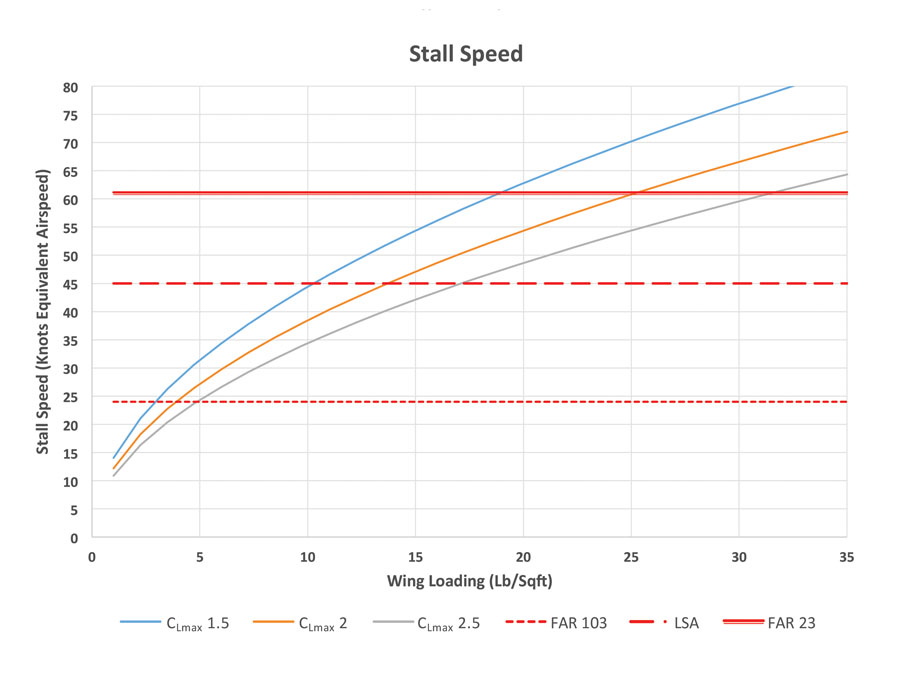 The middle line shows the 45-knot stall speed limitation for Light Sport Aircraft. Here the designer is much more limited because the higher CLmax values (2.0 and 2.5) represented by the lower two stall-speed curves are not available for compliance with the regulations; the 45-knot stall speed requirement must be met without moveable aerodynamic devices. In practical terms this means that LSA designs are limited to wing loadings of about 10 pounds per square foot. This particular limitation is interesting to bear in mind when looking at airplanes (particularly kits) marketed as Light Sport legal. If the wing loading is much above 10 pounds per square foot, it’s unlikely the airplane can really meet the regulatory stall speed requirement.

The bottom red line represents the 24-knot stall speed requirement of FAR Part 103 for ultralights. Looking at this limit, it’s immediately clear why true ultralights combine very large wings with highly cambered airfoils. Because ultralights are also limited to a 55-knot maximum speed by the regulation, the airfoil used can be designed primarily for maximum lift, with little or no consideration for “cruise” drag. This allows the bare-wing CLmax to be higher than that for an airplane that actually has to cruise at a reasonable drag level. Accordingly, the limit for an ultralight probably falls somewhere between the upper two stall-speed curves in the figure. Even so, we can see that the upper limit on wing loading for a truly legal Part 103 ultralight is only about 4 pounds per square foot. This is why a single-seat ultralight, with a maximum gross weight of less than 600 pounds, will have a wing as large or larger than a typical two-place trainer or LSA.

Next month we will continue our discussion of wing sizing with a look at landing distance and safety.