Every now and again I’ll get a question that “everybody knows the answer to” and yet nobody actually seems to. In this particular case, a homebuilder said he wanted to put antennas on his airplane for every possible frequency that was permitted for aviation. How would he go about doing that? 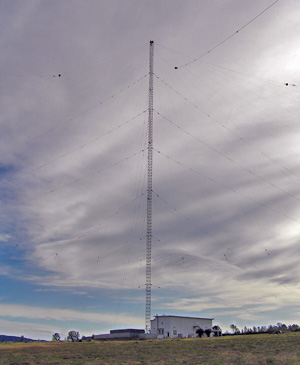 The 700-foot tall loran tower from the Middletown loran station near Clear Lake in Northern California. Even at this height the antenna is nowhere near a quarter wave, so it must be electrically tricked into thinking it is this long with loading coils at the base of the antenna.

Wow. Every one, huh? My answer was that it wasn’t really possible unless he was homebuilding something on the order of a C-130. He didn’t understand until I had him download 47CFR87 (Title 47 of the Code of Federal Regulations, Part 87), in which the FCC (not the FAA) outlines exactly what frequencies are allocated to the aviation services. Let’s take a look at the entire aviation spectrum proceeding from low to high frequencies (long wavelengths to short wavelengths). Regarding wavelengths, we want to make antennas a quarter wavelength long, so after each frequency I’m going to give you the wavelength of a quarter wave in inches. For example, the VHF com band is centered at 127 megahertz (MHz), so I’ll give you this answer: 127 MHz (23.25 inches). If you want to do your own calculation, one quarter wave in inches equals 2953 divided by frequency (in MHz). Also, don’t forget that there are 1000 kilo-hertz (kHz) in 1 MHz and 1000 MHz in one gigahertz (GHz).

3) 3 to 30 MHz (3937 inches to 394 inches): At this point things start to get goosey. This so-called “HF” band is where all aircraft communications once took place, though by 1950 most aircraft vacated the HF band for the more compact and reliable VHF band. However, because radio waves below 30 MHz can generally be used for ultra-long distance communications (because radio signals below 30 MHz can be bounced multiple times off ionospheric layers at very high altitudes above the surface), most transoceanic aircraft use these frequencies for communicating with land stations. 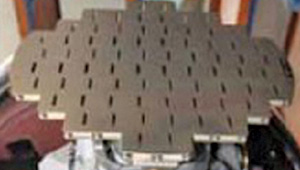 Each of the little slots in this X-band weather radar antenna is actually a half-wave antenna and is approximately 0.6 inches long. The little half wave slot antennas combine to focus a pinpoint beam of energy from the face of the antenna. The antenna is on a swivel that allows the beam to be swept across the nose of the aircraft from left to right and positioned up or down depending on what part of the sky the pilot wants to view.

10) 123.125 to 123.575, including the infamous 123.4 and 123.45 are flight test stations only, with a specific license required for both aircraft and ground stations on these frequencies, no matter what your good buddy in the next hangar told you. Also from this band, 123.3 and 123.5 may be issued to flight schools, individual flight instructors, gliders and free balloons in flight instruction use.

11) 136 to 137 were supposed to have been reserved to relieve the “unicom squeal” at smaller airports, but only five channels out of 40 were ultimately reserved. These five channels also can be used for automated weather (AWOS).

14) 328.6 to 335.4 MHz (8.9 inches): glideslope channels paired with localizer frequencies. There is neither rhyme nor reason (nor mathematical relationship) between a localizer frequency and its glideslope pairing. In today’s electronic chip memory that isn’t a real problem, but back in the days when we had to use tubes it was a royal pain in the labonza.

18) 8000 to 12,500 MHz (very short): Most civilian airborne weather radar operates in this “X” band frequency range on several assigned discrete frequencies. There are still a few of the older “C” band weather radars in existence that work around 5 GHz (5000 MHz).

And the poor guy wanted antennas on his airplane for all these frequencies. Isn’t going to happen, is it? In upcoming columns I’ve promised more computer sites for aviation—in particular how to navigate the FAA site. I’ll also have a few more computer tricks, and then we’ll get back into bits-and-pieces avionics. Until then, stay tuned.