Let’s face it. Sometimes our steel tools get left out where water can get to them and then we forget that they are there. For a day, for a week, for a year, the rusting process takes place.

We can reverse that rusting process—chemically as well as mechanically. Mechanically is pretty easy, but when it is really rusty, or when we want to have some sort of abrasive process to not only clean the tools, but to break the sharp edges from a fabricated part, we can have some sort of mechanical “sander” that does the job for us.

First let’s talk about chemically removing rust. Rust is steel’s way of keeping our environment from destroying the steel part. A coating of rust on steel protects the steel from further oxidation and further deterioration.

Unfortunately for us, rust looks awful on our tools. There is a solvent for rust, and strangely enough, it is automatic transmission fluid (ATF). Mixing ATF 1:1 with acetone makes a pretty good rust removal solution. Mixing it with a little Marvel Mystery Oil lubricates the tool and keeps the rusties away for a while. Try equal quantities of each for a really good solution to removing rust. 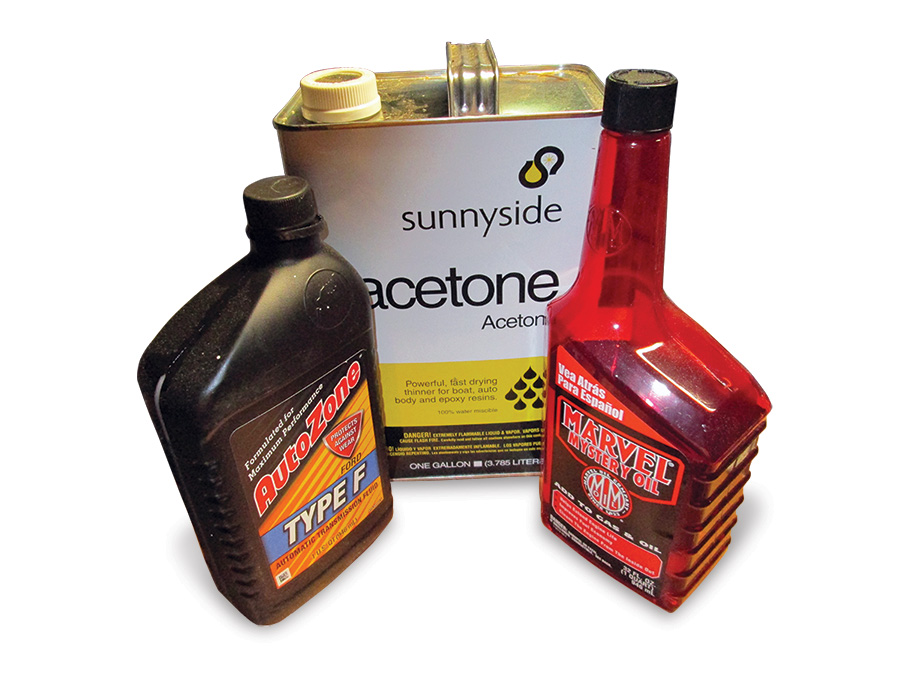 If that were the magic elixir that just dissolved the rust, this would be a really short column. While this solution is really quite good at loosening the rust, it doesn’t dissolve it. There is a bit of elbow grease involved in the process.

The quick and dirty way is with an industrial strength paint stripping pad similar to a dish cleaning “Tuffy” style pad. Soak the offending tool in the ATF solution for a day, then scrub the softened rust off with the paint pad. Sometimes for heavy rust it may take a couple of dips into the ATF solution, but eventually all the rust will come off.

The nifty way to do it is with a motorized sanding box. This is nothing more than a platform connected to a motor that has an off-center weight. Think of it as one of those massage chairs with a plywood platform attached. A plastic box with sand inside is strapped to the platform, the rusted and soaked tool is placed into the sand, and the vibrating motor is turned on. An hour or two later, the tool emerges clean as a whistle. As above, if the rust is particularly well baked on, another session or two in the ATF solution and then another shaking will eventually clean the tool, possibly with a little handwork with the Tuffy pad in the crafty corners.

Anybody can go out and spend a fortune to make a sanding box with a vibration platform. You and I are going to do it for $35 or thereabouts.

First, the motor. Almost all towns have some sort of charitable thrift store where household surplus items are donated and then sold. Way back in the dark dusty corner is an old sewing machine that has a broken part and is considered trash. Buy it and strip the motor out of it. Ours came from a 1927 White Sewing Machine Corporation and is rated at 1/12 horsepower (65 watts / 746 watts/hp). Note in the photo that this motor was designed for 75 cycle AC power (not 60 cycle). My research shows that this frequency was never used, so why they designed the motor for this frequency is a total mystery. 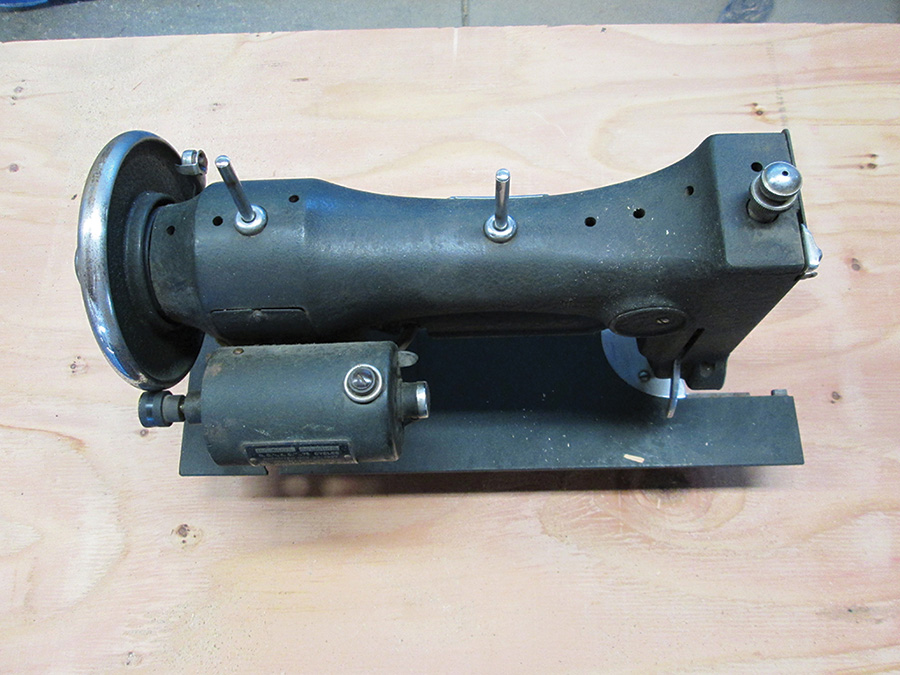 The motor for the vibration platform came from a 1927 sewing machine.

The frame should be massive, so as not to shake along with the platform. Long and involved calculations showed that Douglas fir 2 x 12 lumber to make a box 12 inches x 12 inches would be perfect. And quite by serendipity that was exactly the lumber left over from a recent home remodel project. 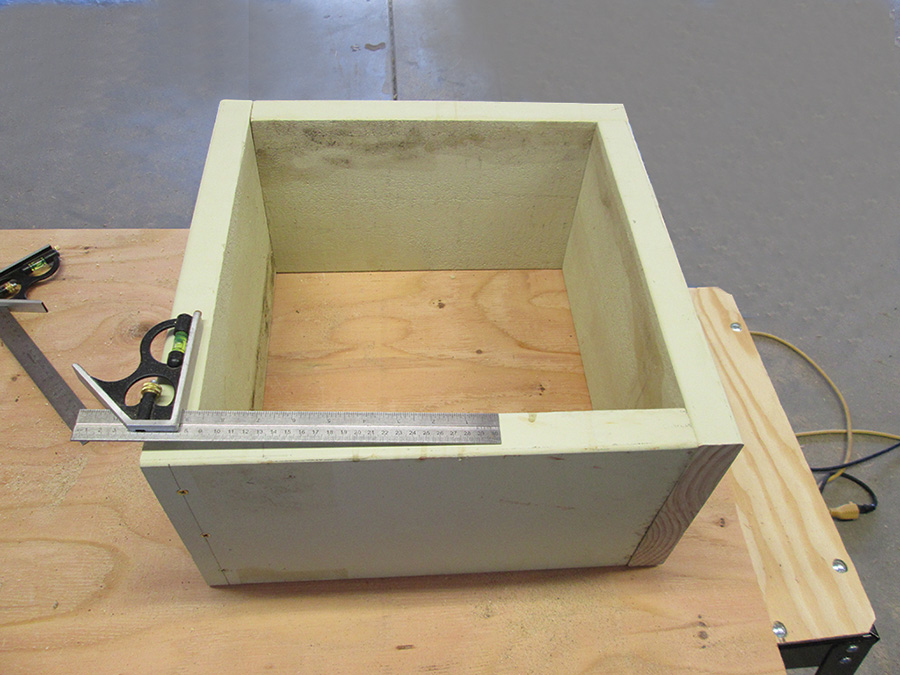 The frame should be massive, so as not to shake along with the vibrating platform.

A similar profound calculation was done to size the platform and spring mounting board that mounts to the top surface of the frame. Again, by miraculous coincidence, a scrap of ¾-inch floor plywood from the remodel scrap pile fit this bill exactly.

And the springs that let the platform “float”? Mechanical engineering equations to determine the exact k-factor of the springs showed that the small valve springs left over from a recent O-470 overhaul on the company 182 were just the right size. 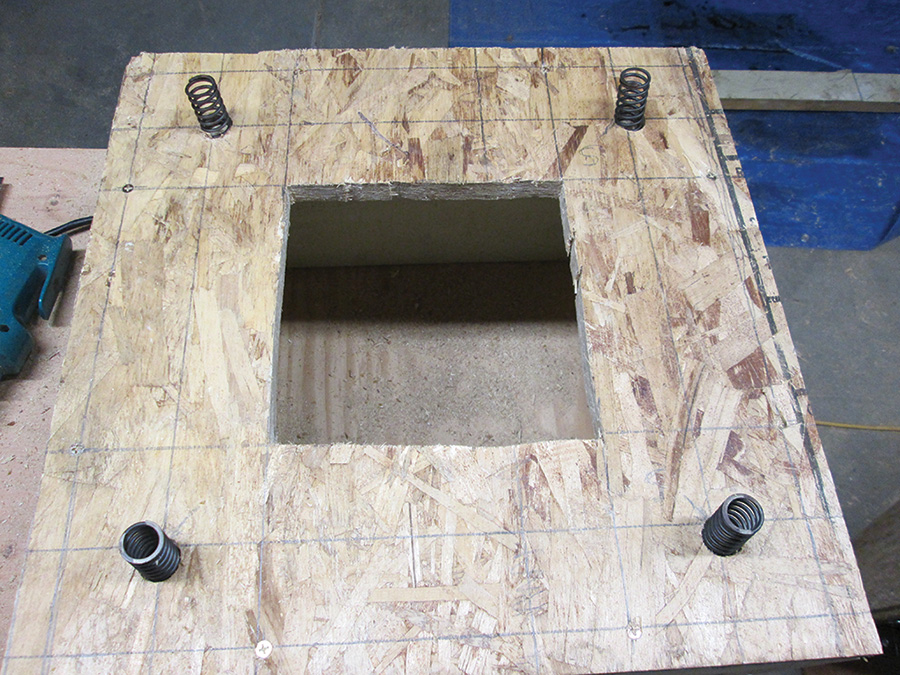 The springs that allow the vibration platform to float were left over from a recent O-470 overhaul.

The platform itself should be relatively thin, but not so thin as to crack with the vibration. Blind, dumb luck produced a small piece of ¼-inch plywood from the scrap heap.

On the vibrating platform itself, we countersink very shallow holes to mate with the valve springs, put a bolt through the platform, springs, and mounting board, then add a washer and nut tightened down just far enough to keep the valve springs in their holes, but not tight enough to compress the springs at all.

Then we mount the motor. Two steel L-brackets from the hardware store and 1/4-20 mounting hardware fasten the motor directly to the center of the vibrating platform. A worm clamp, a very small L-bracket, and a small bolt and nut will serve as our “shaker” unbalanced motor mechanism. Add eye bolts in each corner of the mounting platform for the bungees that hold down the sand box and we are home free. 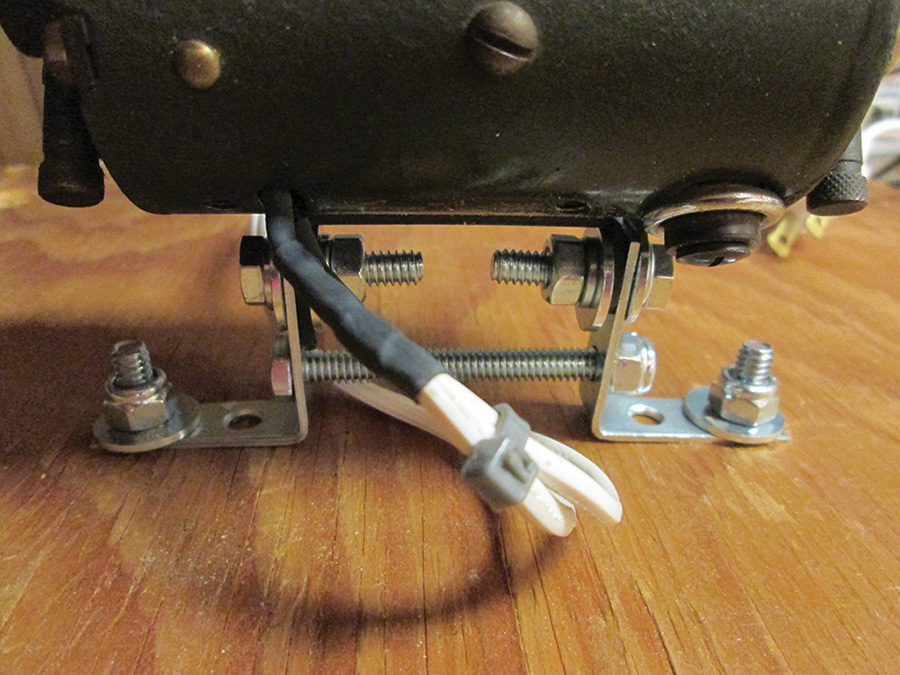 The motor is mounted with L-brackets directly to the center of the vibrating platform. 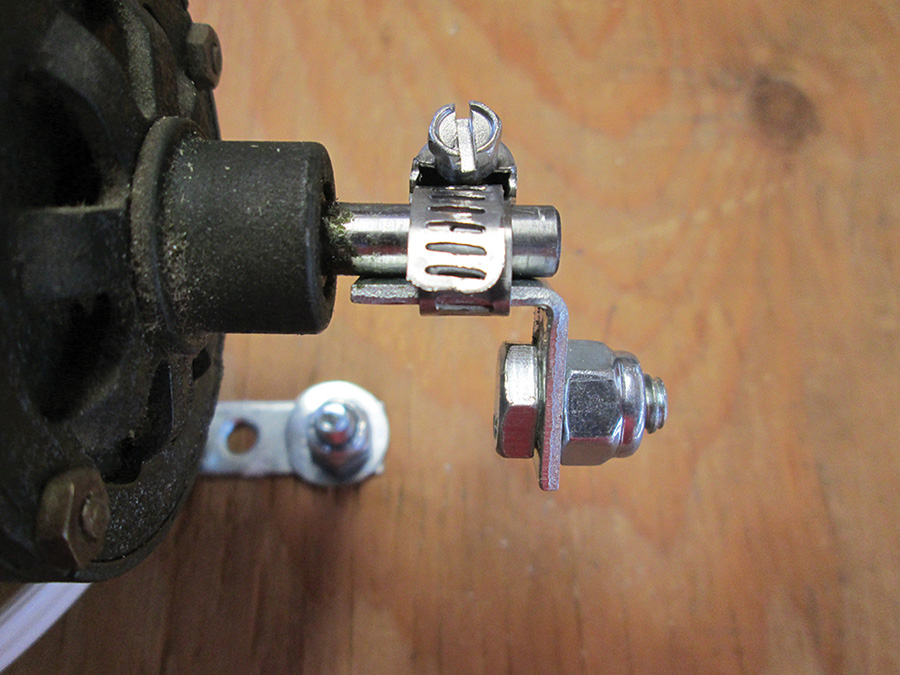 A worm clamp, small L-bracket, and a small bolt and nut serve as the “shaker” unbalanced motor mechanism.

Except for the electricals. Somehow we need to vary the speed of the motor to provide an adjustable shaking pattern. A plain old incandescent lamp dimmer (hurry and get one before all the incandescent parts become obsolete) inside of a leftover electrical box and a surplus outlet will do just fine on a motor this small.

And how does it work? Quite well, thank you. With the tool totally immersed in the sand, an hour of shaking, plus ten minutes of handwork on the really bad areas, produced the tool as shown in the photo. 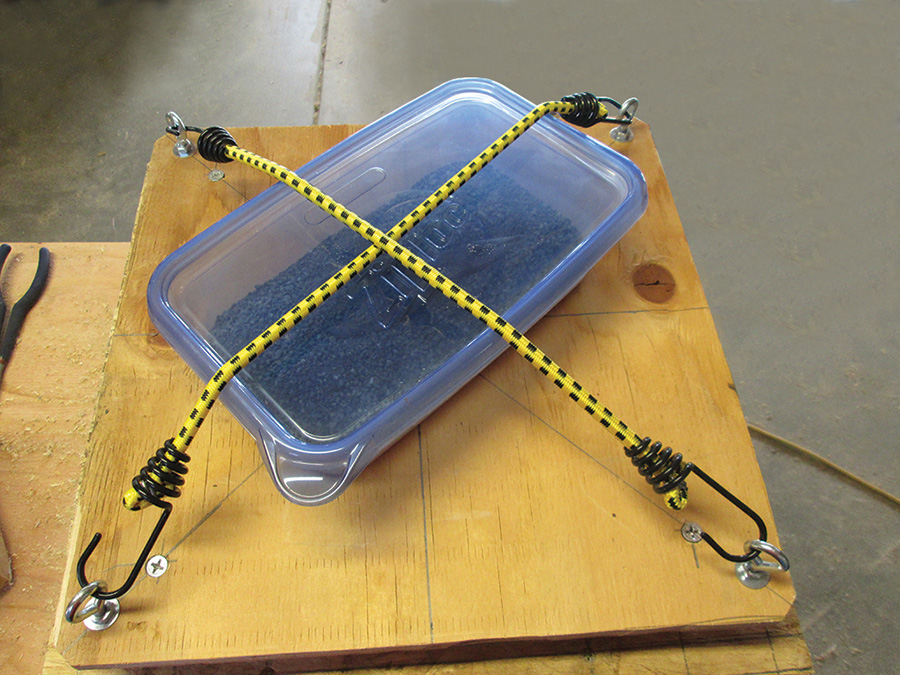 The sand box is attached to the vibrating platform with bungee cords.

So what good is this platform if we don’t have dirty tools? Ever brought your radio to the fix-it shop, only to be told that it “checked out good on the bench”? Most of us who are in the making radios business, as opposed to the fixing radios business, have some sort of environmental stress areas where we put avionics that won’t fail under laboratory conditions, but have failed in service. A shaker box is an integral part of that stress, although I caution you two things: One, the vibration is very much less than this setup. While the parts are identical, we use just the worm clamp on the motor. That much unbalance is enough shake for a radio. Two, do not ever subject a moving pointer meter to a vibration test unless you want an expensive door stop. And thermal testing? Light bulb or dry ice inside a picnic cooler works quite well for temperature. Just think, your very own environmental setup for under a hundred bucks. Oh, you want altitude too? Drill a hole and fit a vacuum cleaner nozzle tightly with sealant onto the picnic cooler and strap the lid on tightly with bungees. Suck it down with a vacuum cleaner and it works just fine up to several thousand feet. 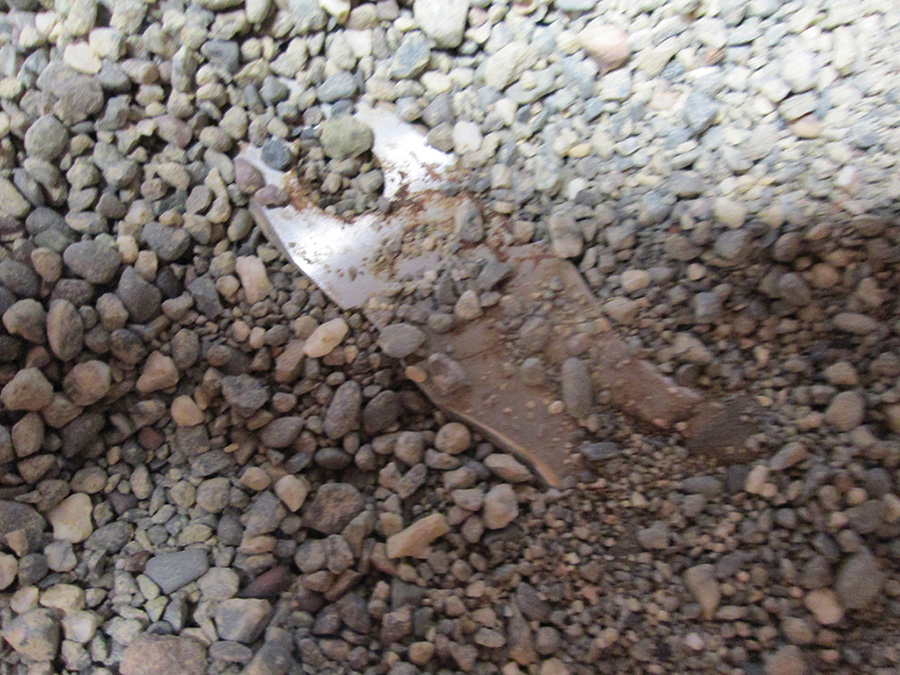 The tool is totally immersed in the vibrating sand for about an hour. 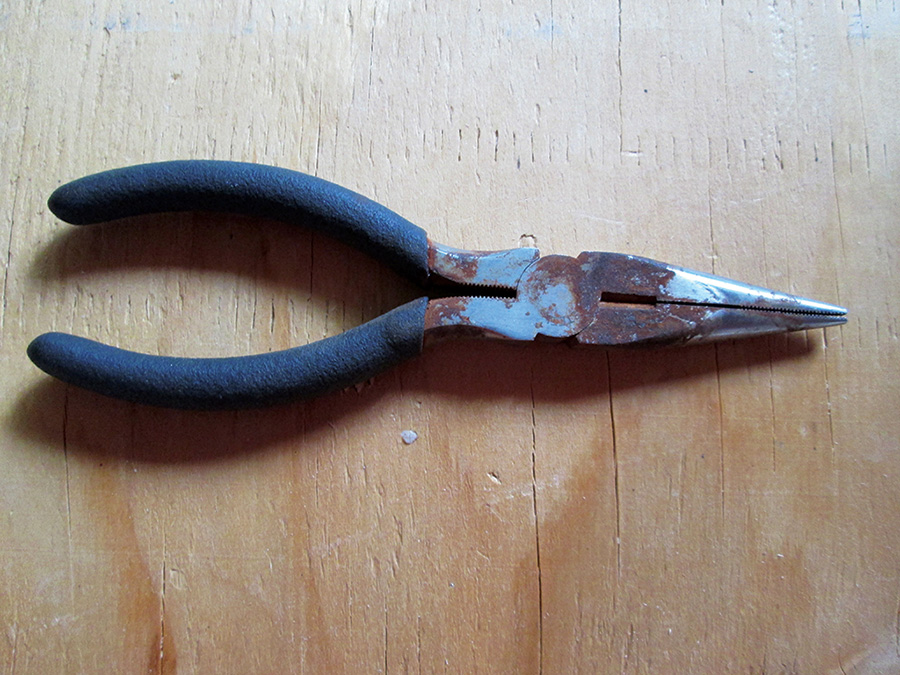 An hour in the shaking sand, plus 10 minutes of handwork, removed the rust from the tool. 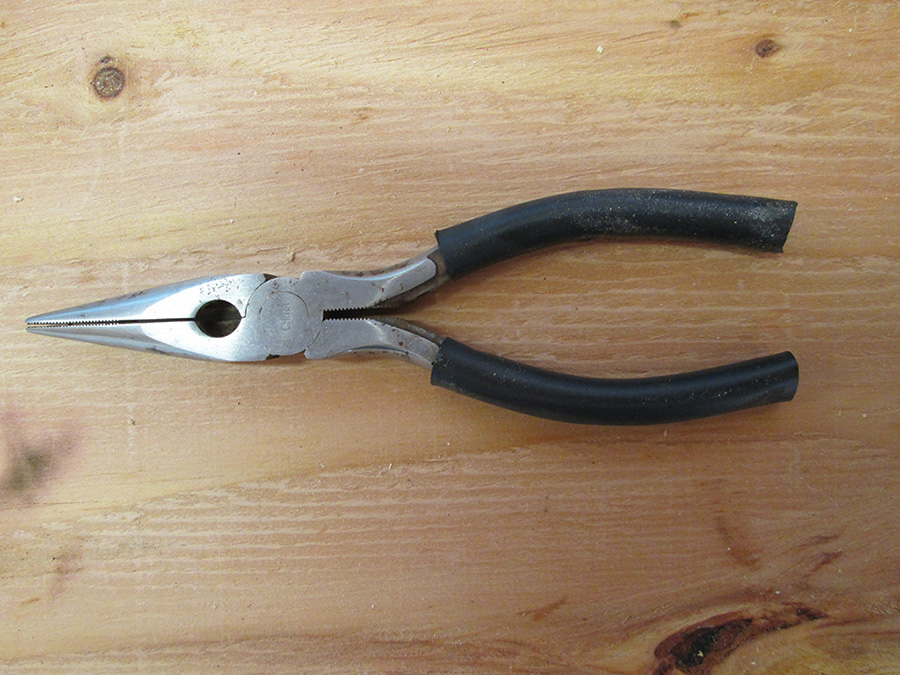 So where from here? In July 2005 I showed you how to make a wind-T for the backyard out of wood. The wood lasted about five years in the snow and the rain, so in May 2010, we made the “Vari-EZ” version out of PVC water pipe. The problem with that one, now another five years later, is that the plastic fittings have thermally glued themselves together after five years of baking in very hot summers, and I can’t get into the fuselage to replace the now dead batteries.

Now comes the “Van’s RV” version of the wind-T out of aluminum, with real fasteners that can be taken apart for maintenance. In addition, for those of you brave enough to have downloaded the printed circuit program from my web site, you can make your own PC board battery charger for this version. Stay tuned…