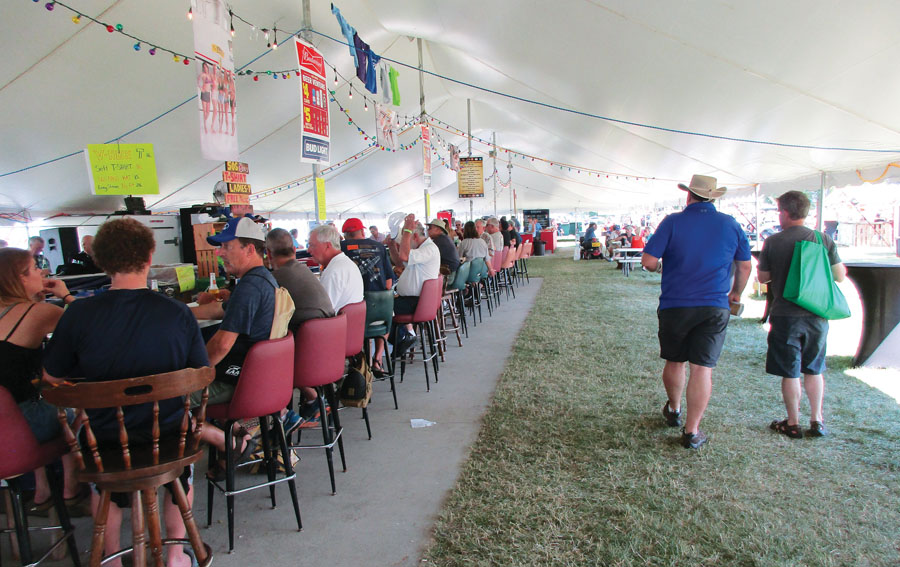 Let’s be straight about Oshkosh right off the crack of the bat. At my first “Oshkosh,” way back in the year of our Lord 1973, we all called this aviation extravaganza after the city in which it was held. Then in early 1998 the term “AirVenture” was coined by the folks on mahogany row at 3000 Poberezny Road (EAA headquarters), mostly to trademark the name for their merchandise. Mostly the only folks who call it AirVenture after 20 years are in the headquarters building. All of us who come from outside of Wisconsin call it “Oshkosh,” but if you live in or near Oshkosh, you simply call it “da EAA.” To do it local justice, you’ve got to hold your nose shut and sound like a duck under water when you pronounce “dah EEEEEE AAA AAA.”

In “The Other Oshkosh,” which appeared in the August 2016 issue of KITPLANES, I took you on a grand tour of a “city” that increases the population of Oshkosh by about half again. It’s called Camp Scholler for the 32,000 people car-camping at the Oshkosh show the last week of July. For December 2018, I thought you might like to see some of the stuff other than airplanes that are reasons why 50,000 of us make the long trek to “Baghdad on Lake Winnebago” every year.

You get the idea right from the names of the professional baseball and football teams of Wisconsin (the Milwaukee [beer] Brewers and the Green Bay [meat] Packers) that beer and bratwurst are consumed in this part of the world. You would be right. In gargantuan quantities. 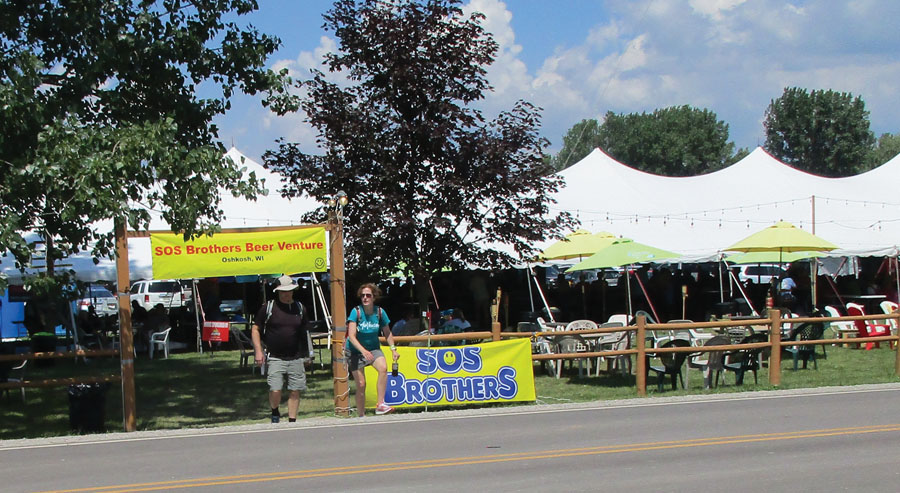 It stands to reason that a tent approximately the size of a football field and run by the four Sosnoski brothers (Al, Carl, Dean, and Steve) would be called the SOS Brothers Beer Tent. It would also stand to reason that the young female “beeristas” working so hard delivering 37 different types of adult beverages and a full menu of lunch and dinner fare to the (mostly elderly male) patrons shouldn’t be forced to work in the heat of a Wisconsin summer fully clothed…bikinis are the order of the day. Seems that the SOS Beer Tent goes through about 100 cases of beer every day of the Oshkosh show. That’s about 225 gallons of beer a day, or enough beer to fully fuel 5 RV-8s. Besides the beer brothers and the eight beeristas, about 30 people (chefs, security, etc.) make up the workforce of this landmark on the west edge of Wittman Field. Find it with the huge yellow balloon flown rain or shine over the tent. 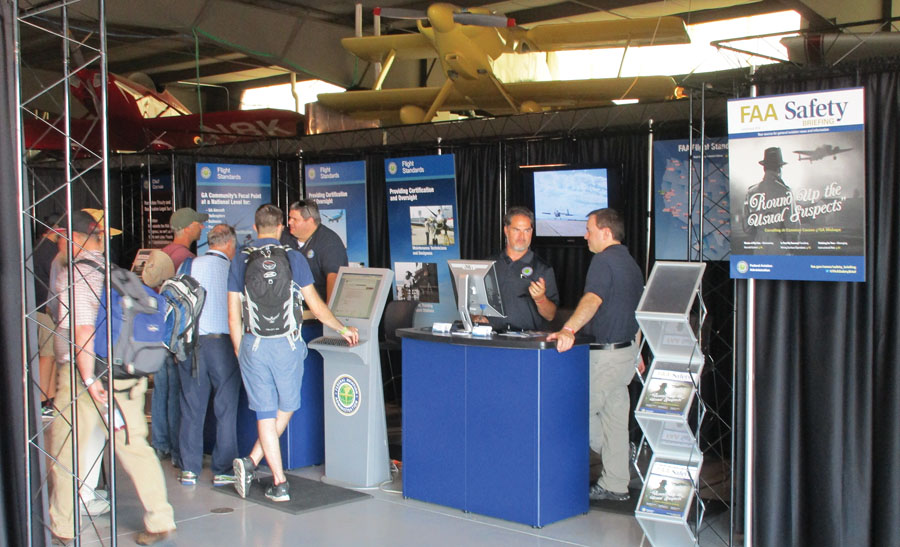 FAA operations/maintenance inspectors. These guys have a real and practical approach to general aviation matters.

Down at the north end of Waukau Avenue, just to the south of the control tower, you’ll find the FAA building, officially called the FAA Aviation Safety Center. Most of us think of an FAA inspector as either a grizzled old fellow with granny glasses looking over our shoulder to catch us doing something wrong or a wet-behind-the-ears young twerp who couldn’t find his fanny with both hands in a phone booth and a GPS. Actually, the folks I talked to (and I made it my business to spend a fair amount of time chatting with these folks) were quite competent regarding general aviation. More than one of them said things like, “When I flew the 182 to Sun ‘n Fun this year…,” and “The Citabria just coughed once at the top of the Immelmann…” 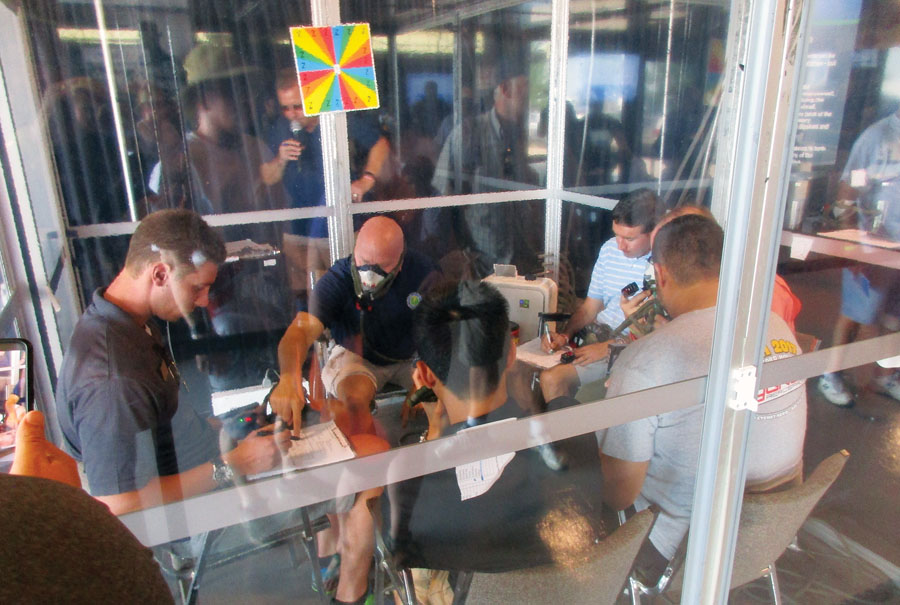 The FAA exhibit wouldn’t be complete without a high-altitude chamber.

Where else in the space of a large hangar can you talk to a maintenance inspector with grease under his fingernails, a couple of lawyers who were straight from the FAA Office of the Chief Counsel in D.C., and a few real MDs from the Office of Aerospace Medicine that can talk about the requirements for manned space flight and then switch to a detailed discussion of BasicMed without taking a breath? The FAA sends fully qualified people from all 21 of its divisions and departments, most of them from either Oklahoma City or D.C. This is the real deal, folks. The FAA does not send pencil pushers to this show. These folks are real-world absolute experts in their fields and are more than willing to share what they know with anybody that cares to learn.

What is not generally known is that the National Transportation Safety Board (NTSB) is also housed in the FAA Center. The NTSB puts on 25 different forums and discussions on everything from dissect-ing a particular accident in exquisite detail to drones in the airspace. I personally found them fascinating in their exhaustive detail of accident investigation.

The NASA building at Oshkosh.

Moseying on down Knapp Street and directly across Knapp from the forums buildings are two relative newcomers to the EAA show: the NASA building and the Innovation Showcase building.

I am happy to report that NASA is totally spun up on the manned Mars project(s). One item I found absolutely fascinating was something I did some calculations on when I was working on the Viking Mars Lander program back in the late 1960s. We didn’t know anything about the Martian atmosphere, other than it was mostly carbon dioxide, but we made some educated guesses about density, gravity, and all that other stuff we really needed to calculate how radio waves would act near the surface of Mars. Turns out we made some pretty good (and some pretty bad) guesses, but I did some theory that I was studying for my flight instructor rating and applied it to Mars. 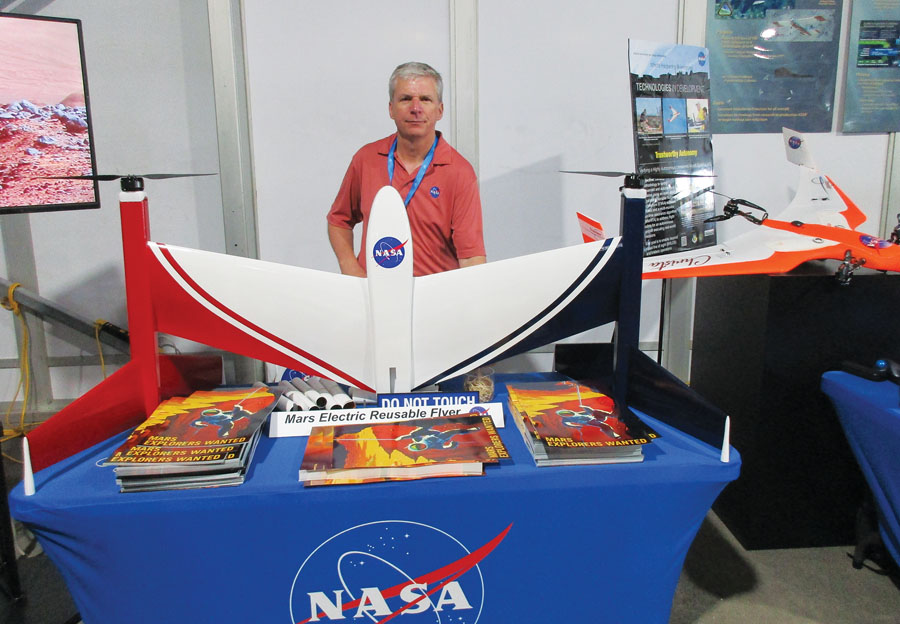 NASA models of how we are going to fly on Mars.

Turns out that NASA has refined a lot of the data we “guessed” and found that the Martian “air” will sustain flight! That’s what I found with my calculations, but lead-acid batteries turning motors with a 25% efficiency would have required a 1969 airplane the size of an aircraft carrier to haul it the most trivial of distances. We had no idea that neodymium super magnets for a motor and lithium batteries would shrink that carrier down in 2018 to something more like a Cessna 210 or so. It is really nifty to walk around that building and see how far we’ve come in space exploration in 50 years. Just think, we are going to have a homebuilt aircraft on Mars in 2030 or so.

Now, Oshkosh 2019 starts on July 22, exactly 50 years and two days after brothers Armstrong and Aldrin touched Apollo 11 down on the surface of the moon. That calls for a celebration! 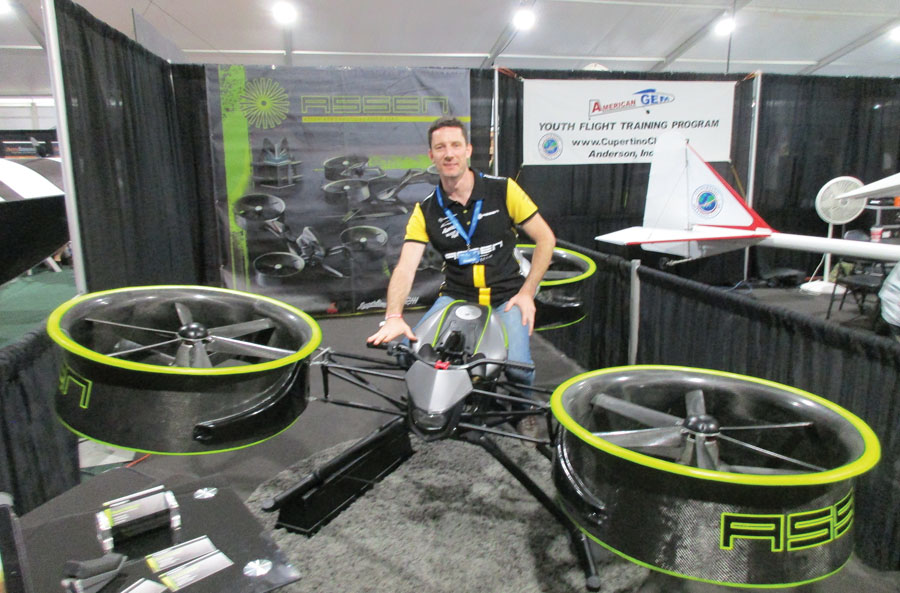 The helicycle machine with the inventor sitting in the driver’s seat.

Moving over next door to the Innovation Showcase building, we come to the bleeding edge of homebuilt technology. You will see stuff in this building all the way from a “heliocycle” using high-lift electric motors to power a motorcycle-sized vehicle using drone motors on steroids, to drones that drop packages on precise command from hundreds of miles away. You are really seeing stuff in this building that will be in our garages and workshops in five to 10 years. I can’t wait for that heliocycle sucker to show up at the Sturgis motorcycle rally one of these days.

That’s about it for the second installment of the “Other Oshkosh” series, and I tell you—I haven’t begun to scratch the surface of this event. Look forward to Part III about this time next year. Until then…Stay tuned…