I thought I had heard it all about airplane electronicky stuff. This tops anything I’ve heard in a long time. Fellow I know bought an LED instrument panel floodlight to try and save a few amps of incandescent lamp current from his electrical bus. The recommendation from the manufacturer is to install a low-value high-wattage resistor in parallel with the LED light so that the total current remains about the same as the incandescent lights, and then his dimmer will work normally. To top it off, they recom-mended only their expensive pulse width modulation dimmer for the installation. Lordy. Throw away the reason for buying a low-current LED in the first place and then compound the stupidity with a dimmer doing exactly what the LED is not supposed to do. Read on.

So, here we go with a bit of speaking truth to (electrical) power. First, LEDs are marvelous little light bulbs. Comparing a #330 12-volt incandescent instrument light that draws 80 milliamperes (mA), I find that a single white LED run at about 15 mA is about the same brightness, but I can run four of them in series at 12 volts. My math says that the LED is roughly 20 times more efficient than the incandescent.

Another trick your brain plays on your eyes is what is called “persistence of vision.” That is, if you look at this magazine page for a moment and then immediately shut your eyes, you will see (just for an instant) the page in your mind.

Finally, the eye is what we call a “peak detector”—it takes the maximum light produced by a bulb. No matter if the bulb is full on for a few milliseconds and off for a few dozen milliseconds, your eye thinks that the bulb is in the full-on mode all the time, subject to the 24-frames-per-second limitation stated above. An incandescent bulb has a very long time thermal and optical constant measured in seconds. If you turn an incandescent 12-volt bulb on for a few milliseconds and then off for the same number of milliseconds, an incandescent bulb “thinks” it only has an average of six volts across it and dims accordingly. An LED, on the other hand, turns on in microseconds (millionths of a second), so if we put the same on-off pulses on it, it turns on full bright for a time, then full off for a time. Your peak-detecting eye thinks it was on full-bright all of the time.

Now that we know all this stuff, let’s go back to our original discussion about changing an incandescent lighting system to an LED system.

In the first place, since we will be drawing way less current, we might want to save a few ounces (or pounds) and replace the original wire that needed to carry amperes of incandescent current to one that only needs to carry milliamperes of LED current. Don’t forget that the fuse or breaker was sized not for the load, but to protect the wire from burning and/or melting with an accidental short circuit. You may want to review the requirements for fuse versus wire size if you do a rewire job. 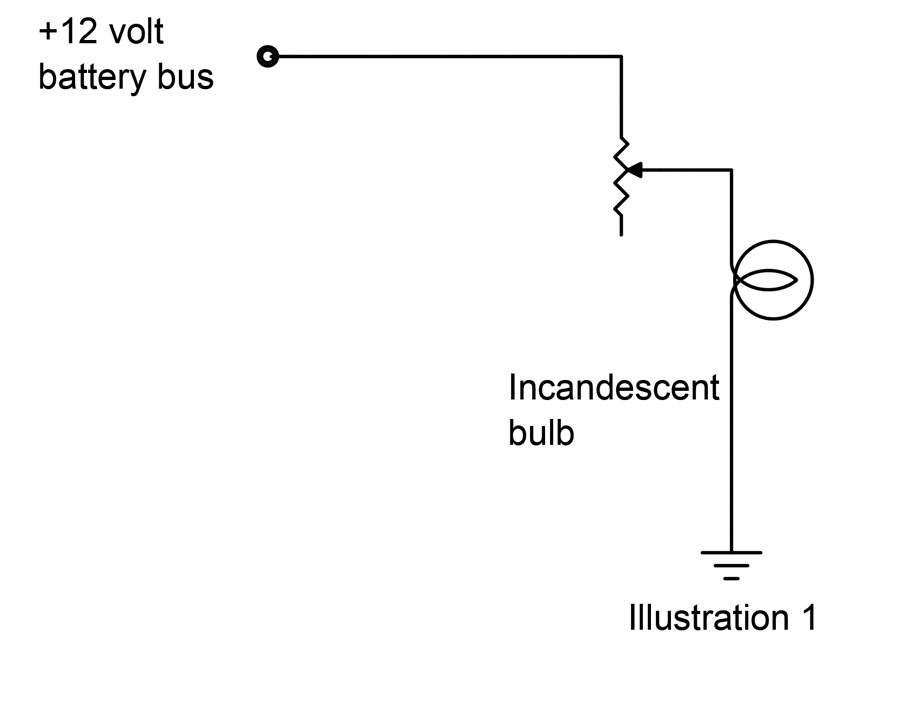 Illustration 1: State of the art in 1920. Wirewound rheostat and incandescent bulbs for panel illumination. 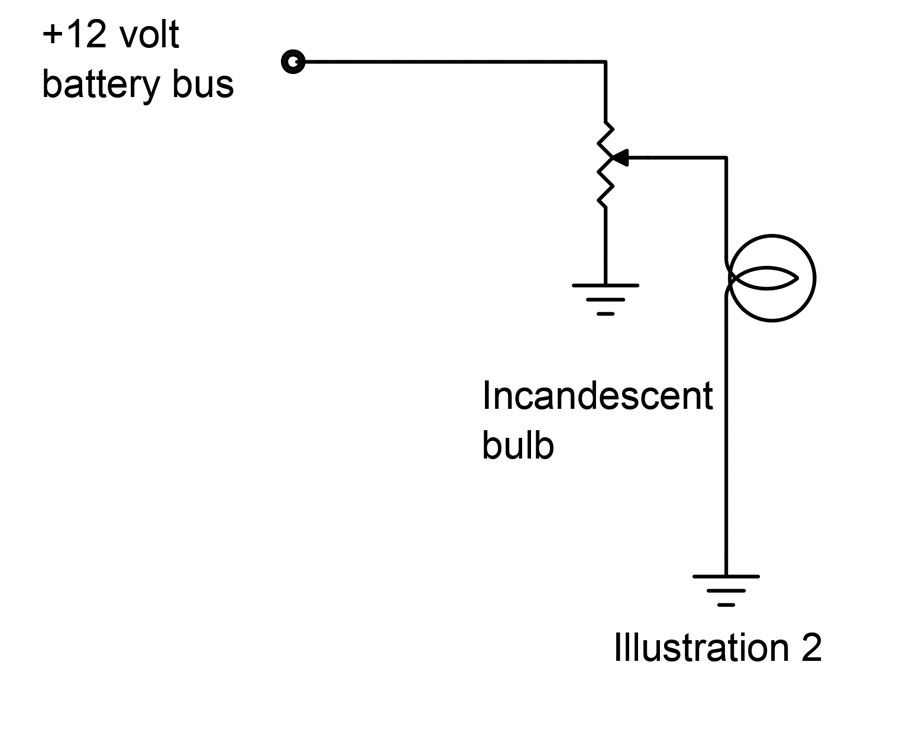 Illustration 2: Improved state of the art in the 1940s. Wirewound potentiometer and incandescent bulbs. 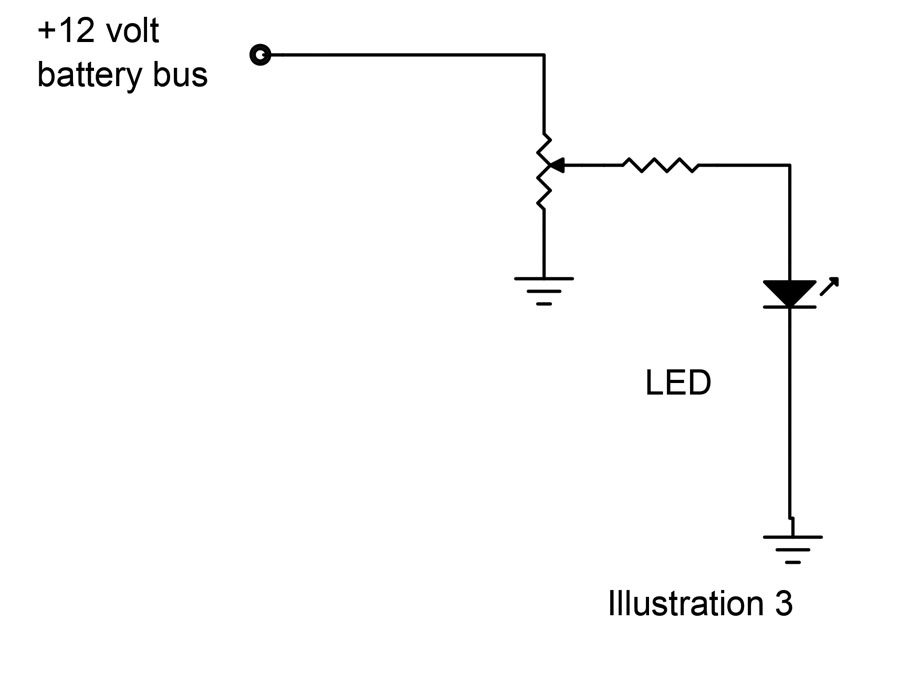 If we are working with an old airplane (say, one that was built before 1970 or so), then the “dimmer” was generally a rheostat or variable wirewound 2-terminal resistor. These old clunkers required that the lamps draw a fair amount of current for them to work. If indeed we try to dim an LED with a rheostat type of dimmer, the LED will not dim much at all.

There was another method of dimming that wasn’t quite as popular as the rheostat and that was a potentiometer type of 3-terminal dimmer. How can you tell the difference without tracing out the circuit? Simple. Take the lamp load off of the circuit and measure the voltage at the lamp terminal with a regular old Harbor Freight digital voltmeter. If rotating the dimmer knob from full on to full off leaves the lamp voltage constant at the battery supply voltage, it is a rheostat. If the voltage at the lamp changes from zero to battery supply voltage as you rotate the knob, it is a potentiometer and can be used with LEDs.

There is a gotcha with either a wirewound rheostat or a wirewound potentiometer (“pot”). If either of them were designed to be used with an incandescent lamp load they are way overrated for the LED job—sort of like using tundra tires on an ultralight. They also had a very nasty habit of getting the wire-wound control very hot at nearly full-on of the lamps and melting the wire at one end of the control.

So, in the 1970s we came up with a scheme to replace those clunky old wirewound rheostats/pots with transistors and very small carbon element potentiometer controls. We also found that keeping the transistor itself from burning up with an incandescent load meant either a giant heat sink (great for Minnesota winters, not so much for Arizona summers) or going to what is called a pulse width modulation (PWM) circuit where the transistor was full on (very low voltage but very high current) or full off (very high voltage but very low current), which kept the transistor relatively cool, and the good old incandescent bulb did its averaging trick and dimmed quite nicely. 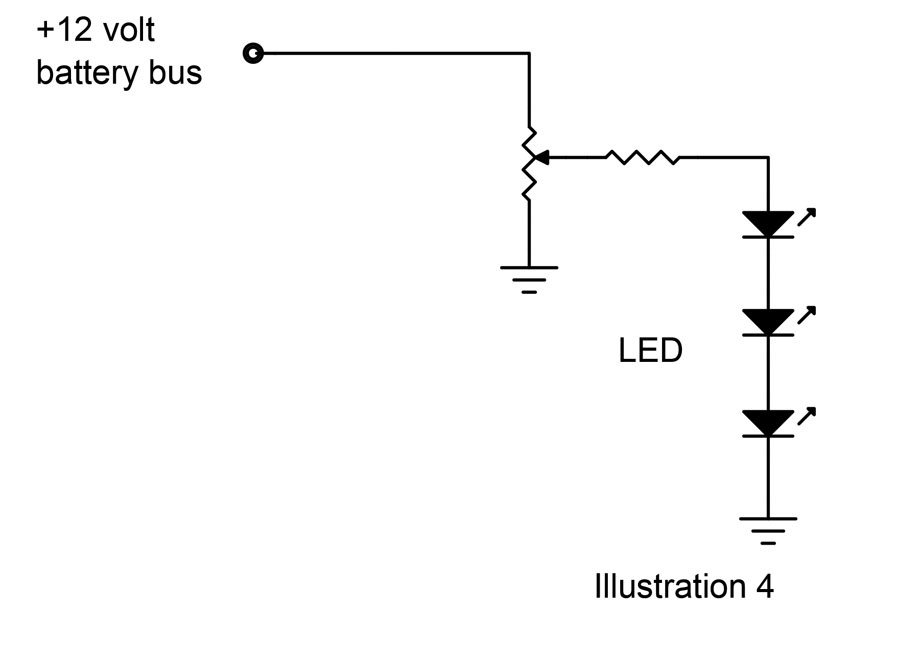 Illustration 4: Running a few LEDs in series to increase efficiency with a single carbon pot. 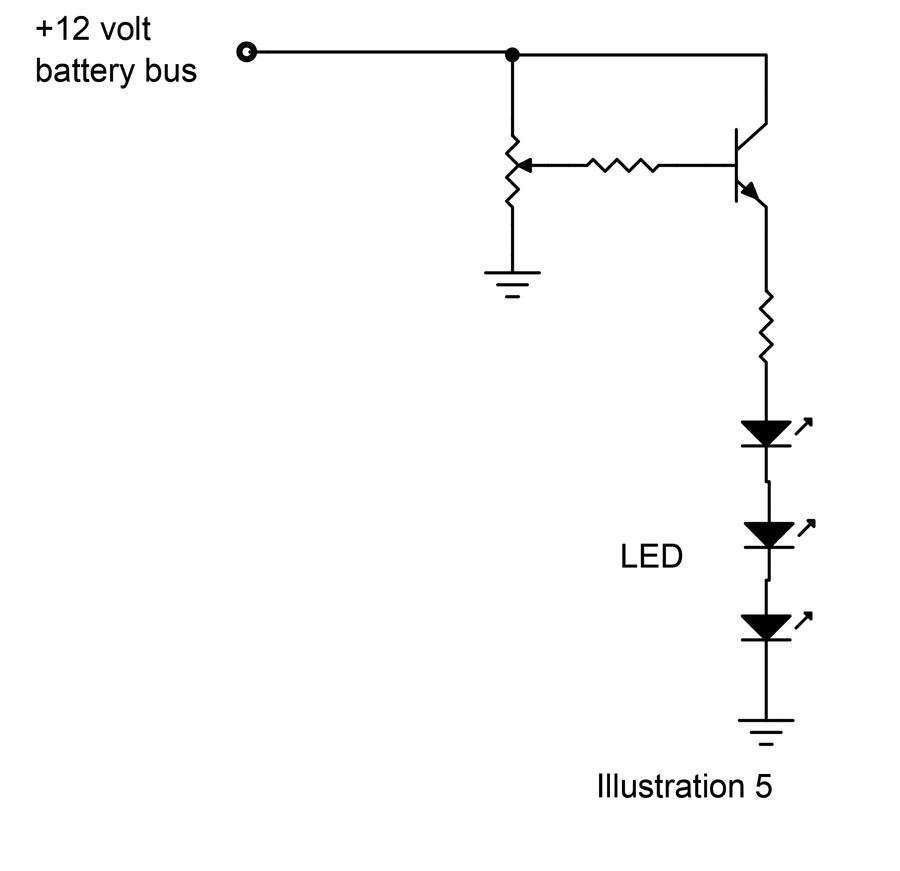 Illustration 5: Early 1970s implementation of a single transistor, a small carbon pot, and a string of LEDs.

PWM for LEDs that turn on and off in microseconds doesn’t work so well. As a matter of fact, with the eye’s capability for peak detection, the LED is either full on or full off, no dimming in between. You might just as well replace the PWM dimmer control with an on-off switch.

The answer is to use a dimmer intended for LEDs. With the greatly reduced current draw of LEDs, going back to a plain old transistor dimmer can be done for pennies without the need for a giant heat sink. For those of you who want to experiment with homebrewing your own dimmer, I’ve included a few diagrams to let you do the experiments. Next month, the ferrite current sensor I promised a couple of months ago. 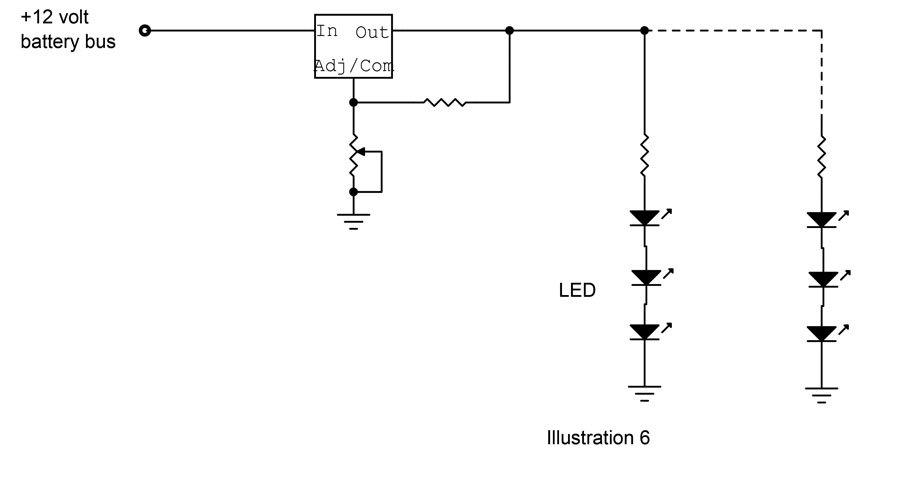 Illustration 6: Current technology using an adjustable regulator and a small carbon pot to dim a few strings of LEDs.

As to the title on the previous page, I used to think fairy tales started off “Once upon a time…” I’ve come to think that modern fairy tales start off, “If elected, I promise…” See you next month…Until then…Stay tuned…

Roy Beisswenger - January 17, 2012
0
Not all airports welcome “out of the ordinary” aircraft such as gyros, ultralights or powered parachutes. If you’ve been shut out, here are some tips to get you back in. By Roy Beisswenger.

Patrick Thomson - June 11, 2010
0
Pleats, punctures and vacuum loss, oh my! Patrick Thomson addresses all of these potential problems and more in the last installment of his series on vacuum bagging at home.