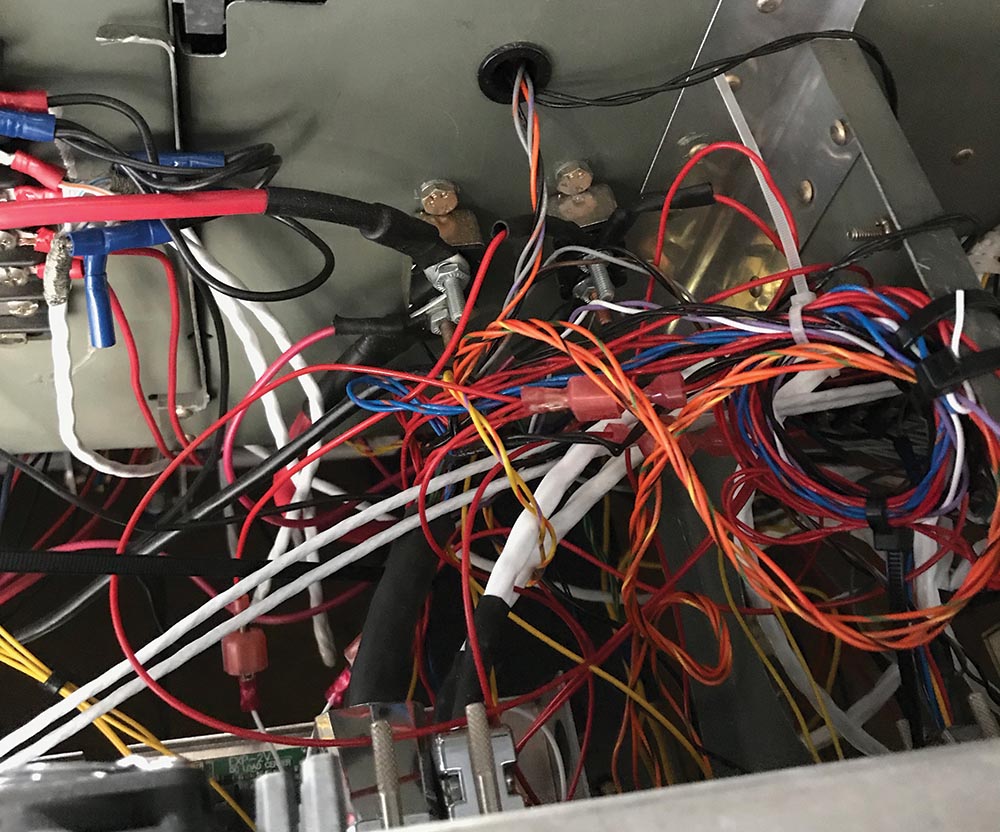 If wiring is not your strong suit, then by all means get help or take one of the EAA electrical courses. Signal quality is very important, with some avionics having restrictions on routing and shielding.

One of the questions I often get asked has to do with the things I find on prebuy inspections. Sometimes it is from a curiosity perspective, and other times it is from someone who is thinking about buying an amateur-built airplane. While I certainly don’t have enough room in this column to address all of the problem areas (nor am I planning on starting a series), I thought it might make sense to address some of the more egregious examples I have seen, especially the repetitive ones. Before you think, here he goes again on jam nuts, I concede I’ve addressed that particular area enough for now—but no promises I’m not coming back to it at some point in the future if needed!

I can only guess at how many experimental aircraft builders exist out there, but there’s no doubt the number probably easily exceeds 20,000 worldwide. Van’s Aircraft alone represents 10,000+ flying aircraft. Many of these have had multiple builders/owners prior to completion. So, some of you may recognize some of the things I am going to point out in this column, but mostly it will be a compilation of repeatable offenses. My desire is that those of you still building will take a look at your own project and either recognize a need for change or feel good about what you are doing.

The big wrapper I want to put around the whole thing is to understand that building an airplane is supposed to be enjoyable and fun. Yes, truth be told, there are many days and times that will seem like really hard work. If there aren’t some days when you wonder how you got yourself into this, then you haven’t been building long enough. Don’t even begin to think you are going to build an airplane without busting a fingernail. Everyone, and I mean everyone, will have some scar, a hole drilled in a finger, or some other story to talk about when it is finished. You may cry at times, maybe even swear, but with dedication and perseverance you will have accomplished a task that many can’t even dream about. The memories created during the build, both good and bad, will be just the start of another journey of even more incredible memories with family and friends. If it’s your first airplane, build it the way the designer intended it to be built. It will get done faster and probably be safer than making modifications that haven’t been included by the manufacturer. 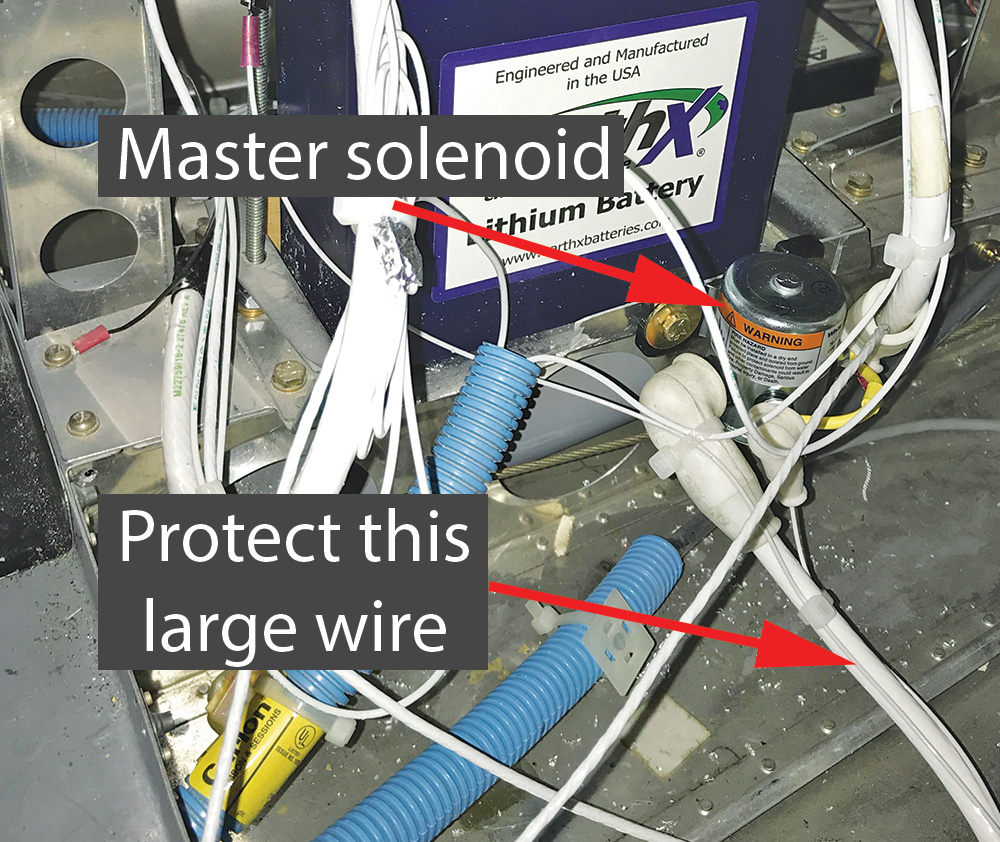 A main battery in the aft fuselage area should have some kind of protection for the large wire going forward. Standard practice is a master solenoid that allows it to be disconnected. I have seen these installed without a master solenoid, which can be very dangerous in the event of the wire chafing or an accident.

It’s important to be honest with yourself as you go through the building journey. We are supposed to be doing this for education, right? So, accept the fact that you may not know everything, and even if you think you might know it, you just might not have the skills to execute. In one of my earlier columns, I mentioned a line from a movie that I thought was really pertinent when it came to aircraft building, and that is “A man (or woman) has got to know his/her limitations.” I used myself as an example. Even though I have taken welding courses, and enjoy welding something when the opportunity presents itself, there is no way I will ever weld on anything that is supposed to fly. I know I have not yet developed that particular skill set well enough. When I need something welded on an aircraft, and I have, I go get the person with the right skill set to get it done properly and safely.

Unfortunately, from my observations, seeking help or advice from others doesn’t seem to be a strong suit for many builders. I especially see this when it comes to electrical systems and engine installations, which is not surprising as many kits leave completion of these parts of the aircraft up to the builder. Unfortunately, these two areas are quite critical. There are lots of ways to get help these days, with everything from the EAA Tech Counselor programs, EAA chapters, and online type forums. In my mind there is really no excuse for completing an airplane without having someone more experienced than you look it over. With tools like FaceTime, there doesn’t even have to be travel involved. I make use of FaceTime quite often to help a builder through a particular question. 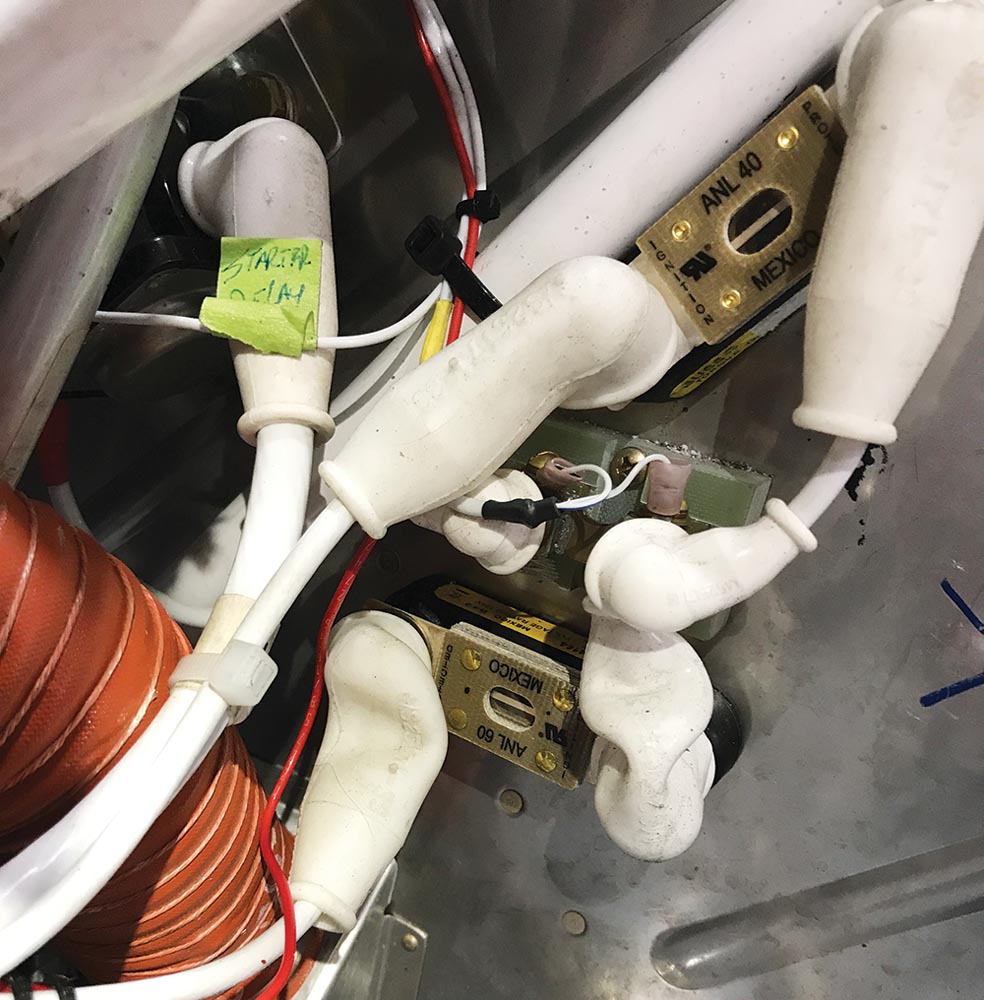 On high-current wires, such as battery and alternator wires, it is a good idea to cover the connection with a rubber terminal nipple. It’s very easy to make contact with a metal tool when doing maintenance, and the arcing and potential damage can be quite serious.

The electrical systems in our aircraft are much more complicated than the simple homebuilt aircraft of yesteryear. Where once we only needed to be concerned about a 12-volt bus and some grounds, we now have a need for all different kinds of signals on top of the 12 volts, such as RS-232, CAN bus, and ARINC, all of which may have different shielding, grounding, and length requirements. Of course, since we are building our airplanes with so much more capability than yesteryear, we need multiple backup systems, dual alternators, and multiple kinds of batteries. Yikes! This is where I see the biggest problems, some of which are downright dangerous. I know I have shared some of them with you in past columns, with things such as solid copper house wiring installed in an RV-10, but some continue to surprise me. 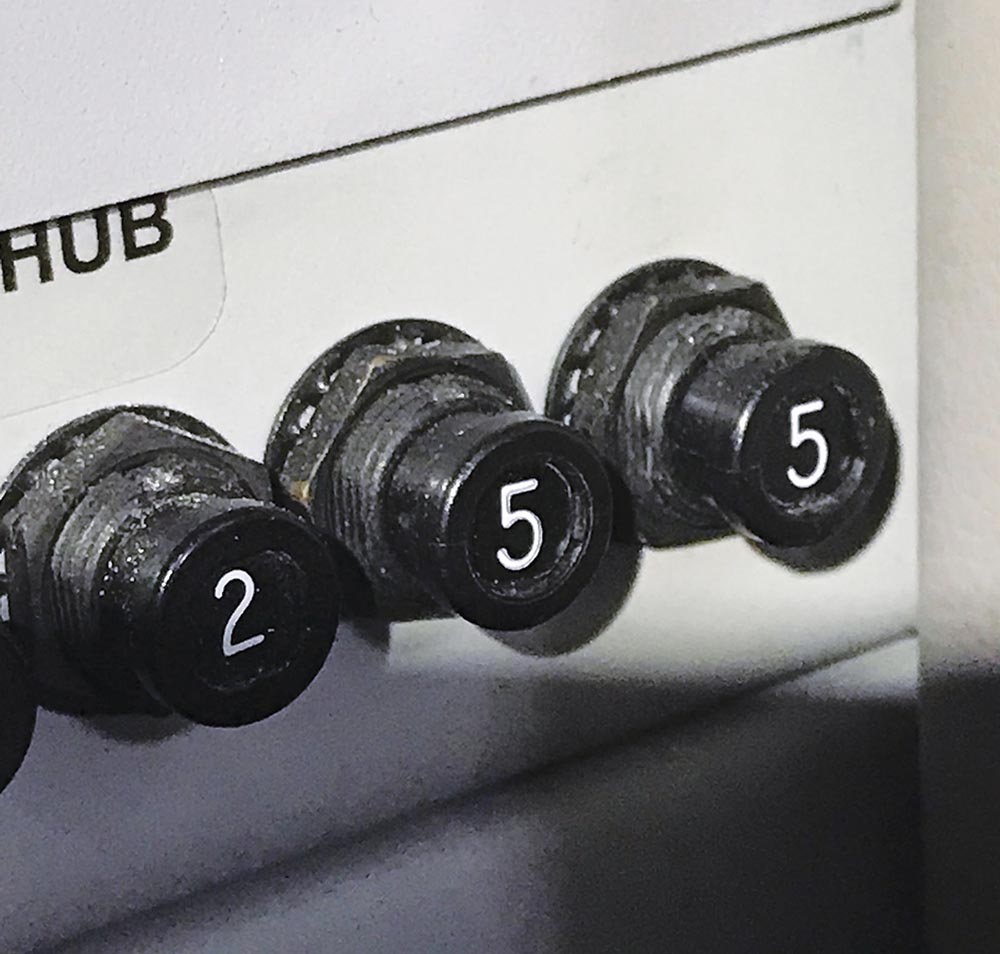 So I ask you: If any of these breakers popped in flight, would you reset them? A label would certainly be in order here.

Most recently I had a non-builder RV-10 owner bring his airplane to me from clear across the country, claiming every time he flew he had to recharge the batteries, and the GPS would constantly reset while in flight, along with a host of other problems. There were two buses installed with two switches, one for “A” bus and one for “B” bus. “A” bus was driven by a 60-amp alternator that, by the way, had a 10-gauge wire as the primary feed, which is not nearly large enough. “B” bus, which I calculated had at least a 15-20 amp load wired to it, was powered by an SD-8 standby alternator. That is a permanent magnet alternator that is capable of 8 amps at cruising rpm and has very little output during ground operations. So the battery just continues to be depleted while on the ground to such a point that, even in flight, the SD-8 can’t begin to recharge it and carry the bus load at the same time. It is a losing proposition.

Wires and switches to nowhere? Avoid dangerous practices that could cause fire hazards or loss of power, such as leaving a dangling wire.

One of my pet peeves, besides jam nuts, of course, is having unlabeled circuit breakers and/or switches on the instrument panel. Another RV-10 had two of each, and when I asked what they were for, he said he didn’t know (he was the second owner). He then asked if I might be “sporty” and activate the switches to see what they might do. Not this guy! I proceeded to trace the wires, and the circuit breakers were actually the field wires for the primary and secondary alternators. Hmm…seems like a good idea to label those to me. The switches? They had two wires attached to them that went nowhere. They were just dangling! 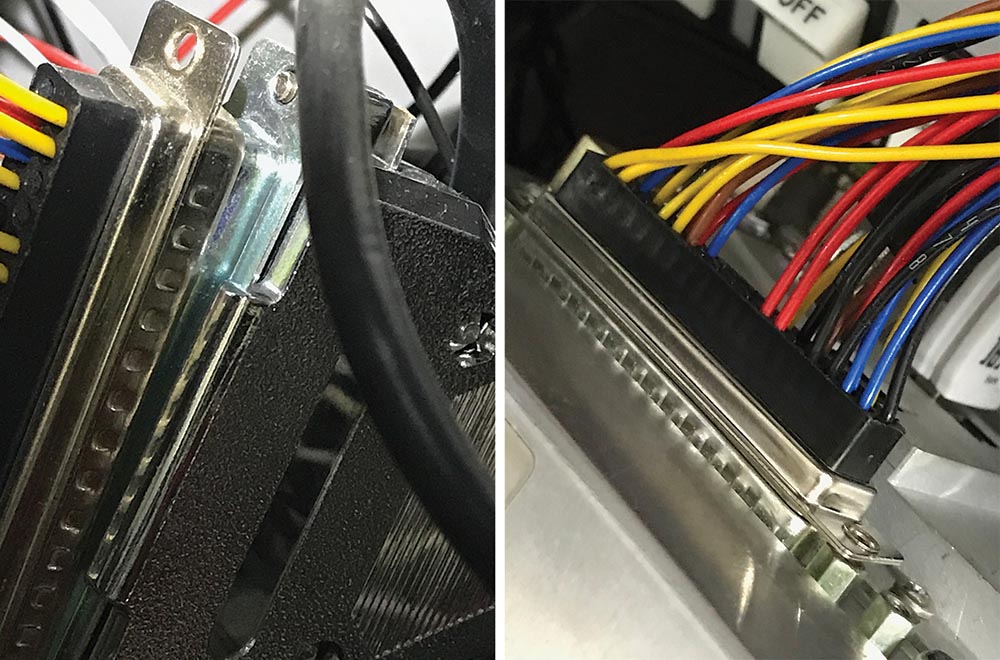 These connectors need backshells with proper strain relief and screw fasteners so they don’t come loose. 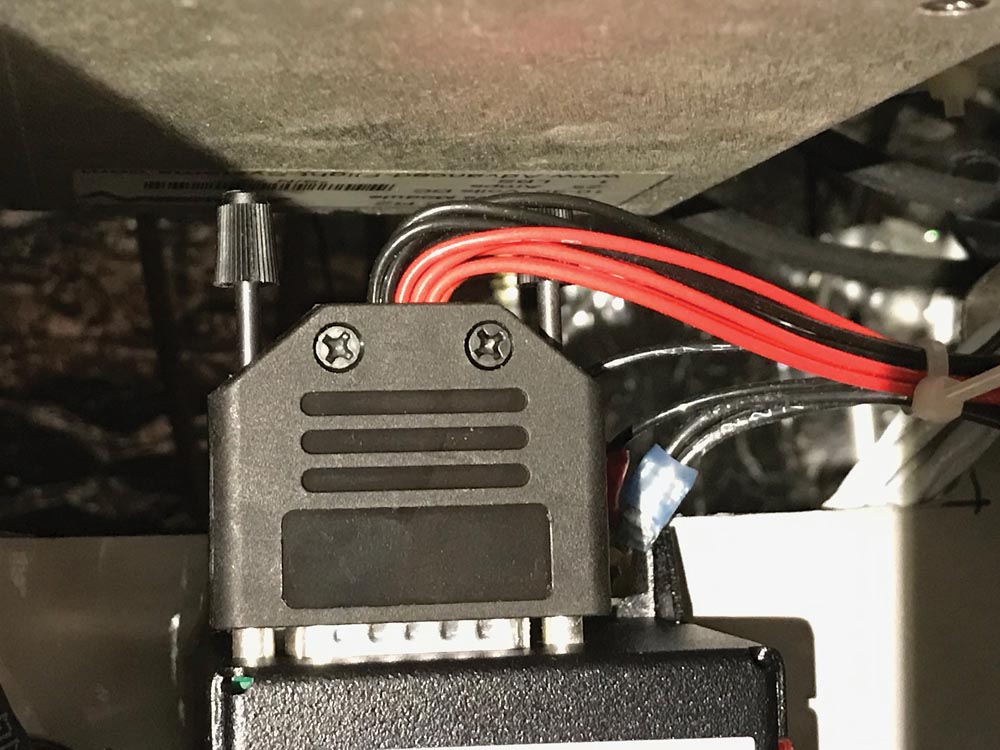 Backshells with thumbscrews help maintain alignment and provide a secure connection in the high-vibration environment of an aircraft.

With regards to all of the different connectors we now use for the electronic circuitry, supporting those wires through the proper use of backshell connectors and strain relief is really important. I have been asked to chase down a number of intermittent problems on various airplanes, only to find unsupported connectors, with some only partially installed and ready to fall off.

The pitot-static system is another area that seems to give builders some trouble. When not installed properly, problems can be exhibited in the strangest ways. For example, if you happen to have a particular model of aircraft that seems 10-20 knots faster than everyone else’s, there’s a pretty good chance it has nothing to do with your super building skills. I heard one seller of an RV-8 tell the buyer that he flew it to the prebuy location doing 190 knots indicated airspeed at 2500 feet. Really? I mentioned he had a static leak, and he claimed he just had it checked. Lo and behold, when I pulled the baggage compartment bulkhead to look in the aft fuselage, the right-side static hose was disconnected from the static port. 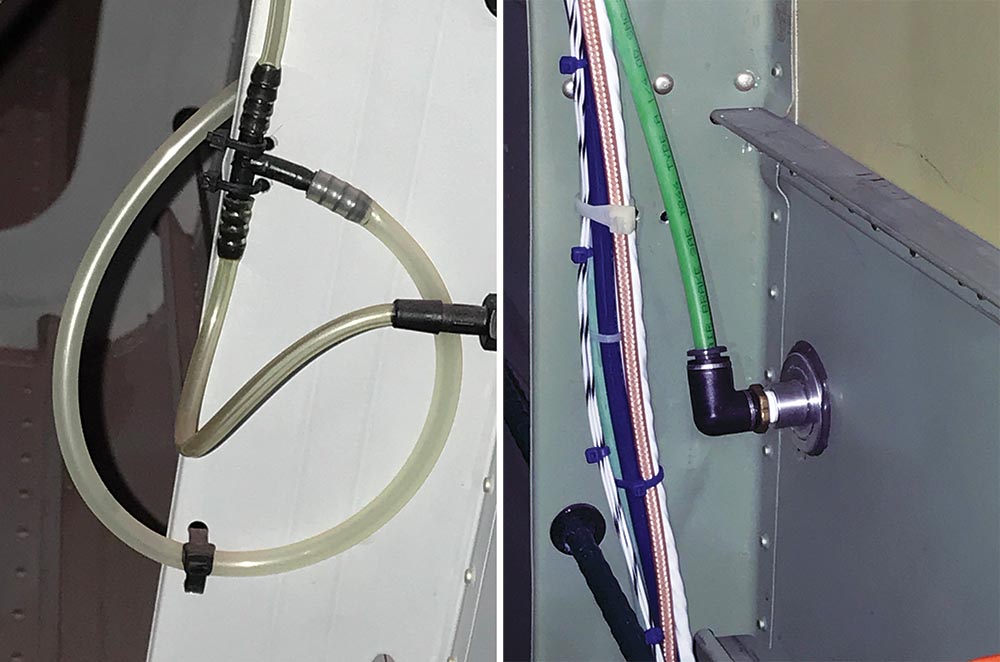 The routing of the static line on the left is a prime candidate for water entrapment. The line should exit the port and be routed uphill, then tee’d to the other static port and routed forward to the instrument panel or ADAHRS. A much better installation is shown on the right.

Another customer said he needed his autopilot checked because it wouldn’t hold altitude. I listened to the description and said I didn’t think it was the autopilot. Upon opening up the aft fuselage, I discovered almost a cup of water in the static lines. Both static ports were plumbed going downhill, thus making it easy for blowing rain to get into the ports and clog the lines. This was on an airplane that was always tied down outside. Of course, it could happen to you on a trip when you are tied down for the night and a storm happens by. That could certainly take the fun out of the trip. 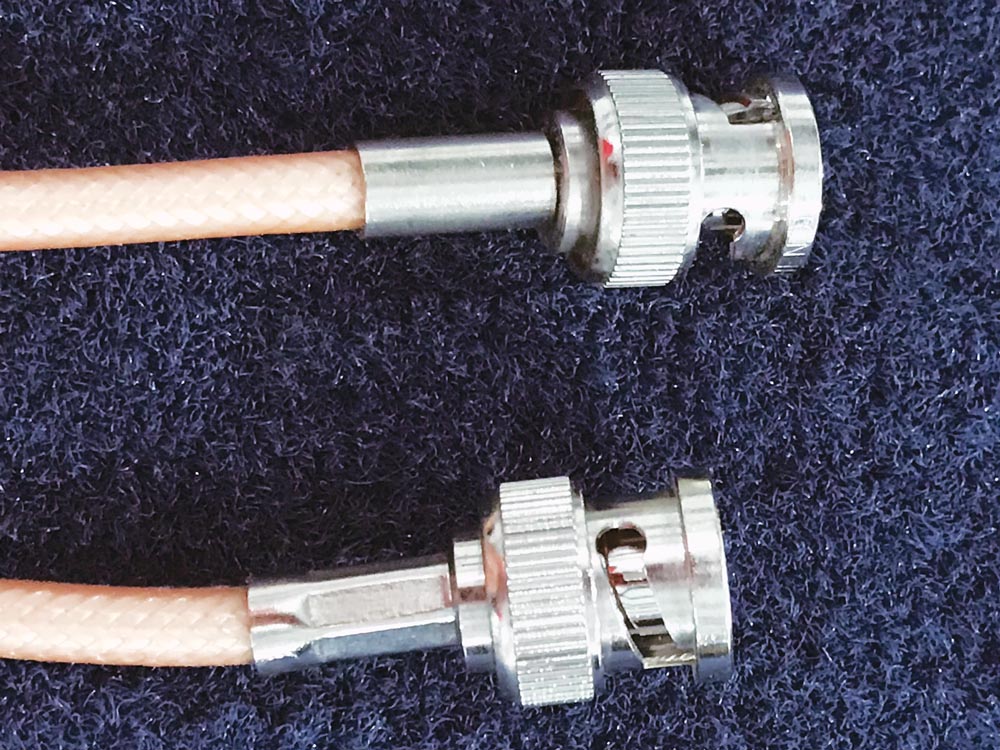 It is important to properly crimp the coax shield to the connector. These connectors were on the same aircraft, with the pilot reporting intermittent ADS-B traffic and weather. The uncrimped version is on top, and the properly crimped one is on the bottom.

By the way, for those of you having pro shops build your airplane (yes, we know it happens), you might consider having a knowledgeable person perform an acceptance inspection. All of the pictures in this column, except the rubber boots and static system, were from an RV-10 built by a well-recognized pro shop.

Next month, I’ll continue with some engine and airframe do’s and don’ts.