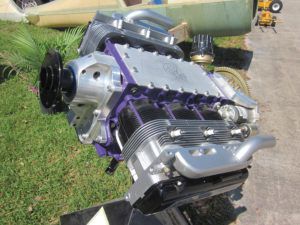 Bill Clapp remains a busy man, running an FBO, flight school, Saberwing aircraft and the Spyder Corvair engines aimed mainly at powering Saberwing Experimentals. He even moved his operation a short distance onto his own property during the COVID slowdown, so there are no mechanical changes to his Spyder 100 and 125 engines this year.

But Clapp has gotten three of his prototype turbocharged Corvair engines building flight hours since last year. He hopes to have a turbo package ready by summer 2022, but it’s too early to get in a froth over it just yet.

More good news from Azalea is there have been no price increases—yet. If necessary, Clapp says he will raise prices later in 2022 as the cost of business has gone up, but so far he’s waiting and seeing.

To review the technical details, the naturally aspirated 100-hp engine is built from reconditioned GM parts reinforced by a steel front hub on the crankshaft, an added front main bearing, nitriding, a 30-amp rear-mounted alternator and plenty of new service parts. The 125-hp version gets its oomph from a brand-new, counterweighted, 1/4-inch stroker crankshaft taking it out to 3.1 liters. This is without having to cut the case for overly large cylinders, thus preserving case integrity.

All Spyder Corvair engines are built to order, so count on some lead time. Clapp does keep a generous supply of core engines and associated parts in house, so there is no delay hunting down basic engine parts. While waiting, customers can review a multitude of Corvair teardown, operation and other manuals at Clapp’s Azalea Aviation website. Locals and those willing to travel can also take advantage of builder assist and tutorial programs Clapp puts on at his Cook County, Georgia, home base, pandemics allowing. Yet more Corvair support comes via cowlings, spinners, props and so on for Zenith and Sonex airframes among other applications.

What’s special at SPA is displacement. Interested in upping the oomph in Corvairs, the Wesemans have backed the development of highly modified 3.0- and 3.3-liter unassembled Corvair kits. The 125-hp 3.0 uses big-bore cylinders on a set of bored-out heads and case while the 125+ hp 3.3 adds a billet crankshaft to the big-bore kit. Therefore, these are premium, higher-powered engines selling for more than the standard displacement engines from Wynne, but just the thing for hot rod sportsters. 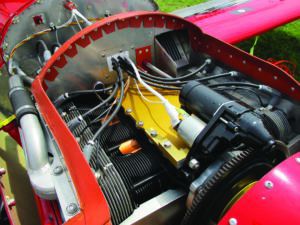 “Impossible” is the only word to describe discussing aero conversion Corvairs and go two minutes without mentioning William Wynne. The outspoken force energizing Fly Corvair, Wynne has made flying Corvairs his life’s calling for the past 34 years.

Although he actually has a variety of Corvair engines in his hip pocket, today Wynne has zeroed in on his 110-hp, 2855cc version. “It’s the main engine I am promoting as the best combination of quality and still good value. It offers all the good tech improvements, such as Ross pistons and other advances, but doesn’t have the high-end costs of recent years. As a complete kit, with carb, ignition, starter and so on, it is $12,600. If you want it assembled, it’s $13,600.”

Even better, if you can visit Wynne, he is the consummate enabler, ready to offer his expertise and shop to those wanting to assemble their own engine under his supervision. You can even run the finished engine on his test stand.

Wynne has been busy bringing small parts production in-house at Fly Corvair. “I moved as much manufacturing [as possible] in-house over COVID…CNC, boring bars.I expanded the shop. Most of the 2850 is made right here in my shop. I just do it myself. What makes the engine partially affordable is not a ton of contractors. I still have some really good machine shops, but not many, and not many components such as a gearbox. [I’m also] doing things in quantities. [It allows] tighter control and it pays off.”

Aside from his engines, Wynne is the source of engine manuals, supporting pieces such as intake and exhaust manifolds, cowling parts and propellers; plus he gives many talks and is a genuine supporter of the builder community.