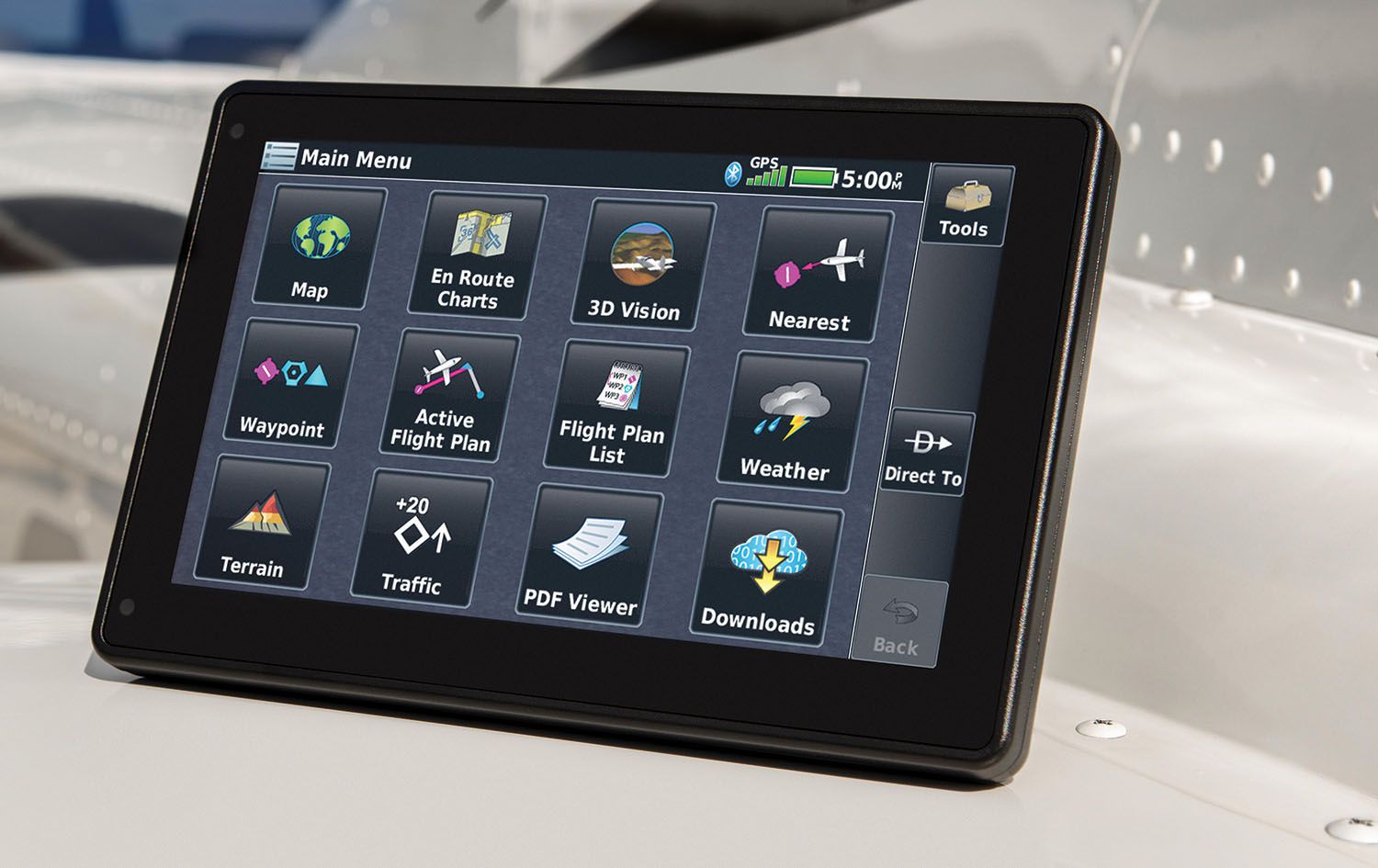 You might think that portable GPS as a product category would have breathed its last by now, replaced by tablet-based apps and electronic flight instruments that put everything in one place. You might think that, but Garmin, apparently, doesn’t, which is why the aera 760 exists. Introduced earlier this year, the 760 is the bigger brother to the aera 660, which is still available. The 760 features a 7-inch screen and full connectivity to Garmin’s slate of other portable devices, including the GDL series of portable weather/traffic products. But the 760 also carries more traditional wired connections that form alternatives to wirelessly connecting and can provide power as well as data.

So let’s dispense with the specs. In a box roughly 7 inches tall, almost 5 inches wide and nearly an inch thick—that’s a smaller footprint than an Apple iPad mini with a whole lot more thickness—Garmin includes a GPS receiver, Bluetooth, a Wi-Fi transceiver and a full database. That database can be expanded by plugging a chip into the Micro SD slot at the top, right next to the USB-C connector, which the 760 can use for power and data management with a computer. The internal battery is said to be good for 4 hours with the backlight at 80%. There’s also a conventional D-sub connector (DB-9) on the provided mounting shoe that offers access to power and two serial connections.

Since you’re going to ask eventually, I’ll say now that the aera’s display is noticeably (though not radically) brighter than a current-generation iPad mini, which is helpful for sunsplashed cockpits. But you pay the price in resolution. The aera’s resolution is a woeful 800×480 pixels, where the latest iPad mini has a resolution of 2048×1536 in a slightly larger (7.9-inch) screen. It’s a big difference on the spec sheet but also a factor in use.

Lay of the Land

It’s inevitable we’ll compare the 760 to a similarly sized iPad running Garmin’s own Pilot app, so I’ll start by saying the aera’s basic menu structure and presentation is well suited for a busy, bumpy cockpit. The main menu is a set of 12 blocks, each bigger than your thumbprint, that make it easy to move into the core functions. And, here, unlike in the Pilot app, Garmin segregates functions into separate screens, rather than relying as much on overlays. So you have the Map page, which does have a set of overlays, separated from the En Route Charts page, which is a digital representation of a VFR sectional or IFR en route chart. A 3D Vision screen provides an EFIS-like display, which gets its resolution from the GPS or, if connected to an outside attitude source (like a GDL), then it’ll show real attitude. (It does not convey actual airspeed or altitude, showing GPS-derived data instead.)

The other functions found on the main menu include Nearest Airport, Waypoint data, Terrain, access to your Active Flight Plan and to your Flight Plan List. Then there are the Weather and Traffic pages, which require connection to an ADS-B/TIS-B source, such as a GDL 5X or a Garmin transponder with ADS-B In. (Worth noting is that with the Wi-Fi capability, you can get weather on the ground if you have internet on some other device; I had no trouble getting the aera connected to a phone-based hotspot.)

The Tools menu takes you into the secondary features including the Setup pages. And while the touchscreen allows “flick” scrolling, a pair of Up and Down buttons persist on every screen, as does a Back button to help you reclaim the Main Menu without getting lost. Overall, Garmin has managed to keep the menus simple and self-explanatory.

You’ll be spending most of the time on the Map page, and it’s generally a good one. The low resolution tends to make the display seem more cluttered than it does on the Pilot app for the same amount of data, so I found myself frequently turning layers on and off, and changing the map detail on the fly. The Menu button on the bottom gives you quick access to the layers. A wonderfully flexible configuration menu allows you to highly customize several data groups (including the nature of map data, airport and airspace presentation, and so on) to help refine what is shown at various zoom levels. Most of these have an Auto mode, but you can define exactly when you’ll see certain data elements. Garmin’s been doing this a long time and it shows.

What you will notice on the main Map Options page is that you can’t see everything at once. To prevent confusion, you can’t have Terrain and Weather on the same overlay, and selecting weather shuts off Fuel Prices. If you’re accustomed to the Pilot app, you know you can load the main map up with 1001 things, which is not always the best tactic! The aera forces compromises that are, for the most part, mild annoyances, not deal breakers.

Since the introduction of the GPSMAP 396 so many years back, one of the key attractions of Garmin’s higher-end portables is access to in-flight weather. For this, the aera connects either through the proprietary Connext Bluetooth or by being wired in. The wired side supports several data protocols, both in and out, but weather will come through a wired Connext only. (You can also get traffic only from a GTX-series transponder via a dedicated TIS serial input.) Unlike the Pilot app, the aera can connect to only one Bluetooth source at a time; so if you happen to have, say, a GDL 50 and a GNX 375, you have to decide which of those the aera will talk to. You can have one source wired and one via Bluetooth, but there’s a catch—the wired connection does not display all the weather products available from the source. Garmin says there are data-stream restrictions underpinning this, and that this may not be a forever limitation.

That said, the aera presents all the weather data available from the source, even if not simultaneously on the map. You get NEXRAD radar (regional and CONUS from ADS-B In and either composite or base reflectivity via internet), lightning, cloud tops forecast, METARs, TAFs, AIRMETs, SIGMETs, PIREPs, NOTAMs and both turbulence and icing forecasts. The product set is slightly different when connected to a SiriusXM source, and not as full as you’ll get on the Pilot app when on the ground, using an internet connection.

The aera’s wired connectivity gives it a leg up if you don’t have Connext-capable equipment on board. For example, it’ll send and receive flight plan data to most of Garmin’s navigators, even some of the older units. It’ll also share com-frequency info with radios that accept RS-232-based channeling; the newest nav/coms from Garmin as well as the SL 30/40 units do. Whenever you see a frequency on the aera, all you need to do is tap it and it’ll show up in the standby window of your com radio. Of course, if your onboard radios have Garmin’s Bluetooth-based Connext capability, the aera will share flight plans, weather and traffic that way.

The Wi-Fi capability allows the aera to connect via internet while you’re still on the ground, but it also allows for semi-automated database updates. If you have a data account, the database has expired elements and the aera sees that the Wi-Fi is active, it’ll prompt you to update at that time. You can also update via computer via the USB, which is also how you make firmware changes outside of the database.

So, aera or Pilot?

One of the aera’s toughest competitors is unquestionably Garmin’s own Pilot app playing on a tablet. As mentioned, the aera is significantly thicker than an iPad mini but with a smaller screen. Garmin sees that as a net positive, since the 760 is intrinsically “hardened” to pilot-meted abuse. I’ll vouch for that. While I was buckling up for a flight, I hadn’t quite seated the aera in its provided mount and managed to bump it from its hold, where it, of course, fell through the open door to the ground. It suffered a small nick on the case but suffered no other issues. I doubt my iPad would have fared so well. The aera also has a powerful built-in GPS, so you won’t have to use the GPS from, say, a GDL-series box or the internal GPS on your iPad (and only those with cellular modules at that). You get some systemic redundancy.

Also in the aera’s favor is slightly better screen brightness than the current iPad mini and better heat resistance. (iPads are somewhat notoriously sensitive to heat, and care must be taken to keep them out of the sun and in the path of some cooling air during the summer.) That said, the aera I tested frequently sent a warning that the battery was running hot while the unit was powered through the DB-9 connector. It never dimmed the screen or shut down, but it wasn’t all cucumber-like, either.

The other side of the coin, then. An iPad mini’s screen resolution is dramatically better at the cost of brightness, though the brightness is mainly noticeable with the units side by side. The Pilot app is very sophisticated, even more so now that Garmin has added a bunch of new features in Version 10, and the ability to layer multiple data sets onto one screen and keep it legible is a real boon. Flight-planning capabilities in Pilot far outstrip the aera’s feature set. And, finally, Pilot has a much more compelling logbook that automatically syncs when you have a FlyGarmin account, and if Pilot is connected through an attitude-enabled source (again the GDL series or an appropriate panel mount), that logbook also contains the track of each logged flight.

The aera 760 costs $1599 and comes with a cradle mount and power cords. A year’s database updates to include Garmin’s FliteCharts (instrument approach procedures), full aeronautical data including VFR sectionals and IFR en route charts, SafeTaxi, Obstacle, Terrain and an Airport Directory costs $169.99 for the US. For Pilot, you’ll need the Premium upgrade, which doubles the base price of $79.99 a year—call it a wash. An iPad mini in base configuration (64 gb of memory, Wi-Fi-only) is $399, making the iPad/Pilot combo just under $560. In fact, you could have that plus a GDL 50 to provide in-cockpit traffic and weather for less than $1300.

There’s no doubt the aera 760 is a strong evolution of the do-everything portable GPS; it’s well executed, easy to use (arguably more so for the tablet-phobic than the Pilot app) and built like a tank. But the lure of much more agile apps on different platforms has proven too much, making the tablet-based aviation app a better, cheaper, more compelling solution.

Square Ends on Round Tubes