The first function of the vertical tail is to stabilize the airplane about the yaw axis and help keep the nose pointed into the oncoming airstream.

Directional stability (also known as weather vane stability) is what determines the airplane’s response to being yawed relative to the oncoming airstream. The airplane is stable when it tends to yaw to point the nose back into the wind and unstable if the yawing moments tend to increase the yaw.

A vertical tail is mounted at the aft end of the fuselage so that any side force it generates acts well aft of the center of gravity. This means that the tail side force generates a stabilizing yawing moment that counters the instability of the tail-off configuration. When the airplane yaws, the sideslip generates an angle of attack on the vertical tail that causes it to generate lift (side force) that pushes the tail toward the retreating side of the airplane. Accordingly, for example, a nose-left yaw will cause the vertical tail to generate a leftward side force.

The side force on the vertical tail, acting through the leverage of the tail arm, produces a yawing moment that opposes the initial yaw and points the nose back into the wind.

The level of directional stabilization the vertical tail generates is a function of both the tail area and the tail arm.

Historically, it took designers longer to understand the value of significant directional stability to give an airplane good lateral/directional flying quality than to develop and understand longitudinal stability. Early airplanes had relatively small, often all-moving vertical tails. They were barely stable or neutrally stable directionally, and accordingly required constant pilot input on the rudders to maintain coordinated flight and maneuver the airplane.

It was not until the 1930s that airplanes began to have sufficient vertical tail area and arm to have what would be considered acceptable lateral/directional flying qualities.

The response of the airplane to being placed at a steady-state sideslip angle relative to the air (directional stability) is an important factor determining its lateral/directional flying qualities.

A second important factor is the response of the airplane to a yaw rate. The response of any system to a rate of motion or rotation is called damping. Damping is stable (or positive) if the system generates a force or moment that opposes the motion and tends to stop it.

Turning to the airplane, we can see that without yaw damping the airplane would yaw left and right continuously after being perturbed, unless the pilot actively used rudder to stop the yawing motion.

When the airplane rotates about the yaw axis (yaw rate), the rotation pushes the vertical tail sideways through the air. This sideways motion of the tail rotates the apparent wind and generates an angle of attack on the tail.

This yaw-rate induced angle of attack causes the tail to generate a side force, which produces a yawing moment that opposes the yaw rate. The magnitude of this side force is directly proportional to the yaw rate.

Adequate yaw damping is very important in giving the airplane acceptable lateral/directional flying qualities. In particular there is a lateral/directional mode called Dutch roll where yawing and rolling motions couple together into a “wallowing” motion. Yaw damping is critical to damping out this coupled motion, and adequate damping or the Dutch roll mode is critical to allow the pilot to maneuver and control the airplane precisely in roll and yaw.

Yaw damping at higher angles of attack is also a major factor in determining the spin characteristics of the airplane. A spin is a coupled rolling and yawing motion of the airplane that is driven by the asymmetry of lift and yawing moment generated when one wing of an airplane is stalled more than the other. Most airplanes have at least one steady-state spin mode where the asymmetric forces drive the rotation and the airplane will autorotate indefinitely. The airplane will only recover from the spin if the pilot moves the controls to break the stable, autorotating condition.

The yaw damping the vertical tail provides has a very large influence over the spin mode. Yaw damping opposes the yaw rate in the spin and tends to slow the spin. Also, the faster the yaw rate in a spin, the more inertial forces tend to flatten the attitude of the airplane and increase the angle of attack. A vertical tail design that generates significant yaw damping at post-stall angles of attack will help give the airplane benign spin characteristics.

Next month we will take a look at the directional control tasks the vertical tail and rudder must perform.

Dean Sigler - January 17, 2012
0
Rapid strides are being made in the development of ultralight electric motorgliders. Dean Sigler talks to a few of the manufacturers at the forefront of this field. 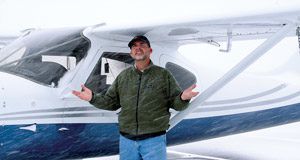