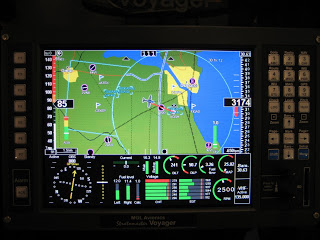 It’s been said that “bigger is better,” but where panel functionality is concerned, it just ain’t always the case. MGL Avionics has recently earned a solid niche among a plethora of glass panel manufacturers for building solid products that deliver the goods at very attractive prices. To add to the company’s lineup, welcome the Voyager, a scaled-down version of the top-line Odyssey, fitting neatly in places where 10.4-inch-diagonal big brother was just too big to go.

The Voyager only gives up one thing when compared to the Odyssey, which is 2 inches of diagonal screen size. But all other functions remain the same, including nine pages of user-configurable screens that can be programmed for so many more functions than can be covered here. GPS, AHRS, terrain mapping, engine monitoring, fuel flow, flight data recording, airborne traffic, autopilot interface and even remote radio operation are just some of its features. 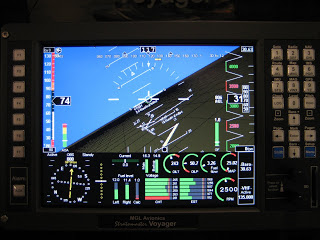 What the Voyager gives up, when compared to the really high-end systems that can cost from 10 to 15 times more, is the razor-sharp graphics and high data sampling and screen refresh rates that you might expect in multi-million dollar aircraft. The Voyager updates its screen 10 times per second, its graphics are perfectly legible, and it’s affordable for the average homebuilder. MGL estimates that a full Voyager or Odyssey system, including probes, will run around $5600 USD for a four cylinder Lycoming or Continental installation, add a couple hundred bucks more for six cylinders.

Rounding out the MGL product line on display at AirVenture were the prototype nav and com radios, Mode S transponder, and autopilot, allowing for a complete MGL brand panel in the near future. Prices and release dates of these products are said to be coming soon.