This title phrase can, like so much in our language, be used to convey the truth of the matter, as intended, “a little trouble” or “a small pain in the a**.” Then again, it can be found drenched in irony, pulled from the vat still dripping of the stuff—“getting a new engine isn’t as easy as it could be” or “finding a powerplant for quick delivery and a reasonable price has become a royal pain in the a**.” Therefore, engine shoppers today can find themselves in a spot of bother by either definition.

You are surely as tired of hearing it as I am of typing it, but supply-chain problems continue to reverberate in our world, impacting everything from actual parts to shipments. (In fact, as I write this, UPS has issued a second “shipment exception” in two days on a part I need from Aircraft Spruce.) It hasn’t helped that demand has risen as supply remains crimped, but there is some easing in the market. Some, not a lot, and a bit of that relief comes from a slight shift in purchasing practices. More engine shops are looking to overhaul components for fresh engine builds—cranks, especially, but other components as well—where they once would prefer to install new parts from well-known suppliers.

It’s unlikely that any time soon we’ll be going Mad Max—scrounging bits and pieces just to create a workable engine—but the recent challenges have put the network of suppliers in the spotlight and underscored the dangers of having but one source for some critical components. It’s part of being a teeny-tiny market in the overall world of manufacturing and a market that carries no small amount of potential liability. There surely are many companies capable of constructing an O-360 crank, but few are willing to do it at the small volume and potential legal risk.

Worldwide, manufacturers are slowly returning to some semblance of normal, and if we can stomach the wait, I expect the overall engine market to stabilize and the lead times start to come down by late 2022. When the history of the last few years is written, I expect we’ll say the engine segment gradually recovered capacity, but prices didn’t come down—unless there is some seismic technological shift in the offerings or manufacturing. But we’ve been saying that for, oh, about five decades now.

Perhaps one unexpected beneficiary of current events: alternative engines, especially those based on automotive power units, where the supply of used pieces has remained viable. (Even though the value of used cars is through the roof these days, we’re not yet seeing Mad Max’d Honda Civics become impactful.) Even so, most of these conversion kits have more to them than the engine itself, so don’t be surprised if there are disruptions even so. As Tom Wilson says in his outsized Engine Buyer’s Guide, in most cases, it’s unreasonable to think there are stacks of engines on the shelf just waiting to be shipped from every manufacturer. Here’s where a few phone calls and, even better, a visit to your chosen engine or conversion-kit supplier is a fine idea.

It’s fanciful to think of conventional  air-cooled, opposed-cylinder aero engines as the dinosaur just one footstep ahead of the meteorite—and, therefore, to worry about support in the years (decades) ahead. I’m fairly sanguine about it all for two reasons. First, there are still a lot of them in our world, whether they’re flying daily in homebuilts or primary trainers, or sitting in the back of the hangar as a core engine whose owner is just waiting for the right motivation to send it into the wild again.

But I believe we’ll always have some form of support. What makes me think so is the memory of a visit to Vintage V12s in Tehachapi, California, many years ago. The Rolls-Royce Merlin hasn’t been produced in more than 50 years, but you can still get one maintained, overhauled and even updated. I’m sure it’s not cheap—I didn’t even ask—and I’m sure the number of engines that roll out the door every year is quite small. But it’s a viable business that I’m sure was inconceivable when Rolls ran the first PV-12 in 1933.

As an aside, if you ever get the chance to see a Merlin undressed, take the time. It’s amazing from top to bottom. The design and execution seem, in many ways, way ahead of their time. A beautiful engine even in repose, the big V-12 appears both menacingly large and impossibly beefy—just look at those crank throws!—and impossibly delicate in the gear-driven accessories and such. I couldn’t help but stare and offer a quiet nod of appreciation to those who designed and built it, without a computer anywhere to be found.

Not all COVID-era adaptations are disappearing. EAA is returning in early 2022 with Homebuilders Week after a successful launch of the webinars last year. According to EAA, “More than 16,000 people participated in [2021’s] Homebuilders Week, far exceeding our expectations and making it an easy decision to bring the series back in 2022.” That’s Charlie Becker, EAA’s director of chapters and homebuilt community manager, talking. “We’ve taken the input received from presenters and participants to improve our goal of sharing information and knowledge when it comes to constructing a safe and fun aircraft. We learned from our initial Homebuilders Week that there is a huge demand for the knowledge and information that we presented, whether someone is considering building an airplane for the first time or is seeking to build their foundation of skills and knowledge.”

It’s with a “spot of” humblebrag that I point out the presenters for Homebuilders Week reads like a who’s who of KITPLANES® contributors, including Paul Dye, Dave Prizio, Tom Wilson, Vic Syracuse, Ron Wanttaja and others.

EAA says the “six daily live presentations will begin at 11:30 a.m. Central Time each day (Monday through Friday) and continue until 8:30 p.m. It will include everything from getting started successfully to techniques when building with sheet metal, composites, steel and wood. New and experienced builders will also find in-depth talks on panel planning, wiring, engine selection, FAA certification and flight testing.” 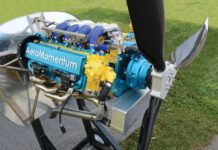