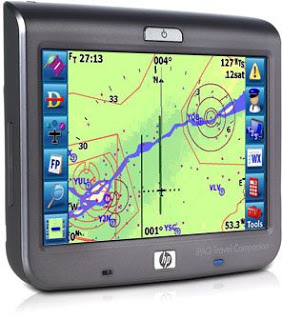 Anywhere Map made quite a splash in the pond of low-cost GPS devices when the company introduced its PDA-based systems in 1999. Early users were attracted to the ability to upgrade the software through their computer, and even get the latest TFRs just before a flight. The separation of the hardware from the software also meant that as the hardware got better, the user could keep it up to date as well.
The Achilles heel had always been the need to interpose ActiveSync. It didn’t always work smoothly, and with a half dozen files to work with, it could be downright frustrating. Discussions with Alan Kirby, product manager at Anywhere Map, revealed that, “Most of our Tech Support requests centered on that one issue; it was too easy to set it up wrong.”

Anywhere Map has addressed this with the release of its Anywhere Travel Companion, cleverly named ATC. It does its downloading without going through ActiveSync by shifting from trying to be all things to all people to being a GPS only. The product’s genesis was as a PDA with GPS added, which meant it needed to use the PDA interface. Now that many of the PDA functions are on your cell phone, PDAs are passé. However, the small screen size of the phone works against it being employed as a GPS.

AWM’s approach was to see that divergence and offer a much larger 4.3-inch screen without the problems of ActiveSync. Early users will also appreciate that this is a touchscreen device as before, but the larger screen means larger buttons and no more using a stylus. This new dessert is topped with a street database, so you still have a multifunction device.

We’ll be doing a review in KITPLANES, but for now visit Anywhere Map for further details.

No Trip to the Mall