On airplanes with manual flight control systems, designers try to design the control surfaces and linkages so that the combination of aerodynamic hinge moments generated by the surfaces and the mechanical advantage of the linkages provide the pilot with the right force feedback in the stick for good flying qualities.

Sometimes, this is not possible, or the airplane exhibits some undesirable characteristics once it is flying. In these cases, one approach to giving the pilot proper pitch feel is to use mechanical springs to compensate for, or augment, the aerodynamic forces feeding into the stick. Several types of systems are used, each for a different purpose.

A down spring is just what the name implies. It is a spring in the control system arranged to pull the stick forward and the elevators down. Usually a down spring is set up to provide a nearly constant force over the normal range of elevator deflection. Down springs are used to help fix problems with speed stability and stick-free instability.

A down spring does not actually change the stick-free static margin of the airplane since it does not change the variation of pitching moment with angle of attack. It does produce an apparent change in stick-free pitch stability because of its effect on the change of pitching moment with airspeed. Down springs are very common and will often prove to be an effective fix. In some situations, however, an airplane with a down spring will have stick-force gradients that meet acceptable standards and will still have a dynamic pitch controllability problem due in part to a problem which is being masked or exacerbated by the down spring.

One very simple way of relieving stick forces is to attach a spring or a bungee to the stick, which provides a force that opposes the stick force. This type of trim system is used on a number of airplanes, including the Schweitzer 1-26 and 2-33 gliders. The spring or bungee system has the primary advantage of mechanical simplicity. No linkages must be routed to the tail of the airplane. Usually, some method of varying spring tension is provided, so the pilot can trim the airplane as airspeed varies.

There are two disadvantages to bungee trim systems. The first is that they can be annoying to the pilot. If the spring is strong enough to trim the highest stick forces the airplane will generate, then the spring forces will be of the same order as the aerodynamic forces acting on the controls. The pilot’s “feel” will therefore be composed of roughly equal parts of spring force and aerodynamic force. The pilot will thus be “flying the spring” as much as he is flying the airplane. If the spring system is not properly designed, the spring can interfere with the pilot’s control feel, making the stick forces excessively heavy, and make the airplane unpleasant to fly, particularly during maneuvering. On the other hand, spring feel systems, if properly designed, can also be used to tailor and improve the control feel of an airplane. 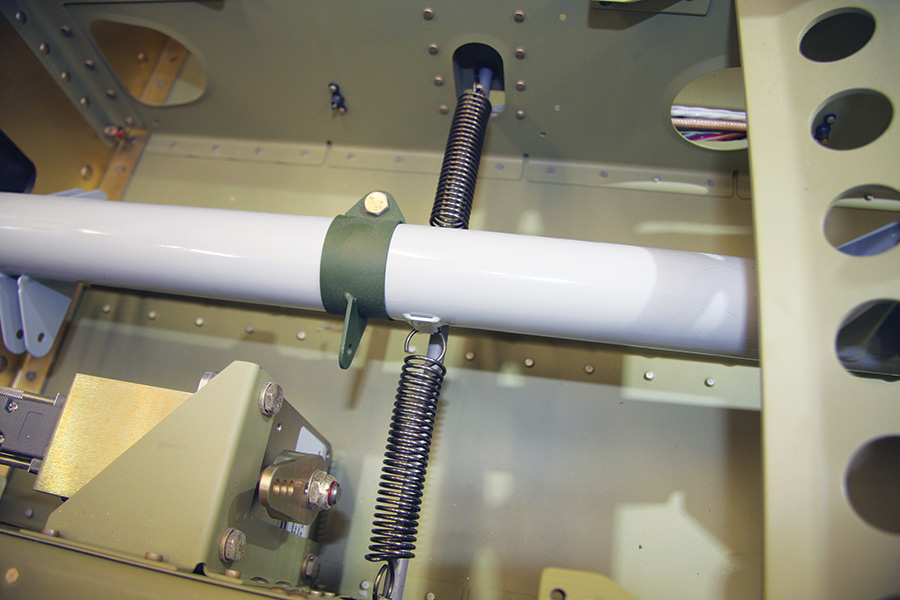 Similar to down springs, the RV-8 uses springs to bias the forces on the aileron system, thereby trimming the airplane in roll by pulling slightly on the stick.

The primary disadvantage of a spring trim system is that the pilot is feeling a mixture of aerodynamic and spring forces through the stick, and they can sometimes combine badly.

Another approach that has been used successfully is to try to take the aerodynamic forces out of the equation, and provide the pilot with feel exclusively with springs. Often this approach is used to enable the use of tail surfaces that would give poor longitudinal flying qualities if the system depended on aerodynamic moments for pitch force feedback.

If the elevators have too little aerodynamic restoring tendency, the stick force required to deflect them will be small. This can cause the stick force per G and/or stick-force velocity gradient to be too low, making the airplane difficult to fly precisely in pitch.

The hinge moment generated by a control surface is proportional to both the area of the surface and its chord. For a given elevator area and control gearing, the smaller the chord, the lower the stick force required to hold a given deflection. If the elevator chord gets too small, pitch control will become oversensitive.

This phenomenon faces the designer with a dilemma. High aspect ratio tail surfaces are more efficient. They give more stabilization for a given wetted area. Unfortunately, small-chord elevators will tend to produce sensitive pitch control.

Another elevator-planform problem may be excessive aerodynamic balance. It is not uncommon to put shielded horn balances on elevators. They are a good place to put mass balances and they reduce the floating tendency of the elevators, which is desirable. Horn balances also reduce restoring tendency. If they are too large, this can be a problem.

One way to attack this problem is to change the aerodynamic configuration of the elevators to increase the amount of opposing hinge moment caused by elevator deflection.

Another way to do this is to deliberately design the elevators to produce very low aerodynamic hinge moments and use a spring cartridge system to provide the necessary stick force to give the pilot proper feel in pitch.

One advantage of a spring cartridge system is that the pitch feel of the airplane can be tailored by adjusting the spring rate of the cartridge. The level of sensitivity can be adjusted to meet flying qualities and can even be customized to individual pilot preferences.

An example of such a system can be found on the Questair Venture. The Venture has unusually high aspect ratio tail surfaces. As we noted earlier, this causes the hinge moments of the elevator to be small and can lead to pitch-sensitive handling. Rather than compromise the aerodynamic efficiency of the airplane to provide proper hinge moments, Venture designer Jim Griswold took another tack. The aerodynamic balance of the elevator was tuned so that the elevator had virtually no floating tendency and very little restoring tendency. Springs in the control linkage provide all of the pitch control force feedback to the pilot. This approach has been very successful. Test pilot Chuck Berthe test-flew the Venture and the results were reported in the September 1993 KITPLANES. Quoting Chuck, “Its flying qualities are much better than most certified airplanes I have flown.”

The Cirrus SR-20 and SR-22 use a similar system. On the Cirrus, an electric motor is provided to move the spring cartridge to trim the airplane. Moving the cartridge changes the neutral position of the centering springs. Since the elevator hinge moments are very low, the system will tend to hold the elevator at this neutral position if the pilot lets go of the stick.

If the elevators are designed properly, a spring cartridge system will not affect speed stability the way a down spring or simple spring trim system does. The speed stability effects of these systems arise from the interaction between the aerodynamic hinge moment generated by the elevator and the mechanical moment generated by the spring. If the elevators have very low hinge moments, the aerodynamic component is removed from the equation, and the spring cartridge will act as a pure positioning spring.

A secondary advantage of the spring cartridge approach is that the elevators will have no tendency to float with the free stream in response to changes in angle of attack. Because of this, there is no difference between the stick-fixed and stick-free longitudinal stability of the airplane, and the most aft allowable CG will be slightly farther aft than an airplane with the same size tail and a conventional trim system.

Marc Cook - May 31, 2021
1
Sometimes, when using shorthand in our conversations about Experimental aviation, we use the term...