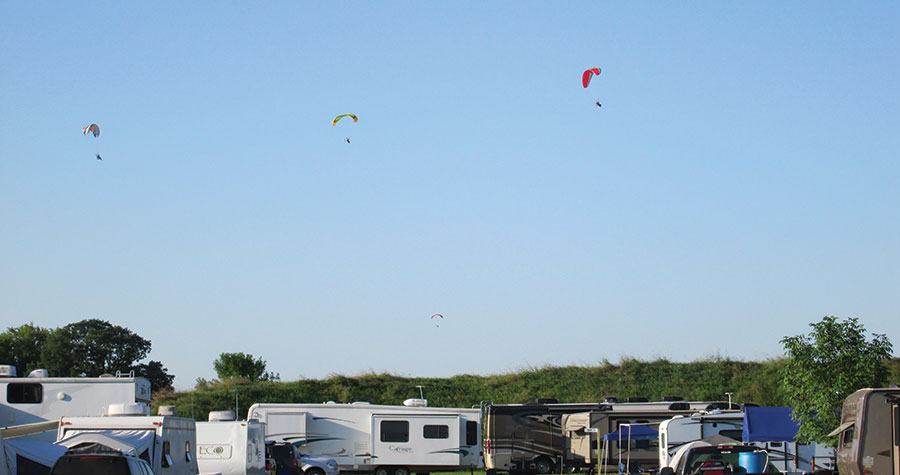 I’ve camped under the wings of a Cessna 170, 172, and 182, stayed in the U of Wisconsin Oshkosh dorms, camped in the classic aircraft tiedown area (aka Fond Du Lac North), camped in the aircraft North 40, stayed at a bed-and-breakfast in Wautoma, a motel in Van Dyne, and once was treated to a stay at the Oshkosh Hilton. In all 32 trips to the show, I had never set foot in what I will call the other Oshkosh—the one you drive into and camp with your automobile—Camp Scholler. Wow, what an eye-opener my 2015 trip was. California to Wisconsin via Missouri is a l-o-n-g trip in an ailing Saturn. 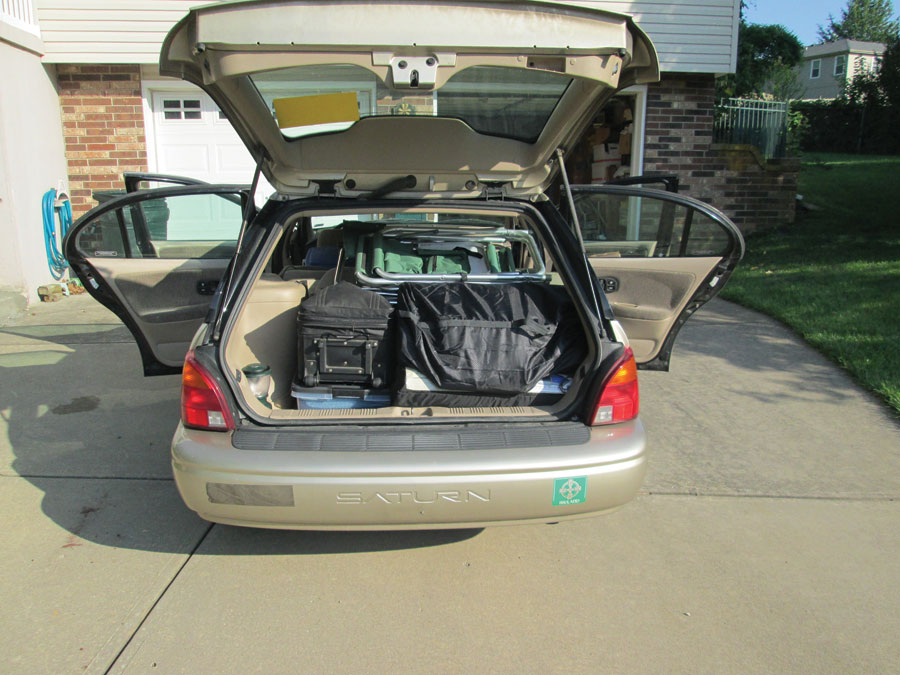 The back of a Saturn easily contains all the camping gear necessary for a week’s stay in Camp Scholler. 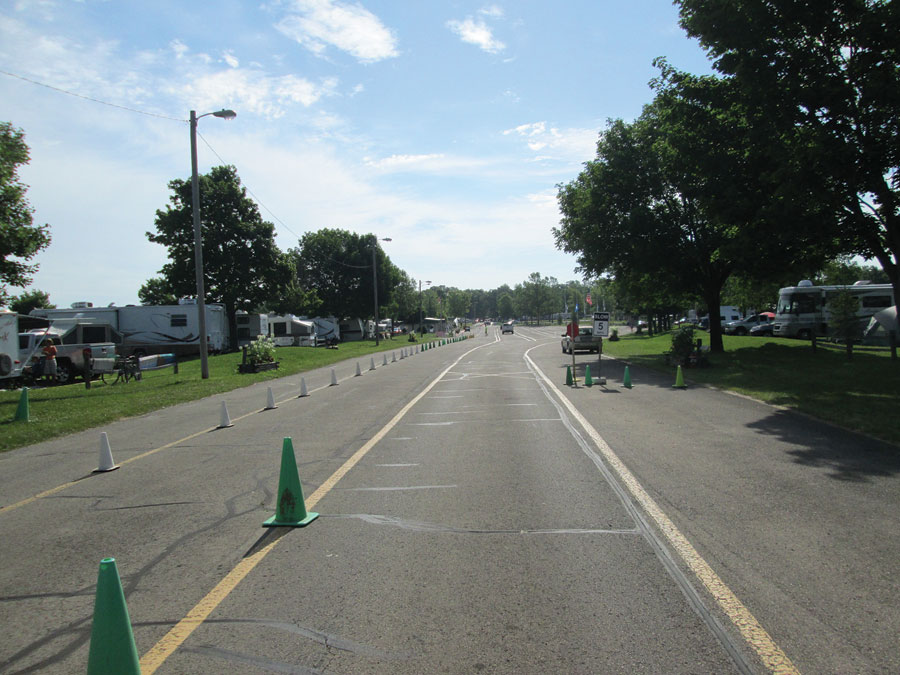 Four lanes to accommodate the heavy traffic. Peak times for traffic are two and three days before the show starts. The fee booth is the little tiny structure just to the left of where the traffic cones stop. 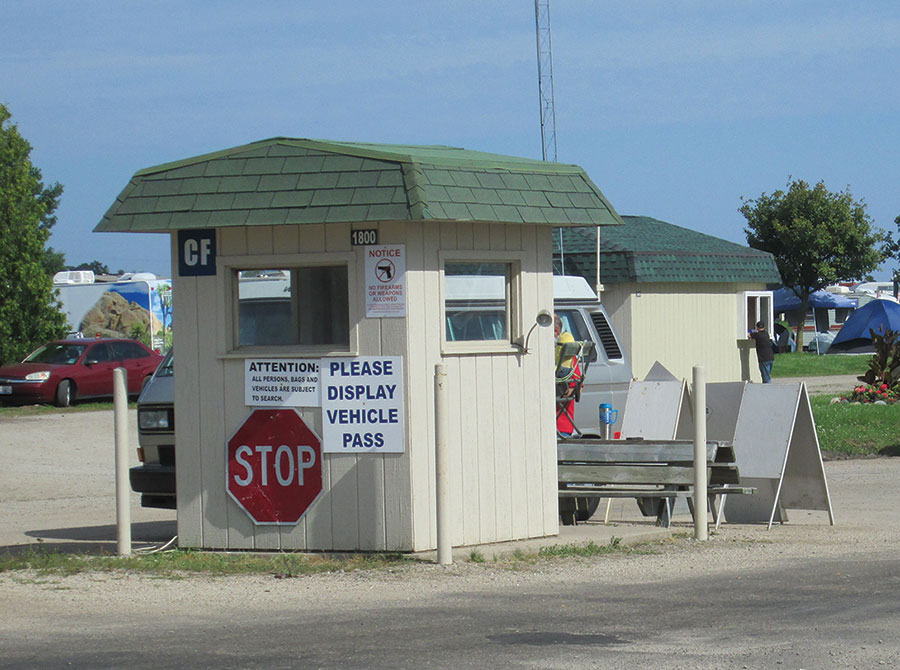 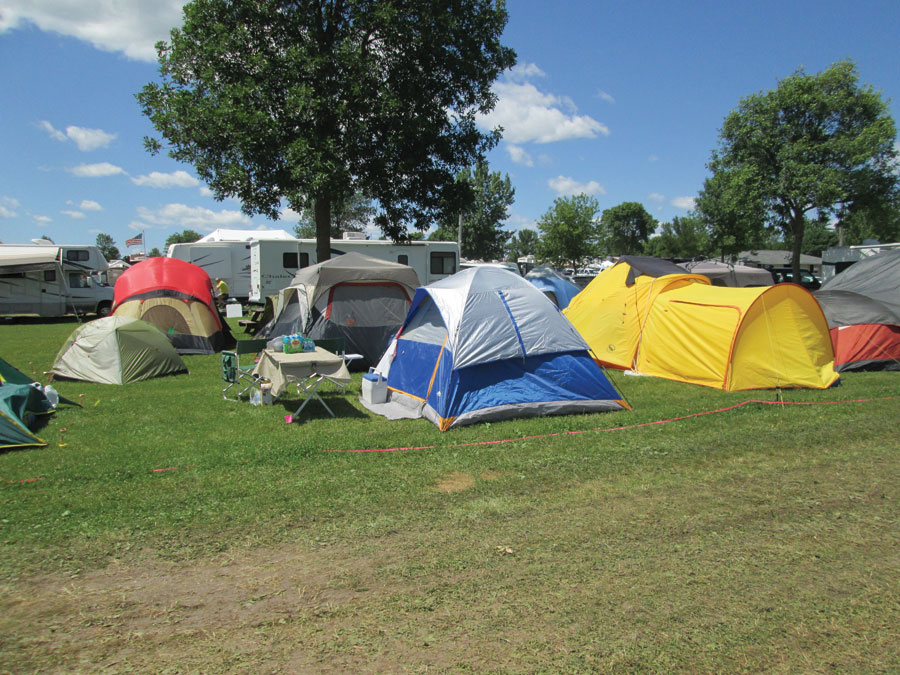 This camping area had a few tents on Sunday afternoon, but by Monday it was packed!

The normal population of the city of Oshkosh is about 65,000. The estimate of the total number of campers at the show is 40,000—of which 32,000 are in Camp Scholler. So roughly half the population of Oshkosh is put into the 350 acres of Scholler. If my math is correct, this is about 500 square feet per person, or a 22×22-foot square. A trip around the grounds shows that this is about right. Not only that, but those 32,000 campers and their cars need to come through one gate when they first get there. But it all seems to go like greased clockwork…when we got there the day before the show started, there weren’t but a dozen or so cars waiting to pay their $26-per-night camping fee at the gate. The day after the show started, there were exactly zero cars waiting at the gate in the hour I waited there. It is amazing that with that many people in that small of a space, nobody felt crowded in the least, and I never saw more than one or two people in a line at any of the facilities. 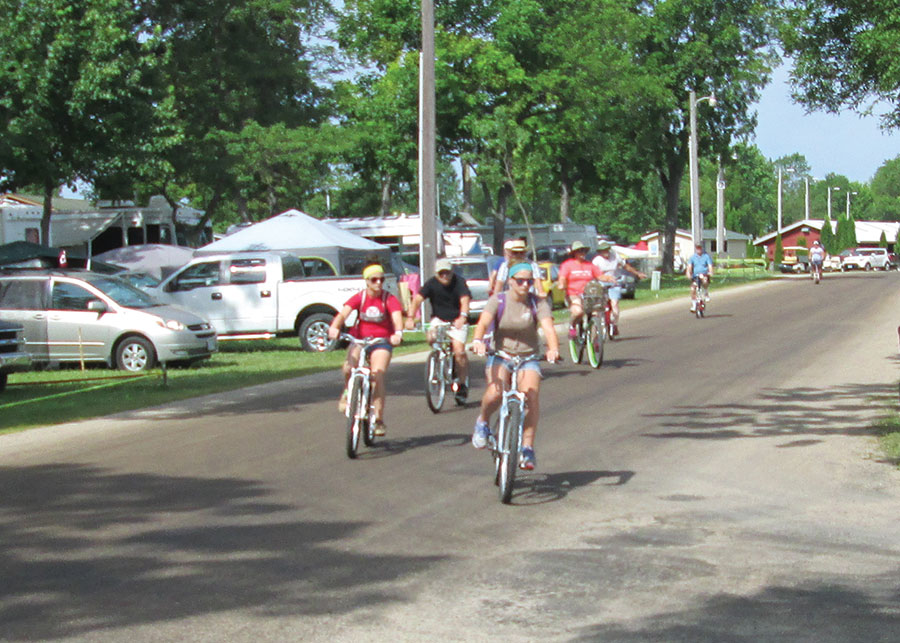 Bicycles, bicycles, and more bicycles. The local Goodwill has hundreds of bikes for sale during the show, and at the end, you simply give them back as a donation. 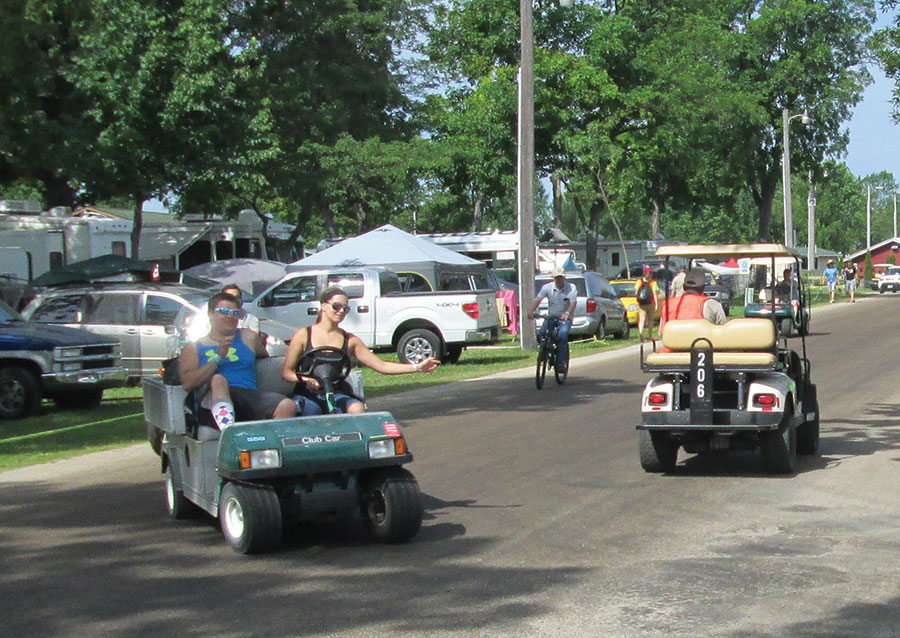 If the bicycles don’t getcha, the kids driving ATVs will. 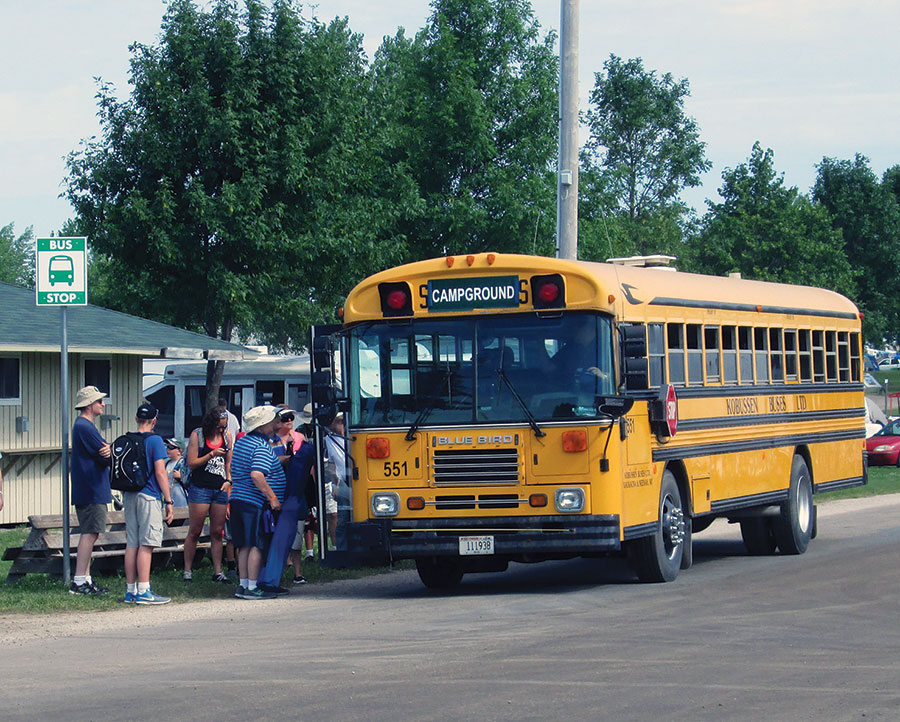 There are buses that will take you around the campground to the various stores and facilities, and will also take you to the bus park. 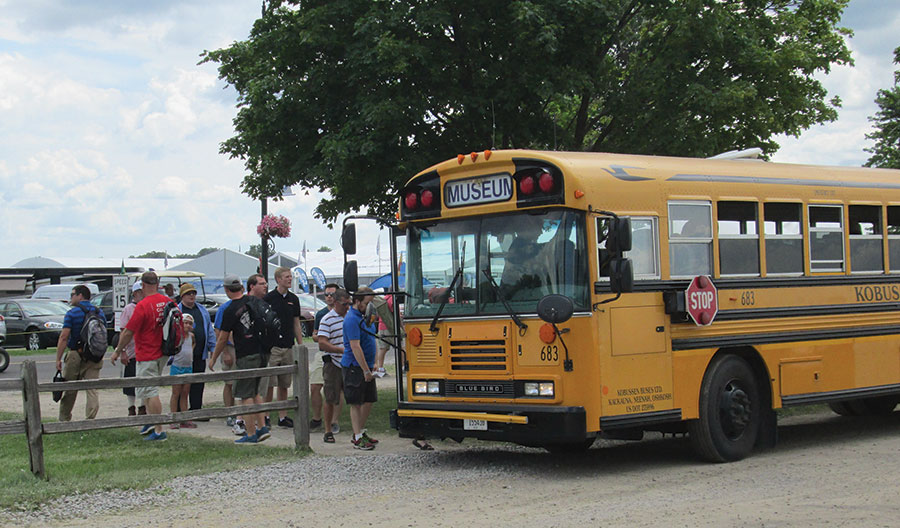 This bus goes to the EAA Museum. Admission is free for the week.

As with all good things, the show and Scholler come to an end. We left on Thursday and about a quarter of the camping spots had ghosts—outlines of where tents had been placed that week. I do like to fly, I do have many friends in the airplane campgrounds, and now we have a new circle of friends that went out of their way to make us welcome and comfortable. See you in 2016, Camp Bacon. 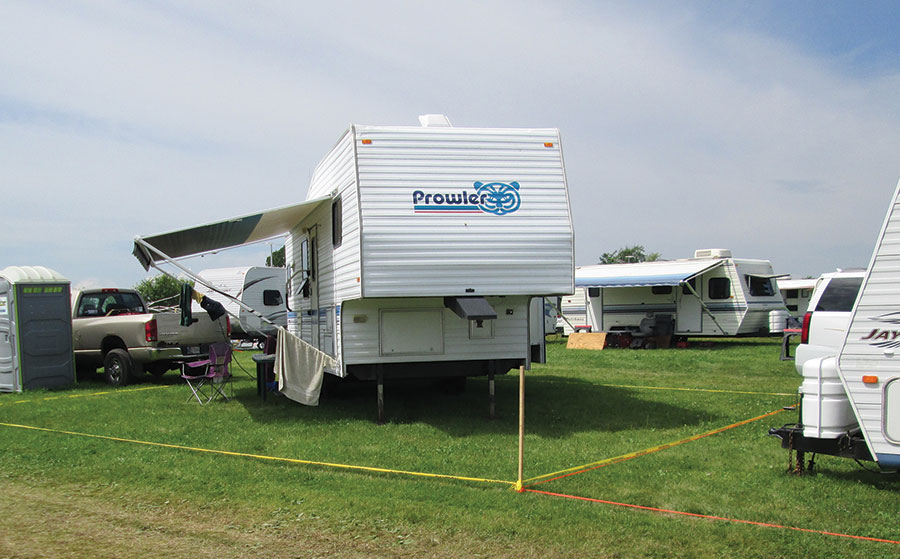 Camping “squares” marked off with colored tape are everywhere. 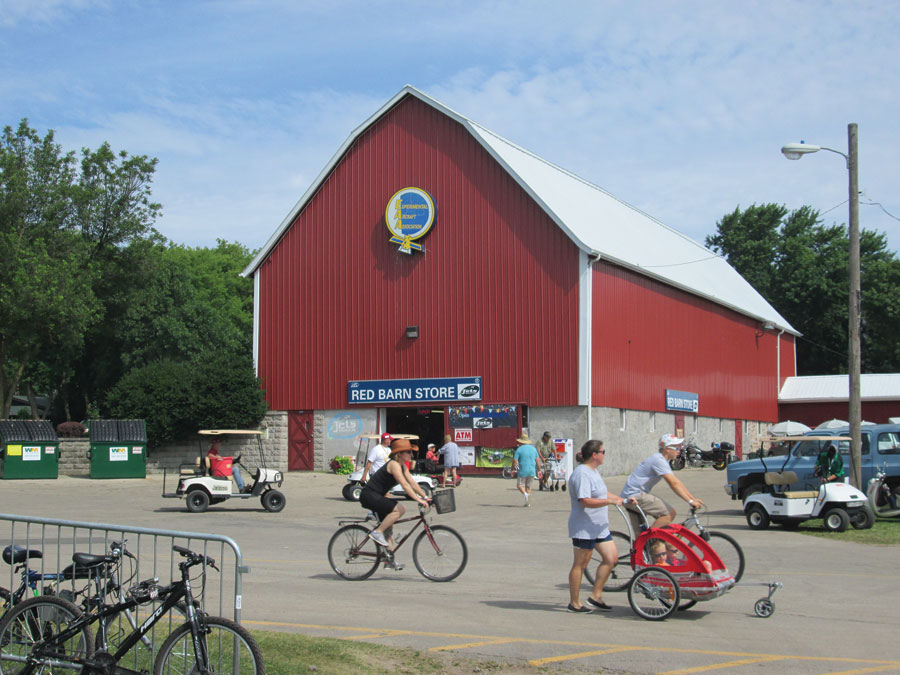 The main camp store. The prices are pretty much in line with the supermarkets in town. 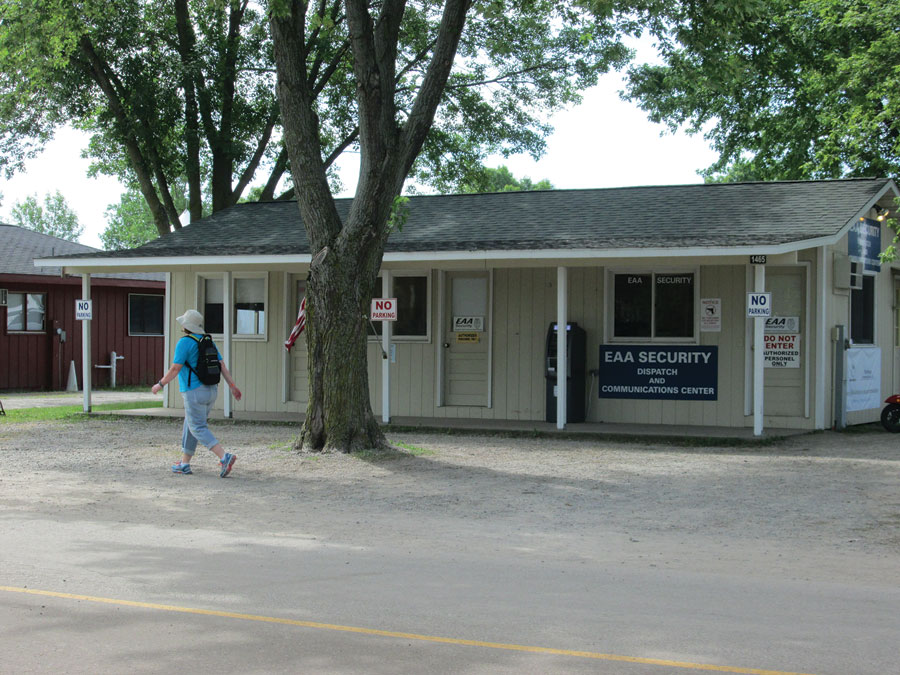 Security headquarters, or as it is more popularly known, the Cop Shop. 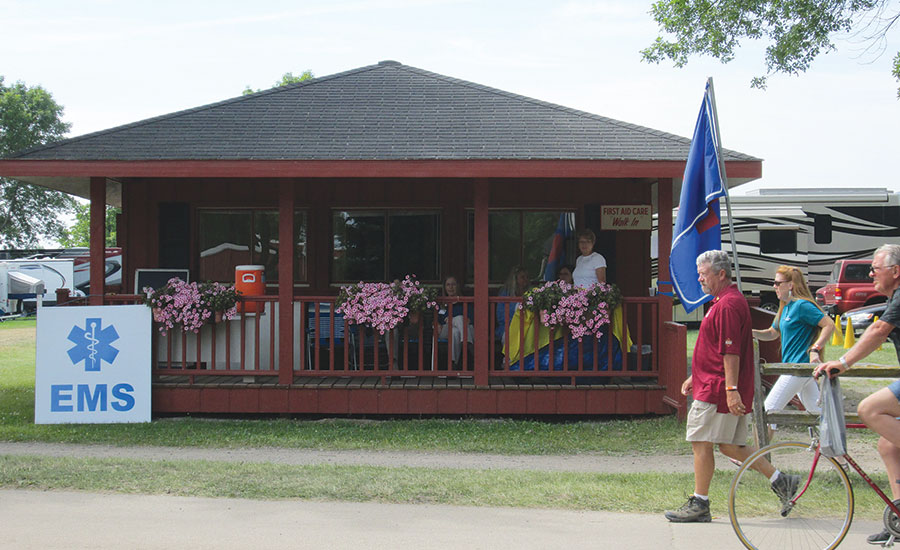 The “hospital” with MDs and RNs from around the world volunteering their time during the show. 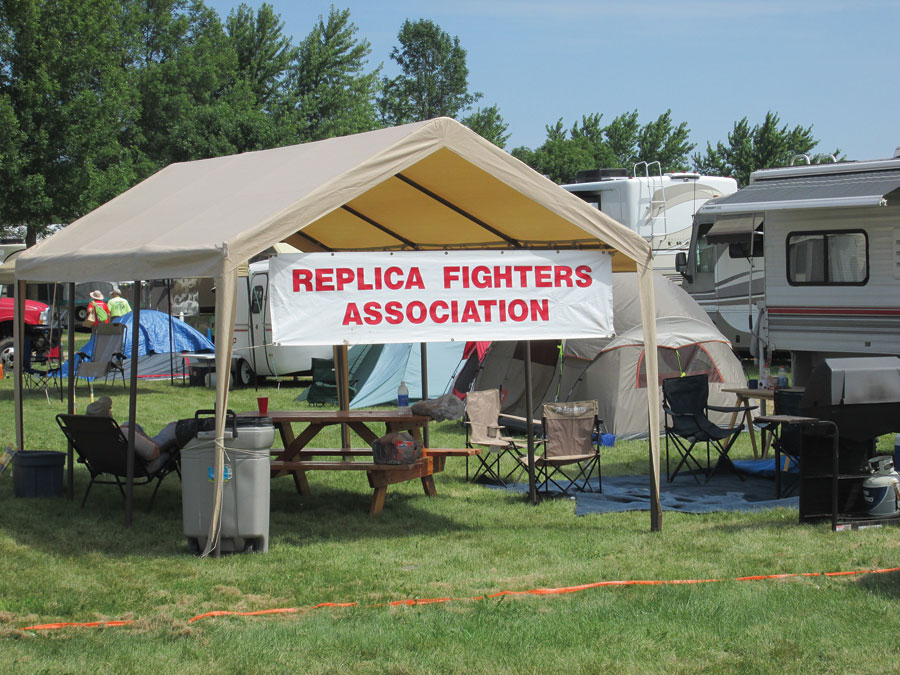 There are small camps within Scholler for folks who have come here year after year. 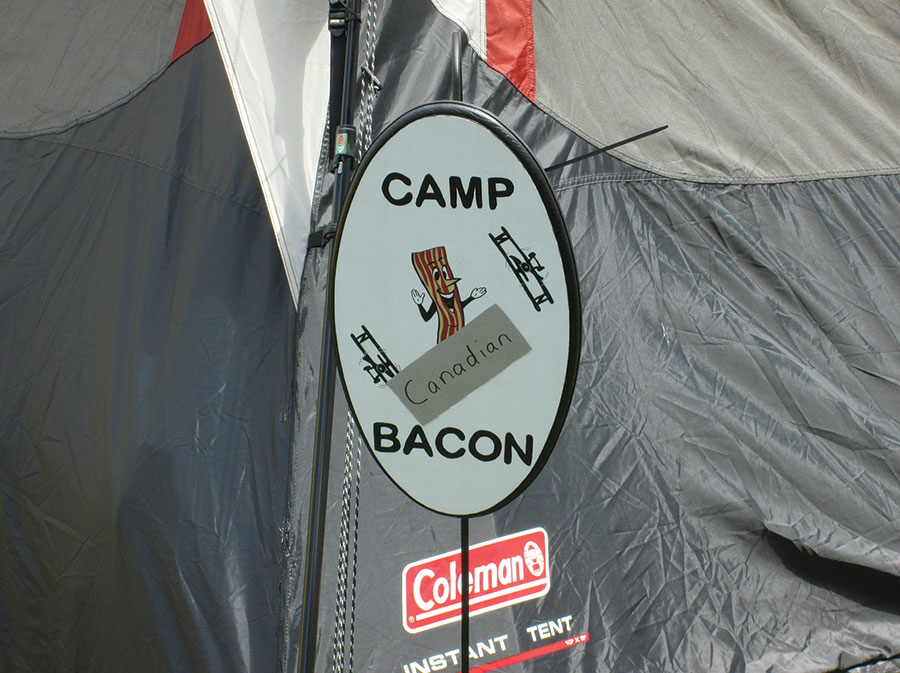 The author’s camp within Scholler was appropriately named.

Teaching Helpers How to Rivet