In the continuing quest to improve airplane performance, designers try to reduce drag everywhere they can. The large draggy objects hanging under the airplane are an obvious place to start. 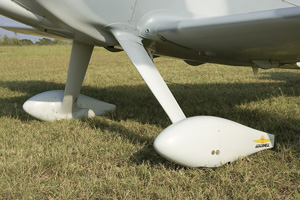 A typical tricycle gear (without fairings) can be responsible for as much as a third of the parasite drag on a light airplane. But good selection of the legs and faired wheels on such aircraft-and in taildragger configurations like the one shown here-can reduce parasite drag by as much as 80%, making gear retraction a questionable design compromise.

The landing gear can be one of the largest sources of drag on an airplane. It annoys airplane designers because it serves no useful function during flight. It is only there because of the requirement to keep the prop and the runway separated when the airplane is on the ground. The obvious way to eliminate the drag of the gear when the airplane is flying is to retract it, and it has become an article of faith that a high-performance airplane will have retractable gear.

There is no doubt that if the airplane is fast enough, retracting the gear makes sense. In spite of this, the question of fixed or retractable is not as clear-cut as it might first appear. In recent years, we have seen some relatively high-performance, fixed-gear airplanes appear on the market, including the Cirrus and the Lancair/Columbia/Corvalis designs. These fixed-gear airplanes are faster than quite a few older retractables.

The gains that come with landing gear retraction come at a price in cost, weight and complexity, both mechanical and operational. Most builders and operators of light airplanes are acutely conscious of money. For the light-airplane designer, the question is whether the gain in performance is worth the cost.

How Much Do You Gain?

No matter how fast (or slow) a homebuilt airplane is, if the airplane has fixed landing gear, the designer will eventually face the question: What about retractable gear? The only good engineering reason to retract landing gear is to reduce the drag of the airplane to make it go faster. The critical question becomes whether the extra speed is worth the trouble. To answer that question we must first determine how much faster.

It is interesting to note that designers of high-performance military aircraft did not become universally convinced that retractable gear was worthwhile until top speeds got significantly above 300 mph. I have in my collection an aerodynamics text from 1936 that dismisses retractable landing gear as not worth the added mechanical complexity and deemed unlikely to gain wide acceptance. Clearly, the authors crystal ball was a bit cloudy, because less than 10 years later nearly all military airplanes had retractable gear.

Despite this, the conclusion was not necessarily foolish. The effect of a given amount of drag reduction on the performance of an airplane depends on two things: the total drag of the rest of the airplane and the speed at which the airplane flies. If the rest of the airplane is high drag, the drag of the landing gear is a small percentage of the whole. Eliminating the drag of the gear by retracting it may not produce a useful increase in speed. Early airplanes had many drag producers other than fixed landing gear, and until these were eliminated, retracting the gear didn’t do much good. A tumbleweed with a retractable gear isn’t a whole lot less draggy than a plain old tumbleweed.

Consider the plot in Figure 1, which shows how much speed a 200-knot fixed-gear airplane will gain if the gear is retracted as a function of the drag area of the rest of the airplane. Each point on the curve was derived by setting a drag area, determining the power required to push that airplane 200 knots, then removing the drag area of the fixed gear and computing a new speed at constant power. Each point represents a different airplane with different horsepower. The important point here is that if the rest of the airplane has a lot of drag, even if you add enough power to push it along fast, retracting the gear doesn’t make it much faster. On the other hand, if the airplane is relatively clean, then pulling up the wheels can gain a lot. 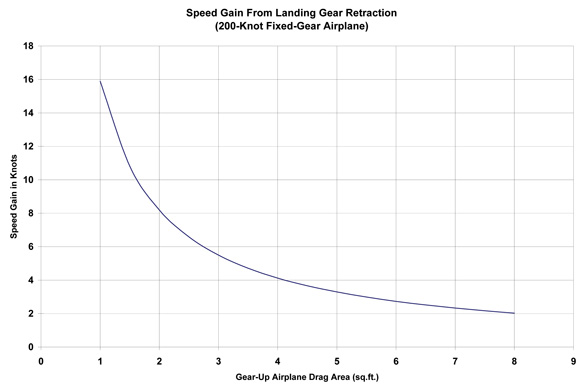 In 1936, when the pessimistic prediction about retractable gear was made, most air forces still flew biplanes such as the Gloster Gladiator, in Britain, or open-cockpit, fixed-gear monoplanes like the American P-26 and the Japanese Nikajima Type 97. These types of airplanes still had a lot of drag producers more significant than the landing gear. Designers first attacked the drag of open cockpits, struts, wires, exposed engine cylinders and similar items. When these sources of extra drag were eliminated, the airplanes were finally clean enough so that the drag of the landing gear became significant. Even so, fixed-gear airplanes remained competitive until speeds got quite high.

In the early part of World War II the British tested a fixed-gear fighter, the Miles M20, which was conceived as a fighter that could be built quickly and in large numbers should it prove impossible to build enough Hurricanes and Spitfires during the Battle of Britain. Its fixed gear was part of an effort to keep it simple and easy to build. Although it was not put into production, the M20 was a relatively good performer for its time. With a maximum speed of 335 mph, it could keep up with a Hurricane, and was actually faster than the Grumman Wildcat (or as the British called it, the Martlet).

A typical tricycle landing gear for a light airplane, if it has no fairings, can account for as much as a third of the parasite drag of the entire airplane. At first, it would seem that retracting such a gear could produce a dramatic reduction in drag. However, this presents an unrealistically optimistic view of the true drag advantage of a retractable gear. A good set of landing gear legs and wheel fairings can reduce the drag of a fixed landing gear by about 80%. A perfect retractable gear can only reduce the drag by the remaining 20% of the original fixed-gear drag. The residual drag of even a good fixed gear is still significant, and worth attacking in some cases. The faster the airplane is, the more can be gained by eliminating parasite drag.

Figure 2 illustrates the speed increase that can be expected for a typical clean, two-place airplane if a well-faired fixed gear is replaced with a good retractable gear. The exact speed increment is configuration dependent, but the information in Figure 2 is representative of what can be achieved. The X axis of the plot is the maximum speed of the airplane with a well-faired fixed gear, and it shows how much speed would be gained if the gear were then retracted. A 100-knot fixed-gear airplane would gain just over 4 knots if the gear were retracted. By the time the fixed-gear airplane has a maximum speed up in the early WW-II-fighter range of about 300 knots (345 mph), the gain increases to about 13 knots. For the designer of the 100-knot light airplane, the 4-knot speed increase offered by retractable gear is probably not worth the effort. By the time we are looking at 300-knot speeds, where the mission is either racing or long cross-country flights, the 13-knot advantage of the retractable is highly desirable. The dilemma for the designer comes when the speed of the airplane lies in the gray zone between these two extremes.

The Benefits of a Clean, Fixed-Gear Design

Historically it seems designers start to believe retractable gear is worthwhile as cruise speeds climb into the 150- to 200-knot range. In this range the speed increase from retracting the gear starts to look worthwhile, but the picture is far from clear. The Grumman Tiger demonstrated how effective a good job of cleaning up a fixed landing gear on an airplane in this speed range could be. With a program of detailed aerodynamic cleanup, including a good job of fairing a fixed landing gear, Grumman was able to offer a 180-hp fixed-gear airplane that would outrun some 200-hp retractables.

In the certified airplane world, the Cirrus SR20 and SR22 are examples of moderately fast airplanes where the designer elected to stick with fixed gear to keep cost and complexity down. The homebuilt Glasair IIS was offered in both fixed-gear and retractable versions. According to my 1991-1992 Janes All the Worlds Aircraft, the maximum speed difference between the fixed-gear Glasair and the retractable with the same engine is 9 knots. This correlates well with the 8.7 knots predicted by Figure 2. 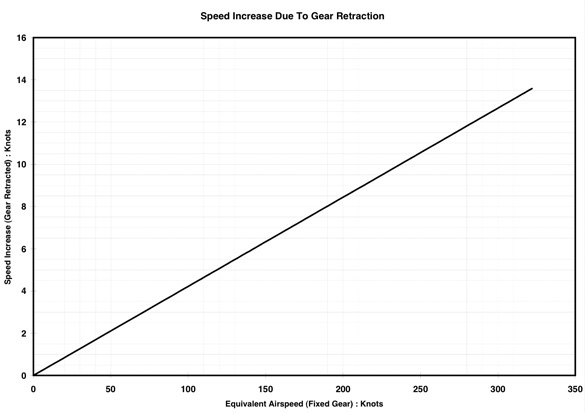 Another factor that may drive the designer toward retractable gear is an operational consideration such as rough fields that make it desirable to use large-diameter wheels. These are higher drag than wheels sized for smooth runways, and will remain higher drag with fairings on them. Wheel fairings usually do not fare well in rough-field operations, so it is likely that a fixed gear will have partial leg fairings at best. If space can be found inside the airplane to stow the wheels, retraction may offer a larger than normal speed increase over a fixed gear.

Sometimes a retractable landing gear is chosen for reasons other than performance. A good example is the Loehle 5151 lightweight P-51-style sport plane. The 5151 is powered by a Rotax 503, and is in no danger of exceeding 100 knots in level flight. The prototype, and early kits, had fixed landing gear with dummy gear doors and painted-on gear wells to simulate a P-51 with its gear extended. Enough customers felt that they wanted their baby P-51s to be able to tuck up their wheels that Loehle was eventually persuaded to offer retractable gear.

Another valid reason to have retractable landing gear on a relatively low-performance airplane is training. If an airplane is going to be used primarily as a trainer to prepare pilots for higher-performance, more complex aircraft, then it is worthwhile to have the systems and procedures of the trainer reflect the high-performance airplane as much as possible. But it is possible to take this concept to ridiculous extremes. The Champion Lancer was a very light twin built as a minimum-cost twin trainer. It had fixed-pitch propellers and fixed landing gear, but it also had dummy propeller controls and landing-gear switch, complete with gear warning horn and gear position indicator lights to allow training of pilots to fly twins with real adjustable-pitch, feathering props and real retractable landing gear. The Lancer gave new meaning to the term low performance and was not a commercial success.

Retracting the landing gear will definitely reduce the drag of the airplane. But whether this drag reduction is worth the cost and complexity of the retractable gear depends greatly on the mission of the airplane and how fast is fast enough.

Scott Spangler - May 6, 2015
0
For over 100 years, this family-owned business has sold everything from pipe organs and PT-19 wings to high-performance parts for homebuilts.