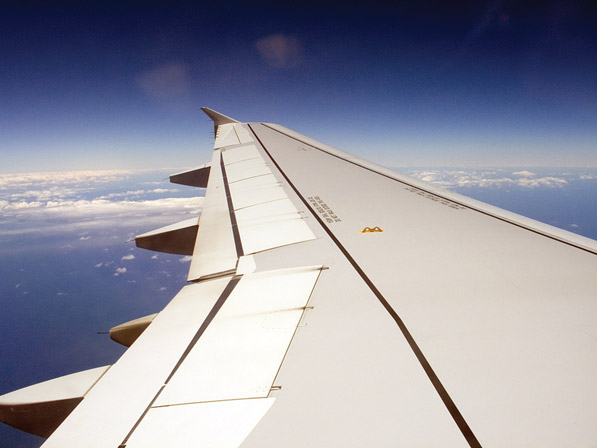 A typical large airliner has significant aeroelasticity. The wingtips move upward noticeably during the takeoff roll before the wheels leave the ground.

In the dynamic case, the airplane (or part of it) is oscillating, usually both bending and twisting. This gives rise to varying aerodynamic forces that can either drive or damp the structural oscillation. If the aeroelastic oscillations become unstable, the results can be catastrophic.

This month we will begin a look at static aeroelastic phenomena.

Perhaps the simplest form of aeroelastic deflection is wing bending. The wing generates the lift that holds the airplane in the air. The lift force is distributed along the span of the wing, while most of the weight it is supporting is concentrated in the fuselage, which is in the center of the wing. Because of this, the lift causes the wing to bend upwards along its length. The more lift that is being generated, the more the wing bends. You can see this effect clearly during the takeoff of an airliner. When the airplane rotates for liftoff, the wingtips rise significantly relative to the fuselage before the wheels leave the ground. In flight, the wings have noticeably more dihedral than they do when the airplane is static on the ground. Another good example is the wing of a high-performance sailplane, which due to its very high aspect ratio, is quite flexible.

Once the airplane is in flight, the wing bends to its 1-G shape, which is the shape the wing deflects to when supporting the weight of the airplane in steady-state, level flight. Any change in the load factor (G loading) changes the amount the wing bends. In a turn or pull-up, where the load factor is greater than 1, the wing will bend more, and if it is unloaded by a push-over or down-gust, it will bend less.

This aeroelastic bending of the wings has multiple effects on the airplane. One potentially beneficial effect is that the flexing of the wing acts somewhat like the springs in an automotive suspension. When the airplane encounters a gust, and the lift of the wing increases, the first effect of the increased lift is to bend the wing. The flexible wing transmits the load increment caused by the gust to the fuselage more gradually than it would with a rigid wing. This reduces the onset rate of the gust loading, softens the ride and can reduce the peak loads experienced by the passengers and items in the fuselage. If the wing is very flexible, wing bending can increase the dihedral sufficiently to slightly reduce the total lift the wing is producing, further reducing the G-onset rate at the fuselage.

In extreme cases this shock absorber phenomenon can cause some issues with cues to the pilot. If the pilot pulls back on the stick to initiate a pull-up, the wing bending will, as we have seen, reduce the onset rate of the commanded G-load at the cockpit. The pilot may interpret this as a lag in the control response of the airplane, and respond by pulling harder just as the initially commanded G finally is felt in the cockpit. This has the potential to lead to pilot induced oscillation (PIO) or overstressing the airplane. Fortunately, this is rare, and its seen only on extreme designs.

Wing bending in flight also affects the lateral/directional characteristics of the aircraft. As the wings bend upwards in response to lift loads, their dihedral increases. This dihedral increase changes the characteristics of the airplane, and has its largest effect on the Dutch Roll mode. The designer must take this into account, and choose the static dihedral angle and fin size to ensure that the airplane has acceptable Dutch Roll damping when flying in its true, deflected shape. This task is complicated somewhat by the fact that the physical dihedral will increase with load factor, so the airplane will have more dihedral when maneuvering than it does when flying straight and level. It is possible that the flight condition that sizes the vertical fin for a relatively flexible airplane will be a maneuvering condition rather than steady, level flight.

If the wing is very flexible, wing bending can move the vertical position of the aerodynamic center far enough or change the vertical position of wing-mounted control surfaces or masses enough to affect the longitudinal characteristics of the airplane. This is rare, because few airplanes are flexible enough for the longitudinal effects of wing bending to be significant. But it is not unheard of.

The destruction of the Helios ultra-high-altitude flying wing UAV was caused in part by longitudinal effects of wing bending. During a test flight, Helios encountered turbulence that caused the wing to go into what the accident report called an unexpected persistent high wing dihedral configuration. The airplane was longitudinally unstable in this configuration, and began a series of pitch oscillations that led to it eventually exceeding its maximum allowable airspeed and breaking up.

Flexibility of the wing can also sometimes cause issues when the plane is parked. A few airplanes such as the B-52 and B-47 have auxiliary or outrigger landing gear to stabilize them and support large, flexible wings when the airplane is on the ground.

The most well-known such incident was the takeoff of the Voyager on its around-the-world flight. Before the takeoff, there was considerable concern about the dangers of the heavily loaded airplane lifting off prematurely. To prevent this, the landing gear was adjusted to place the airplane slightly nose-down so that it would require a positive nose-up control input from pilot Dick Rutan to lift off. During the takeoff roll, the nose-down attitude caused the wings, which were heavily loaded with fuel and drooping significantly under the weight, to develop negative lift that flexed the wingtips down so far that they dragged on the runway. Fortunately, though the damage to the tips caused the airplane to lose both winglets, it was still able to complete the flight successfully.

In-flight wing bending can affect the function, and hence design, of airplane subsystems that are in or on the wings. The design of control surfaces and fuel systems requires particular attention to the geometric effects of wing bending.

If the wing is flexible enough to change its dihedral significantly in flight, then the position of fuel in tanks inside the wing will be a function of the wing deflection. On the ground, the wing will droop under the weight of the fuel, and the fuel will tend to pool toward the wingtips. If the fuel-tank vents are near the tips, then this droop can cause fuel to leak out of the vents. One solution to this that has appeared on several airplanes is to incorporate small winglets, which are tall enough so that the tip of the winglet is above the top of the fuel tanks when the wing is in its most drooped condition. The fuel vent line runs out the top of the winglet, ensuring that the vent opening remains above the level of the fuel, thus preventing leakage.

The movement of the fuel due to wing bending may also cause problems with the location of the fuel-line pickup. In flight, with the wings bent upwards, the fuel moves inboard, and it will pool in the inboard part of the tanks when the tanks are partially full. This suggests that the proper place for the fuel line to pick up fuel is inboard. On the ground, wing droop can cause the fuel to move outboard, which introduces the danger that an inboard fuel pickup may unport and suck air on the ground into the partially filled tanks. The design of the fuel system must take both of these situations into account.

The control linkages that actuate the ailerons can be significantly affected by wing bending. On typical systems, the stick is connected to the ailerons either by cables or by push-pull tubes. Both cables and push-pull linkages run in straight lines between bell cranks or pulleys. When the wing bends, the path of the control linkage changes. This can cause cables to over tighten or go slack, and may cause push-pull tubes to bind against the structure or generate unwanted control inputs. Linkages running spanwise in flexible wings must be designed with this in mind. On cable systems, additional pulleys or fairleads may be needed to control the effects of bending on the cables. On push-pull systems, it may be necessary to break the control run into several segments with idlers between them.

Control-surface binding may also become an issue. In order for an aileron to move freely about its hinges, the hinge pins must be parallel to each other. If the aileron is mounted on a piano hinge, the hinge must be straight. If the wing bends enough to bend the aileron and significantly misalign the aileron hinges, the aileron will bind. There are several solutions to this problem. The two most common are to use floating hinges, where the hinge pin goes through a ball like the ball used on a rod end, which can change its orientation as the wing bends to relieve the binding. A second approach that is more appropriate for long, flexible wings is to use several relatively short-span ailerons in series along the wingspan. Each individual aileron is short enough that it will not bend enough to bind. This is an effective way of preventing control binding, but it does make the aileron control linkages more complex.

Bending of the wing is the simplest aeroelastic phenomenon a designer must consider. Next month we will continue our look at aeroelasticity when we consider what happens when air loads twist components of the airplane.