In the past few months, we’ve taken a look at the various ways in which interactions between aerodynamics and structures can cause aircraft structures to oscillate or flutter. This month we continue that discussion with a look at a mode that is of significance primarily in the light-airplane world: fabric flutter.

Unlike metal or composite, fabric has very little stiffness. It is held in shape by the structure supporting it (wingribs and spars) and by tension. If the fabric is properly tight, and there are sufficient supports, it provides a light, stable surface for the air to flow over. But even stable, properly shrunk fabric will distort under air loads, because the loads are resisted by tension in the fabric. The air loads act approximately normal to the fabric, so the fabric must distort either in or out to change tension enough to resist the load.

These changes in pressure tend to amplify the curvature of the fabric. In outward bulges, the low pressure pulls the fabric out farther, and on inward dents the high pressure pushes the fabric in more. This is an unstable phenomenon. The distortion caused by the air pressure changes the shape in a way that increases the pressure change, which in turn increases the distortion. The increasing distortion is resisted by fabric tension and the ribs. If the fabric is tight enough, and well enough restrained, then the air pressure will cause some bulging of the fabric, but the new, distorted shape will be stable. This is the case on most fabric-covered aircraft surfaces.

The tension required to stabilize the fabric comes from a combination of two sources. The first is the built-in tension created when the fabric is put on the wing and properly shrunk. The second is air pressure. If there is a significant, consistent pressure difference across the fabric, the air loads themselves will tighten the fabric enough to stabilize it. A good example of this is the behavior of boat sails. When a sail is properly sheeted and filled with wind, it is taut and stable. If the sheet is released, and the sail is allowed to stream with the wind, the pressure difference across the sail disappears, and along with it, the tension in the sail fabric. The sail will then flap in the wind.

The aerodynamic mechanism of this flapping is called Kelvin Helmholtz Instability. It is caused by the effect of surface curvature on air pressure. The illustration shows what will happen if a ripple forms in a fabric surface in an airflow. The pressure on the beginning of the ripple, which is concave, increases, driving the fabric down. The pressure on the concave top of the ripple drops, pulling the fabric up. The ripple will grow unless it is stopped by fabric tension or structure.

This instability can have different results depending on the details of the configuration of the fabric and structure. If the fabric is unrestrained, as is the case for a flag or a loose sail, the waves will move downstream and grow as they do so. This causes the flapping we are used to seeing with flags in a strong wind. 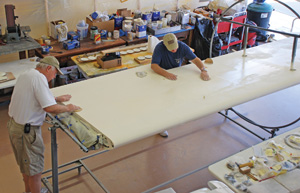 On rare occasions, the ripples will grow up to a point and then stabilize, forming a set of standing waves in the fabric. One example of this appeared on the British R-100 airship. The R-100 was 719 feet long, and with a top speed of 80 mph it was the fastest airship built up to that time. The ship had fewer longitudinal girders than previous practice to save weight. This meant the outer fabric cover had less support. When the ship was flown near its top speed, standing waves appeared in the fabric between the longitudinal members.

It is also possible for the fabric to oscillate if the ripples grow enough to cause local flow separation. In such a case, a blister or bubble in the fabric will grow until it stalls, and then snap back as the low pressure disappears after the stall.

Fabric flutter can become a problem on aircraft if the fabric becomes unstable, or if the oscillations of the fabric couple with a natural vibration mode of another portion of the aircraft structure. This is usually caused by the fabric partially detaching from the structure intended to support and restrain it. One example of this was the accident that claimed the life of aviation legend Steve Wittman. His O&O Special broke up in flight due to a flutter caused by the partial disbanding of the wings fabric. The NTSB report on this accident (NTSB Identification: ATL95FA092) is available at the NTSB web site. The report lists the probable cause of the accident as aileron-wing flutter induced by separation at the trailing edge of an unbonded portion of wing fabric at an aileron wing station. In this case, the fabric became unbonded from the structure and began to oscillate. The oscillations in the fabric and the attendant disturbance of the airflow over the ailerons excited an aileron flutter that led to structural failure of the wing.