Flutter is a sustained or increasing oscillation of the airplane’s structure that is driven by aerodynamic forces. In severe cases, the flutter oscillation does not reach a limiting steady-state amplitude, but grows rapidly once the oscillation begins. This situation is extremely dangerous and can cause catastrophic structural failure of the airframe. 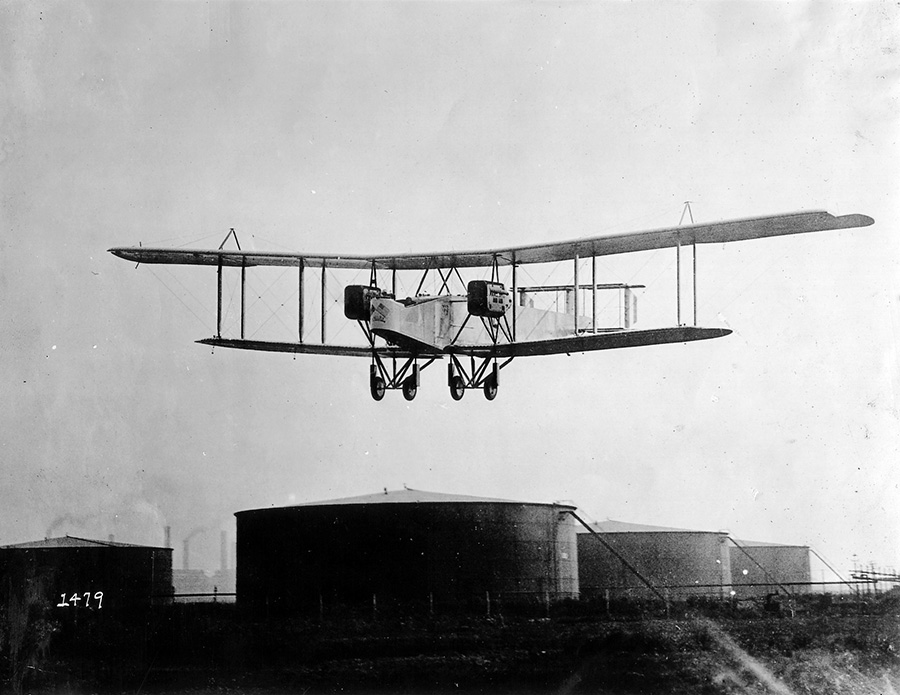 Engineers first began to understand flutter during WW-I when they investigated violent oscillations of the tail and aft fuselage of the British Handley Page O/400 bomber.

In previous articles, we explored some of the basics of flutter and took a look at one of the more common flutter modes: wing/aileron flutter. This month, we direct our attention farther aft and look at the aeroelastics of tail surfaces.

There are several ways that aerodynamic forces can cause vibrations and oscillations of tail surfaces. The first of these is not truly flutter, since it is driven by unsteady airflow independently of any distortion or deflection of the tail surface.

Buffet: It is not uncommon to see any aerodynamically driven oscillation of tail surfaces described as “tail flutter.” In fact, there are two distinctly different types of tail oscillation.

Under certain circumstances, unsteady airflow over the tail can cause unsteady or oscillating forces that cause the tail to shake. The source of the unsteady airflow can be components of the airplane that are upstream of the tail, or flow separation on the tail itself. A very common source of such tail shake is the separated wake downstream of the wing as it begins to stall, particularly on low wing airplanes.

Tail shaking caused by unsteady airflow is called buffet. It is not a result of aeroelastic instability of the tail and is not true flutter. Buffeting is undesirable if it is a steady-state situation in a normal flight mode such as climb or cruise.

On the other hand, buffet that generates a clearly felt aerodynamic warning to the pilot of an incipient stall is a good thing, as long as it is not severe enough to endanger the structural integrity of the tail.

While the buffet itself is not tail flutter because it arises purely from the effect of unsteady airflow, it can sometimes set off flutter by exciting an unstable aeroelastic mode of the tail.

Tail Flutter: Flutter involves the interaction between two or more structural modes and the airstream. For the wing, the primary structural modes of concern are wing bending, wing torsion (twisting), and the rotation of control surfaces around their hinges. All of these modes are also important for tail surfaces, but because the tail is mounted on the end of the tail cone, bending and torsion of the fuselage also come into play. While tails can exhibit flutter modes that look similar to wing bending/torsion flutter or wing/aileron flutter, modes involving either bending or twisting of the fuselage are also important.

Because of this, there is a flutter mode in which the natural torsional oscillation frequency of the fuselage couples with the natural frequency of the rudder rotation about the hinge line. As the fuselage twists, it causes the fin to roll about its root. The lateral acceleration of the fin causes the rudder to lag, generating side force that drives the roll. As the torsional stiffness of the fuselage arrests the roll and starts to drive it the other way, the rudder overshoots and lags again, and the cycle repeats.

Anti-symmetric elevator mode: Engineers’ understanding of flutter as a coupling between structural oscillation modes began in WW-I with an investigation into violent oscillations of the tail and aft fuselage of the British Handley Page O/400 bomber. In his report prepared for the British Advisory Committee for Aeronautics (Reports and Memoranda No. 276, Torsional Vibration of the Tail of an Aeroplane, July 1916), F.W. Lancester described it thus:

“At certain critical speeds of flight a tail wobble is set up, involving heavy torsional stresses on the fuselage, the type of vibration being an angular oscillation approximately about the axis of the fuselage.”

The O/400 fuselage structure was a fabric-covered wooden truss and was quite limber in torsion. The tail rolled over +/-15 degrees during the oscillation.

In classic British fashion, Lancester reports: “I gather that the experience of the pilots when this vibration is at its worst is terrifying.”

On the O/400, the left and right elevators were independently connected to the cockpit control column by cables and were not directly interconnected at the tail. This setup provided control redundancy in the event of a cable failure, but the left-to-right elevator connection was very soft, since the only thing keeping them in formation were the control cables that stretched all the way up to the cockpit. This interconnect acted like a very soft spring and allowed the elevators to “flap” independently when the fuselage twisted. Since flutter was not understood at the time, the elevators on the O/400 were not mass balanced.

The flutter mode happened when the elevators lagged the fuselage twisting. They acted much like the rudder described in the example above. One elevator went up and the other down as the fuselage twisted, generating a rolling moment that drove the oscillation. The critical structural degree of freedom causing this flutter was the ability of the elevators to move up and down independently of each other. The solution was to connect the left and right elevators with a stiff torque tube. With this torque tube in place, the inertial forces trying to drive one elevator up and the other down resisted each other, and the net motion of the elevators in response to fuselage torsion was eliminated.

V-tails: On a V-tailed airplane, the situation is very similar to that of the elevators of the HP O/400 described above. The ruddervators of a V-tail must move symmetrically for pitch control and anti-symmetrically (one up and one down) for yaw control. Accordingly, the control surfaces of a V tail are essentially independent, since the only constraint keeping them from moving relative to each other is the pilot’s hands and feet on the controls in the cockpit. Because the surfaces must move independently to control both pitch and yaw, the option of a strong interconnect like that used on elevators is not available. 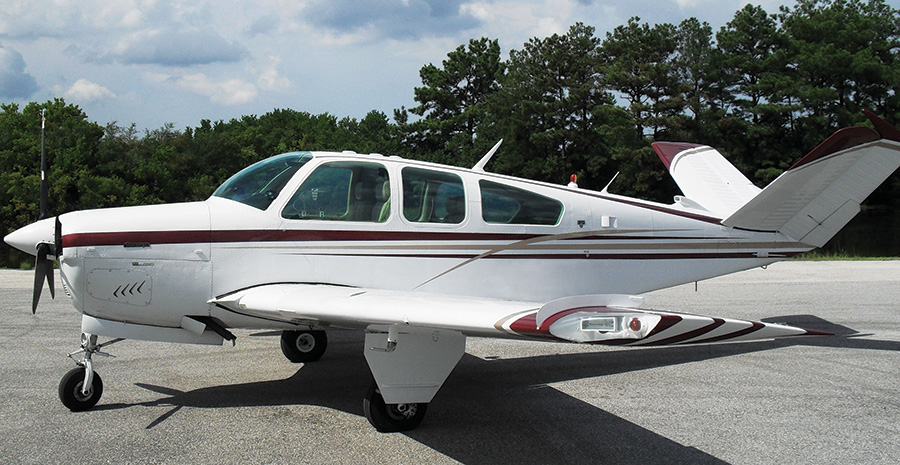 Some V-tailed Bonanzas experienced flutter after thick, heavy coats of paint were applied to the ruddervators during repainting.

Although torsionally stiffening the fuselage during the design phase can help reduce the chance of fuselage torsion related flutter modes, the primary defense against flutter for both rudders and V-tails, is proper mass balancing.

Because the chord of the control surfaces on a tail is much longer than that of a typical aileron, the amount of mass balance required to protect against flutter is larger. Tail surfaces are also very sensitive to mass behind the hinge line and the position of the center of gravity of the control surface. This sensitivity was illustrated by a series of flutter incidents on V-tailed Bonanzas, which experienced tail flutter at airspeeds well below the published VNE (redline) speed of the airframe. In several of these incidents, the airplanes landed safely because the pilots reacted to the vibrations by slowing down and applying control pressure, which stopped the flutter. Once on the ground, they discovered that the flutter had done extensive damage to both the tails and aft fuselage structures. These incidents are described in NTSB Safety recommendation A-93-42, which describes the damage to one airplane thus:

“The entire empennage was loose and the fuselage, particularly the right side forward of the stabilizers, was buckled from top to bottom and torn.”

It’s frightening to note that in at least one of these incidents, the pilot felt the flutter as “a mild vibration” and put the airplane away after a safe landing without inspecting it for damage. It was only after being told in conversation that he had probably had a tail flutter that he inspected the airplane, and found extensive damage to the tail.

The cause of these flutter incidents was changes in the mass properties of the ruddervators caused by repainting of the control surfaces. On some airplanes, the new paint was applied in thicker, heavier coats than the factory paint and on at least one, the tail had been painted with the control surfaces still mounted on the airplane. This trailing-edge-down position causes some paint to run towards the trailing edge.

The important point here is that the aeroelastic stability of the tails was so sensitive to aft movement of the CG of the control surfaces that improper re-painting could cause a potentially catastrophic, highly destructive flutter.