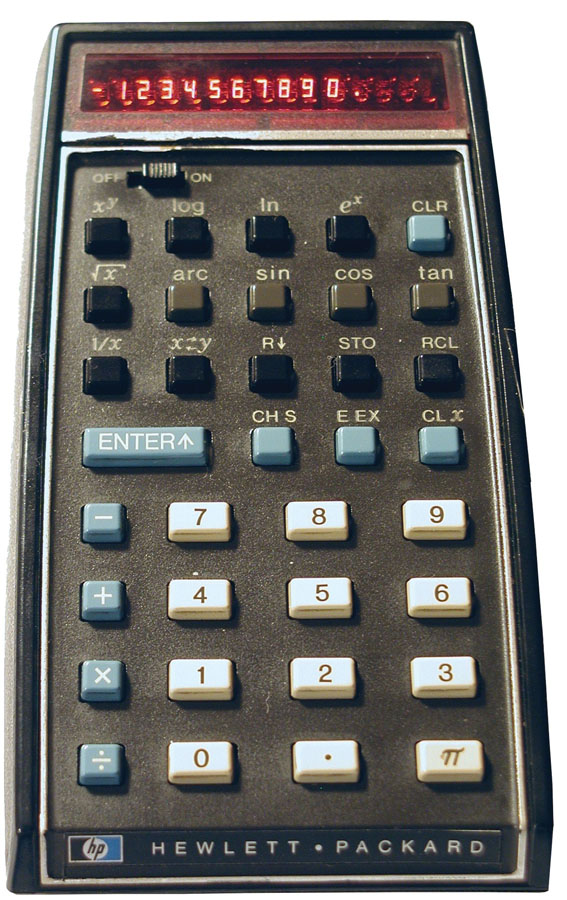 The original scientific calculator, the Hewlett-Packard HP-35. In its day it was an engineering marvel but very expensive. (Photo: Hweihe [CC BY-SA 3.0] http://creativecommons. org/licenses/by-sa/3.0/)

Working with this newfangled electrical stuff in 1907, a fellow by the name of H.J. Round in the Marconi Labs in Britain noticed that passing a current through a chunk of silicon carbide (SiC) made the crystal glow. Interesting, he said, and filed his notes on a dusty shelf. Twenty years later in 1926, a Russian fellow named Losev found the same glow from SiC and published his discovery in several magazines. Ten years later, a French fellow working in the lab with Madame Curie and her radium glow experiments did the same glow experiments with zinc sulfide (ZnS) and got a much improved glow. Ms. Curie, unfortunately, died of radium radiation poisoning before this new ZnS crystal could be thoroughly investigated. 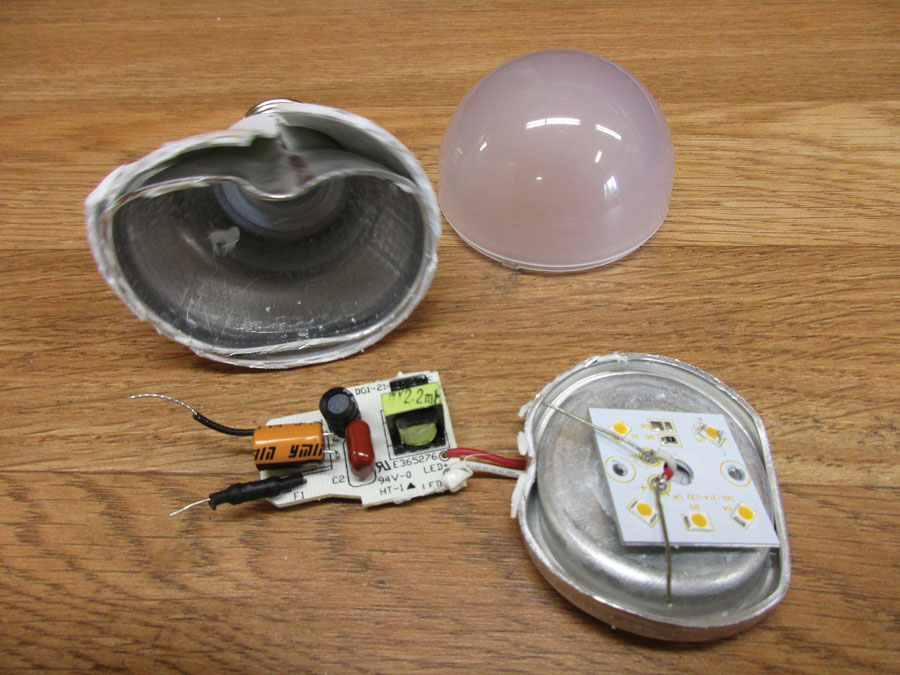 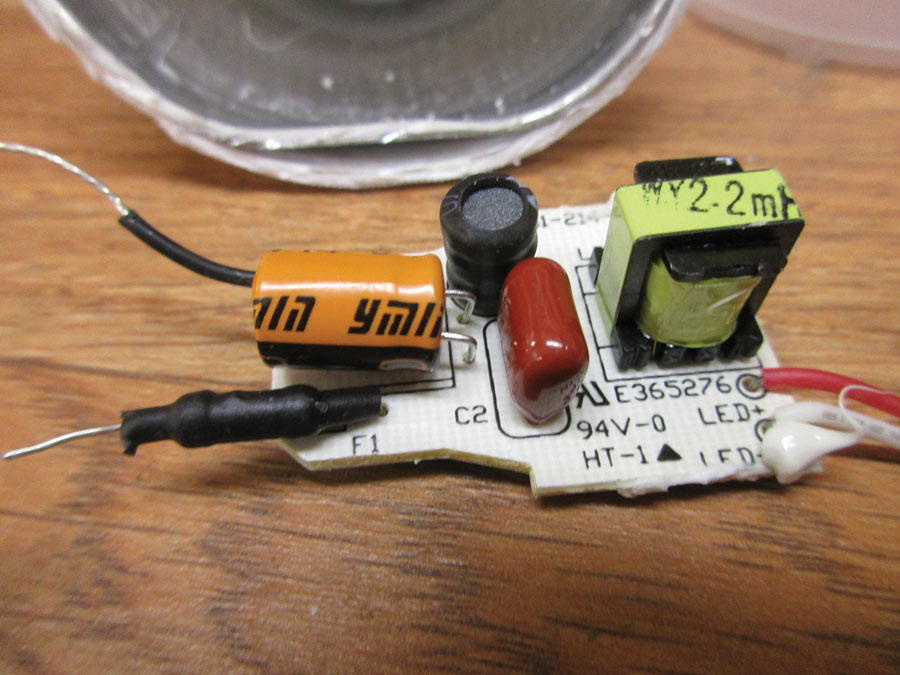 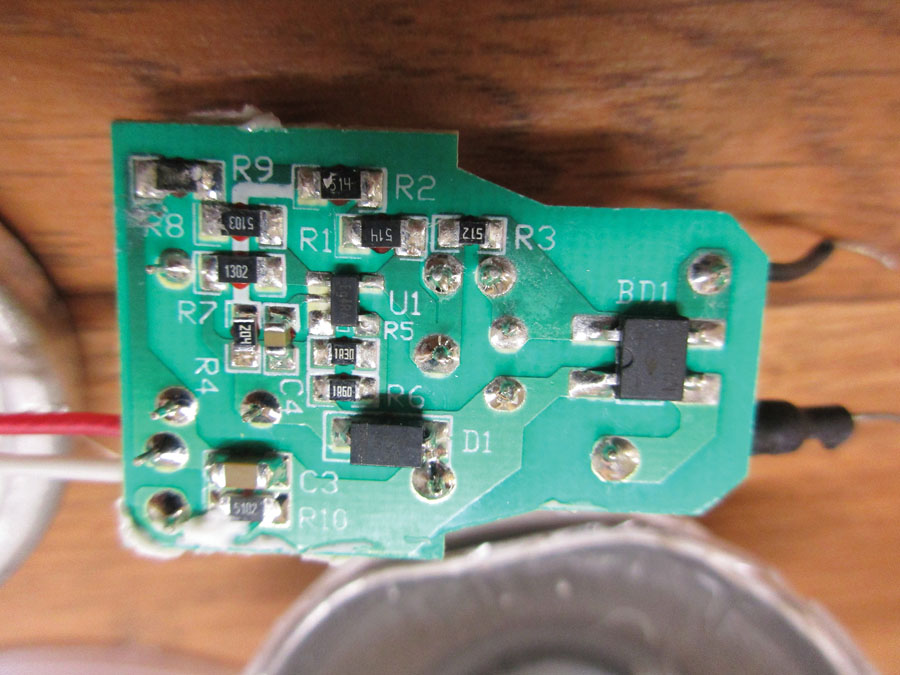 PC board bottom: 10 resistors, four capacitors, one diode, one integrated circuit, and one bridge rectifier.

It wasn’t until 1962 that researchers in the General Electric labs tossed a little aluminum into a gallium arsenide diode (AlGaAs) to produce a bright red light that they christened a light emitting diode (LED), and the chase was on. Quickly folks all over the scientific world were experimenting with gallium, arsenic, phosphorus, indium, nitrogen, selenium, zinc, carbon, and even our old friend silicon carbide to produce all the colors of the rainbow. 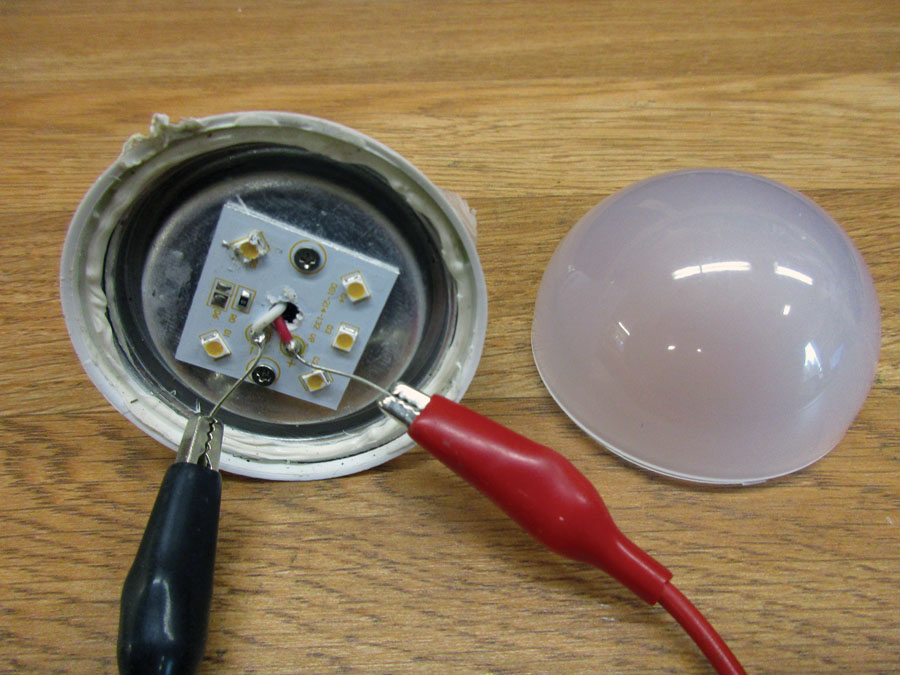 The LED light bulb with the dome cracked off and the lights unlit. 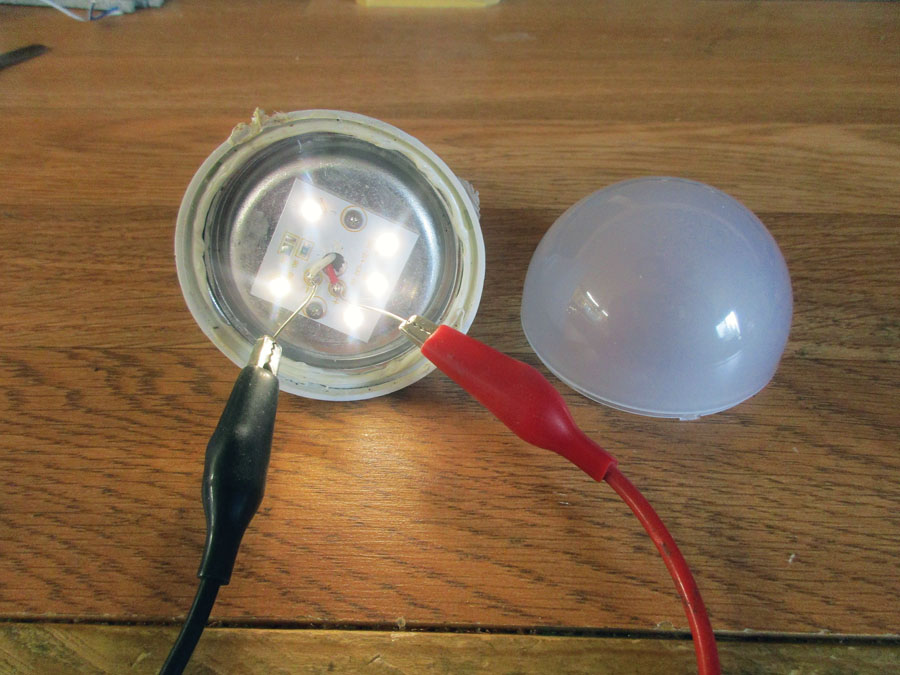 The lights at about 1% brightness.

Regrettably, the rainbow does not contain white light. Since color TV technology was just becoming mature, the use of red, green, and blue light to produce white was an interesting set of experiments, but the light produced was both expensive and sort of off-white. It remained for scientists in Japan to realize that common fluorescent bulbs were really blue mercury vapor lights with a yellow phosphor coating over the inside of the fluorescent tube. Bingo. Coat a blue LED with yellow phosphor and you get white light. (These scientists were awarded the Nobel Prize in Physics in 2014 for their discovery of the blue and white LEDs.) 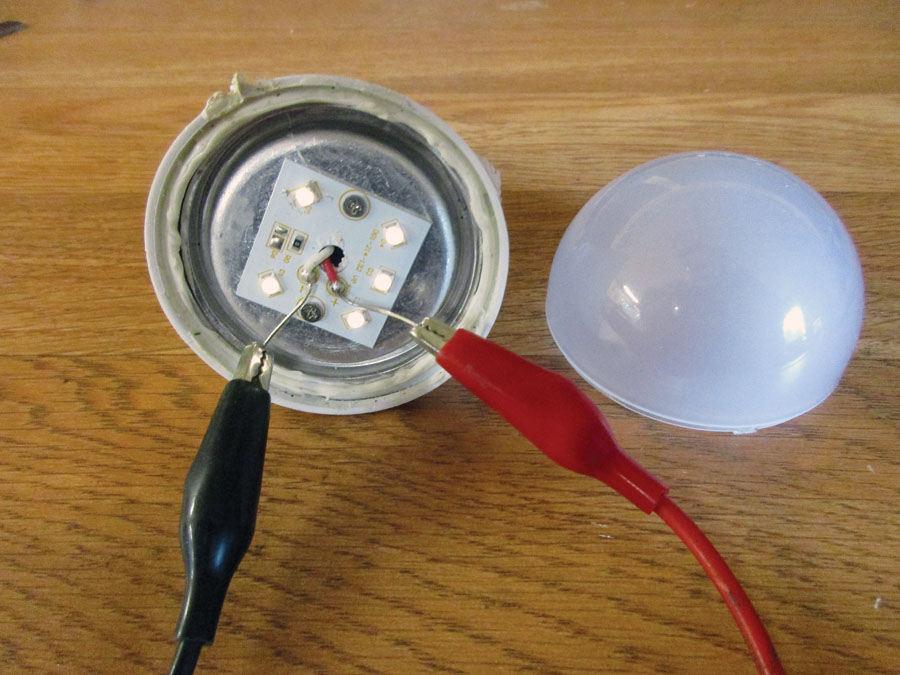 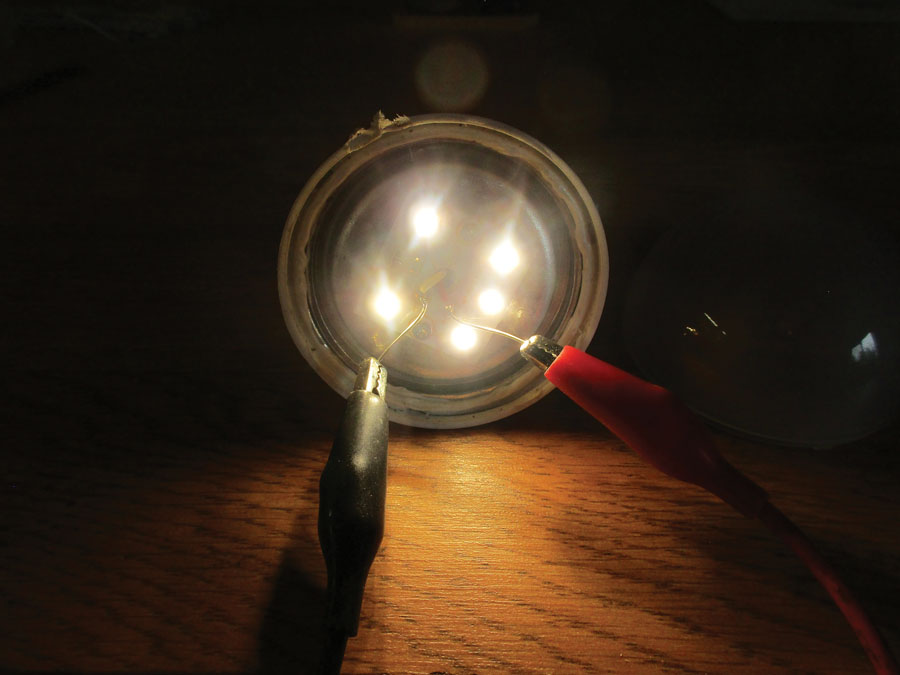 Bulb at about 5% of brightness.

Here is an interesting phenomenon: In the 1960s, one of the founders of Intel said that semiconductors (transistors, integrated circuits, etc.) would double in speed and reduce size and cost half as much every 24 to 36 months. Here we are some 60 years later, and “Moore’s Law” for semiconductors has held to this day. The same has been true for LEDs. Light output doubles and cost is halved every 24 to 36 months since that experiment in the GE labs in 1962.

Just as a check on how this progress has taken place, consider the very first pocket-sized “scientific calculator” with little LED digits to come on the market—the venerable HP-35. $395 in 1970 dollars, or about $2 grand in 2019 dollars. That was about half a month’s salary for a newly minted engineer that caused much domestic stress when I told my wife that I had spent the monthly mortgage money on an “engineering toy.” Today that same type of engineering calculator is sold in Wallymart for less than $8. Just as a side note, that HP calculator had an error in the 10th decimal place of one digit, and HP recalled each and every one of them to replace the brains to fix the error. That was what quality control was like in the 1970s. And the color of the case changed in the HP-35A because Dave Packard’s wife didn’t like the original 35’s color. 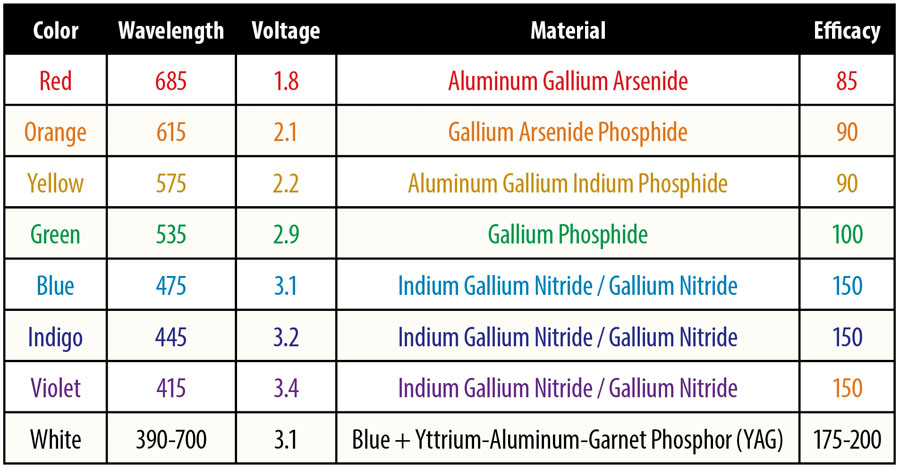 LED color is the standard eye-perceived color. Wavelength is the center of the color band in nanometers (nm). Voltage is the nominal forward voltage of the diode at the recommended forward current. Material is the most common chemical compound for each color. Efficacy is the amount of lumens emitted per watt consumed.

Here is an example of current brightness/cost. About 30 years ago (1990), a 100-milliwatt white LED cost something on the order of $100. I bought a white 750-lumen bulb from Home Depot on sale for 79 cents, cracked it open, and found it contains five of these 3-watt LEDs. That’s less than 20 cents apiece for the lights, and if you factor in the cost of the bulb housing, the electronics, and all the rest of it, I’d be surprised if the cost of the LEDs is more than a dime each.

I think it is fairly reasonable to say that LED lighting is going to be with us for a while, so we might just want to have a chart of LED colors, what their forward voltage is, what they are made of, and their approximate efficiency. 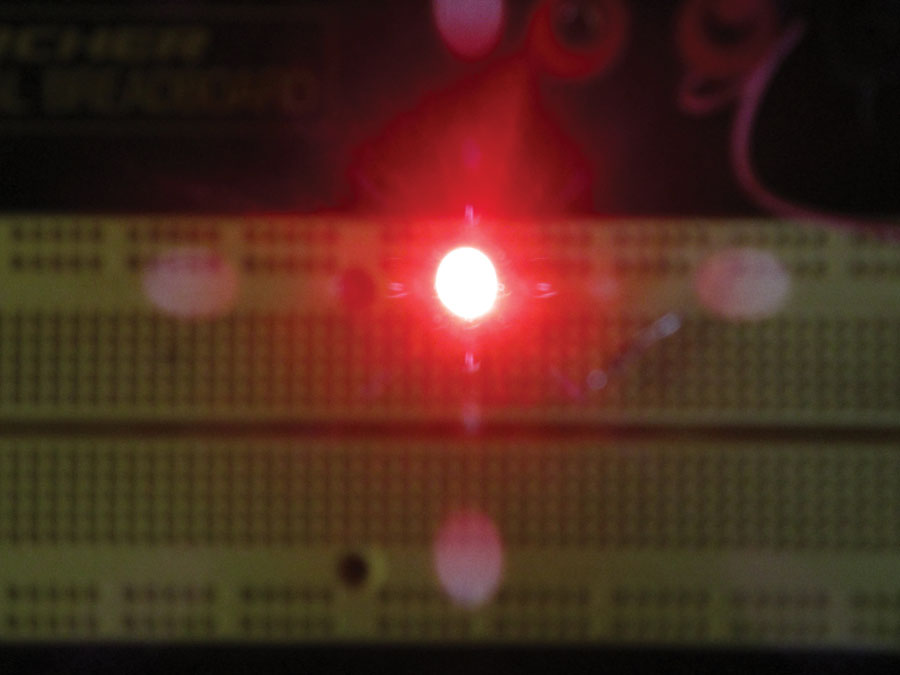 Red LED at about 10% of normal brightness (full brightness wiped out the camera’s ability to focus and compensate). 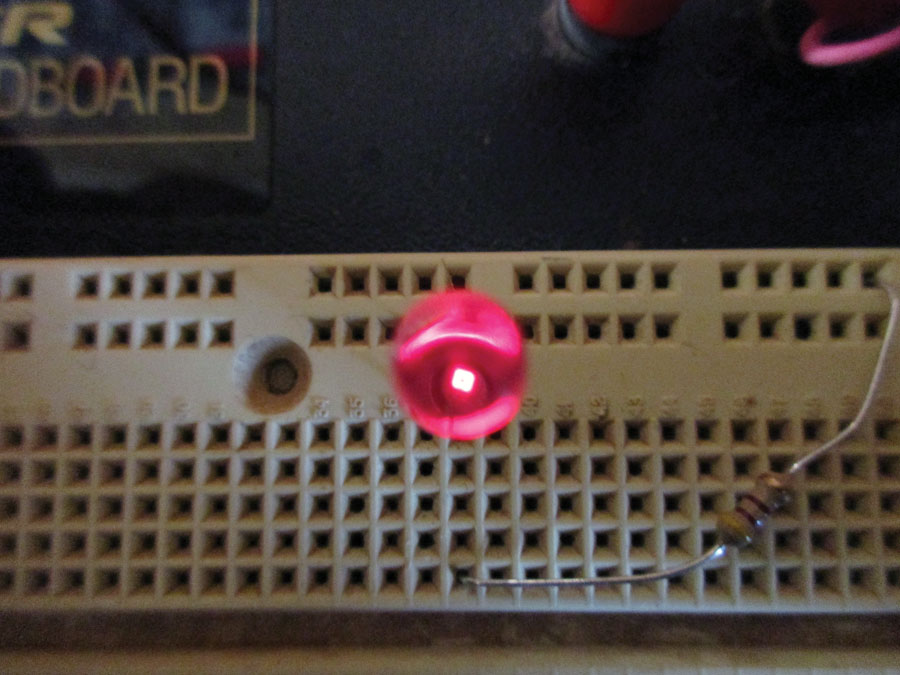 The tiny diode chip itself, way down at the bottom of the LED package. 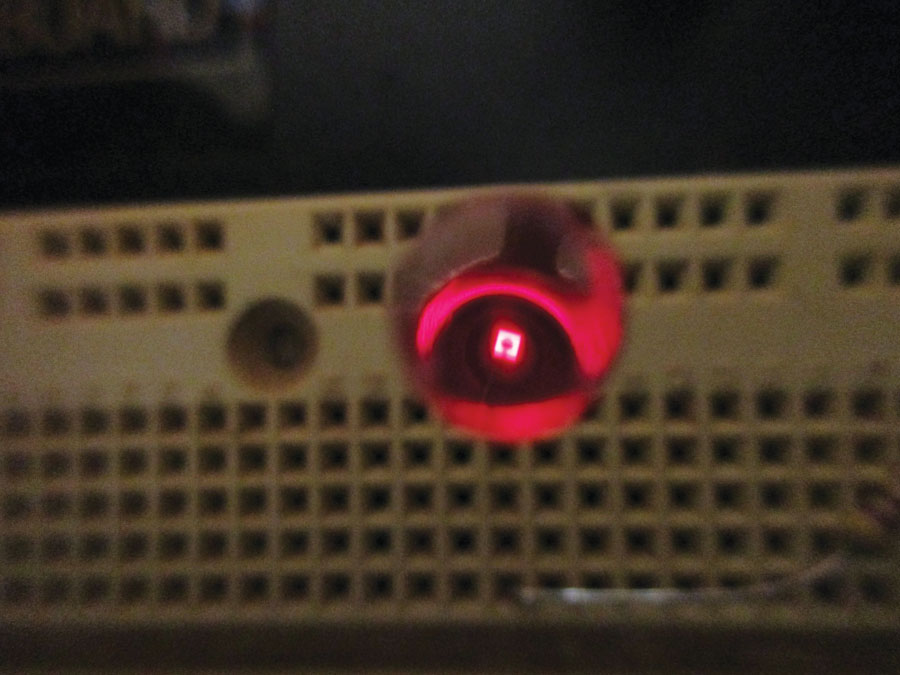 With the camera’s f-stop shut down, you can actually see the shadow of the tiny wire connected to the top (cathode) of the diode. The chip is about the size of a grain of rice cut into 20 pieces.

In the table, color is the standard eye-perceived color. Wavelength is the center of this color band in nanometers (nm). Voltage is the nominal forward voltage of the diode at the recommended forward current. Material is the most common chemical compound for each color. Efficacy is the amount of lumens emitted per watt consumed.

A common way of remembering how the diode voltage is related to color is by remembering the name of a fellow named Roy G. Biv. (red, orange, yellow, green, blue, indigo, violet). Strangely enough, this is also the same progression in the relative energy contained in a lumen of the particular color. You may also note that these are the progressive colors of a rainbow.

Let me present a short treatise on this “forward voltage” that we talk about so that in coming months we can see how to do a proper design and how we can control the brightness of the lamps quite easily.

As you can see from the chart, each diode has a nominal forward voltage drop of somewhere between 1.8 volts for red to 3.4 volts for violet. What most folks don’t understand is that (for example) while the forward voltage for our common red LED is 1.8 volts, at 1.7 volts the light is completely off, and if we try to run it just a tenth of a volt over at 1.9 volts, it will get really bright for about half a second and then give up all its holy smoke in one last tortured puff.

Our job in the months to come is to figure out how to give the LED the voltage and current it needs for operation without stressing it to destruction. See you next month…and until then…Stay tuned…

Going Glass in a Glasair

Gary Jones - April 21, 2013
0
Lessons learned while installing a Dynon SkyView system in a Glasair Super II apply to all types of experimentals. By Gary Jones.