The idea of an airplane that can take off and land vertically, and cruise with the efficiency of a conventional airplane is attractive. Many attempts have been made to produce a machine that realizes this dream, but success has often proven elusive.

Last month, we began to look at the challenges this seemingly simple idea poses for the designer. We saw that just to produce enough vertical thrust to get the machine off the ground takes a lot more power than a conventional airplane requires to take off and climb away. This means that the designer is already faced with the problems of an oversized engine and its effect on weight, cost, and fuel consumption. And once the vehicle has enough power to lift off, and a way of directing the thrust vertically, the challenge has only begun.

We now need to address the knotty problems of safety and control. These are intimately linked in any airplane, and even more so on a VTOL design. It’s a difficult design problem, and it’s not a surprise that VTOL aircraft have a higher accident rate than conventional ones.

The biggest problem facing any VTOL design is how to keep the occupants safe in the event of an engine failure while the machine is in thrust-borne flight. The lift that keeps a conventional airplane aloft comes from the wing interacting with the air flowing over it. If the engine fails, a fixed-wing airplane can glide down to a safe landing if it has only one engine, and (usually) maintain level flight and get to a runway to land if it is a multi-engine machine.

On a VTOL machine, the lift is produced directly by the propulsion system. If it fails, the lift goes away. As we saw last month, a primary reason that helicopters are the only VTOL machines in regular use is that the large rotor disk keeps the power required to hover down to a reasonable level. The second advantage of a helicopter is that it can autorotate. If the engine fails, the pilot can de-pitch the rotor blades so that they are kept rotating by the airstream. This maintains lift and allows the helicopter to glide (steeply) and land safely using the kinetic energy of the spinning rotor to allow the pilot to briefly add pitch to the rotor to check the descent just before touch down.

Higher disk loading VTOL aircraft, including tilt-prop, tilt-rotor, lift-fan, and direct jet lift designs all have the same problem: They don’t autorotate. Accordingly, if an engine fails, its lift goes away immediately. If the aircraft has only one engine, it will fall. Unless it is at very high altitude when this happens, it will not be able to get enough airspeed on the way down for the wing to take over the task of keeping the airplane flying before impact. This places severe demands on the design of the system. Either the machine must incorporate some system to save the occupants (ejection seats or a full-vehicle recovery system) in the event of an engine failure, or it must be operated in such a way that it is never hovering at an altitude high enough to hurt the people aboard if the airplane falls down due to a failure. This is theoretically possible, if we limit hover altitude to a few feet, and then accelerate in ground effect to a high enough airspeed to fly away. Unfortunately, this kind of operating limitation also negates most of the advantages of VTOL. 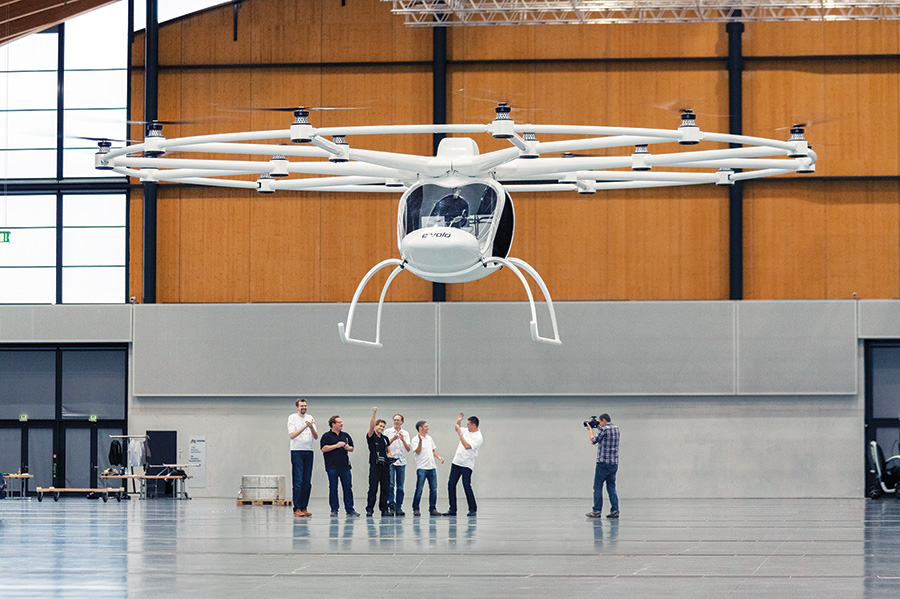 Another approach is to use multiple engines. While this eliminates the problem of total loss of thrust (lift) from a single engine failure, it introduces other issues.

The first is the same problem faced by any multi-engine airplane. The engines must be powerful enough so that the surviving engine(s) can keep the airplane flying with one engine inoperative. It’s an even bigger problem for a VTOL aircraft because the engines must be sized to produce a lot more thrust than the engines of a conventional airplane.

An even more important issue is that the thrust must be centered at the CG in hover and slow thrust-borne flight. If the airplane has more than one engine, it must be able to drive all of its thrust producing elements (props, fans, rotors, etc.) with the surviving engine(s) in the event of a failure. If we allow one prop or rotor to stop while the others keep producing thrust, the airplane will pitch or roll uncontrollably depending on the location of the failed thrust producer.

This forces the machine to have a complex transmission, with cross-shafts linking the rotors, props, or fans, and clutches to allow the failed engine to be disconnected so it does not drag the rest of the system to a halt. On a tilt-rotor such as the V-22 Osprey, there are drive shafts running the full length of the wing, from one nacelle to the other to make sure that both rotors can be powered by either engine. Needless to say, the transmission system for this is heavy, complicated, and expensive.

One possible solution to the “one engine inoperative” problem is to use so many engines that the surviving engines can compensate briefly for the failed engine without resorting to cross shafting or other interconnects between engines and propulsors. One example of this approach was the Dornier Do-31 VTOL jet transport. The Do-31 had a total of 10 engines. One Rolls-Royce Pegasus engine (the same engine as the Harrier) was mounted in a pod under each wing. The Pegasus nozzles swivelled, so these engines were used for cruise thrust with the nozzles directed aft, and vertical lift with the nozzles aimed down. At each wingtip, there was a large pod holding four vertically oriented lift engines. Doors on top and bottom opened to deploy the lift engines for vertical flight. In hover, there were five engines on each side of the airplane making vertical thrust. If one failed, the other four could produce enough thrust to compensate for the failed engine, making it possible to land safely.

More recently, the idea of using multiple electric motors driving propellers or rotors for vertical flight has gotten some interest. The idea is that with enough small lift motors distributed over the vehicle, no single motor would be critical, and they could all be controlled by varying the power fed to each one, without the need for mechanical controls of fuel systems for each engine. Recently, a company named e-volo first flew a prototype of a vehicle using 18 electric motors and propellers to take off and hover like a helicopter. They call their concept a Volocopter.

Yet another approach to multi-engine VTOL safety is the rather direct method adopted by the Russians on the Yak 36 Forger. The Forger had two engines: a main engine that provided thrust in cruise, and a lift engine mounted vertically just behind the cockpit. For vertical flight, the nozzle of the cruise engine pivoted 90 degrees to direct the thrust down, and doors opened to expose the inlet and exhaust of the forward-mounted lift engine. Both engines were needed for vertical flight. If either one failed the airplane would pitch uncontrollably and crash. The Russians did not try to interconnect the engines. Instead they developed an ejection seat that automatically ejected the pilot if the airplane went out of control in VTOL mode. I have read that the system worked quite well, and the only fatality in the Forger due to engine failure in vertical flight was a pilot who disabled the auto-eject mode on his seat because he didn’t trust it. Unfortunately for him, it was not active when the lift engine of his Forger failed shortly after takeoff, and he was not able to manually eject.