This month’s discussion is the third part of my response to a question from a reader asking why nobody has managed to produce a simple and safe design for VTOL. We have already discussed the areas of power and thrust, and basic safety considerations for VTOL. These alone should be enough to show that the “simple and safe” vision may not be realizable in the real world.

Once we have enough thrust to take off and hover, and have ensured some minimally acceptable level of safety, we still need to find a way to keep our VTOL airplane under control over its entire flight envelope.

1) Thrust-borne flight: When hovering, lifting off or landing vertically, or flying very slowly, the vehicle is held up primarily by the thrust of its vertical propulsion system. The aerodynamic forces on the machine are relatively low and the forces generated by the engines are high.

2) Transitional or mixed-mode flight: After a vertical takeoff, or when slowing down for a vertical landing, the airplane spends some time flying too slowly to be held aloft by the wings’ lift alone, but fast enough so that the aerodynamic forces on the wings and tails are significant. The interaction between the propulsion system and the moving airflow around the airplane is also significant. The propulsion system must provide some of the lift to keep the airplane flying, and both the propulsive forces and the aerodynamic forces are large enough to affect the lift and control of the vehicle.

3) Wing-borne or translational flight: In this mode, the airplane is flying like a conventional airplane. The engines are providing thrust to overcome drag, and lift and control moments are generated by the aerodynamic forces on the wings and other flying surfaces. 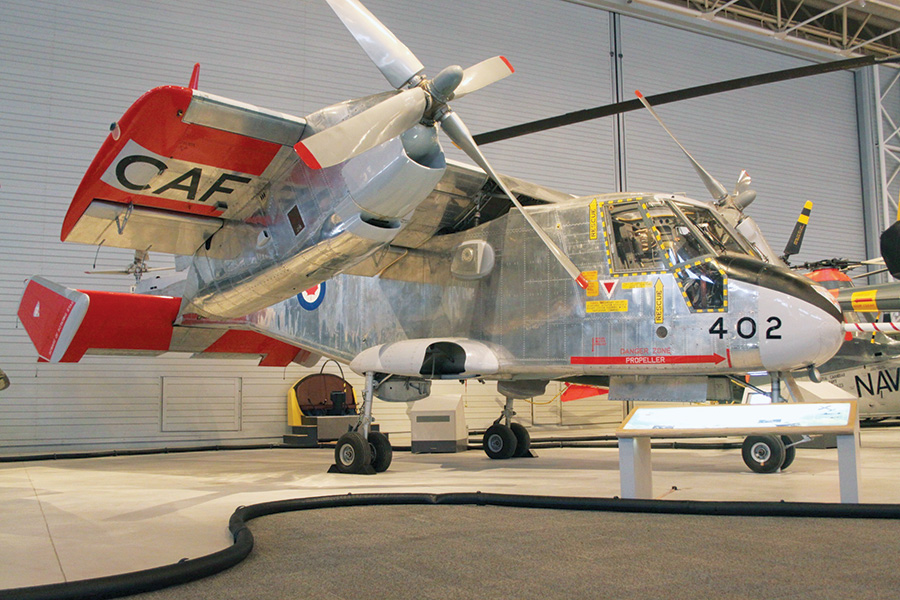 The Canadair CL-84 Dynavert tilt-wing showed that it is possible to build a VTOL airplane with an entirely mechanical flight control system. No flight control computer was used.

A major complicating factor in the design of a VTOL airplane is that, in addition to conventional airplane controls for wing-borne flight, it must have a separate control system for thrust-borne flight where the conventional airplane controls don’t work. This system must modulate thrust or direct thrust in such a way as to produce yawing, rolling, and pitching moments that the pilot can use to control the airplane in hover and slow flight.

There are many ways to achieve this, and the detailed implementation is very much a function of the configuration of the vertical-lift system.

The Harrier and some other VTOL jets use control jets or “puffers” at the wingtips and tail for control. High-pressure bleed air from the engine is ducted to the tips and tail. The pilot commands valves that control how much air is ejected at each point. The ejected air produces thrust that pushes up or down on the wingtips and tail, or laterally on the tail to control the airplane.

The V-22 Osprey tilt-rotor is controlled like a twin-rotor helicopter in hover. Cyclic pitch of the two proprotors is used to control pitch and yaw. For pitch, cyclic is used to tilt the tip-path plane of both rotors forward or aft, while for yaw, one rotor gets “forward” cyclic, and the other “aft” cyclic pitch. Roll is controlled by varying collective pitch on the two rotors differentially, increasing pitch on one, and decreasing it on the other.

One of the most remarkable VTOL control systems ever, both because of its complexity, and because it worked very well, was the system on the Canadair CL-84 Dynavert tilt-wing. In hover, with the wing tilted up, the CL-84 used differential pitch on its two props to control roll, much like the V-22. It had a horizontally-oriented tailrotor behind the horizontal tail that was used to control pitch, and yaw was controlled by the wing ailerons which were immersed in the slipstream from the propellers. All of these functions were controlled by a mechanical mixing system connecting the pilot’s controls to the airplane’s systems. No flight control computer was used. The mixing system was an amazing bit of mechanical engineering, since it not only provided control in hover, but could mechanically mode switch as a function of wing tilt, so the pilot had good control over the airplane in all three modes of flight.

Control in Transition and Mixed-mode Flight

As the airplane accelerates from hover, the aerodynamic forces rise proportionally to the square of the airspeed. The controlling forces available from the propulsive control system do not. If the hover controls are pure reaction controls like on the Harrier, their effectiveness stays constant. If the controls use mixed flow, like the yaw control on the CL-84, both the magnitude and character of the force generated by a control may change rapidly with airspeed. Both of these phenomena can be problematic for the designer.

In the case of reaction jet control, it is possible to get a situation where an aerodynamically induced moment is too large for the thrust of the control jet to overcome. The Harrier had such a problem. It is possible to command the airplane to fly sideways, or at high sideslip angles in thrust-borne flight. It was discovered that the airplane was laterally unstable in this mode, and at some critical airspeed the instability became strong enough to overpower the roll-control thrusters and the airplane would depart in roll. At low altitude this was unrecoverable, and there were several accidents caused by this phenomenon. The Harrier was subsequently fitted with a system that gave the pilot accurate sideslip information at low airspeeds, and strict sideslip limits were imposed during jetborne flight.

As airspeed increases, the aerodynamic controls also come into play. The control system must properly mix the “airplane” controls with the “hover” controls so that when the pilot moves the stick and rudder pedals, they command pitch, roll, and yaw in the expected way. This is not a trivial task. On modern military VTOL aircraft, this is done entirely digitally. The pilot’s controls send commands to the flight-control computers, and then the very sophisticated software running on the computers sends appropriate commands to the actuators controlling the control surfaces and propulsion system. While this works, it is complex, and very expensive to develop and test.

As we have seen with the CL-84, and earlier X-planes, it is possible to build a VTOL airplane with an entirely mechanical flight control system, but it is still a daunting task.

In slow translational flight the flow induced by the propulsive lift system can interact with the rest of the airplane in some powerful ways. These interactions can create large moments, particularly in pitch.

One common issue is the interaction between the downwash of the propulsive lift system, the outer airflow, and the horizontal tail. This is particularly true of tilt-wing and fan-in-wing concepts.

As the airplane starts to translate forward, the downwash from the propulsive lift system entrains air from the outer airflow and deflects it downwards. The good news is that this provides a “translational” lift component that helps hold the airplane up and reduces the power required to generate lift. The bad news is that this flow field induces a very high downwash angle at the horizontal tail. This downwash can have several unpleasant effects.

The first is that it can cause the lower surface of the horizontal tail to stall. If the tail is being called upon to provide a nose-up trimming moment at the time, the tail stall can cause an uncommanded pitch-down.

by an aerodynamic interaction between the fan flow and the wing itself that generates additional nose-up pitching moment in translating flight.

If the pitch-up is severe enough, it can become uncontrollable and cause the airplane to depart from controlled flight nose-up. This phenomenon caused the crashes of at least two VTOL X-planes. A milder form of this problem occurs when the pitch-up gets stronger with increasing airspeed, and the airplane runs out of nose-down control power to trim. It is possible to get a situation where the pilot cannot command the airplane nose-down enough to accelerate above a certain speed, and will become trapped at an airspeed too low to successfully transition to wing-borne flight.

As we have seen in the past three months, the problems of VTOL flight are not simple, and creating a successful VTOL airplane that can be flown with an acceptable level of safety is a daunting task. VTOL is a dream that will not die, so designers will continue to wrestle with these issues, seeking a better answer than we currently have. In the meantime, we can begin to understand why the helicopter, with all of its complexities and problems, persists as the most common type of VTOL aircraft in use today.