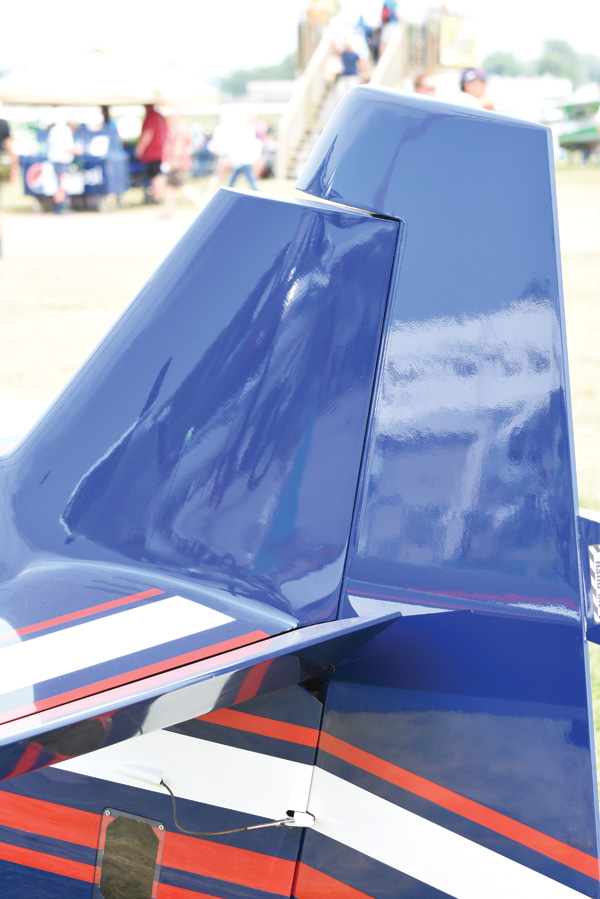 With an exposed horn balance, the leading edge is exposed directly to the airstream and has no fixed surface ahead of it.

There are two types of horn balances. The first type shown is the exposed horn balance. In this type of balance, the leading edge of the balance area is exposed directly to the airstream and has no fixed surface ahead of it. This type of balance was popular for ailerons during WW-I and for about 15 years thereafter. Simple horn-balanced ailerons, sometimes called “elephant-ear” ailerons were a feature of the Fokker Dr.I triplane and the Fokker D-VII, as well as the post-WW-I Travel Air airplanes. The horn-balanced ailerons on the Travel Air gave it a superficial resemblance to the Fokker D-VII. Since Travel Airs were easier to get than war-surplus Fokkers, they appeared as “German fighters” in several movies, leading to a nickname of “Wichita Fokker” for the Travel Air. 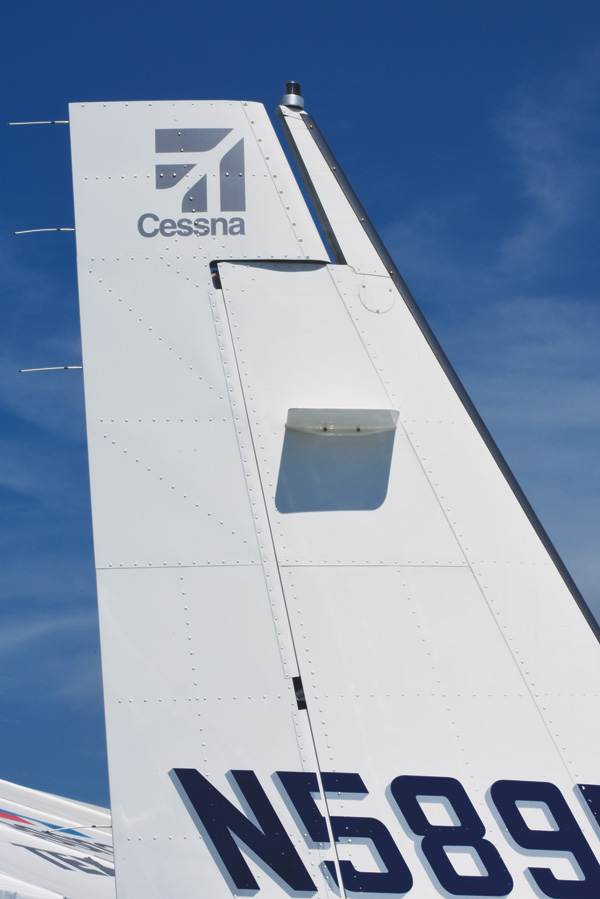 Shielded horn balances have a fixed surface ahead of the movable balance surface. They are common on the tail surfaces of modern light airplanes.

Aerodynamically, horn balances behave very much like offset-hinge-line balances with the exception that they have a much larger effect on the floating tendency of the surface. The exposed horn balance has a greater effect on floating tendency than the shielded balance because the leading edge of the exposed balance is directly exposed to the airstream, and can develop significant aerodynamic force in response to changes in the airplane’s angle of attack. The fixed surface ahead of the balance area on the shielded balance protects the control surface leading edge from the free stream at low control deflections, reducing the balance’s effect on floating tendency.

Like offset-hinge balances, horn balances will stall if the control surface is deflected too far. Unlike offset-hinge balances, the stall is not total. Only the surface near the balance horn stalls. The rest of the surface is likely to remain effective. Although the pilot will feel sudden changes in control forces and buffeting, he will probably retain control over the airplane. The effect of stall of horn balances is further reduced by the fact that the exposed balance tends to be a relatively low aspect ratio, so it can get to a higher angle of attack before stalling. 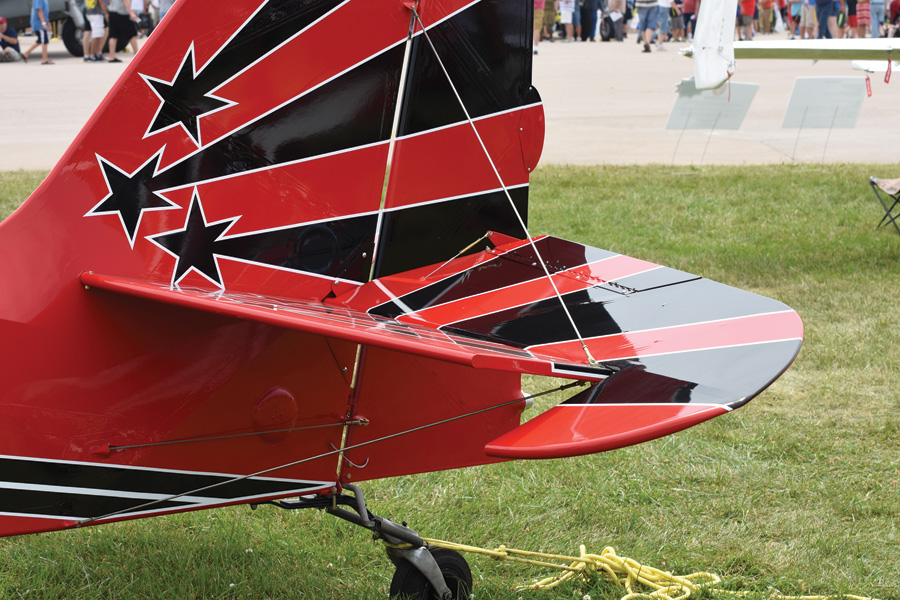 Horn-balanced control surfaces are less likely to destabilize an airplane than surfaces with no balance or an offset hinge line. This is particularly important for elevator design.

The horn balance has two primary advantages over the offset-hinge-line balance. The first is that the horn balance reduces the floating tendency more than the offset-hinge balance while having about the same effect on the restoring tendency. This means that a horn-balanced surface will float less and therefore destabilize the airplane less than a surface which has no balance or an offset hinge line. This is particularly important for elevator design.

The second advantage of the horn balance is that it is easier to build and hinge a horn-balanced surface than to provide an offset hinge line. A horn-balanced surface can be hung on simple hinges, while a surface with an offset hinge line must have more complicated hinges that are cantilevered a significant distance away from their mounting point.

A third advantage of horn balances is that the balance area can also house the mass-balance weights used to prevent the control surface from fluttering. This is very common practice in the design of light airplane elevators and rudders.

The primary disadvantage of the horn balance is that it is vulnerable to damage. The horn is exposed at the tip of the control surface and is therefore the first thing to be hit during the seemingly inevitable ground handling mishaps that cause hangar rash. This is a problem particularly if horn-balanced ailerons are used since wingtips are the first areas to get hit. The exposed nature of horn balances also increases the possibility that the surface can be jammed by debris lodging in the fore-and aft slot between the balance and the tip of the fixed surface. The fixed surface ahead of the balance on the shielded balance greatly reduces the chances of this happening.

A second disadvantage of horn balances, particularly if they are large, is that since they are cantilevered off of the end of the control surface they can produce relatively large structural loads on the rest of the surface. The designer who uses horn-balanced controls must take this into account when designing the movable surfaces. 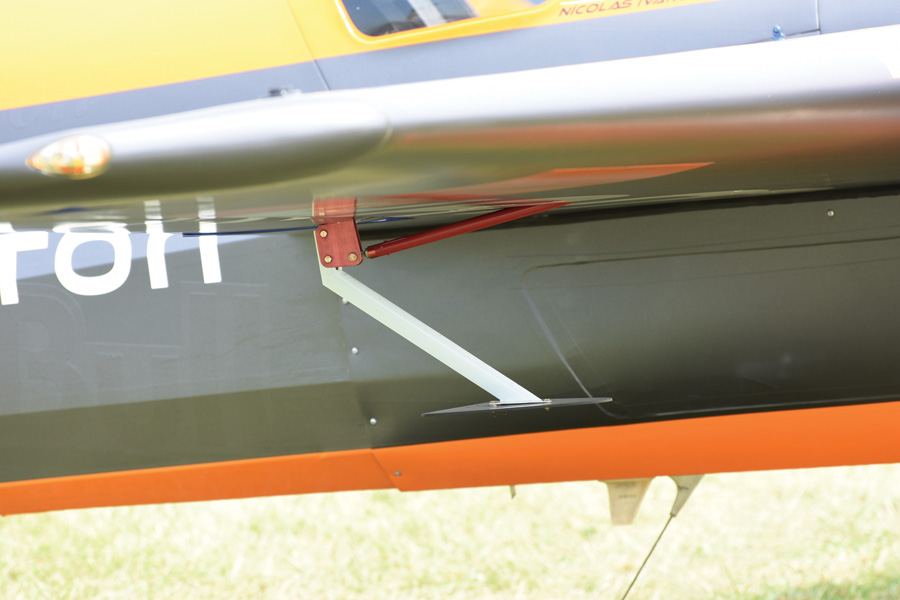 Paddle balances are the most common type of external-airfoil balance. They are flat metal plates suspended ahead of the aileron on a single support tube or strut.

An external-airfoil balance is a small surface mounted to the main control surface on struts so that the aerodynamic center of the smaller surface is ahead of the hinge line of the control. This type of balance has recently become very common on aerobatic airplane ailerons as designers attempt to reduce the aileron forces to improve roll performance.

The most common design is a flat metal plate suspended ahead of the aileron on a single supporting tube or strut. This type of balance is sometimes called a paddle balance, but are usually referred to as “spades” because of their resemblance to small shovels.

The primary advantage of the spade balance is that it is easy to modify to tailor the control surface’s hinge moment to the desired level. Both the size and planform of the spade affect how it changes hinge moment over the full range of control surface deflection. Modifying spades is one of the primary tools used to fine-tune competition aerobatic airplane roll performance.

The primary disadvantages of spade balances are their vulnerability and the drag that they produce. Because spades are exposed, they are relatively easy to damage in ground handling. This is offset by the fact that they are easy to replace or repair.

Spades add wetted area to the airplane, and the struts supporting the spade can produce significant drag. Because of this, spades are rarely seen on airplanes which are designed for fast cross-country performance. They are, however, quite common on aerobatic airplanes where proper tailoring of the aileron forces is much more important to good performance of the airplane mission than a small reduction of drag.

A secondary advantage of spade balances is that the struts supporting the spade can be used to hold mass-balancing weights to prevent aileron flutter.

When designing an airplane with balanced controls, proceed with caution. In general it is more dangerous to have control forces which are too light than too heavy. An airplane with heavy controls may not be particularly pleasant to fly, but unless the forces are so heavy that the pilot cannot move the controls, it will be safe. An airplane with excessively light controls will be prone to pilot-induced oscillations, and it will be easy for the pilot to exceed the airplane’s structural limits by an abrupt control input.

Another danger that must not be overlooked is control-surface instability, sometimes known as overbalance. If the aerodynamic balance is too large, or behaves nonlinearly, the control surface may have an unstable restoring tendency. This means it will tend to go hard over when deflected. If this happens, the pilot must fight the control to keep it in the neutral position. When this happens on ailerons it is known as “aileron snatch”. Control-surface overbalance is extremely dangerous and has been responsible for several fatal first-flight accidents. An airplane with overbalanced controls is, at best, difficult to fly and may prove to be uncontrollable.