In our continuing journey through the process of designing an airplane, we have reached the point where we have a preliminary configuration layout, have made initial estimates of the weight of the airplane, and have initially sized the wing. It is now time to turn our attention to where the mass of the airplane is situated and how the airplane is balanced. 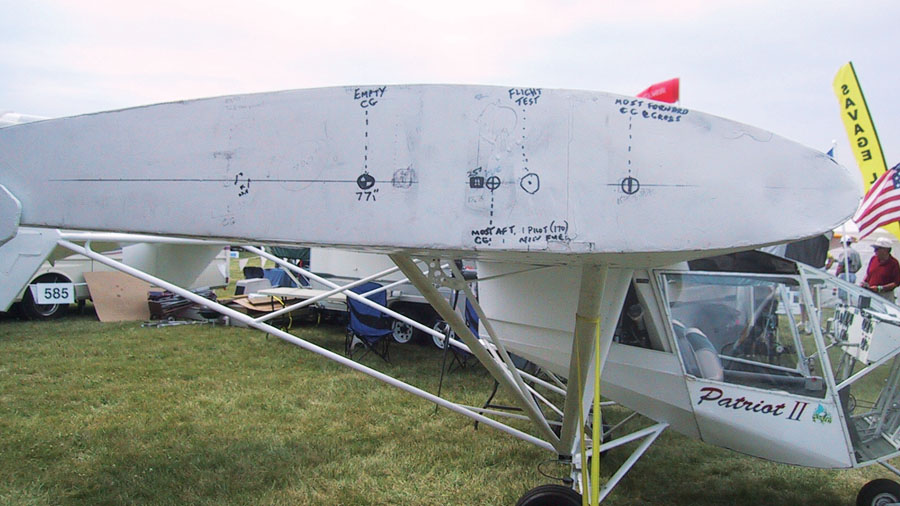 During flight testing of this prototype LSA, they actually marked the CG positions on the outboard wing tip rib.

When pilots do weight and balance calculations to evaluate the loading of an airplane before flight, they are looking to ensure two things: first, that the airplane’s gross weight does not exceed the maximum allowable takeoff weight, and second, that the CG is within limits.

Getting the airplane to balance requires the aerodynamic characteristics and the mass properties of the airplane to be properly matched. Both factors are critical to the proper balance of the machine.

The first consideration is the allowable CG range, which is determined by the aerodynamic configuration of the airplane. The allowable CG range is the range of positions over which the CG can vary while still maintaining safe flying qualities. The airplane is only flyable if the CG is somewhere between the aerodynamically determined forward and aft CG limits. Typically, the forward CG limit is set by trim and controllability considerations, and the aft CG limit is set by stability requirements. (These will be discussed in more detail in a future article).

When developing a new design, it’s important to start tracking its mass properties early in the design cycle. Balance is critical to a successful airplane. It’s vital to have a good idea of where the CG will be before defining the aerodynamic configuration of the airplane in too much detail.

Many mass properties factors are difficult to change and only get more so as the design progresses. This is because some of the major masses that go into the airplane do not scale and have relatively strict limitations of where they must be placed. For example, the engine of a conventional tractor single-engine airplane must be hung off of the front of the fuselage. There is a minimum allowable distance between the back of the engine and the firewall. Aft of the firewall, there is a minimum allowable distance from the firewall to the pilot’s seat. This sets the relative position of two of the heaviest things in the airplane. While it’s possible to move the engine forward with a longer mount, it can’t go any farther aft. Likewise, we can move the pilot aft relative to the firewall, but not forward. The CG of the fuselage structure itself will always tend to be at the same percentage of fuselage length back from the nose, and the tail, while it may vary in size and weight, will always be on the aft end of the fuselage. The designer has relatively little freedom in moving these major things around, so the first step in getting the balance of the airplane right is to calculate the CG based on the positions of the major masses as defined in our preliminary configuration inboard profile drawing.

We can then proceed to move items around to adjust mass properties and define the tail size and wing position to get a balanced design.

The overall goal is to end up with a configuration where the CG travels as little as possible between the possible loading conditions, and where all physically-achievable CG positions fall within the aerodynamically acceptable limits for safe flying qualities.

The most significant “empty” CG is at what is called “zero fuel weight.” In this condition, the airplane has no fuel, payload, or crew aboard, but it does have critical fluids like engine oil and any other potentially removable items that are carried routinely on every flight. This zero-fuel loading condition is the starting point for all other CG calculations.

It is highly desirable to have the empty CG be within the allowable flight CG limits.

As masses are loaded into the airplane, both the gross weight and the CG change. Early in the design process, the designer should calculate the CG position for a wide variety of loadings to determine the most forward and most aft CG positions to which the airplane can be loaded.

CG positions should be determined for pilot weight varying from the lightest to the heaviest pilots who will be flying the airplane. If the airplane has more than one seat, the loading conditions for multiple combinations of occupant weight and seat position must be considered. In addition to informing the designer of the possible CG travel, this information might also be used to define operating limits for the airplane. For example, in a multi-row airplane it’s not uncommon to limit the weight allowable in the back seat as a function of the front-seat occupant weight, or to require that the front seats be occupied before seating people in the aft row (or rows). It’s not reasonable, for example, to require a 3-row, nominally 6-seat airplane to be flyable with a just single 110-pound pilot and two 200+ -pound people sitting in the rear two seats.

In addition to considering various occupant configurations, we also need to evaluate these loadings at both full fuel and with empty tanks, since both of these conditions can happen in flight.

If the airplane has baggage capacity, then the effect of baggage weight must also be considered.

It is not only the initial (takeoff) position of the CG that is important. The CG can move in flight. The most common cause of this is changes of weight due to fuel burn or release of payloads. CG shift due to dropping of payload is very common on military airplanes, but some civilian aircraft (e.g., crop dusters, fire-fighting water bombers, sailplanes with water ballast, and skydiving jump planes) also drop significant masses in flight. For some airplanes, we also need to consider what might happen if masses move around in flight, as would be the case if a passenger decided to change seats in flight. One extreme case of this is with skydiving drop airplanes with aft fuselage doors. Prior to drop, the skydivers will often get up and try to all get close to the door so they can all exit the airplane close to each other. This moves the CG far aft. There have been accidents where this pre-jump movement of the jumpers moved the CG so far aft that the pilot could not maintain control of the airplane. The too-aft CG led to a pitch-up, stall, and spin.

For general aviation airplanes and homebuilts, the most common source of in-flight CG movement is fuel burn. It’s vital that the airplane remain within its allowable CG limits all the way from takeoff to empty tanks.

This has proven to be a problem in the past. There has been at least one case of a high-performance kit airplane that was configured with its primary fuel tanks in the wings and a header tank in the nose just behind the firewall. The fuel was pumped from the wing tanks to the header tank and then gravity-fed to the engine from there. The header tank was small enough that in normal operations it was never emptied. The fuel capacity of the header was about right to hold what would normally be considered reserve fuel, so for most flights the header tank remained full. Unfortunately, it was eventually discovered that when loaded with two large occupants, the airplane’s CG would actually move aft of the aft limit if the header-tank fuel was used. This meant that the fuel in the header was not realistically useable, since if it was burned in flight the airplane’s pitch stability would degrade to the point where it was unacceptably difficult to fly. In essence, the fuel in the header tanks was not really useable fuel—it was really flammable ballast.

Next month we will continue our discussion of balance with a look at how configuration and the position of various airplane components affect CG position and travel.

Paul Dye - August 13, 2021
1
I am often asked what it takes to fly many different airplanes, especially when...