One of the really frustrating things about the teaching profession is that you really have no way of telling if and when your efforts will ever bear fruit. And then you have Oshkosh ’15. I was sitting in the Kitplanes booth chatting with some readers when this fellow told me he’d been reading my stuff “for a while.” When I asked him how long that had been, he started quoting chapter and verse from the very first airplane article I ever had published, “The TSO’d Pencil,” from the AOPA magazine, August 1977. 1977—that’s nearly 40 years ago, and he’s quoting me verbatim stuff that I’d written and forgotten about a long time ago. 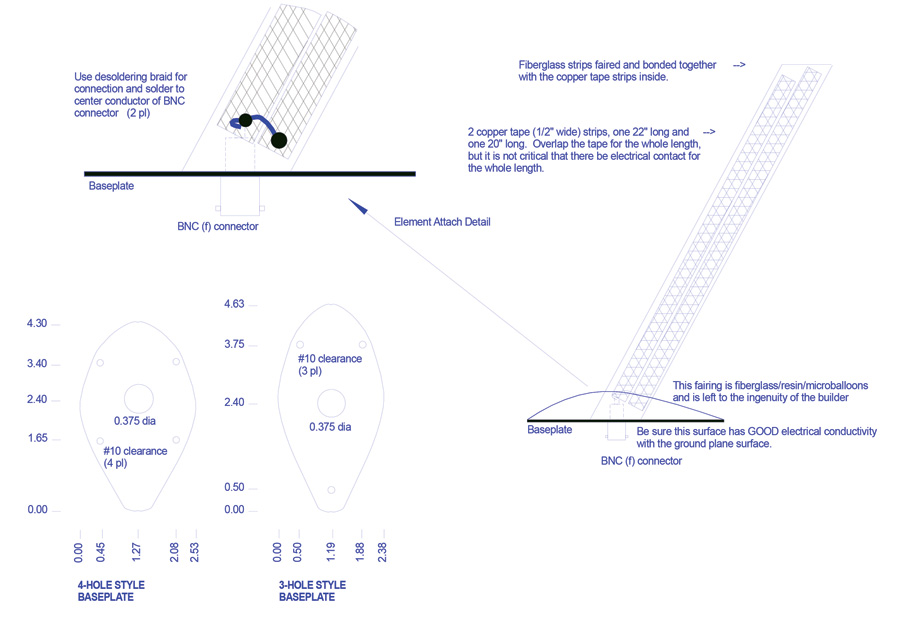 The original drawing from 1999 for a com antenna that is made from $2 in parts, yet performs as well as commercial antennas costing hundreds of dollars more.

So I get home and start answering my email and here is a letter from a fellow thanking me for writing an article on how to make a COM antenna for his RV-3B, and how he’d just made one, and that it turned out really well. I looked that one up and it was from the Kitplanes, November 1999 issue, over 16 years ago! Now, how’s that for a Weir two-fer coincidence within a week of each other? 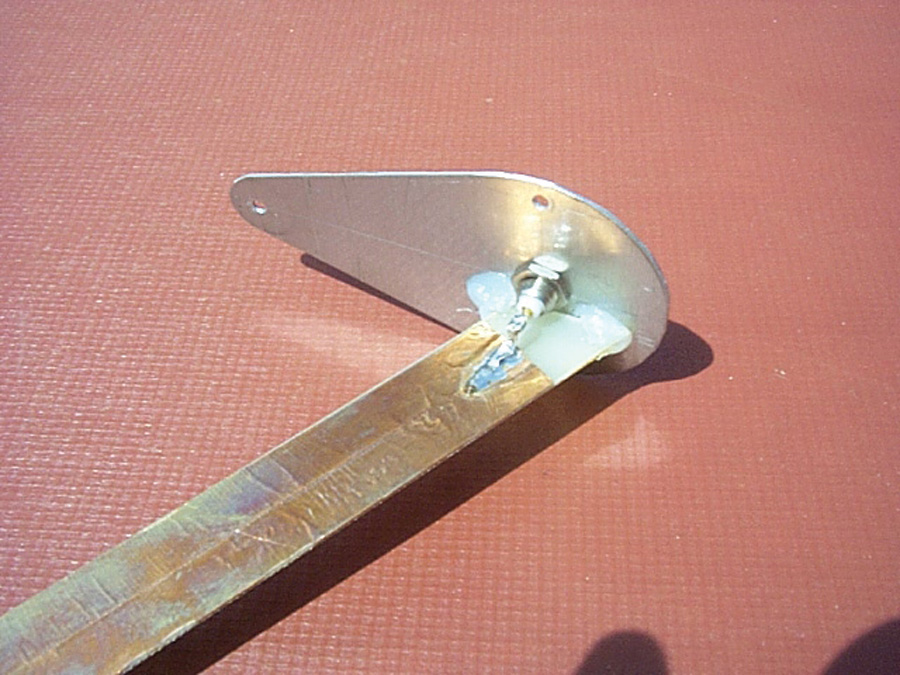 Close-up shot from 1999 shows the BNC connector soldered to the center of two -inch-wide strips of copper tape.

That got me thinking: Perhaps it might be informative to show you what I wrote and how I configured the project in 1999 and how Robin McKee, based at New Ulm Municipal Airport in Minnesota, took that article and manufactured his antenna for the RV last year. In addition, I’m going to include a brief report of recent test results, along with my test results from ’99.

The basic plan was to show how the copper tape antenna so widely used on composite (“plastic”) aircraft could be used on metal ships as well. To effect this plan, I proposed that we procure a long, narrow strip of fiberglass, cover it with a couple of strips of copper tape, and use it much as you would use any of the white com antennas sold at preposterous prices for metal aircraft.

The drawing shows the theoretical realization of this plan, in that it provided the fiberglass strip in conjunction with a metal mounting plate to which was affixed a standard BNC connector. The BNC connector center pin was soldered to the bottom end of the copper strips, and the strips were held to the plate with RTV caulking material.

To simulate a metal aircraft “ground plane,” four copper wires were covered with copper tape and strung out horizontally from the metal mounting plate. While it is true that we all believe that none of our children are ugly, this particular baby of mine was not in the running for cute child of the year.

Be that as it may, the tests we ran on the antenna showed it to be head and shoulders ahead of any of the commercial com antennas on the market and had been built for less than $2 (2015 prices) in parts.

Robin is evidently quite a craftsman, and a quick look at his aircraft should bolster that opinion. He took that ugly duckling of mine and transformed it into an absolutely beautiful white swan of an antenna. Not only that, but his tests exactly paralleled my tests and showed that what I had envisioned he had been able to construct.

He made a couple of very clever changes. In the first place, instead of using a piece of layed-up and resined fiberglass for the basic structure, Robin chose a couple of pieces of balsa wood for the structure. This allowed him to form the balsa into an aerodynamic shape that reduced the drag of the antenna sig-nificantly. Note on the left corner of the balsa that he carved out a notch for the connector to fit into. He then put the two copper strips that I showed on the drawing onto the surface of one of the balsa pieces and then sandwiched the copper tape into the balsa assembly. 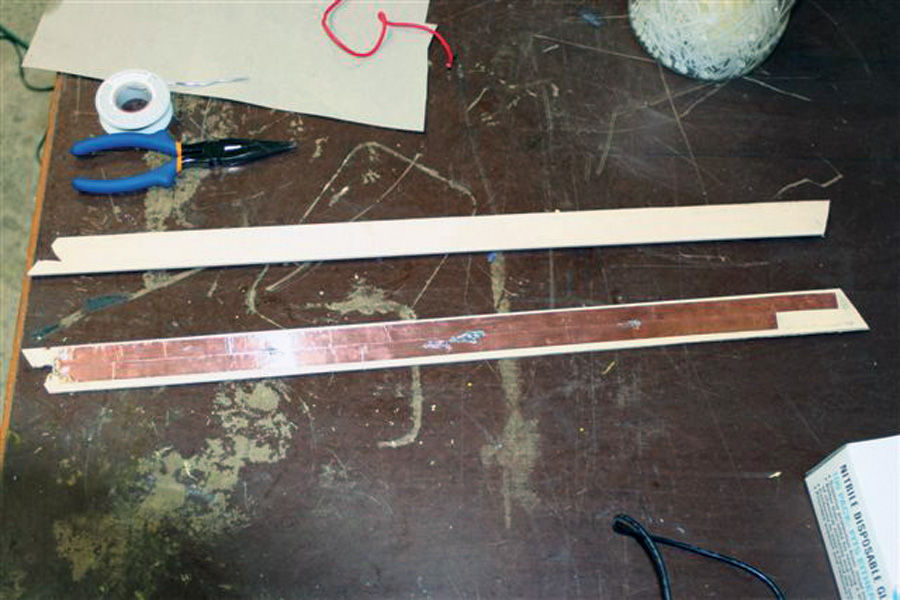 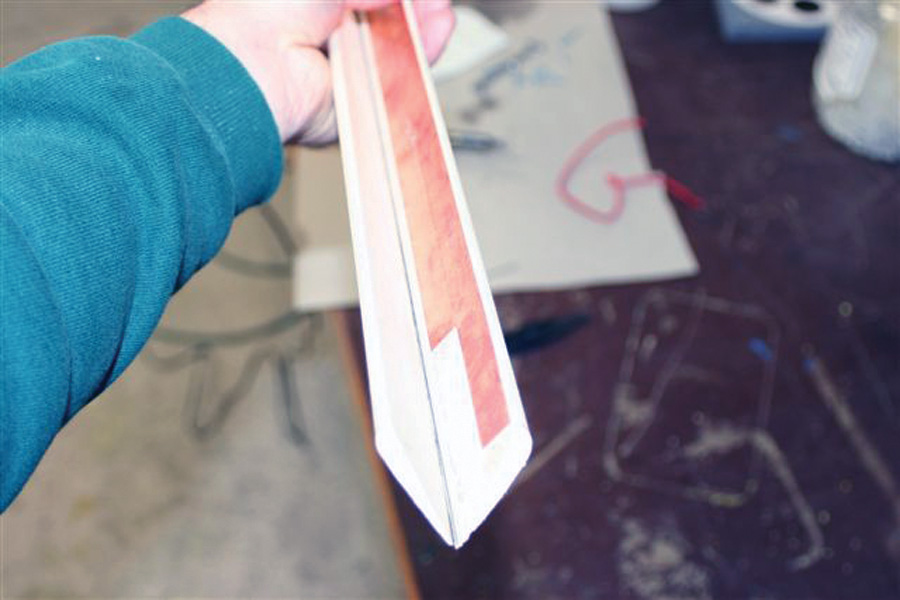 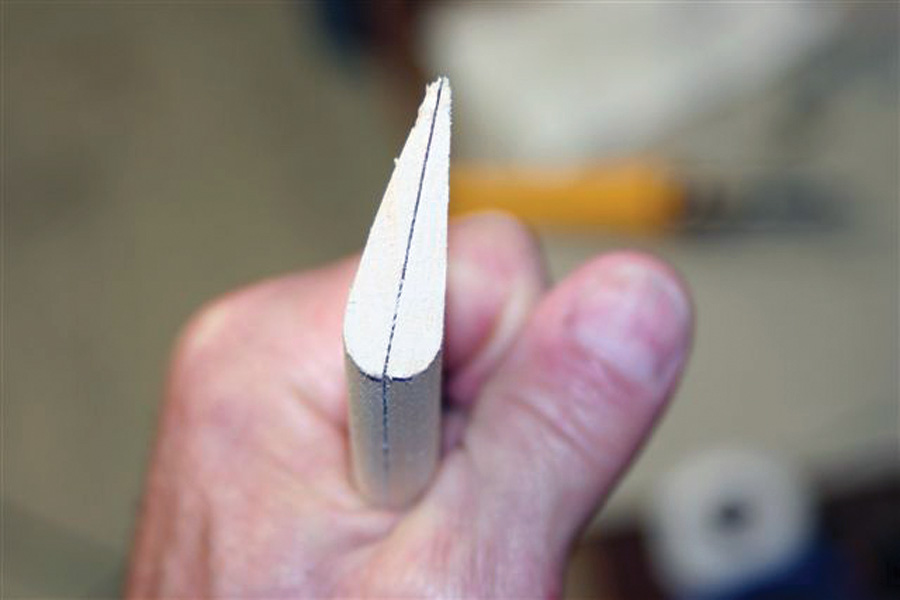 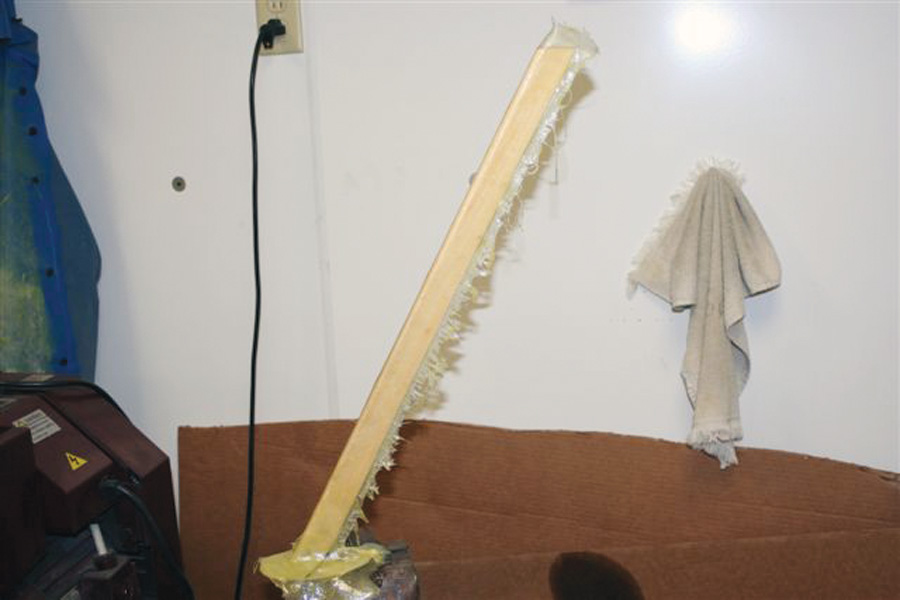 Com antenna with a coat of fiberglass. 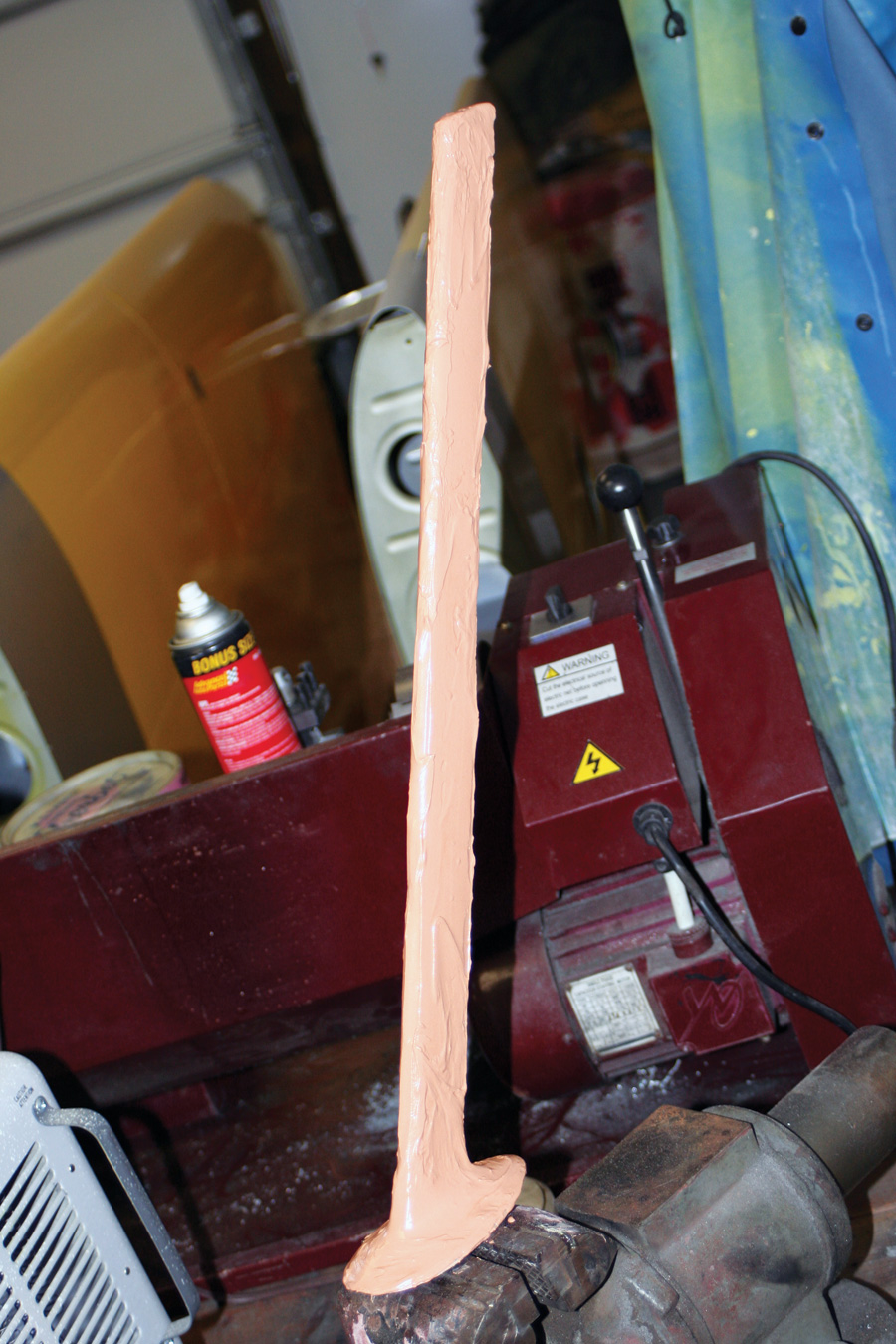 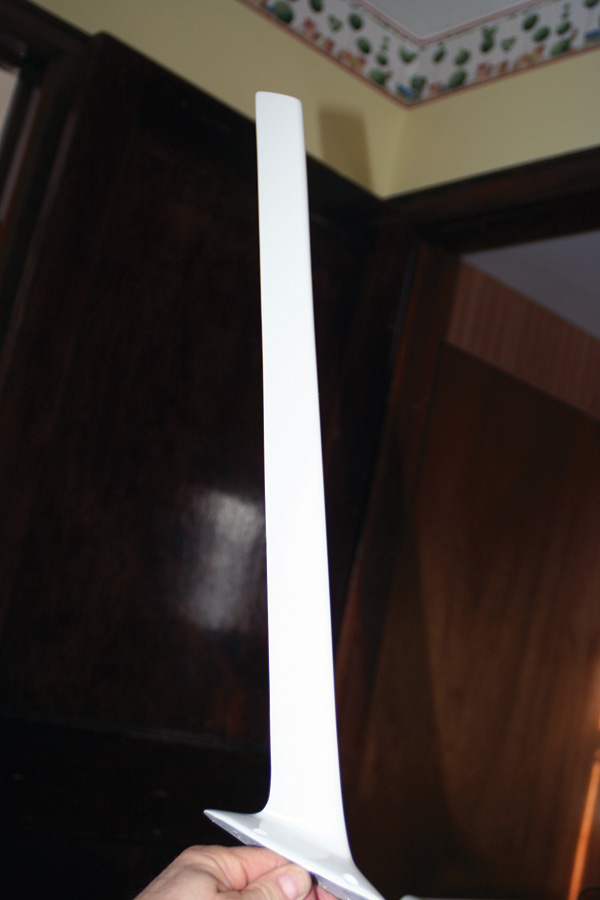 The finished antenna, ready for mounting. 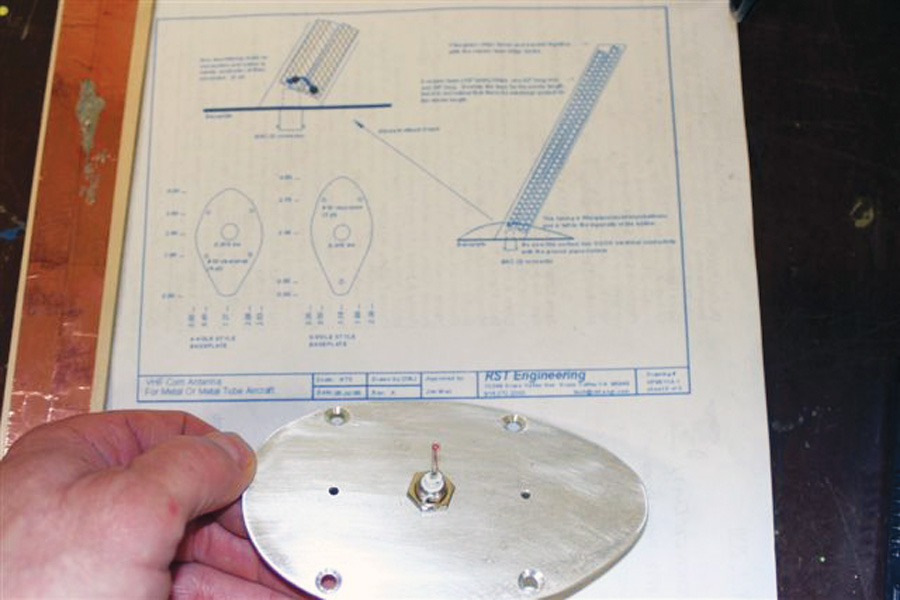 Making an antenna from plans. 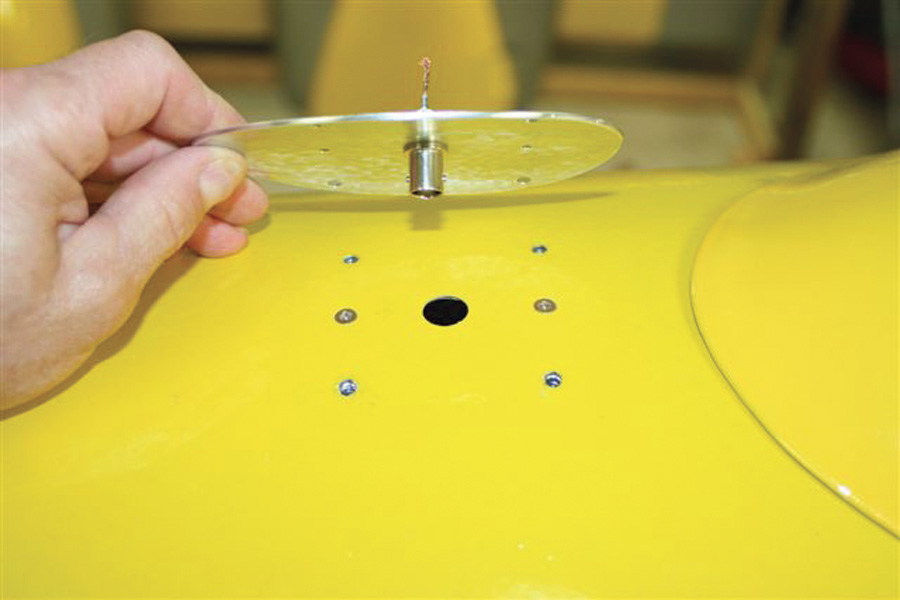 Mounting holes with inside plate attached. 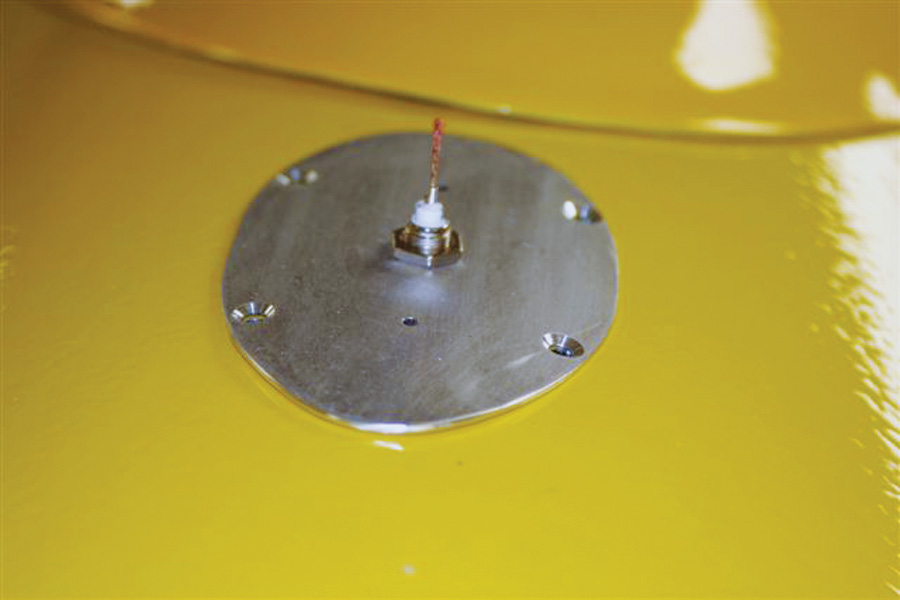 Fitting antenna base plate to fuselage. 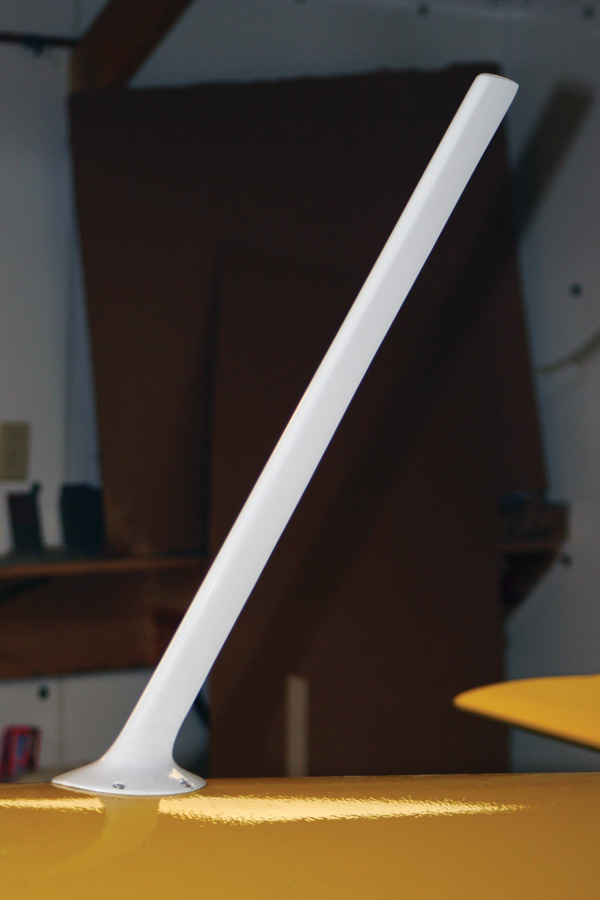 Finished antenna mounted on the RV-3.

He also formed the base plate to conform to the shape of his fuselage attach point. This also reduced drag from the flat plate that I used for my tests. Since it made not a whit of difference in the performance of the antenna, this was a mod that made the antenna truly unique to his particular airframe.

Once the baseplate was formed, with the connector installed and bolted down, the balsa-copper tape was soldered to the center pin of the BNC connector and then the whole assembly was fiberglassed together.

The rest is artistry. The antenna would have worked perfectly well at this point, but the craftsman always takes steps to make it pretty. Between fiberglass filler, sanding, painting, and generally cleaning the assembly up, Robin made a very handsome antenna that, from my eye, rivals anything you can find in any aircraft parts catalog.

The proof, as they say, is in the pudding. VSWR “goodness” tests of this antenna in the aircraft are exactly what I measured over 16 years ago. And, his comment was that 90-mile range was not at all uncommon when he test-flew the antenna. 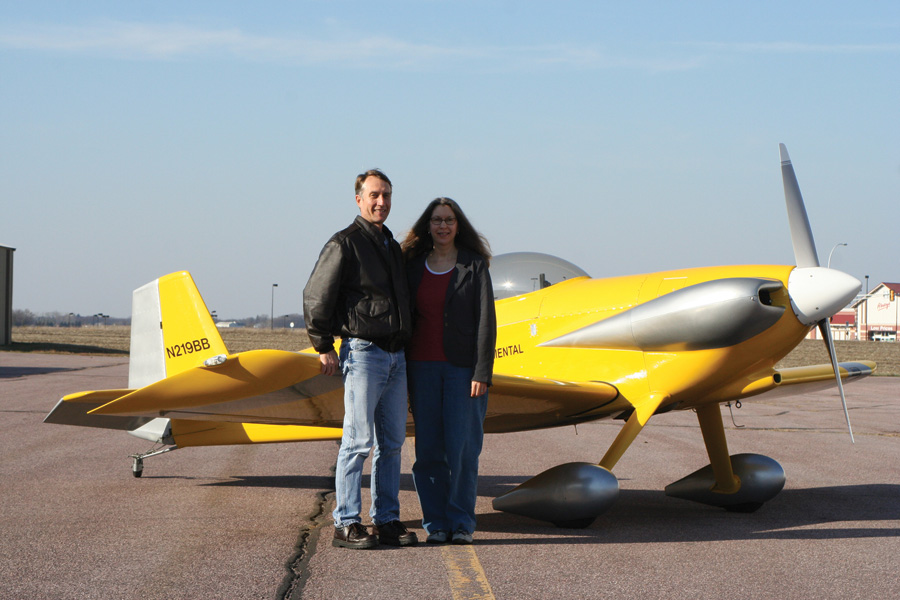 Robin and Barb McKee and the completed RV-3.

My only conclusion is that Robin could have ordered an antenna from any one of a dozen vendors, spent on the order of $200 to $400 on the product, and not had as good a result as he got for $2 in parts.

Given this conclusion, I make this offer to Kitplanes readers: Tell me about the antenna or other fairly simple product you want for your homebuilt, show me a commercial example, and if I think I can do it for less than half of what you would spend, I’ll feature it in a Kitplanes article. The caveat is that if I design it, you must build it and report your results back—along with photos showing your craftsmanship and your results. Until then, stay tuned.