So far, we briefly discussed the current driver for our LED nav lights and sort of glossed over the LED landing/taxi lights. It has come time to dive deeply into the theory, and even more interesting, the practical way of making these drivers. Part and parcel of this fabrication will be a fairly detailed explanation of how to make printed circuit boards for the drivers, so that you can truly fabricate a professional set of lights in your own shop. This is the first part of a two part series: This month we will design and lay out the PC board, and next month we will see that there are a few ways of making a PC board to actually build the circuit. 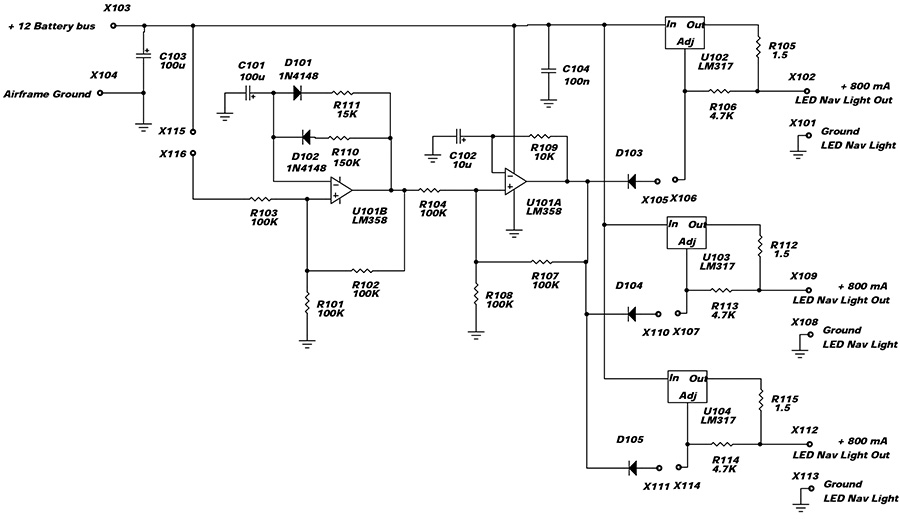 I’m sure you recognize the schematic as a modification from last month’s circuit of a voltage regulator turned into a current source. You may remember that there is an internal precision voltage regulator inside the LM317 (“317”) that keeps the voltage from the output terminal to the reference terminal exactly 1.25 volts. Given this precise voltage, a precise resistor will give a precise current output. (Ohm’s law guarantees this last statement: I = E/R.) Since the precise voltage of the 317 is 1.25 volts, a precise resistor of 1.5 ohms (“1.5Ω”) gives a precise current of 833 milliamperes (833 mA or 0.833 amperes).

Since our nav light LEDs from last month need a nominal 800 mA to operate, this seems to be just about perfect for our purposes. Yes, a resistor of 1.5625Ω would give us a perfect 800 mA, but you can’t buy this value—1.3, 1.5, and 1.6Ω are the options. So, given this configuration, let’s do what we call a “worst case” analysis. The precise voltage, which is constant over temperature, time, and load current is nominally 1.25 volts, the actual precise unvarying voltage can be anywhere from 1.2 to 1.3 volts, or a variation of 4%. Together with the resistor’s tolerance of 5% gives a possible swing of 9%. This will give a current of a possible 910 mA high current or 760 mA low current. Looking at the data sheet at www.ledengin.com for this device shows that it can accept up to 1000 mA at reduced life expectancy, so if our components err on the high side, we may only get 15 of our 2000-hour overhauls (30,000 hour) life out of our LEDs, and if they err on the low side, there is no projection as to how high that 30,000 hour nominal life can go.

One thing we should check on is how much heat each of our devices will have to get rid of. If each of our LEDs drops about three volts, then two of them in series as shown will drop about 6 volts. With 0.8 of an amp going through the series string, each LED will dissipate 2 watts in accordance with Ohm’s Law: P=E*I. That’s 5 watts for the two LEDs and, depending on your geometry and mounting plates, that shouldn’t be too difficult. Similarly, if we presume a 14-volt battery supply, if 6 volts is dropped across the LEDs, the remaining voltage (14-6) of 8 volts will be dropped across the 317, or about 5 watts for the IC, which again we will try and take care of with PC board copper and chassis aluminum. 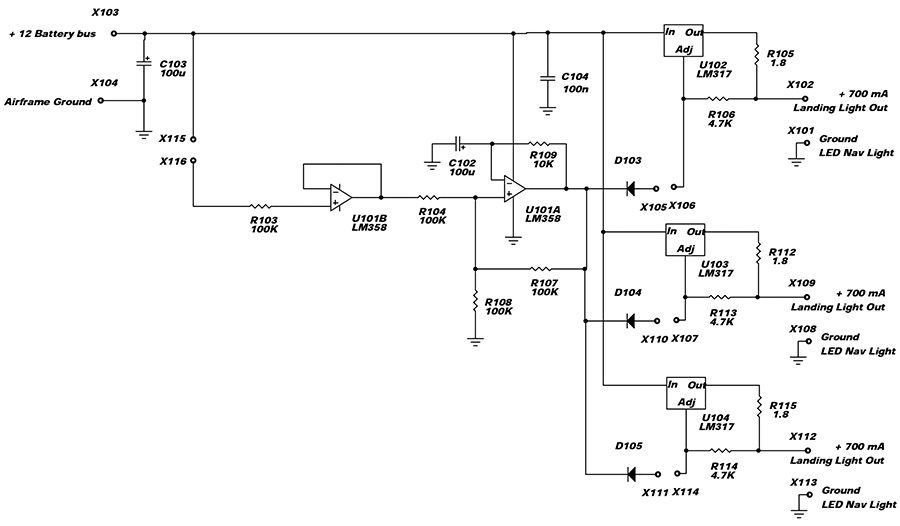 Note that the landing light circuit is nearly identical to the nav light circuit; we just eliminated the parts that do the rapid flash.

So, on to the landing light. Here we have 9 LEDs in a single package about the size of a pencil eraser. They are connected in a configuration of 3 LEDs per string, 3 strings to the package. Because of the large number of LEDs in a small space, the manufacturer (www.ledengin.com) has derated the LEDs to 700 mA, which shouldn’t present too much of a problem until we get to heat.

The conversion of the 317 to a 700 mA current source is exactly as before…a 1.8Ω resistor will provide almost exactly 700 mA of current flow to the LED 3-lamp string. Again, the worst-case calculations show a maximum of 760 mA and a minimum of 640 mA per string of LEDs. The power dissipation in one of the strings is given approximately by multiplying the voltage drop of all three LEDs in one string (about 9 volts) times the current in the string (700 mA) or 6.3 watts. The whole package will dissipate 3 times this, or about 19 watts. Now that is a slug of power that will take a decent-sized heat sink to get rid of.

However, the IC has now not much heat to worry about. Each driver will be dissipating about (14-9) 5 volts at 700 mA, or about 3 watts. If all 3 ICs are on the same heat sink, that’s just a bit over 10 watts, which is not a lot of heat to get rid of…about half of what the LEDs themselves are dissipating.

Now let’s see what trickery and sleight of hand is going to do for us. First, as we saw last month, in order to get the heat out of both the LED and the 317, we are going to have to thermally connect them to a heat sink of some sort, yet electrically isolate them from the sink if it is grounded (which it should be). This involved a “TO-220 mounting kit,” which consists of a very thin mica washer between the 317’s metal backside (conducts heat, doesn’t conduct electricity), a fiber shoulder washer to insulate the mounting hardware from the 317’s mounting sink, and the usual nuts and bolts for fastening. Also, it involves some “thermal grease” that fills in the microscopic voids between the metal backside, the mica washer (both sides), and the heat sink surface.

Trickery #1—Zinc oxide from the drug store works every bit as well as the thermal grease from the electronic store, at about one-tenth the price.

Trickery #2—Instead of all that mica washer and shoulder washer tomfoolery, a few manufacturers produce a 317 that is not the LM317N version with the exposed metal tab, but an LM317P (for plastic) version that has the insulator and shoulder washer fabricated right onto the IC as it comes from the factory. For the dime difference in cost, not having to fool with slippery washers when bolting these ICs to the heat sink is worth it to me. Tip—If you want to use a lock washer during installation, put a flat washer between the lock washer and the 317P body.

Trickery #3—If we play our cards right during the PC board design for the drivers, we can use unoccupied copper on the board as part of the heat sink. 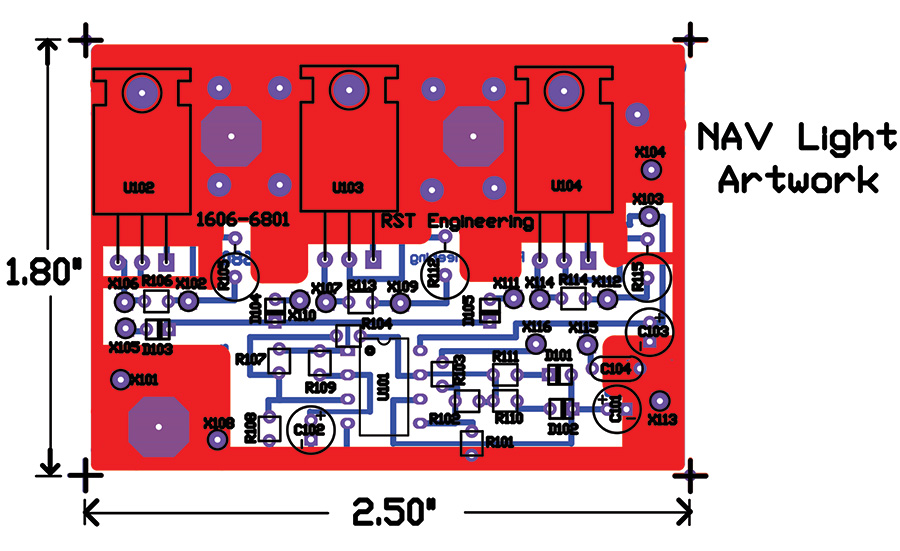 Teaser for next month: This is the PC-board layout that we are going to produce to fabricate the unit.