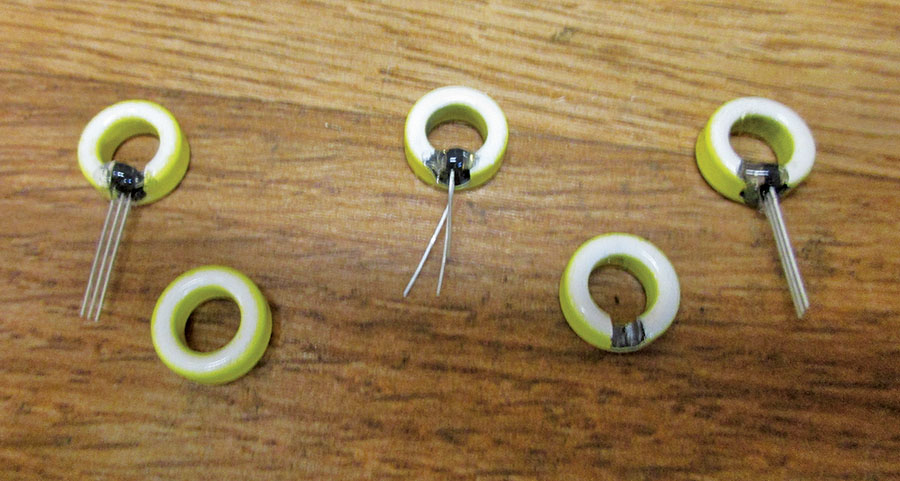 A couple of months ago, we started talking about digital voltmeters, ammeters, and loadmeters. What we found was that the old-fashioned pointer type voltmeter/ammeter/loadmeter was not only obsolete, but was actually way overpriced for what it did. I showed you a really cheap way to take a digital loadmeter that required a shunt in the negative lead, which was non-trivial for metal aircraft, and make a regular positive shunt to power that same meter with only a few small parts.

Here we go with a couple of improvements on that theme. The original problem is that we required a wire shunt that would possibly get hot and melt under extreme conditions, and we had no way for our loadmeter to indicate that not only was the alternator not alting, we were actually running on battery power.

This is perhaps the most sophisticated project in 20+ years of this column. And I understand that some of the components (primarily the ferrite toroid inductor) may be somewhat difficult to find on the open market. They are not expensive, but that is part of the problem. The ferrite inductor is less than two-bits. The Hall effect sensor is half a buck, but the shipping in onesies is going to kill you. For both parts. Give me some time, and I’ll try to work out a solution for your parts problems. 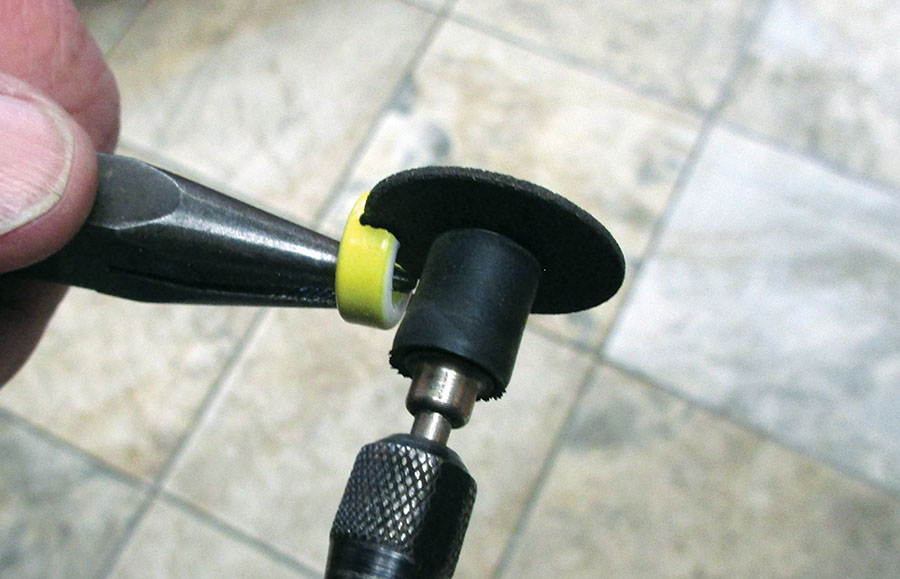 Cutting the notch into the ferrite toroid with a motor tool and cutoff wheel.

Let’s worry about the design for right now.

A ferrite toroid (L101 on the schematic) is a donut made out of iron powder and some “magic dust.” The combination of powder and dust makes a mixture that is nearly lossless to an electrical signal. For example, if I pass a wire that is carrying current through a toroid, a very small amount of the magnetic field surrounding that wire begins to circulate through that toroid—so small an amount of the field that it takes a really sensitive instrument to measure that field.

But there is a really sensitive part called a “Hall effect” sensor (named after Edwin Hall, who discovered the effect in 1879) that will respond to that tiny field, and with today’s semiconductor wonders, we can amplify that effect and measure the amount of current that the wire is passing through the toroid with virtually no effect on the current itself.

This may seem like electronic abracadabra, but I assure you that it is the truth. We can make Hall effect semiconductor sensors that take minuscule magnetic fields and turn them into workable voltages that we can use to measure those fields. Indeed, remote compasses use Hall effect sensors to measure the earth’s magnetic field and drive the instrument on the panel that tells us north from south. The story goes that the Tate’s Compass Company once designed a Hall effect compass but accidentally reversed the wires so that north was south and east was west. That led to the saying that “He who has a Tate’s is lost.” Ahem. 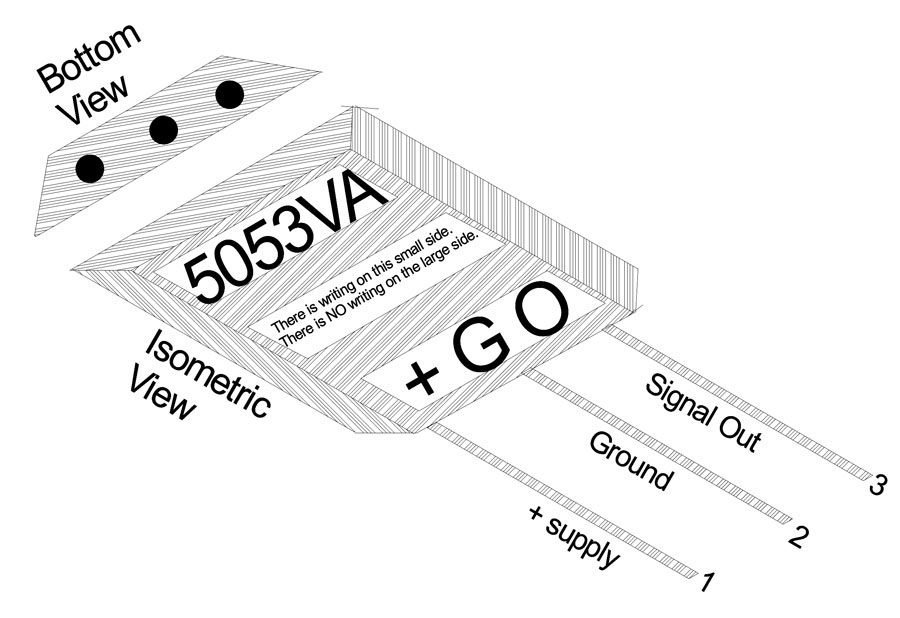 A much enlarged drawing of the Hall sensor. If you confuse the power-in lead (#1) with the output lead (#3) you will instantly destroy the sensor. Ask me how I know.

Somehow you have to get the Hall effect sensor into the magnetic field of the toroid. This is not a trivial problem. There are several ways of doing it since ferrite is a relatively soft material. You can use a drill (carefully since ferrite is soft but somewhat brittle) or a Dremel tool in either grinding or cutoff-wheel mode. The idea is to cut the toroid nearly in half to put the Hall sensor into the center of the toroid, but do not cut the toroid in half. All bets are off when the toroid “magnetic path” has been totally disturbed.

Hot glue serves to hold the sensor into the toroid, but you can use epoxy, Gorilla Glue, or white glue if you wish. Electrically it makes no difference.

Once the sensor is into the toroid, now we can turn to the electronics of the problem.

First you need to pass a wire that you feel capable of passing 50 amps of current through the center of the toroid—in the right direction. The images show the positive wire passing through the white side of the toroid and the face of the Hall sensor glued to the right side of the toroid. Don’t worry too much if you mess up and do things backwards. You can always reverse the direction of the main wire to make the backwards go to forwards.

All this mickey motion with U101 and U102A are intended to give the 75 millivolts that the digital loadmeter requires to give an accurate readout. R105 is used to give zero volts output for zero current through the toroid. Hint: Use R105 to give a “flicker” signal between zero and 1 amp on the digital loadmeter to be sure you are on the “positive” current side of the meter. 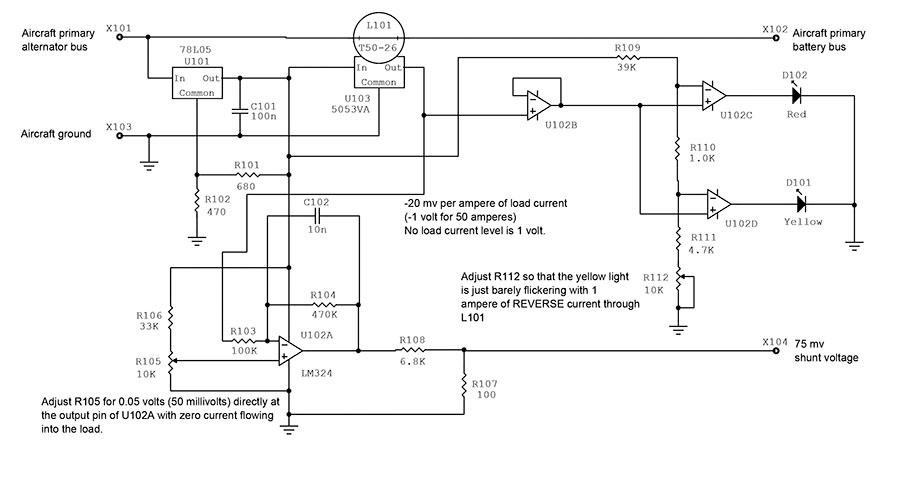 The schematic of the Hall sensor circuit.

R112 is used to convert the loadmeter to a “sort of” ammeter. U102C and U102D are the failure mode indicators of the alternator. As the schematic says, the no-load current of the Hall effect voltage sensor is 1 volt. Current goes one way, voltage goes down. Current goes the other way, voltage goes up. In particular, if the alternator fails and the battery starts driving current back through the toroid, the sensor output will increase in voltage. U101C and U101D are connected as reverse current indicators, and D101 (yellow) will indicate when the alternator has failed and approximately 1 amp is being drawn from the battery. D102 will light up at about 5 amps. This indication is that the alternator has failed, and the aircraft is operating strictly on battery power.

The falling voltage on the voltmeter should have given you an idea that something is wrong, but there is nothing wrong with a caution and a warning light to emphasize the point.

This, as I said, is the most sophisticated article I’ve written for KITPLANES. Not even the GPS antennas 10 years ago were this complicated. But I’m getting a fair amount of fan mail saying, “Gee, love reading your articles, but I don’t have a clue what they mean.” Tell you what. Every now and again, I’m going to write an Electronics 101 article where I tell you what each of these little electronic parts do. Like next month, “Diodes for the Technically Challenged.” Until then…Stay tuned…

Ishmael Fuentes - March 11, 2010
0
Choosing a prop for your homebuilt is always a compromise that involves consideration of cost, performance, how you'll fly and more. Still, sometimes the simplest solution is the best one.