All the high-tech flight instruments wont help much if the basic pitot-static system contains inherent errors. Read the story to learn how to find them.

Most owners of amateur-built aircraft are interested in knowing how well their airplanes perform, and airspeed is an important parameter in all types of aircraft performance measurement. But aircraft pitot-static systems have many possible sources of error that may affect indicated airspeed and altitude. Thus, before using your indicated airspeeds to determine performance, it would be wise to determine what the error is in the airspeed indication system. 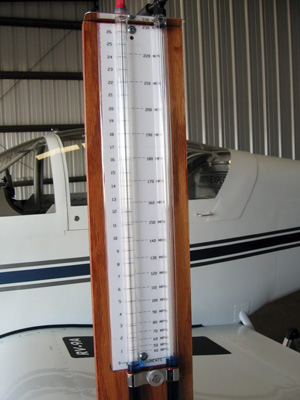 The pitot tube will give accurate readings as long as it is well clear of the prop wash, not in the boundary layer, not in the wake of some projection and aligned with the local flow within about 15 (maybe to 20 for pitot tubes made from tubing, according to NASA-Reference Paper-1046, Measurement of Aircraft Speed and Altitude). This condition may be violated at high angles of attack, which is one reason most airspeed systems read low at the stall. 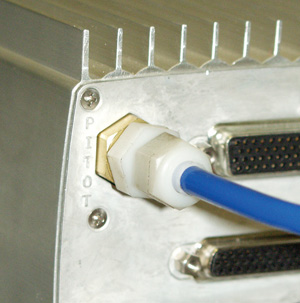 Pitot- and static-line connections to instruments, whether conventional or to external AHRS modules, need to be leak free to ensure accurate airspeed readings.

Generally, a leak-free pitot system will be error free, except near the stall, where there may be a large angle between the local flow and the pitot tube. Airspeed errors away from the stall are likely due to the static system or ASI error.

The airspeed indicator is subject to instrument error and should be calibrated. See Maintain thy airspeed, lest the ground rise up and smite thee by Jim Weir, February 2009 KITPLANES for details on how to use a homemade water manometer to calibrate an ASI. Note: The data tables in that article are in error. See How to calibrate your ASI, Jim Weir, July 1989, for correct tables of ASI reading versus water manometer height. Or, use the asi_cal.xls spreadsheet listed in Resources.

How to calibrate your ASI (KITPLANES July 1989)

Large companies use various methods to measure static source error, but most require expensive equipment and/or dedicated ground support personnel. But the long-established speed course method has seen a renaissance due to development of inexpensive GPS units.

The speed course method relies on the following assumptions:

Thus, the difference between CAS and IAS, once we account for ASI error, must be due to errors in the static source. In days past, the TAS needed for this method was determined by timing two-way runs past ground reference points, using a stop watch. This required flying in the early morning to find smooth air at low altitude. The advent of GPS allows the speed course method to be flown in the smooth air we find at altitude. We will determine TAS as described in Finding TAS from GPS Data in the August 2009 issue of KITPLANES.

These ground-test items must be completed to validate the assumptions:

Typical small altimeter instrument errors are not critical for this test method, but if there is any question about the serviceability of the altimeter, it should be checked by an instrument shop.

The flight testing must be done in smooth air. The test technique assumes constant wind direction and speed, so avoid testing during weather conditions that may give wind shifts such as those that occur near cold or warm fronts.

Fly four legs at a constant heading, altitude and airspeed. The run directions should be about 90 a part. All runs must be at exactly the same airspeed, but the altitude may be varied 50 feet of the target if required to obtain exactly the target airspeed. For each run, record:

Allow time for the GPS speed and track indications to stabilize before recording data.

The more accurately you can fly the test points, the more accurate a result you will obtain. If possible, it is useful to have a second person in the aircraft to record the data accurately and watch for other traffic.

The next article in this series will present actual flight-test data from a static system position error flight test on the authors RV-8. The data will be analyzed using a spreadsheet to determine the airspeed and altitude errors resulting from the static system position error. Meanwhile, your homework assignment is to do your own ground and flight testing, so that you have some data ready to analyze when the next issue arrives. 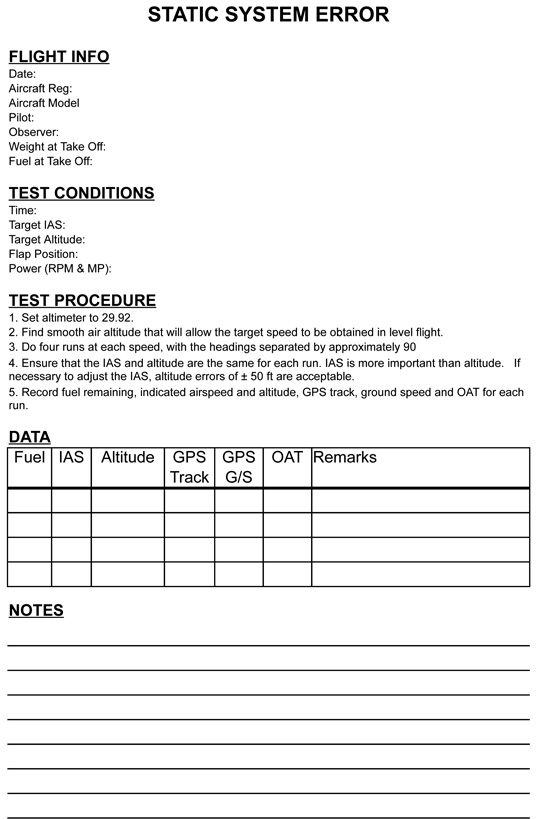